The pub complex of Orizuru Kaikan offers a unique array of Japanese standing pubs for you to enjoy, and we went and experienced a night of drinking the Japanese way!

Some of you have told us that we don’t have enough information about night life in Kyoto. And so we (well, I) decided it was time to go to the deepest heart of Kyoto, Orizuru Kaikan. In English this place would be called The Hall of the Folded Crane, which sounds totally awesome, and the place like its name is just awesome.

All the people at Orizuru Kaikan were so friendly, from the chefs to the patrons of the establishments. Talking with the regulars was a big part of the fun, but you don’t really need to know much Japanese to get along. “Kampai!” should be enough for a start!

Orizuru Kaikan is really close from Hankyu Sai’in Station; I don’t think it even takes a minute from the nearest exit. So with perfect access, reasonable prices, and great people, Orizuru Kaikan should be your first choice for a night out in Kyoto! (If you want to experience something different)

So, the night was young and I and my college Vanessa were ready for some beer and deep fried garlic. 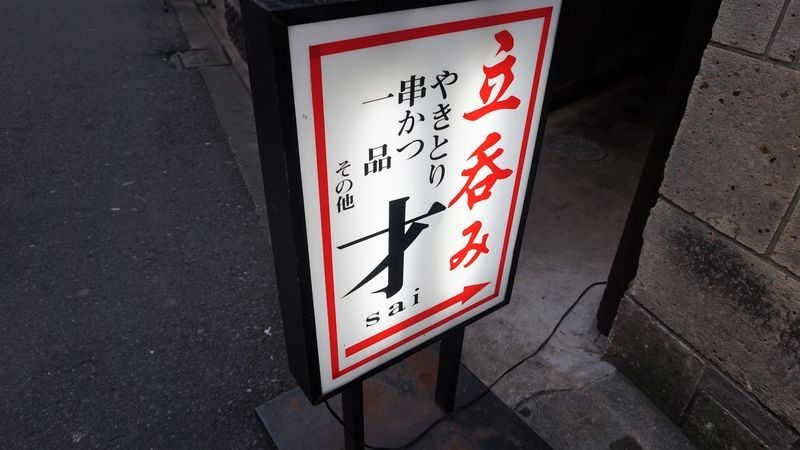 First on our agenda we had Sai, a yakitori place famous for their chuhai shochu highballs, and the array of different tastes they have. 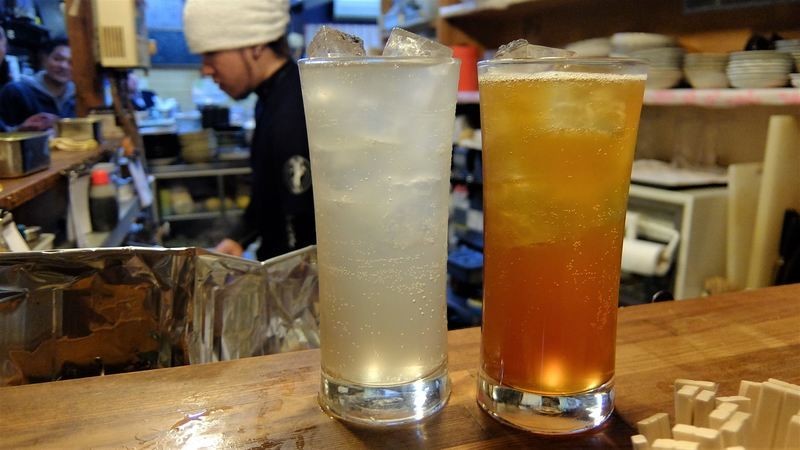 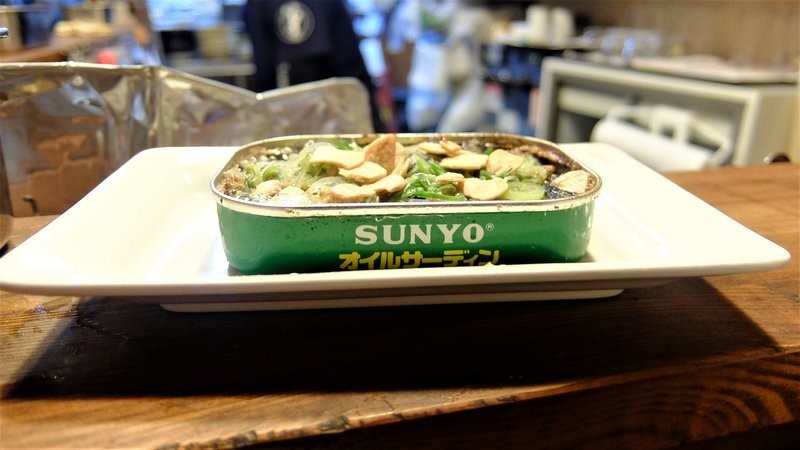 Canned sardines, presented in a sardine can. Could you already describe this as kitsch? The presentation goes over the top, trying to appear carefree while it is in fact not and careful thought has gone into this dish. The sardines were fried perfectly and the fried garlic tasted as great as fried garlic usually tastes. 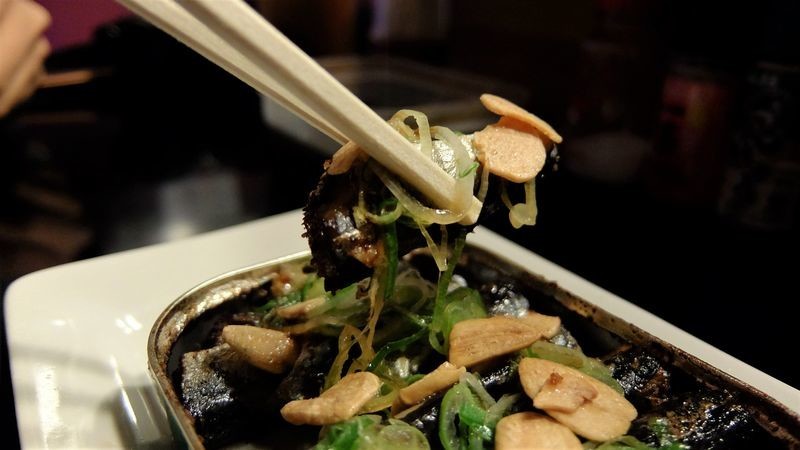 It’s not that rare to have canned sardines at places like Sai, but for them to be this good is rare. Maybe that is the biggest difference between Kyoto and Osaka, even here at Orizuru Kaikan, just that the food in Kyoto often tastes a bit better, but you get more for cheaper in Osaka. 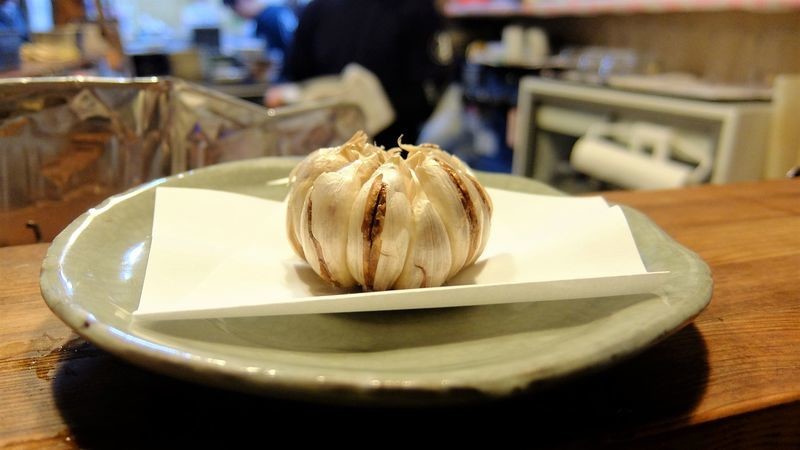 Here we have a Sai specialty: a whole head of garlic deep fried. Doesn’t sound that enticing but especially when eaten together with Sai’s hot sausages it’s a taste you won’t forget. Recommended for those who don’t have work the next day. 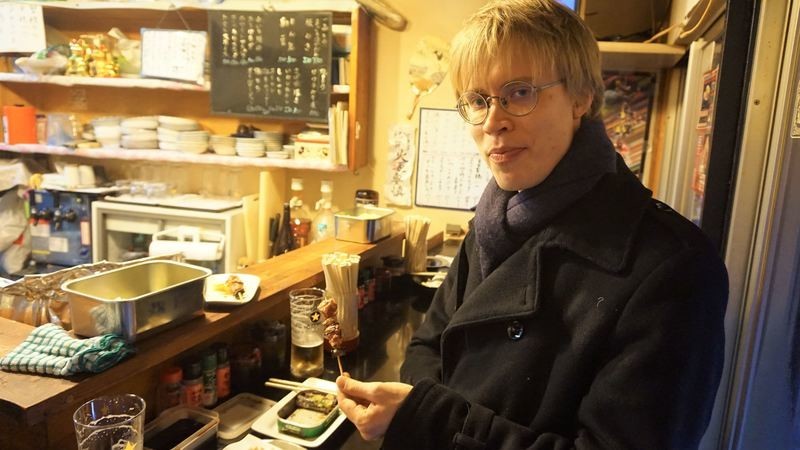 Not to forget their yakitori, which was one of the best I have had in a while. It was so juicy and the teriyaki sauce on them makes you want to get a second one. But it was time to go on, to the next tachinomi standing pub. 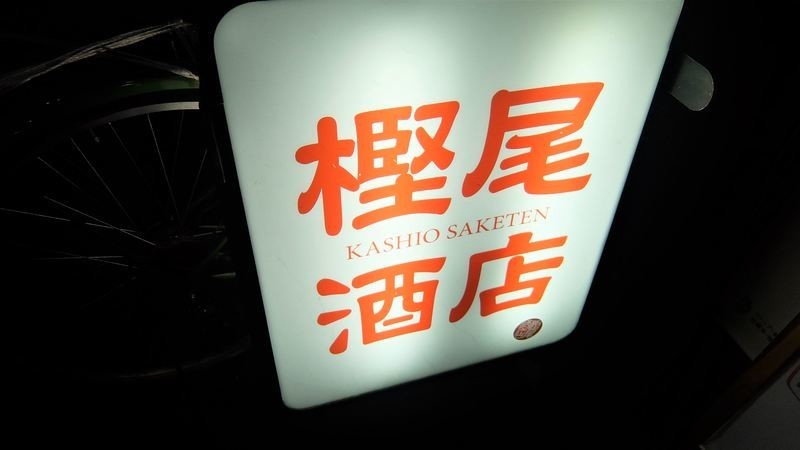 Next we went to Kashio Saketen, an interesting place that is run by a young half Norwegian man. Whereas at Sai we had had our drinks in peace, from here on we talked about everything from world politics to Nintendo with the other patrons of the pubs. And this is the pub with the half Norwegian owner, so even those with limited Japanese should be able to have a drink and some chicken lever here. 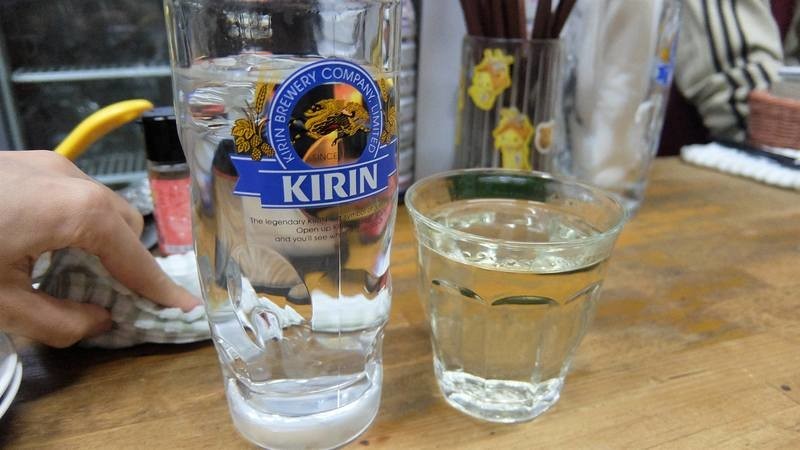 The glass on the right is sake, and the one on the left is shochu diluted with water. So you can see that you get quite a lot for your money here, and from here on we started to get a little bit intoxicated.

The interior of Kashio was to say it in an unexaggerated way, unique. 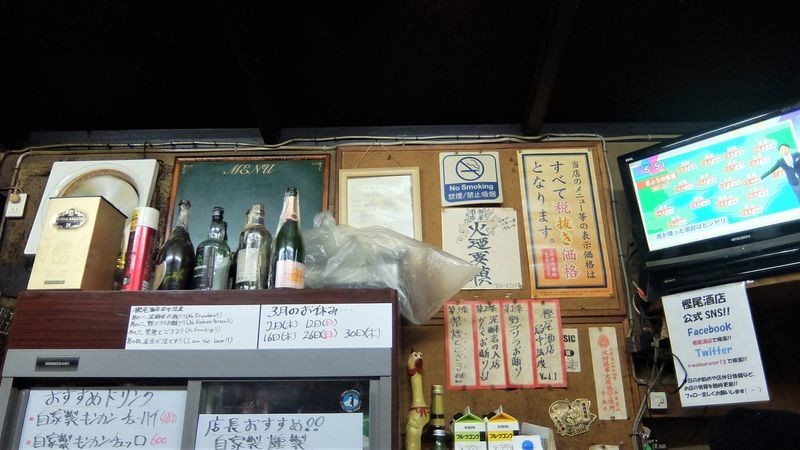 According to one patron, this pub Kashio is getting quite famous around the world recently, and it’s already surpassed Nintendo, and is about as famous as Panasonic and Sony. Though I recommend you take this with a grain of salt. 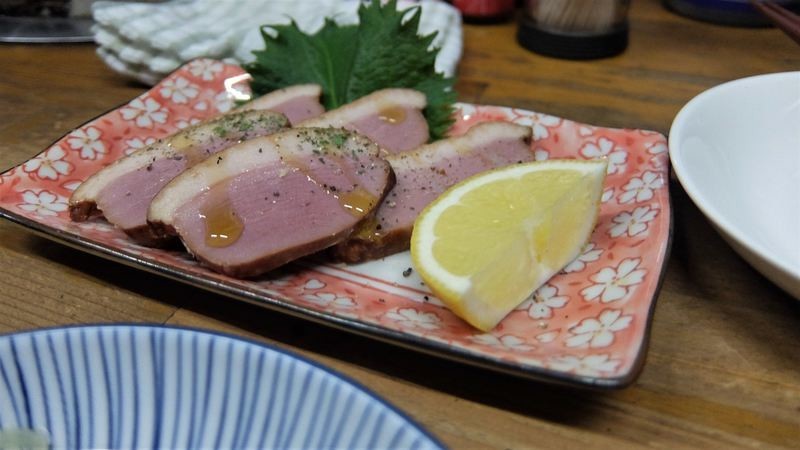 As you can probably already tell from the look of this dish, the roast duck at Kashio was, to describe it with just one word, perfect. In fact almost everything we had at Kashio was great, so much in fact that I’m half worried that they will manage to get a Michelin star and then I will have to line to get in. 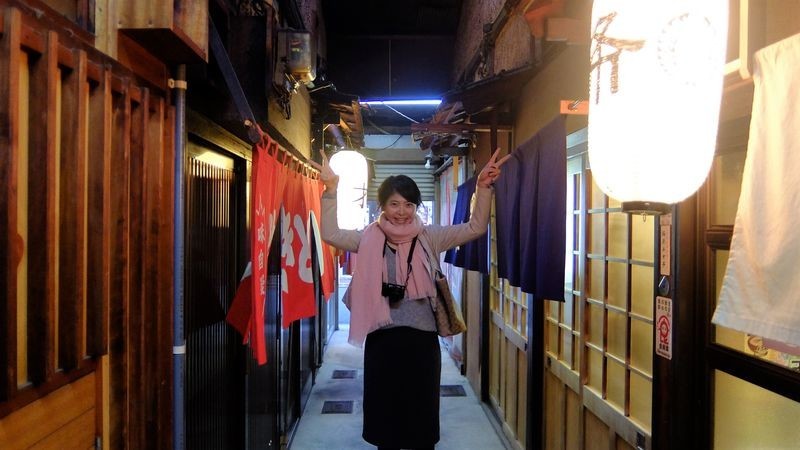 But time flies and it was time to move to the next pub, and leave the patrons of Kashio bickering about who is the better singer, Van Halen’s David Lee Roth or Megadeth’s Dave Mustaine. In this picture you can see Vanessa looking happy knowing our next destination, Fu! 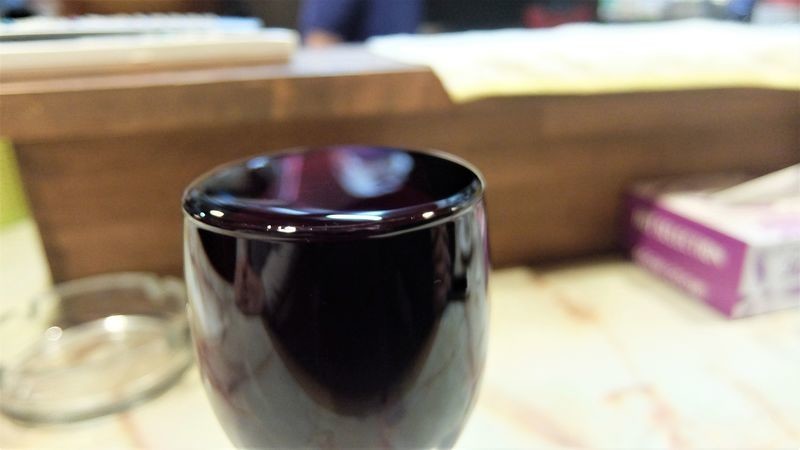 Fu is quite a small pub, but they are famous for the way they serve red and white wine. You get more than you asked for. It’s a good thing they have tissues at hand. 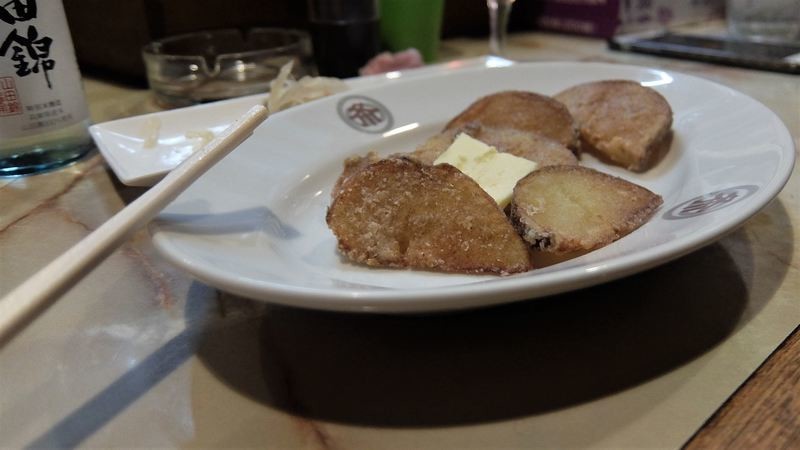 These potatoes at Fu were just great, and they were ordered for us by the lady standing next to Vanessa. According to her these fried potatoes are the best thing at this pub, and I can confirm that the taste is really good, especially after you have had a few drinks. The regulars standing by us were really chatty, and we got to know a lot, like who was coming to the pub tomorrow and what we should order next time, all good advice. 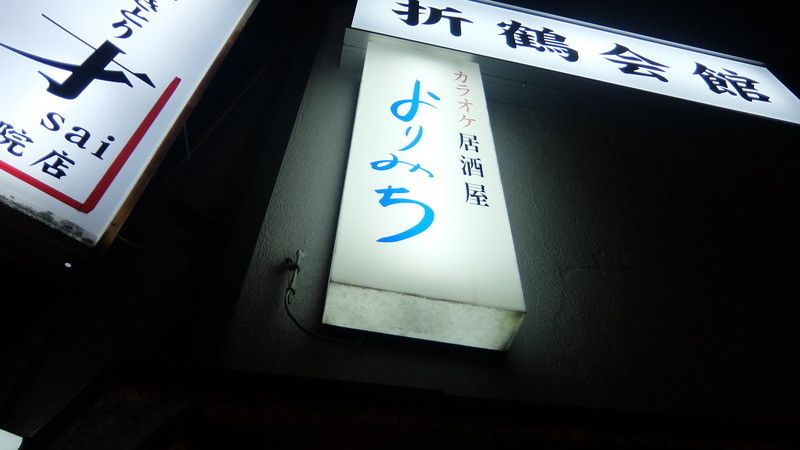 We go deeper into the night of Kyoto! Here we have amateur diner Yorimichi, but which mainly specializes in karaoke and drinks. 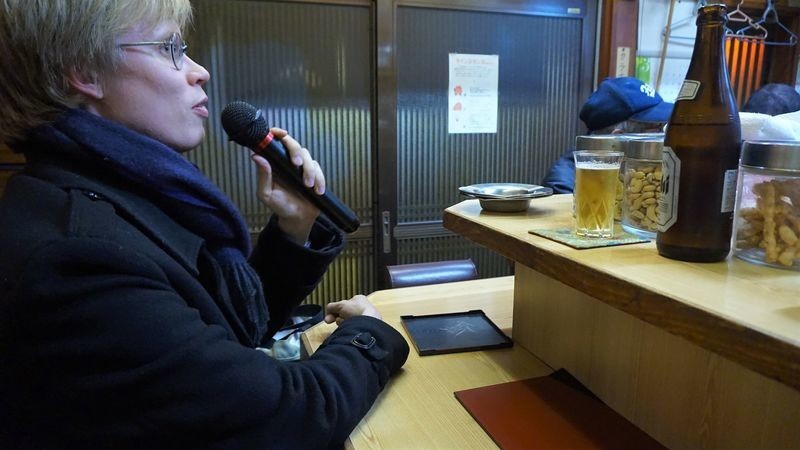 The people at this karaoke bar were a bit surprised to see us, but warmed up to us when I sung my party trick, Ue wo muite aruko (also known as Sukiyaki). If you decide to go to Yorimichi, be prepared that you need to know some Japanese or go with a Japanese person, as the karaoka machine is all in Japanese, though the master can help you choose the songs. 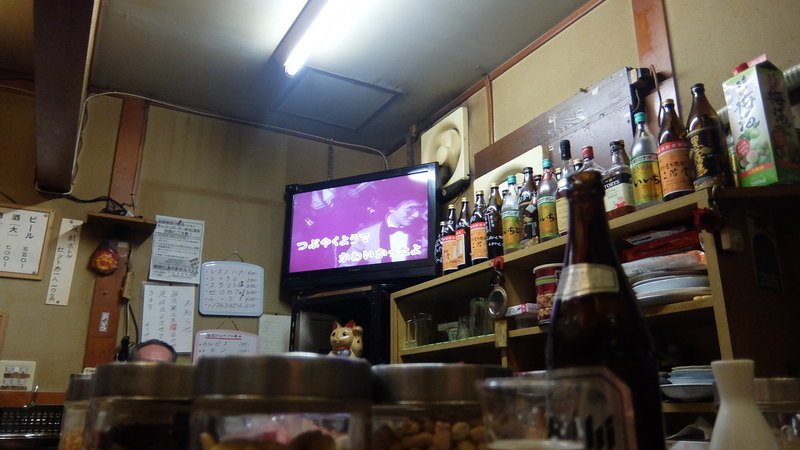 This karaoke bar has none of that stiffness that often is present with the better establishments in Kyoto. So this place could be called the ultimate place in Kyoto to relax with a beer in one hand and mic in the other, some Japanese enka classic blaring on the TV. 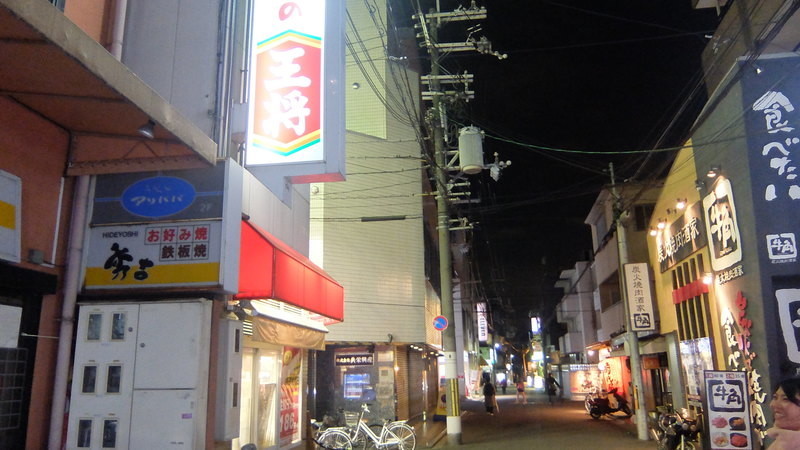 To end our night, we of course had to get a “shime”, or the closing noodles of the night. There is a Gyoza no Osho right across Orizuru Kaikan, so of course we headed there. 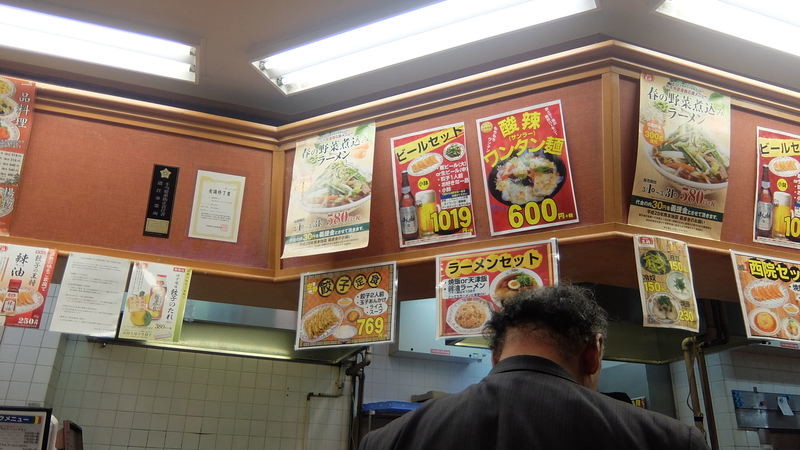 And here I have the best picture I could take inside the restaurant, as I was already pleasantly drunk.