Yoshida Shrine's demons are nothing to play with: they are scary! This event is especially popular with families, and there is a crazy number of food stalls at the event!

In Japan, February is about Setsubun festivals! Setsubun signals change of the seasons, and it has been celebrated in Japan since the ancient times. Setsubun is a time when bad luck has to be driven out, and also a time when demons come out, so on Setsubun beans are thrown on the demons to drive them and the bad luck away.

Setsubun is a big thing in Kyoto, and in February there are Setsubun festivals at most of Kyoto’s shrines and temples. Among those Setsubun festivals, Yoshida Shrine’s is more famous and bigger than the rest. The shrine is close to Kyoto University, and it’s normally a rather quiet place, but on the day of Setsubun the shrine gets caught up in a festive mood! The demon exorcism ritual is especially famous. And we participated in this festival! 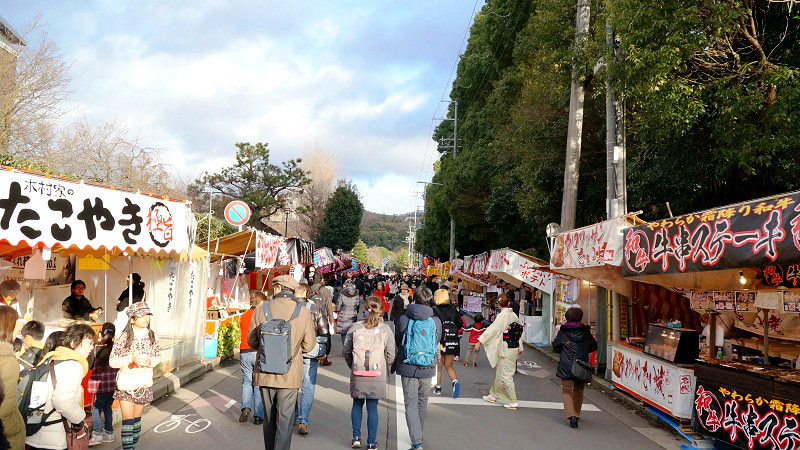 Yoshida Shrine is a 15-minute walk from Demachiyanagi Station. The most special thing about this festival has to be that there are really many food stands! There are over 600 food stalls! On the day of the festival, the road is lined on both sides with food stalls and only pedestrians can walk on the road. 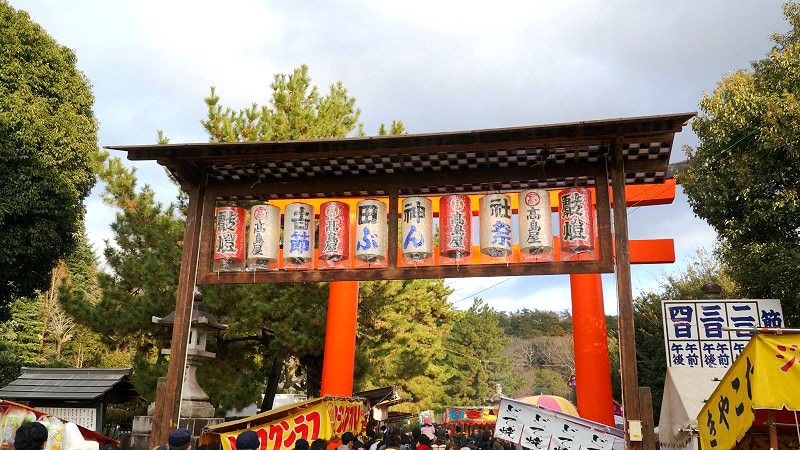 After walking for a while we finally see the torii gate, but there are many food stalls also beyond the gate. From here on the road gets narrower still so it gets really crowded. 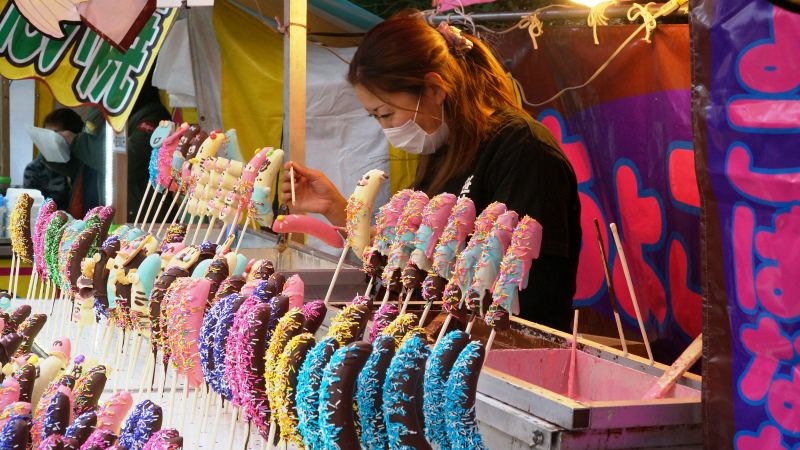 I found an interesting food stall! They sell chocolate bananas of a variety of colors, plus there are also bananas that look like cartoon characters! 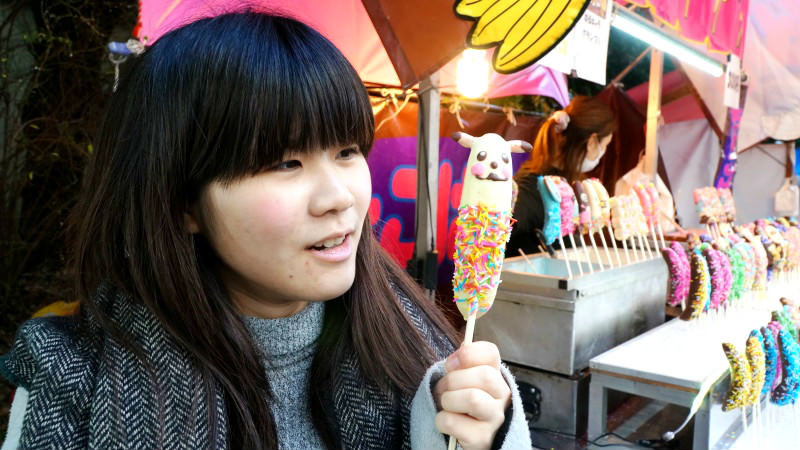 I chose a Pikachu-looking banana. Besides Pikachu, they also sold Anpanman and Hello Kitty bananas so the stand was really popular with kids! 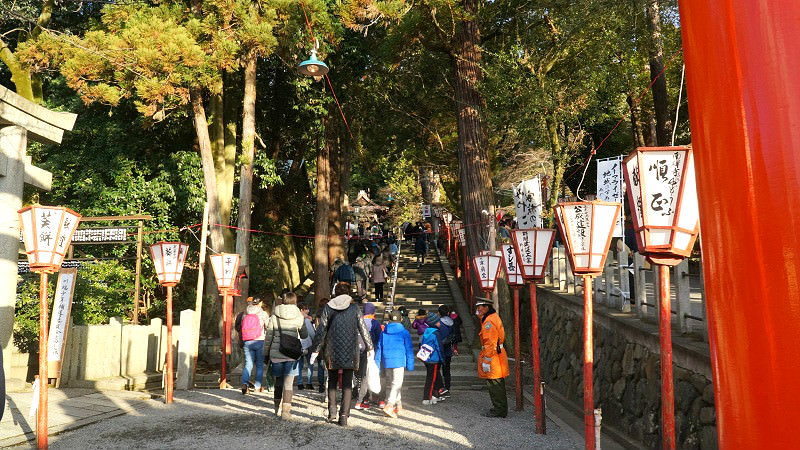 Finally we are at the shrine. Yoshida Shrine is on Mt. Yoshida, and from here you have to walk up the stairs to get to the shrine. I recommend you wear walking shoes when you go to Yoshida, since there are many steep places on the premises.

There were many fun events also at the shrine itself. 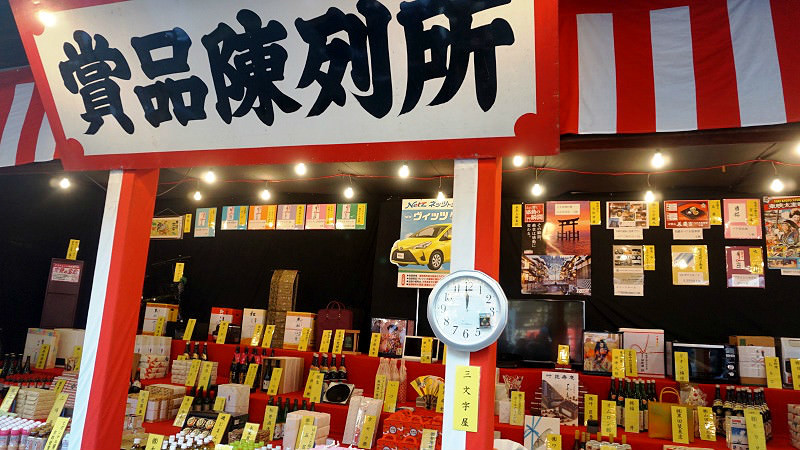 At the Yoshida Shrine Setsubun Festival, if you buy a bag of good-luck-beans for 200 yen you also get a draw ticket. There are many prizes for the draw, but this year’s first prize was a car! There are other prices like televisions and travel vouchers, so they have a lot of variety with the prizes.

I recommend you try your luck at least once a year, so how about some lucky beans! 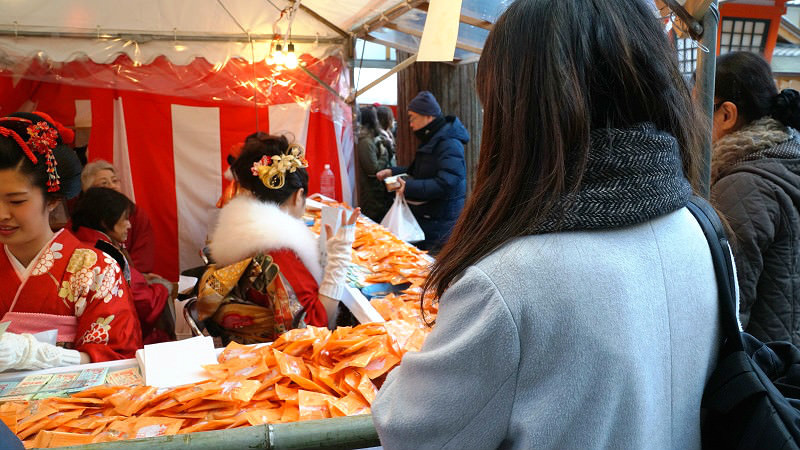 Lucky beans are sold at many places on the shrine premises. 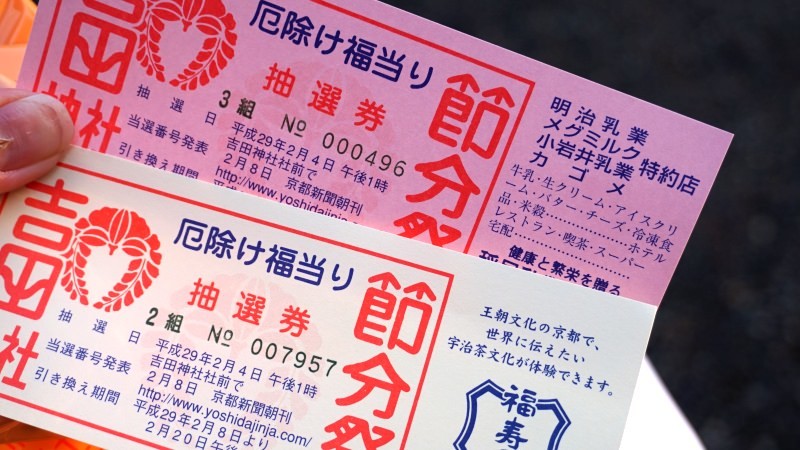 If you buy a bag of beans, you get a draw ticket like this. Keep this ticket safe until the day when the winning numbers are revealed. The results are published on the last day of Setsubun at Yoshida Shrine, and after this they are also published on the shrine’s website and on the Kyoto Shimbun newspaper. (I, Erika, and Sampo also checked out our numbers on the shrine’s website but unfortunately we didn’t win anything…) 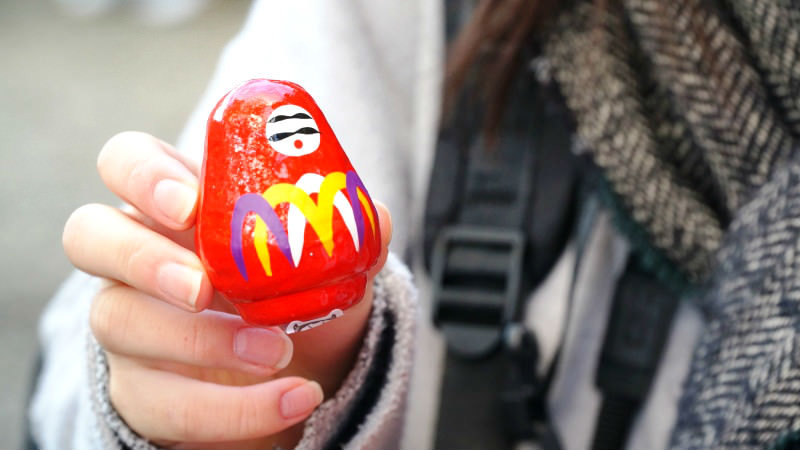 You can also buy a cute Daruma doll like this that has a fortune slip inside it.

There are also other shrines when you continue up the mountain, there is a lot to see so you can really enjoy yourself! 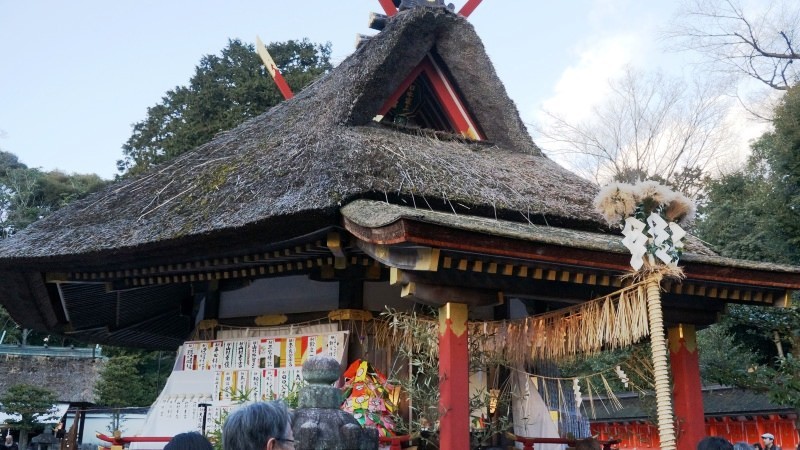 This shrine is called Daigengu is a shrine that worships all the gods of Japan, and normally it is not open to the public. The shrine is only open on the day of Setsubun, and on this day anyone can go inside the shrine. Going to this shrine once means that you have prayed to all the gods in Japan, so this shrine is a real time-saver! 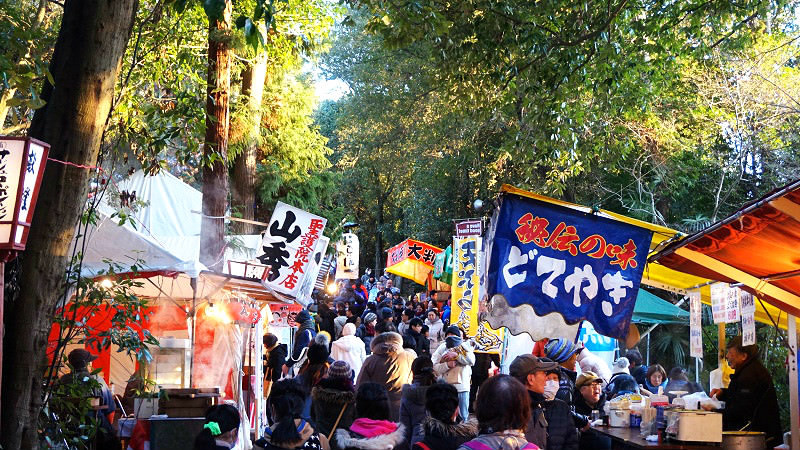 We went up to Daigengu on this narrow road which is jostling with food stalls on both sides. Some of the stalls sell sake and toshikoshi soba, year-crossing noodles, not the normal festival fare, because February is the time of Lunar New Year. 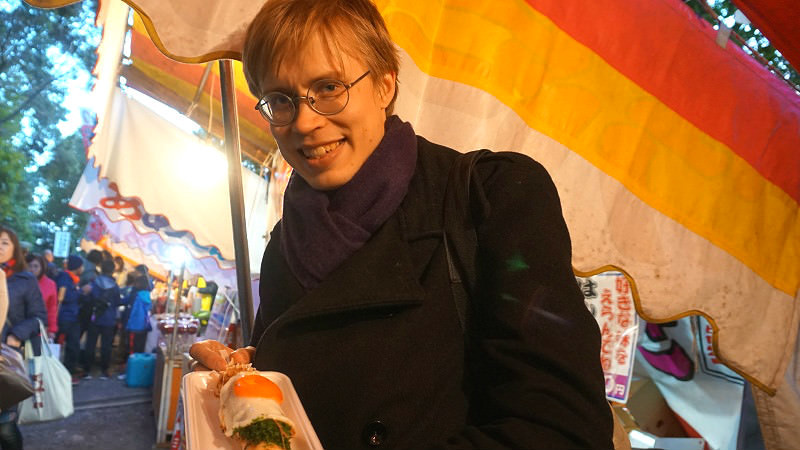 Sampo bought a hashimaki! Hashimaki is a wheat-based thin pancake rolled on disposable chopsticks, topped with okonomiyaki sauce and mayonnaise. Hashimaki is a staple food stall dish in west Japan. This was the first time for Sampo to have hashimaki. 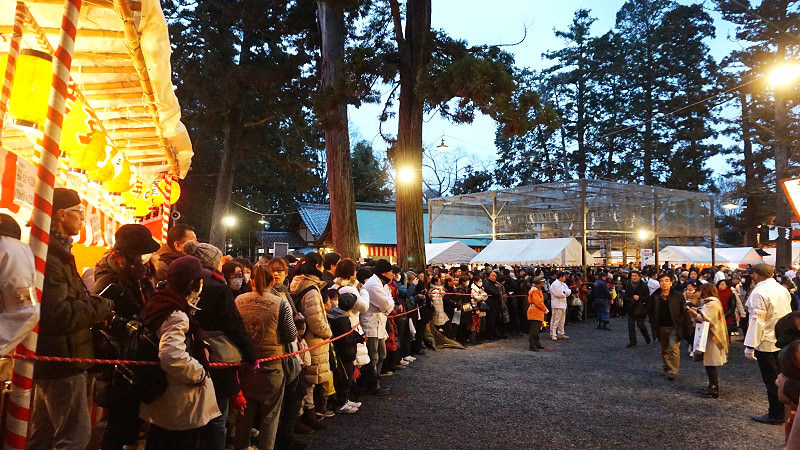 At around 5 p.m. the road is lined with red rope and you cannot move freely anymore. Many people are waiting for the Tsuinashiki, a demon exorcism ritual starting at 6 p.m. We of course decided to stay here to see the demons! You need to take a place at least one hour before if you want to see the demons well.

So when the time comes at 6 p.m., children holding flaming torches and a tall demon appear from the depths of the mountain. 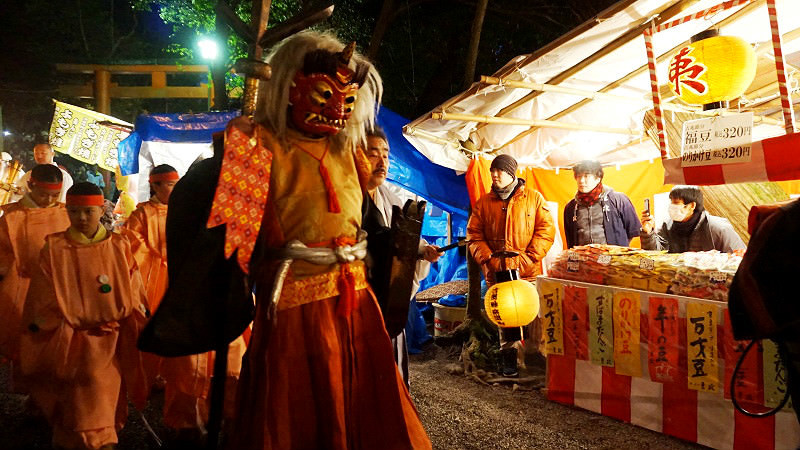 It felt like this demon must be at least two meters tall, and he felt incredibly powerful. In fact this demon is not a bad demon, but a demon exorcising demon called Hososhi. So he is a good demon! He keeps on walking toward the main altar where the ritual is held. 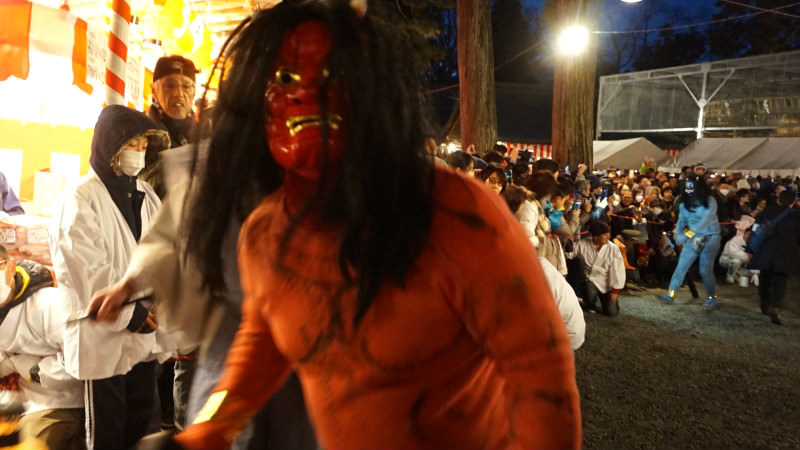 But three bad demons force their way into the altar! They run around roaring, scaring the people watching. 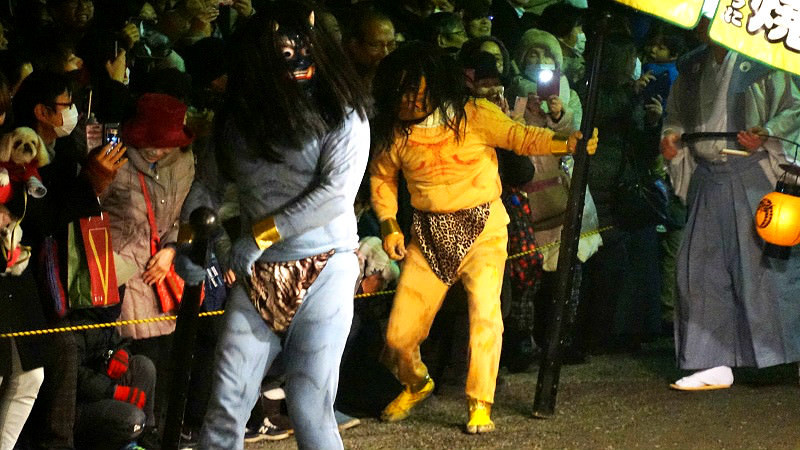 There are three demons, red, blue and yellow, and they are said to represent disasters and bad luck. 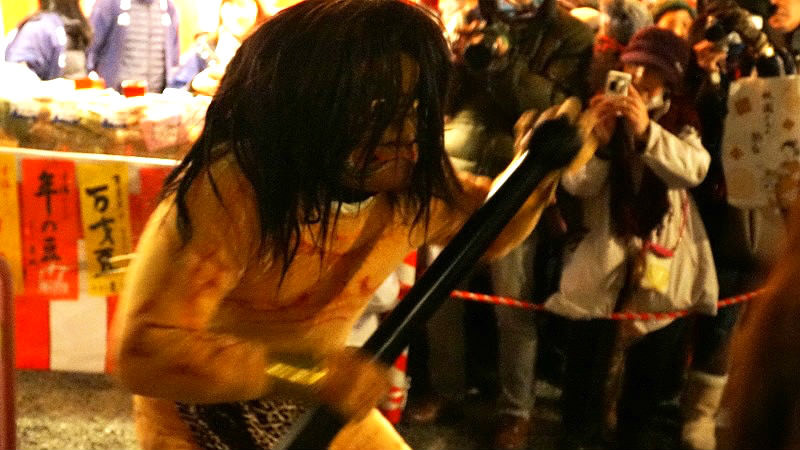 The demons like to scare people, and they especially like scaring children so if they saw a child, they went right there and roared, and since they look so scary many children were crying. 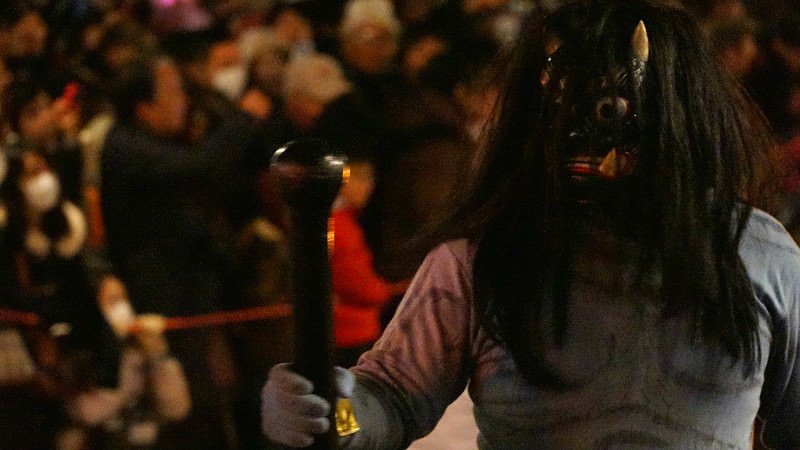 The mischievous blue demon got a bit too excited with it all so at one point he went too far and had to be brought back by the shrine staff. 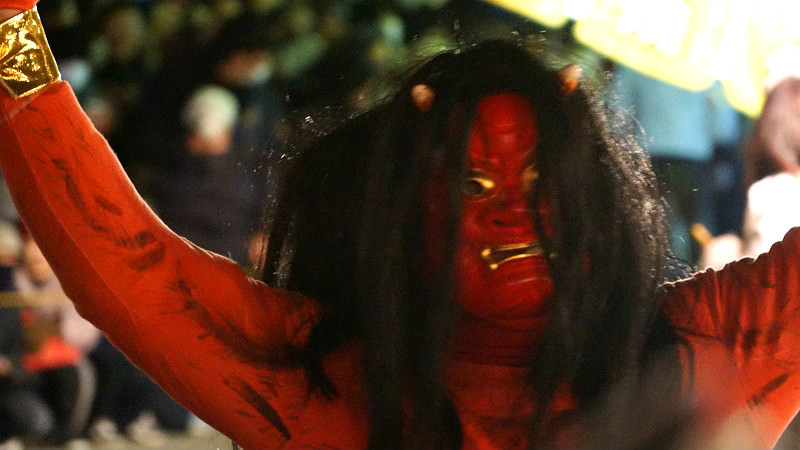 This demon performance takes about 10 minutes, but the demons are really service orientated so they come really close to you. They move really fast so just looking at them is fun. And after this there is the exorcism ritual in front of the main altar. Since we were by the road to the altar we couldn’t see the ceremony itself, but it may actually be more fun to look at the rampaging demons by the road. 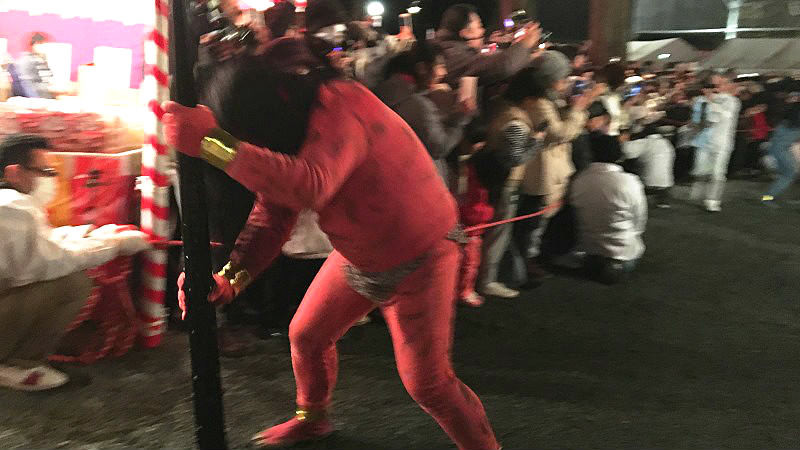 After the ritual the demons come back. The Hososhi seems to have been successful in exorcising the demons this year too, so now the demons are using their clubs as support and walking unsteadily.
The demons are a bit scary but they have a comical and mischievous side to them so it’s hard to hate them. After seeing them, now I know why many people come to Yoshida Shrine to see the demons every year.

The Tsuinashiki ends in about 30 minutes. On this day the food stalls are open until 10 p.m. so you can enjoy the festive mood until late. At night the festival is if possible even more festive and bustling. 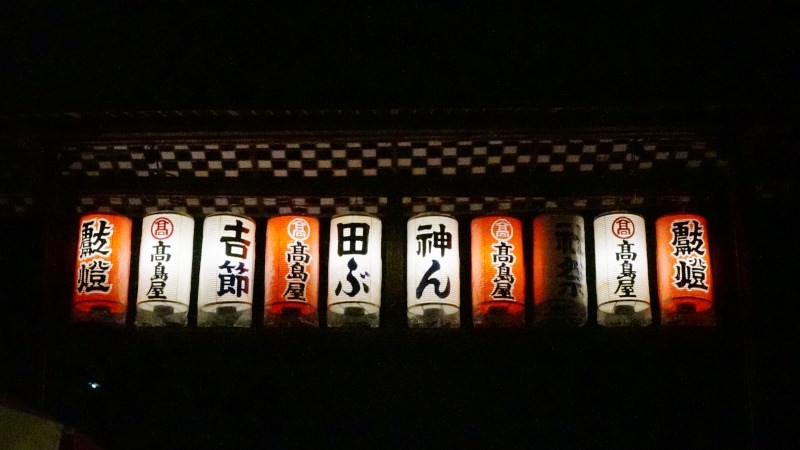 The Tsuinashiki ritual was the most impressive thing about this festival, but there were many other events to enjoy beside that at this Setsubun festival. Even if you don’t know that much about Setsubun, just being there is fun! Those whose schedules permit it should definitely go to Yoshida once; you will have an interesting experience!