The ROHM Illumination event close to ROHM's HQ is the best Christmas lights even there is in Kyoto, plus it's not overly crowded!

First, I think I should introduce myself. My name is Sampo and I started working at Sharing Kyoto in December 2016. I am originally from Finland, but ended up in Japan after a three year stint in Taiwan. I understand both Japanese and Chinese, so I hope I can be of help to you all! This is going to be my first article here on Sharing Kyoto, so wish me luck! 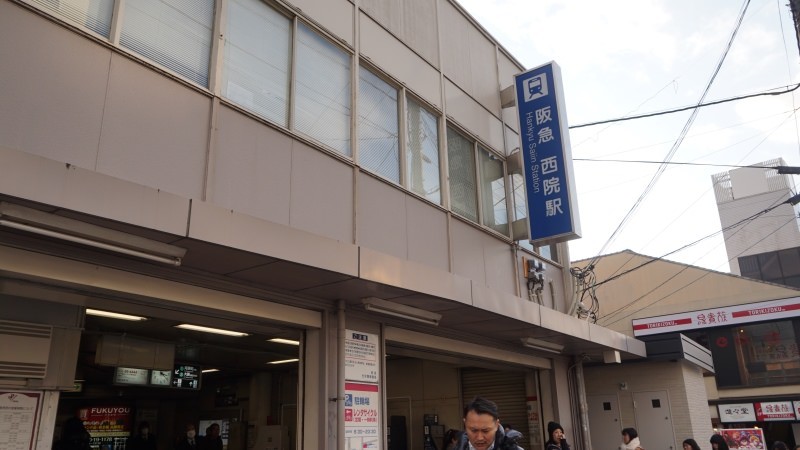 We went to see the Christmas lights event that is hosted by the ROHM Corporation. Since event is hosted by ROHM Corporation, it is only natural that the event takes place close to their headquarters. Their headquarters is a bit far from the closest stations, but it only took us around 20 minutes to get there from Hankyu Saiin station. However the easiest way to get there is to take buses 13, 75 or 205 and get off at the Nishioji Gojo bus stop. 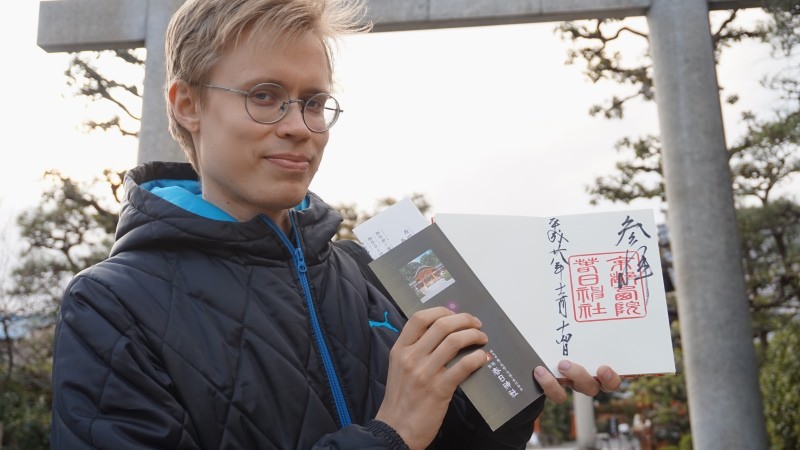 Before going to the illumination event we decided to go to Kasuga Shrine. Kasuga Shrine is a big shrine located in Saiin, though not really a tourist destination. This also might be why they didn’t let us take pictures inside the temple grounds. But we got a stamp on our temple stamp book! Temple stamp books are a great way for you to remember the temples you have gone to. We are planning on writing an article on them, so stay tuned! 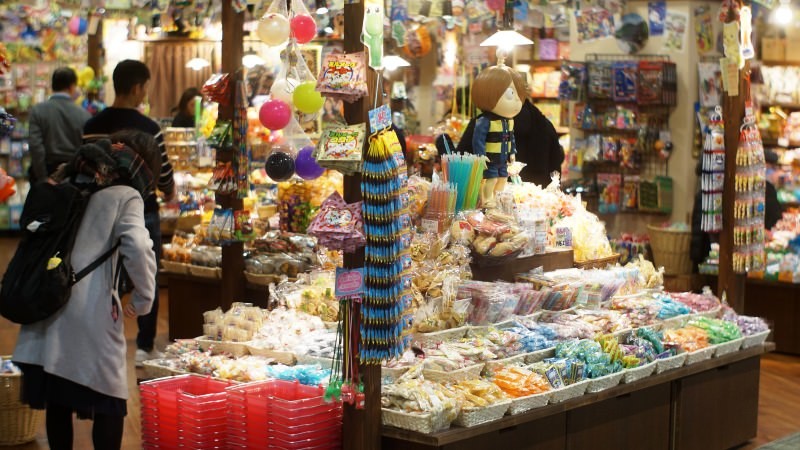 We got to the main street, Promenade of Light, a bit early so we decided to go to the Kyoto Gojo Aeon mall close by to take a look at some Japanese dagashi. Dagashi are cheap candy, which is also where they get their name from, the name meaning inferior candy. Okashi, especially in Kyoto, means high quality traditional confectionaries. Compared to this dagashi are cheap and mainly aimed at children. Dagashi stores like the one in this picture used to be everywhere, but with convenience stores and other modern wonders they have lost their footing on the market. Still, dagashi are colorful, cheap, fun, and sometimes even taste good, so if during your visit to Japan you see a dagashi store I recommend you go in with some 10 yen coins in hand. 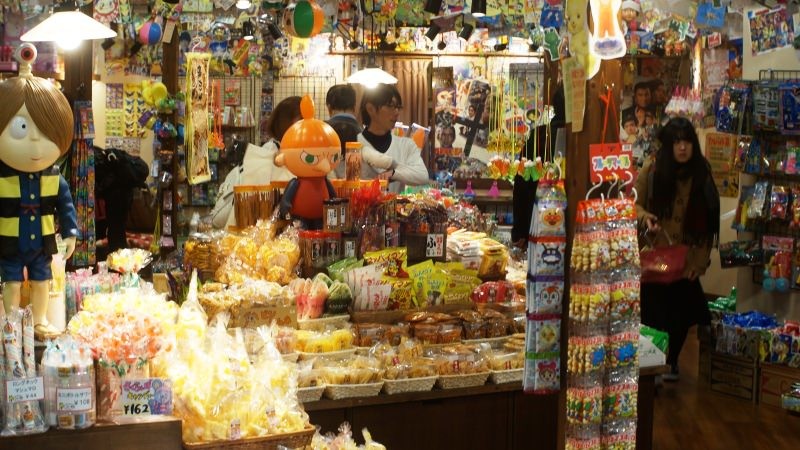 Here you can see Little My guarding her treasures while Kitaro from Gegege no Kitaro is looking at her. Some of the things sold at this store only cost 10 yen, and even the most expensive ones were around 500 yen. A great place to find souvenirs on the cheap. 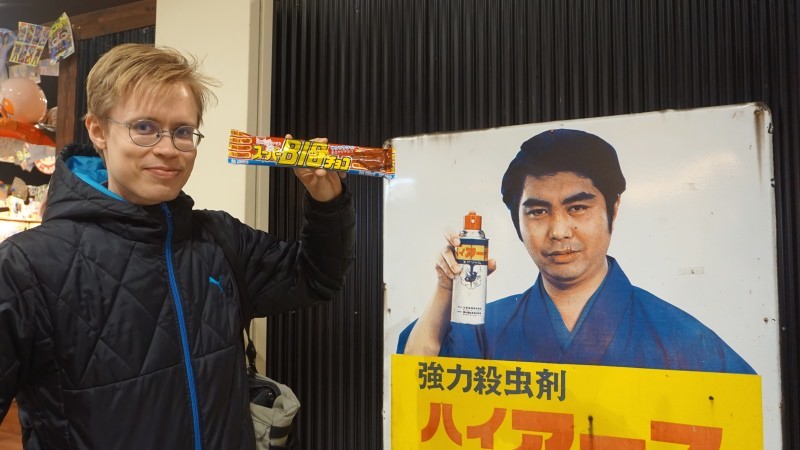 This is me holding my “Super BIG Choco” chocolate wafer bar that cost me 54 yen. For the price it tasted surprisingly good! The guy on the retro sign is holding a can of insect repellent for an unknown reason. 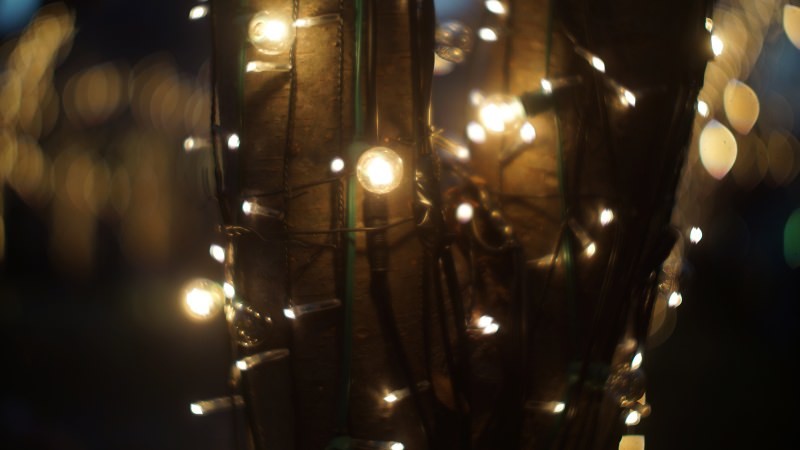 Finally it was time to go see the lights! The Christmas lights can be seen until December 25th, every day from 4:45PM to 10PM, free of charge. The lights themselves were really pretty, and they also had beautiful music playing from speakers by Promenade of Light. The event seemed to especially popular among families, as there were really many children running around, though we did see some couples walking under the lights too. 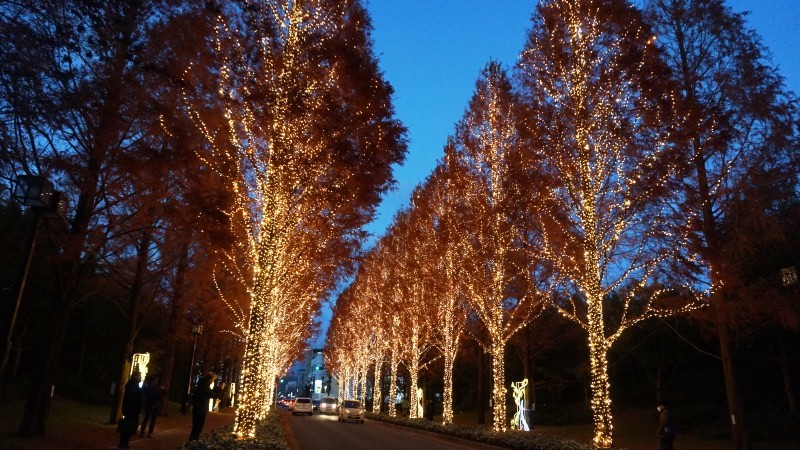 The ROHM Corporations has set up 800 000 lights for us to enjoy! That is eight hundred thousand lights! This means that this event gets the Sharing Kyoto Event for Those Afraid of the Dark badge of honor. These are not Christmas illuminations per se, but the mood is very Christmassy. Now if only we could have a white Christmas! 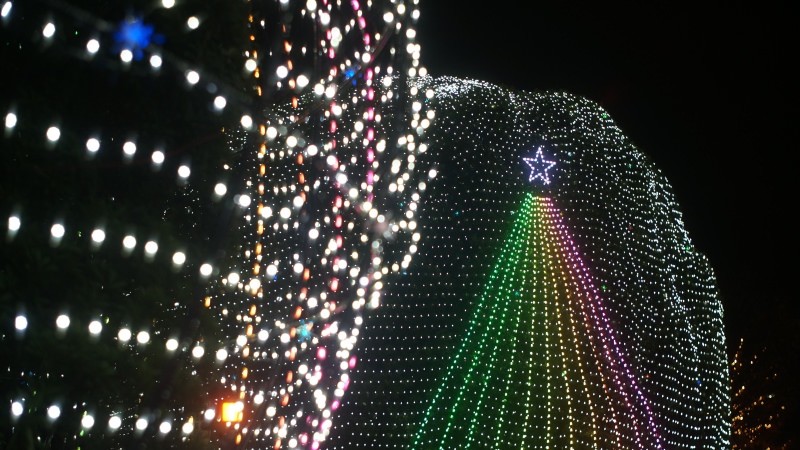 One of the highlights of the event are these two huge round balls at the beginning of the Promenade of Light. These balls are built around two huge Japanese bayberry trees the ROHM Corporation calls “symbol trees”. 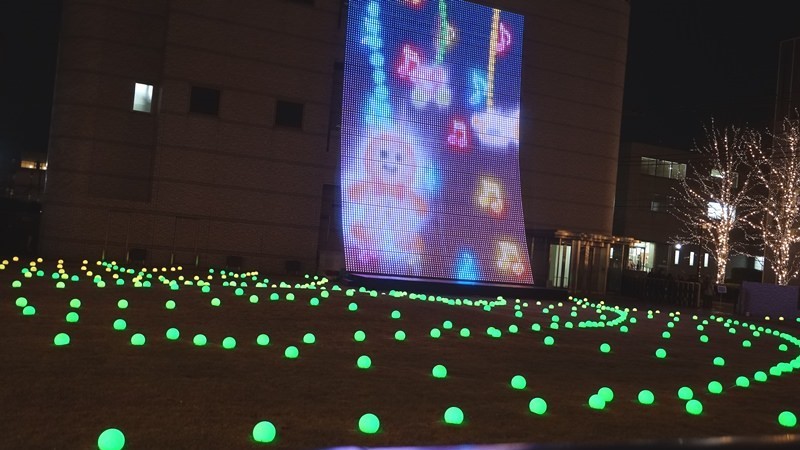 There was also a huge screen that showed an animated Santa Claus jumping with reindeer. And then there were the Teletubbies-like characters like in this picture. The lights in front of the screen were maybe more interesting than the screen itself; these lights changed color from blue to red, and from yellow to green. It was like a sea of colorful lightbulbs. 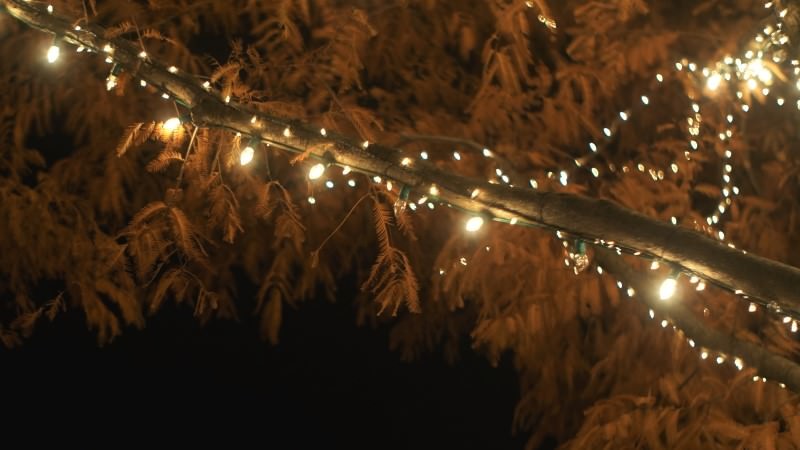 As you can see from this picture, the trees still had some leaves on them, and they were pretty. But this event really isn’t about enjoying the leaves so just seeing some was a plus. So if you want to see Christmas lights in Kyoto, I recommend you go see the ROHM illuminations! They even have a capella concerts on the weekends. 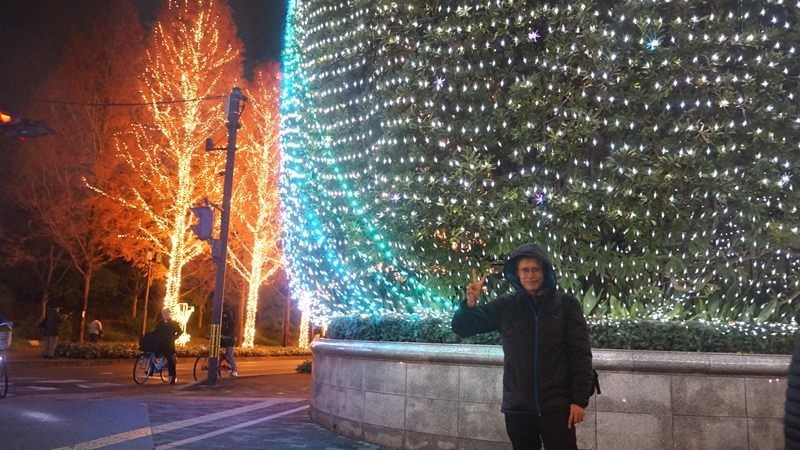 It started to rain so it was time to head back to the office. We spent about an hour at the event, but if you don’t take too many pictures you could be done in about 30 minutes. The Rohm illumination event might not be as big an event as the illumination events held in Tokyo or Osaka, but still it had a charm those bigger events cannot capture. There were not too many people and you could listen to the music playing, and just enjoy the lights. If you are quick you can go there this Christmas, and if not, well there is always next Christmas!

A comment from the staff
More Blog Articles
Novel Coronavirus Street Interviews with Tourists in Kyoto
Daily Updates – Information on the Spread of Coronavirus in Japan
Coronavirus – Methods and Things Available in Japan to Help Prevent Infection
Coronavirus – Stave off Infection with these Nutrient-Packed Foods!
The Ultimate Guide to Ginjo Ramen Kubota 2020 – Presented by Sharing Kyoto Editor in Chief
VIEW ALL
Share
×
Share
Share
Tweet