On the 1ts of June 2019, Sharing Kyoto got the opportunity to check out the first annual Fushimi Craft Beer Festival. The festival featured a collection of six Kyoto brewers, including Fushimi craft beer brewers “Kizakura Kyoto Bakushu,” and “Yamori Brewing,” and the famous Yamaoka Liquor Store. Enjoy chatting with the brewers themselves as you give all the different beers on offer a try.

Out of all alcohol, my personal favorite has to be beer. I especially love craft beer, so I was super excited to get the chance to go to the Fushimi Craft Beer Festival.

The festival was absolutely alive with people as craft beer stalls crammed themselves into the narrow traditional Kyoto streets of the Fushimi ward’s Ryoma-dori shopping arcade.

The first annual Fushimi Craft Beer Festival was held on the 1st of June 2019.

We arrived at the Fushimi Ward’s Ryoma-dori shopping arcade just after 12:00 and there were a lot more people than we expected. 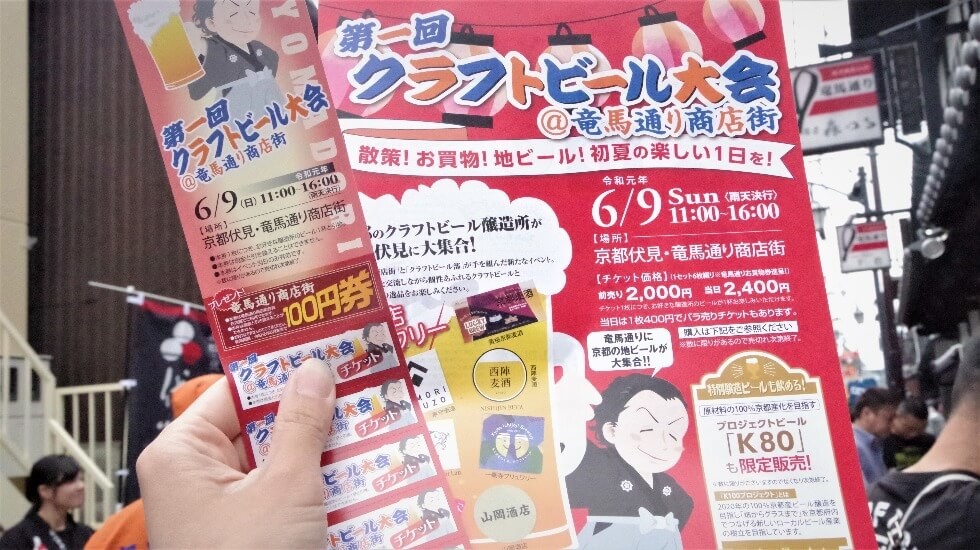 All beer sales were made through a ticket system, so we quickly made our way to the ticket stand. Each ticket is the equivalent of one beer, so we got the set of six.

Which means that we were about to get the opportunity to enjoy six cups of local craft beer. I think I’m in heaven! 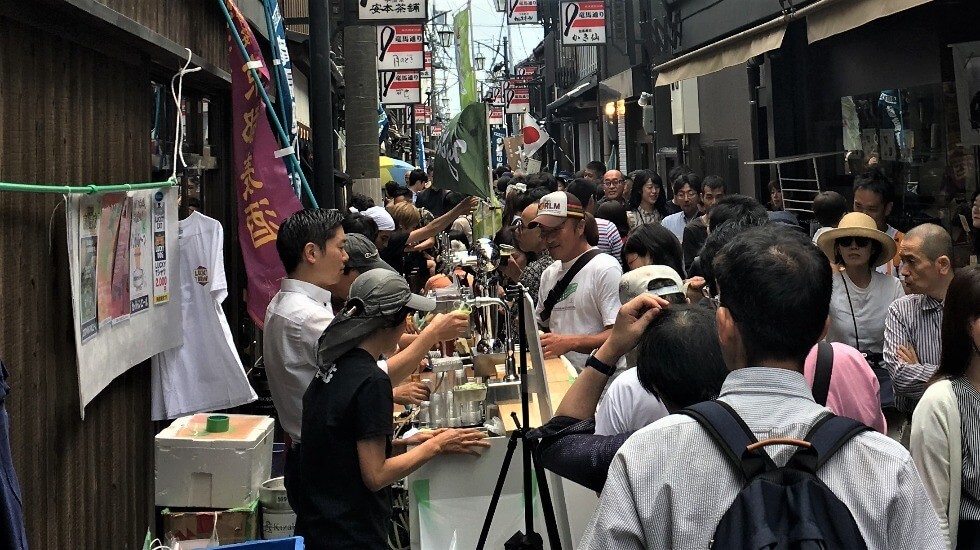 This time there were seven breweries attending the festival.

We were having a hard time deciding which craft beer we should start with, so we thought we would first take a look at everything that was on offer and began making our way down the street. 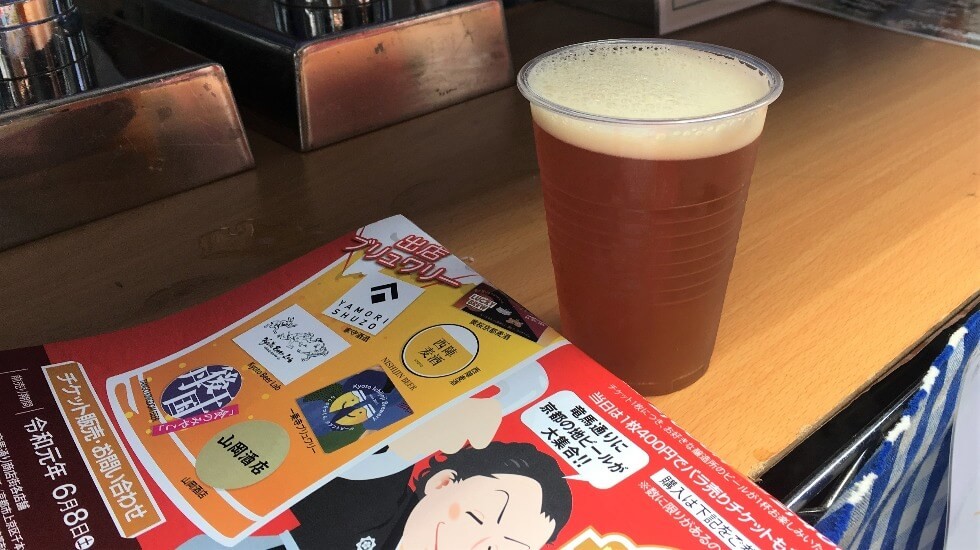 Finally, we made it around the entire festival and got our hands on our first beer. This is the K80 amber ale from “Ichijōji Brewery.”

It was really hot this day, so we ended up quickly chugging it down haha. 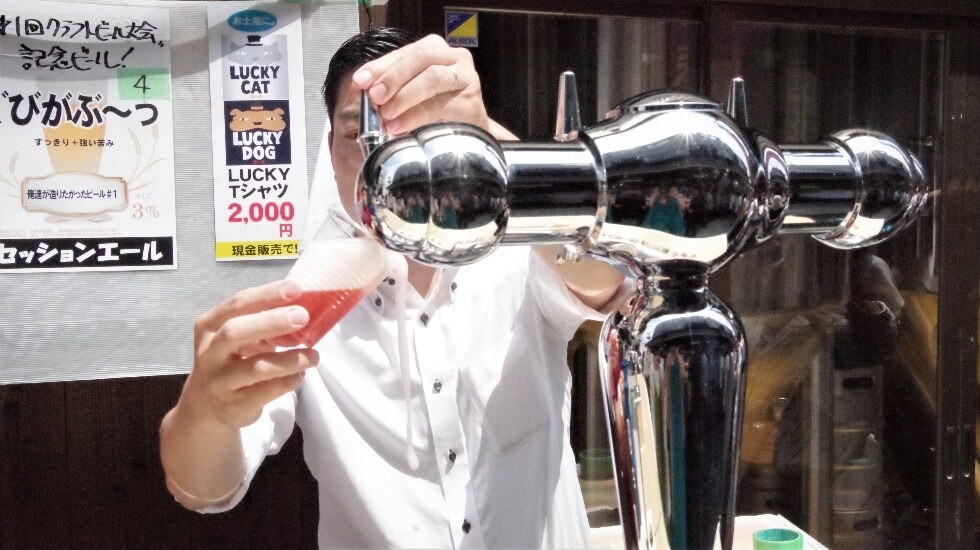 The next beer was the “Kishu Ume” beer from local Fushimi brewery, “Kizakura Kyoto Bakushu.” This craft beer is the wonderful combination of the Fushimi District’s famous “Fushimizu” water and plums from the Kishu region of Wakayama Prefecture.

This beer brings together the refreshing acidity of beer with the lovely aroma of Japanese plum.

Not only that, but the strikingly pink color and sweet and sour flavors gave the beer an almost first love kind of feeling. 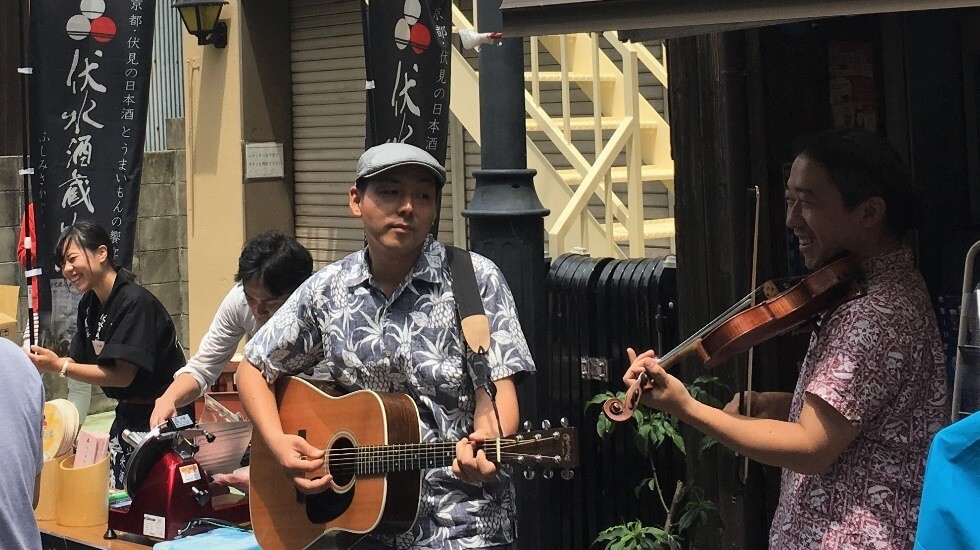 These cool guys started playing guitar and violin halfway through the festival, making it even more of a party than it already was. 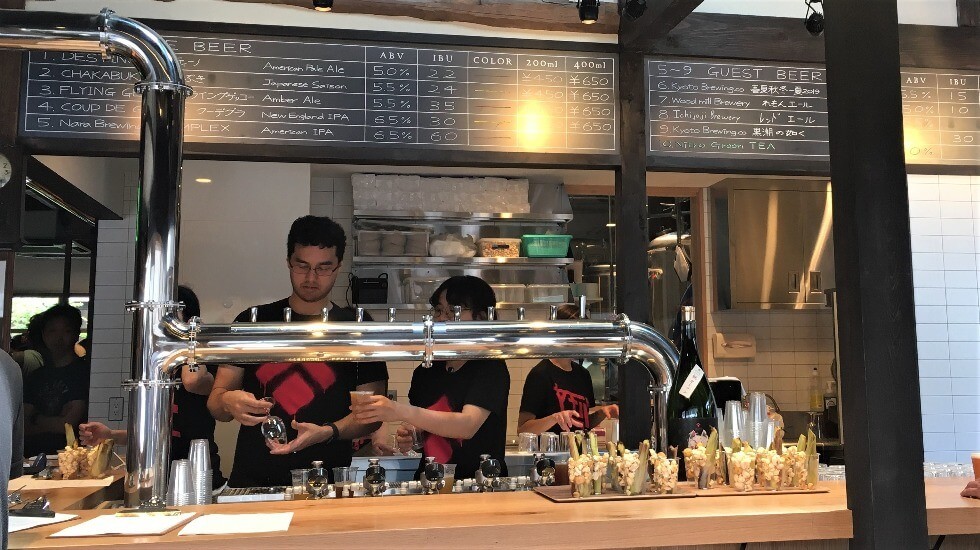 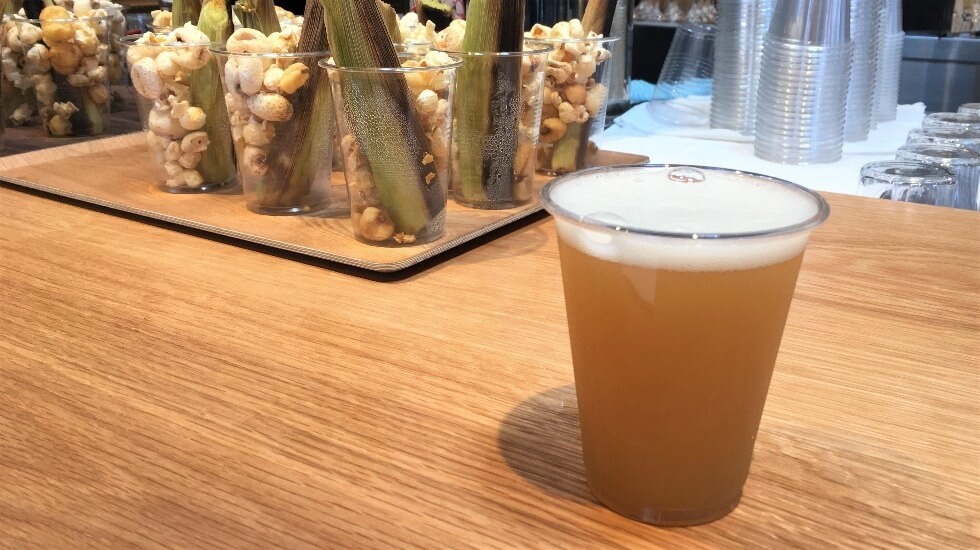 At last, we made it to our third beer of the day, which was from “Yamorido,” a bar owned and operated by the “Yamori Brewery” that had just opened on that day.

This bar was originally a tea shop, so in addition to brewing and selling craft beer, they also sell Japanese tea as well.

This day was the bar’s grand opening, so there were a ton of people, and we had to wait in line for about 20 minutes.

As they had initially been a tea shop, we decided to order the Chakabuki tea beer.

This combination of tea and beer was refreshing, easy to drink, and perfect for summer. 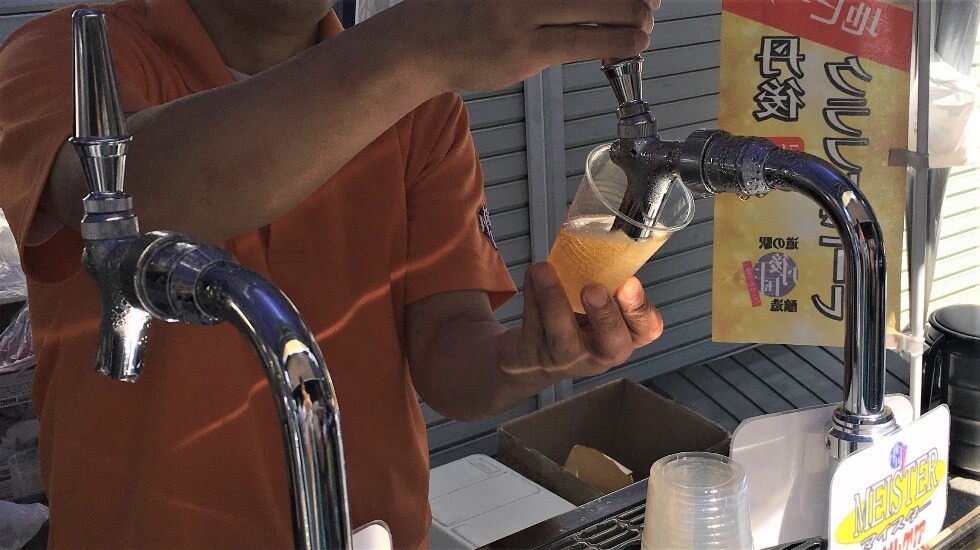 There are so many different types of craft beer, so it only made sense that we wanted to try some different flavors.

Our fourth beer was the “Master” from TANGO KINGDOM BEER.

This beer is made with a type of rice called Koshihikari from the Tango region of the Fushimi Ward. The beer itself has a round mouthfeel and was incredibly refreshing. 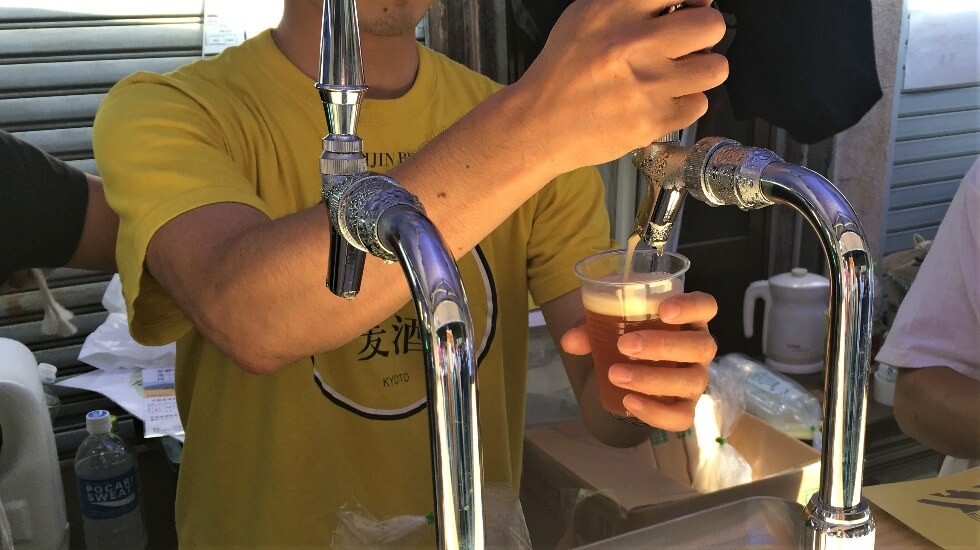 Already onto the fifth one! And we’re not sick of it at all!

This one was the “Yuzu Muge” IPA from the “Nishijin Bakushu” brewery. This IPA was a single-hop beer using custard hops and Yuzu.

The aroma of the Yuzu was refreshing, fruity and a big hit with the ladies. 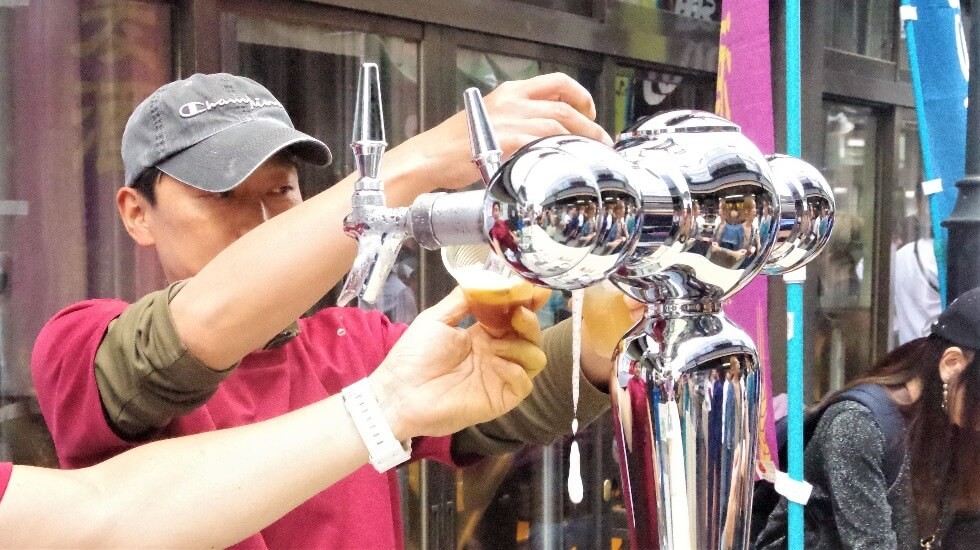 For our last cup, we wanted to go to the “Kyoto Beer Lab,” but they were already sold out.

A little disappointed, we kept walking while thinking of what to do.

Eventually, the “Kyoto Classic” from the “Kizakura Kyoto Bakushu” brewery caught our eye.

This red ale, which features a red color reminiscent of Kyoto’s yellow hue at night, is the fusion of aromatic hops and a deep bitterness. 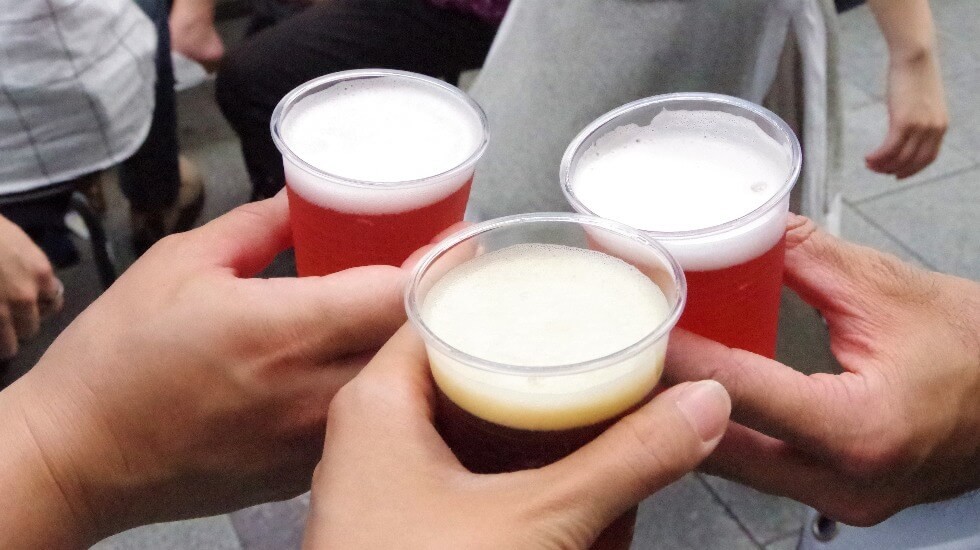 As we were waiting in line we suddenly saw some friends, so cheers everyone!

We weren’t able to get through that many different varieties of craft beer, but we had a lot of fun trying the ones we did, and we are very excited for next year’s festival.