The Hanatoro events are the best events in Kyoto according to one of Sharing Kyoto's writers. The mysterious feeling in Arashiyama is something you won't forget.

We are all eagerly awaiting the next season of GoT, but in Arashiyama you can enjoy the night without having to fear the terrors. Erika and I from Sharing Kyoto went to see Arashiyama Hanatoro, an event where the Arashiyama area is lit up by LED lanterns. It is really easy to get to Arashiyama, you just need to take Hankyu to Arashiyama station. 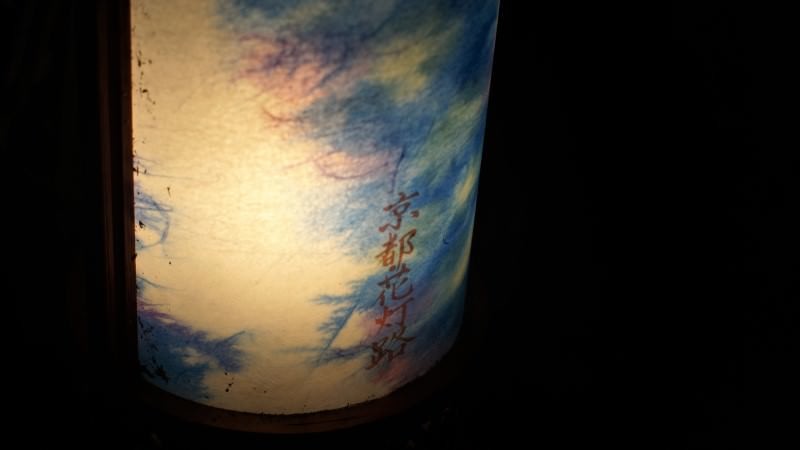 The Hanatoro lantern event is held twice a year in Kyoto, first in March in the Higashiyama area, and then in December in the Arashiyama area. It is December now so of course we went to Arashiyama, but don’t worry; we will go to Higashiyama and to Kiyomizu Temple in March next year! This year’s event ended already, but you can go see the lanterns in Higashiyama area next March, from March 3rd to 12th (2017)! 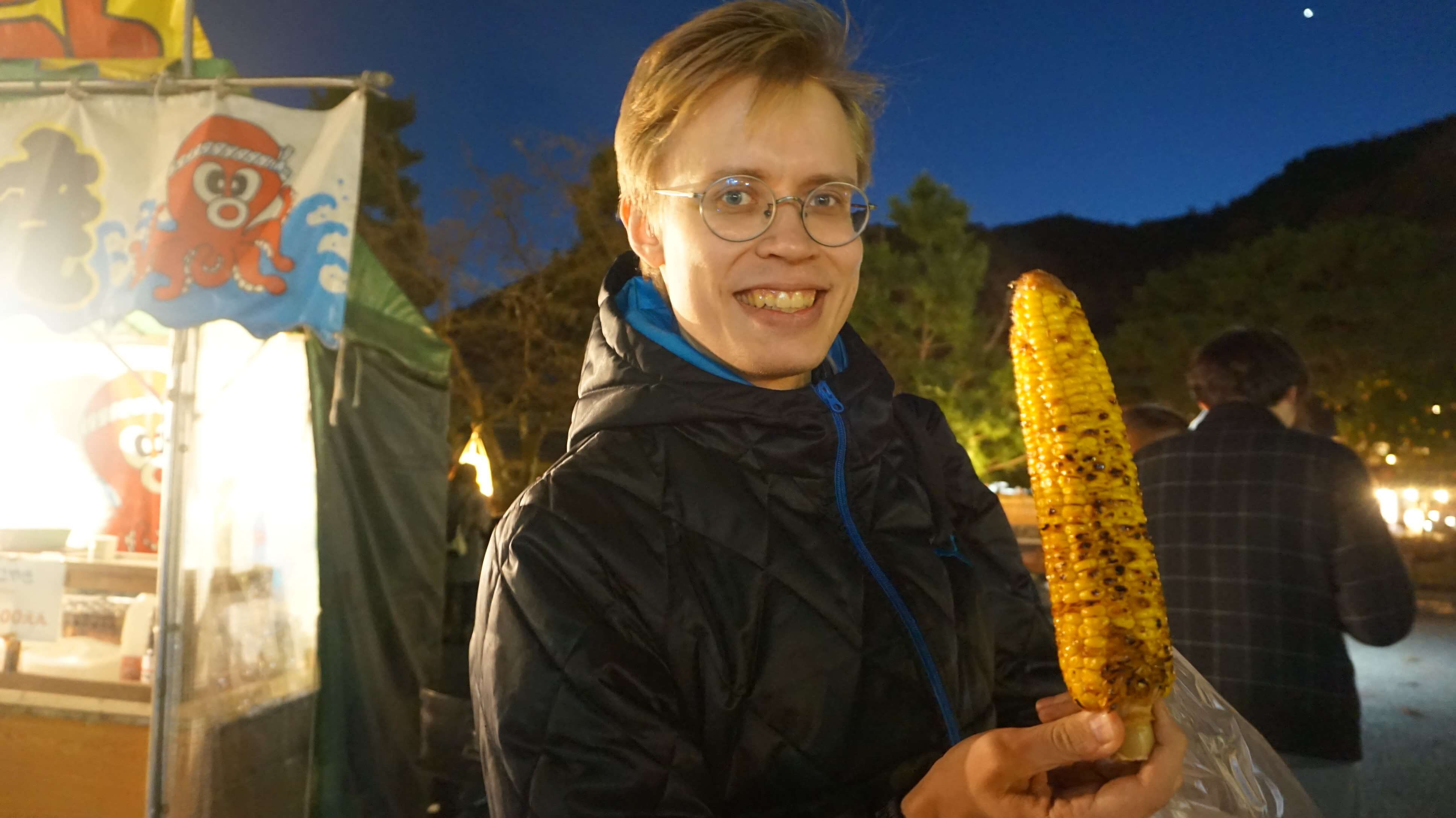 First after arriving in Arashiyama, we had to go to the food stalls. I got myself a cob of grilled corn that cost me 500 yen. The conversation I had with the lady keeping the stall was interesting: “Sauce? OK? 500 yen!” She was succinct, but she got the message across. The corn itself was rather good, except that some parts of it had a rather too generous amount of the sauce. 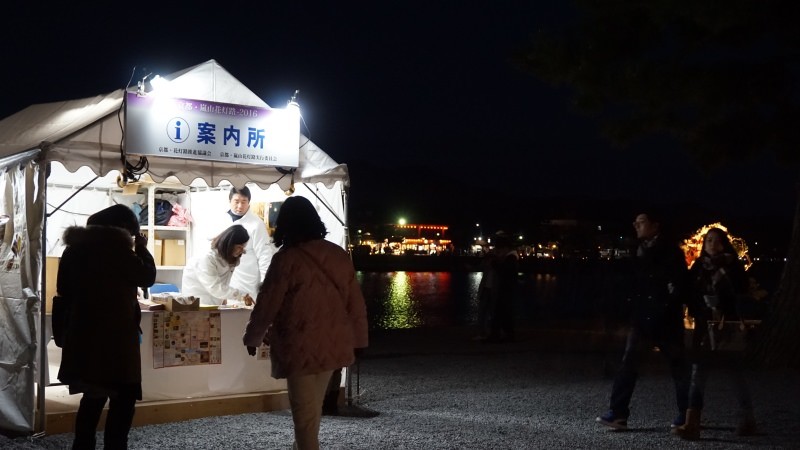 Close to the food stall you can also find an information counter where you can get a map in English, Japanese, Chinese, or Korean. We got a map in English there, and their service was top class so if you want a map during the event, go to this place that has an “案内所” sign in Japanese. 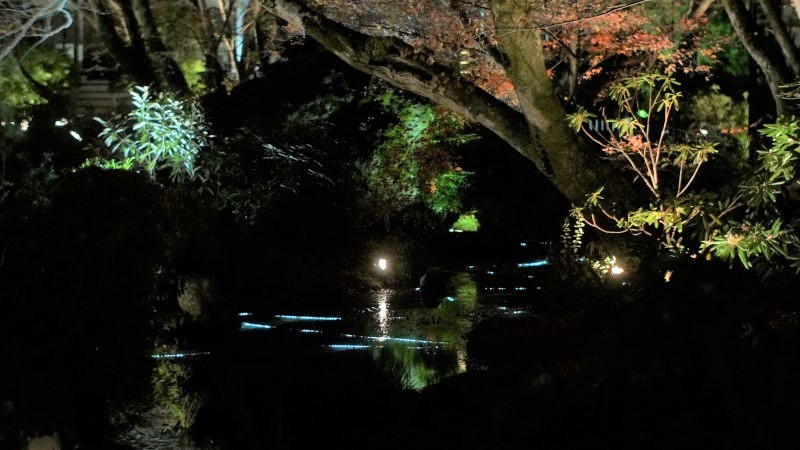 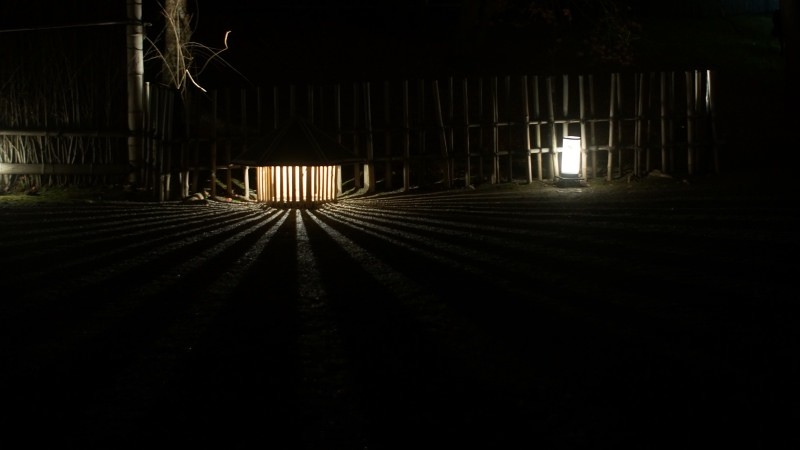 After crossing the famous Togetsukyo Bridge that was full of people as usual, we went to see the Hogon-in Temple. Or rather we went to see their garden. The garden was a really beautifully lit up Japanese garden, and I especially liked the little “Moomin house” lanterns you can see in the picture. The only negative side is that it costs 600 yen to get in, which feels a bit dear since it doesn’t take that long to walk through the garden. But like in this picture, some places inside had a really magical feel to them, and unlike some other places in Arashiyama there were not many people. 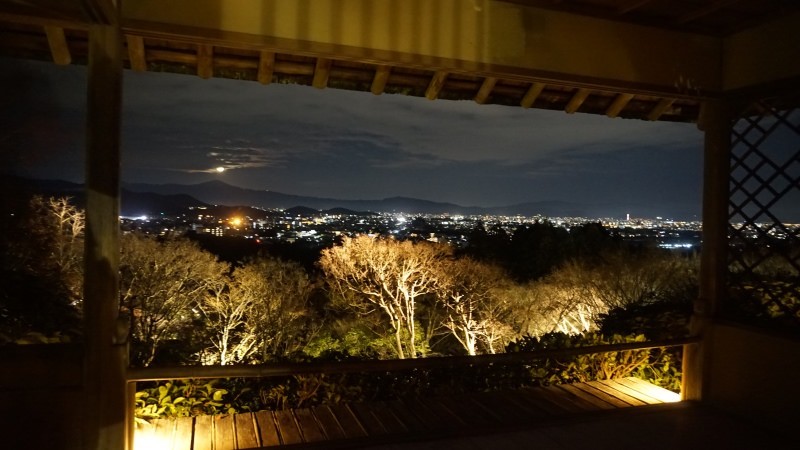 After this it was time to go to my all-time favorite place in Kyoto, Okochi Sanso! This place was a retreat for a famous Japanese actor, Denjiro Okochi, who used to come here to enjoy nature. The view from the top is spectacular! During the Hanatoro event it only costs 500 yen to get in. Normally the entrance fee is 1000 yen, though for this you also get a cup of matcha tea and a traditional Japanese sweet that you don’t when the entrance is 500 yen. But no matter when you go to the villa, you always get a beautiful postcard to remember your visit! 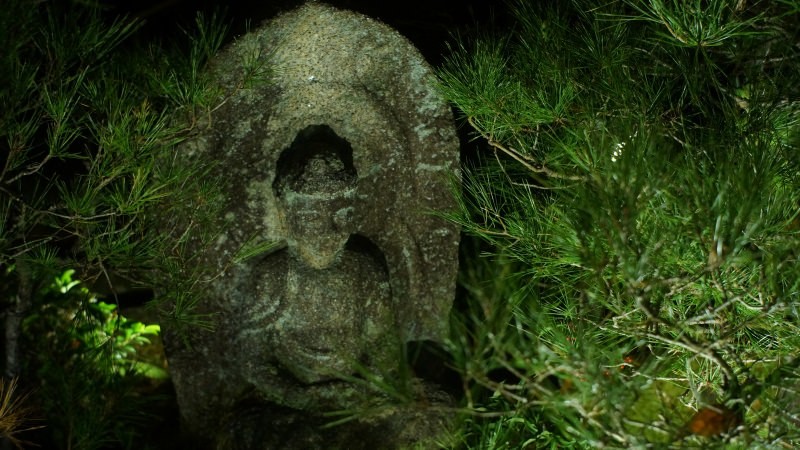 It is the little things like this that make me like Okochi Sanso Villa so much. This small Buddhist statue is lit up with the rest of the building, and no matter how many times you go you will always find something you didn’t notice the last time, there is just so much to see. What a great feeling it must have been for Denjiro Okochi to relax in an environment like this.

▼Click here for more information about the Okochi Sanso Villa 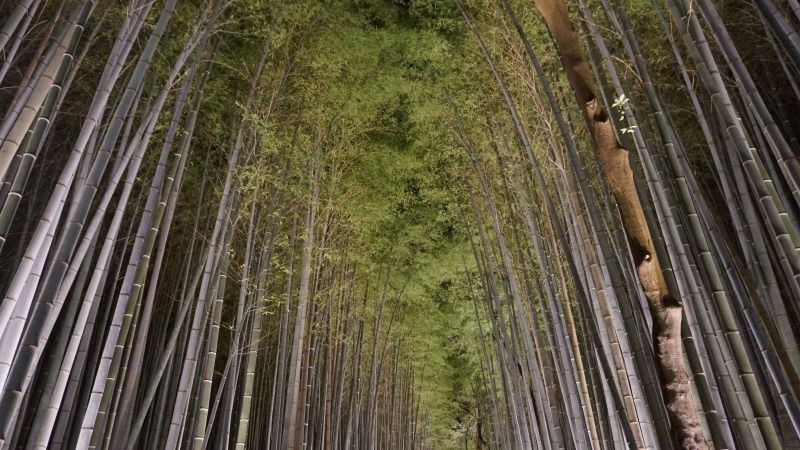 After this, it was time to hit the bamboo grove! Most of the people going to Arashiyama want to see the bamboo grove with its bamboos shooting up to sky. There are a lot of people here, but looking up you can still get into a kind of zen-like state, just staring up at the bamboo leaves and thinking of the history this place must have seen. 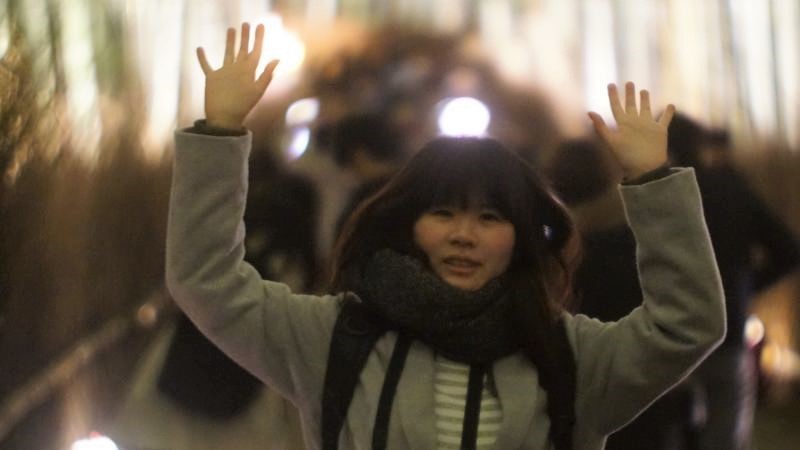 Here you can see Erika looking happy in the bamboo grove. 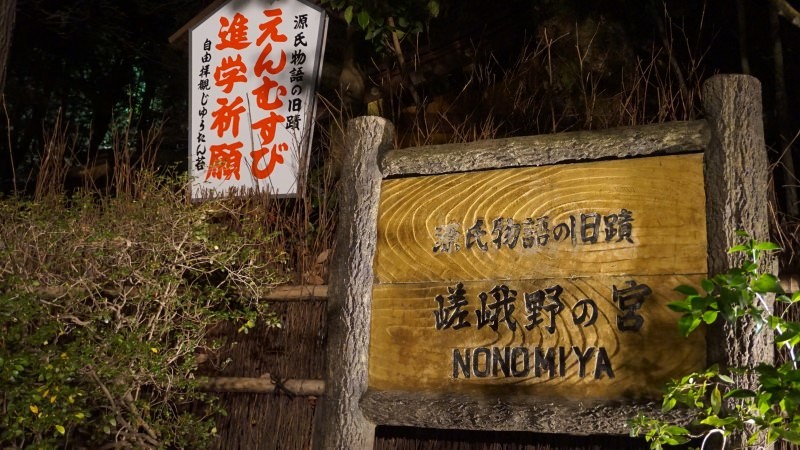 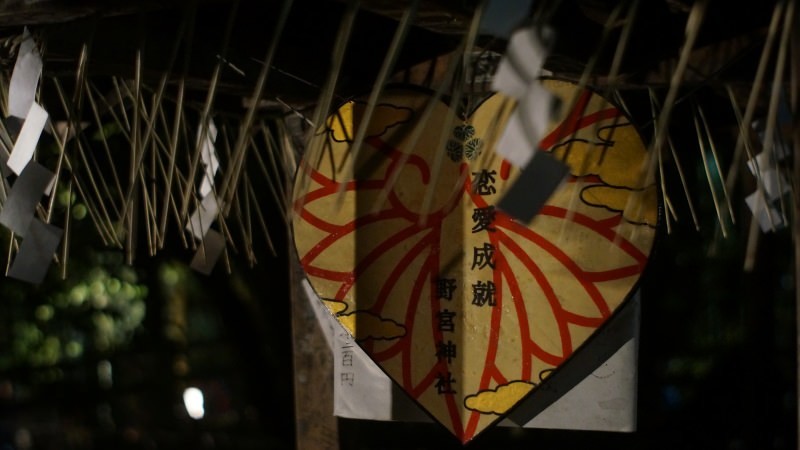 After Okochi Sanso Villa and the bamboo grove, we headed toward Nonomiya Shrine, where you can pray for good marriage luck or for good test scores. As you can see in the picture, the heart is a popular symbol in this shrine. It is a small shrine, but there are many tori gates there and it is a charming little place. 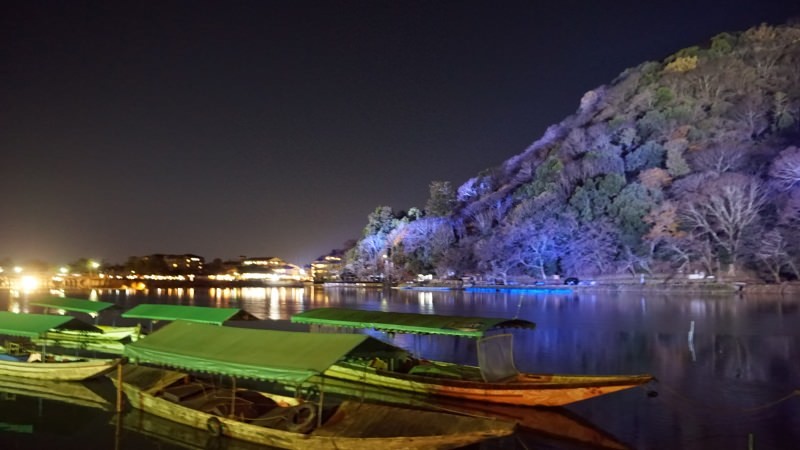 After this it was time to head back and cross the Togetsukyo Bridge a second time, and then head to Horin-ji Temple. At Horin-ji Temple they had a projection mapping light show that made the temple seem completely different from normal. It was like going into the world of Harry Potter, just with a Buddhist Harry Potter. 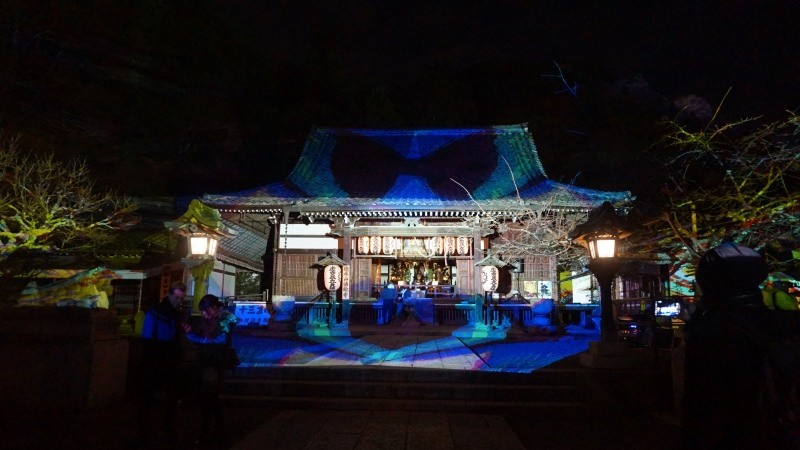 This is not your grandfather’s temple visit. The lights change color and the temple is blue for a moment and red the next. If you look down from the entrance, you will see countless lanterns lining the stone stairs. 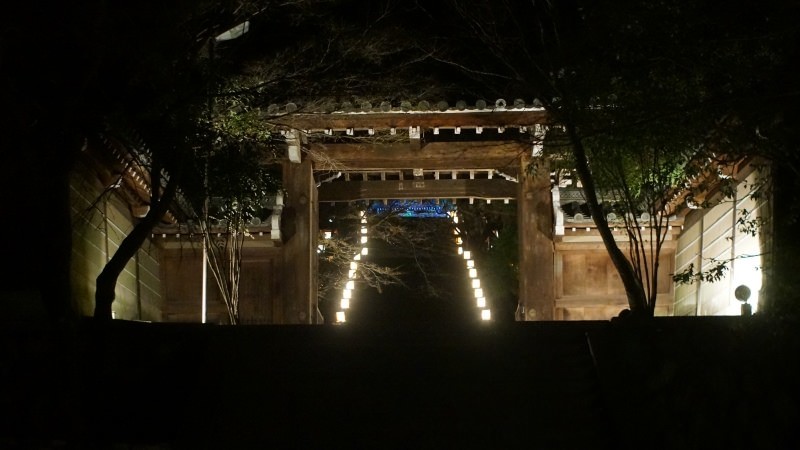 This is the view you find if you look up to the temple. It is almost as if you were going to face the last boss of a Nintendo game. Also, you can see the projection mapping show for free! So it is definitely worth a visit. 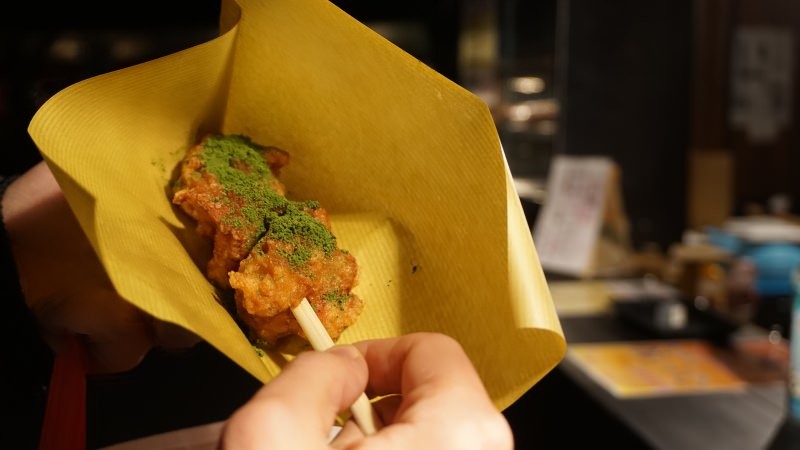 Before we went back to Hankyu Arashiyama station to take the train back home, we had to have some kara-age fried chicken. And we had our chicken with matcha salt! The matcha salt brought out the taste of the juicy chicken nicely, and it tasted even better than I had thought. Plus it was only 300 yen! A steal for a festival in Kyoto.

In the end, this event is one of the most beautiful ones in Kyoto. You can enjoy the Hanatoro event for free too, if you don’t go to the temples the villa, although I recommend you at least go to Okochi Sanso Villa. 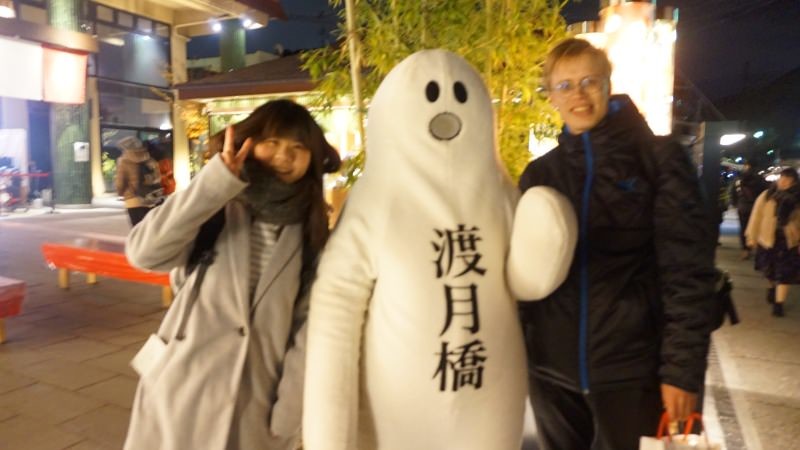 As a bonus, we also got to see Tsukihashi Wataru-kun! He is a mascot character for the Arashiyama area, and takes his name and looks from the Togetsu-kyo Bridge, his name being just another reading of Togetsu-kyo. He was really adorably terrifying, and the cutest terror of the night I have ever laid my eyes upon.