A Look at the New Kyoto Based Anime HELLO WORLD!

A showcase of the movie “HELLO WORLD” and places featured in the film.

Like every day has been enriched by something? So… we went and saw the movie “HELLO WORLD.” In this article, we’ll try our best to avoid spoilers while giving our thoughts about the film and will deliver you a short report on the live greetings the voice actors gave in Kyoto.

One day during a meeting, our editor in chief enthusiastically brought up the fact that there was going to be a new moving set in Kyoto coming out. I thought “We have to go see it!” and entered my name into the pre-screening ballet… and what do you know, I won! As the actors who voiced the characters were going to be there, I quickly finished up my work and began making my way to the venue, which was the Higashi Honganji Temple.

Getting off at the Gojo Subway Station, I began heading toward Kyoto Tower when… 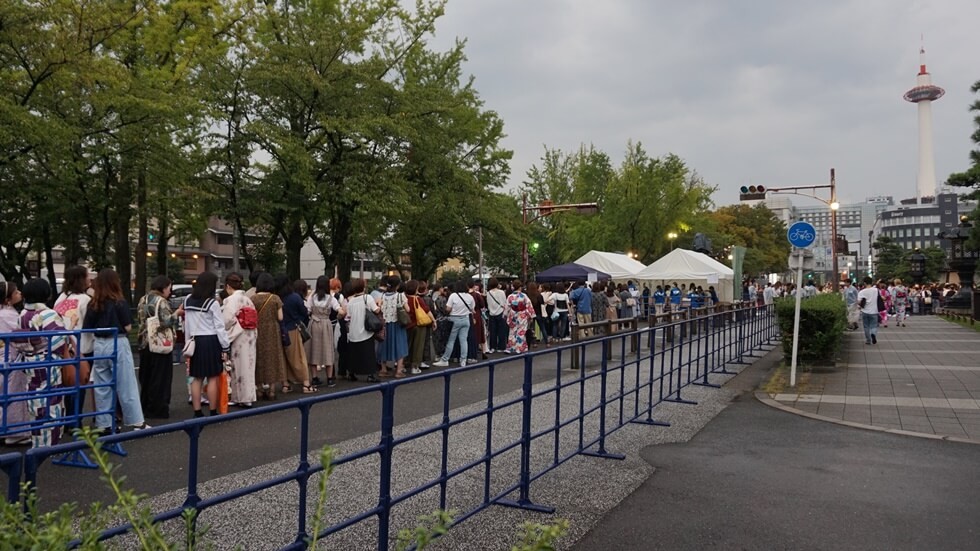 I came face to face with a huge line of people who were already waiting even though the event wouldn’t start for another hour!

Most of the people in line were girls too! Which wasn’t much of a surprise were about to meet actors Takumi Kitamura, Tori Matsuzaka, and Minami Hamabe! 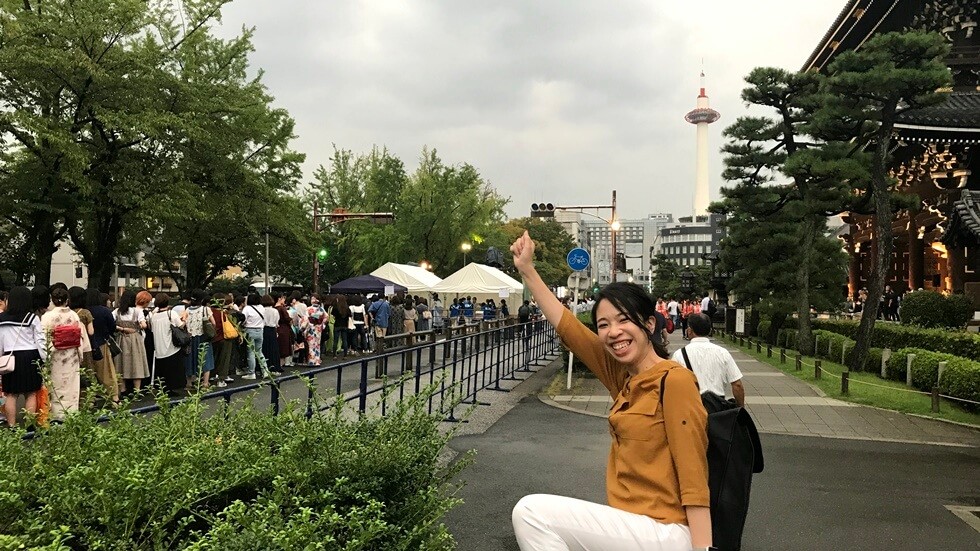 With plans of stealing the best in the house to see Tori-kun, I rushed into the venue. 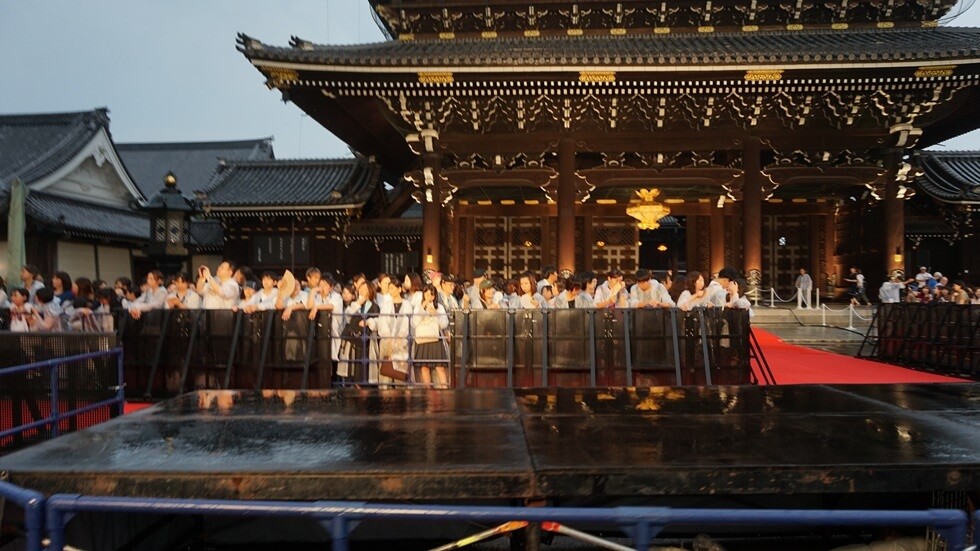 There were so many people…

However, more than that, being able to see the red carpet at the Higashi Honganji Temple felt incredibly special. That’s because, of the temple’s 400 years of history, this event was the first of its kind ever. This gesture really showed just how much Kyoto was getting behind HELLO WORLD. 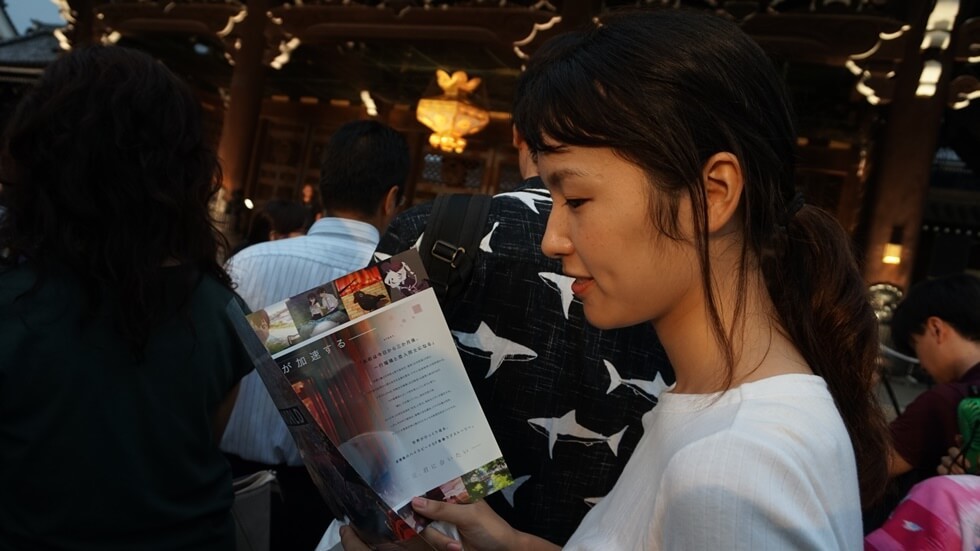 “We still have time till the actors come on stage, so let’s read up about the movie! – New writer and massive otaku Sakurako.

Following this statement, Sakurako then went on to really make sure that I knew Director Tomohiko Ito was going to be fundamental to the future of Japanese animation.

Apparently Tomohiko Ito was assistant director on “The Girl Who Leapt Through Time” and “Summer Wars” and lead director on the anime adaption of “Erased.”

Character designs for HELLO WORLD were done by Yukiko Horiguchi of K-On! fame, and the voice of the all-important crow character, Karasu, was played by Rie Kugimiya of Tokyo Ghoul and Pokemon fame.

Wow, that’s some lineup. Although I don’t watch much anime, even I’d heard those names before. With such an incredible cast, this movie must be good!

While I was being lectured on anime, we began to hear screeches from the crow.

Three of the cast members had made their way out! As they were so sorry that we had to wait in the rain, they let us take photos for 1 minute. And this is what we snapped! 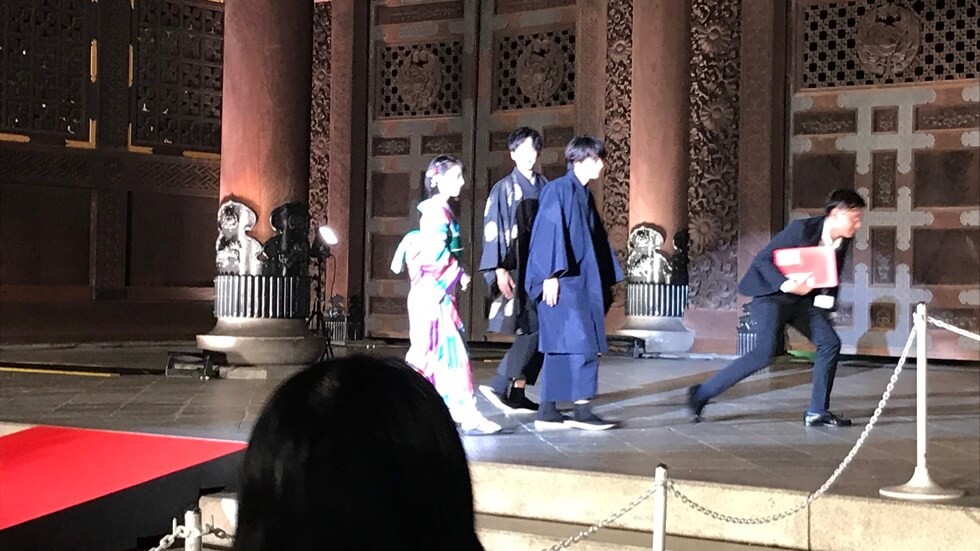 “The lights, they’re so bright! I have no idea who these people are!”

Rest assured, I checked with my own eyes, it was in fact stars Takumi Kitamura, Tori Matsuzaka, and Minami Hamabe.

“They all have such supple faces! So cool! So cute!” – Me

For those wanting to see a video of the event, check the official Sharing Kyoto twitter.

After speaking about the movie and their respective roles for half an hour, the cast bowed out.

But this is where it really begins! The outdoor pre screening at Higashi Honganji Temple!

Everyone took turns to movie inside the shrine, where we put the Kyoto Tower to our side and faced the screen.

This night felt so amazingly over the top.

Below I’ll introduce you to the general story of the movie.

Protagonist Naomi is a male high school student living in Kyoto. One day, he suddenly meets himself from 10 years in the future. According to future Naomi, present Naomi will start a relationship with classmate Ichigyo, but before they can play out their youth together, she will be killed in an accident.

In order to save Ichigyo, High school Naomi and future Naomi team up, accidently uncovering a huge secret that lay hidden in their world.

To find out what happens next, check out HELLO WORLD for yourself!

What I thought after finishing the movie…

・As was rumored, it was a roller coaster of twists and turns that happen so fast that you’re never sure what will happen next.

・The use of realistic Sci-fi was exciting, and the color palette in the film was beautiful.

・The film was packed with other famous and main spots around Kyoto thrown in there, and it made me want to go to Kyoto.

For spoilers sake, that’s all I’m going to say.

For those going to see HELLO WORLD, we’ve compiled a list of spots that feature throughout the movie. 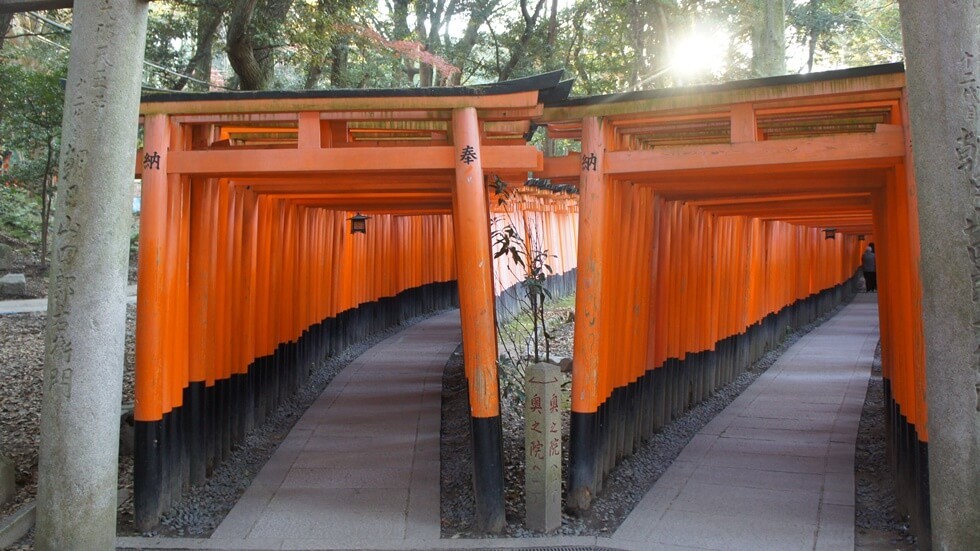 During the first important scene, this is where Naomi gets… 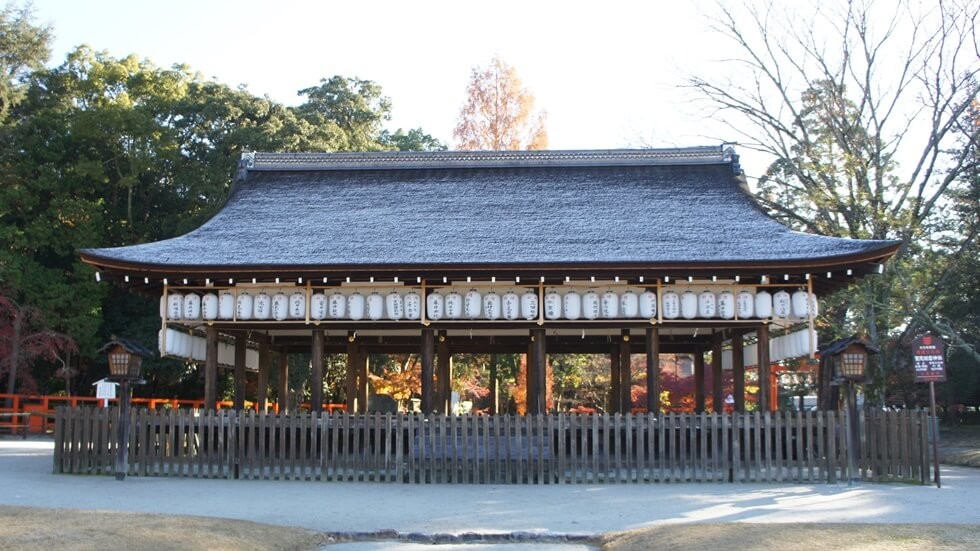 This shrine features prominently in the second half of the movie.

It’s also the spot where the story takes an important turn. 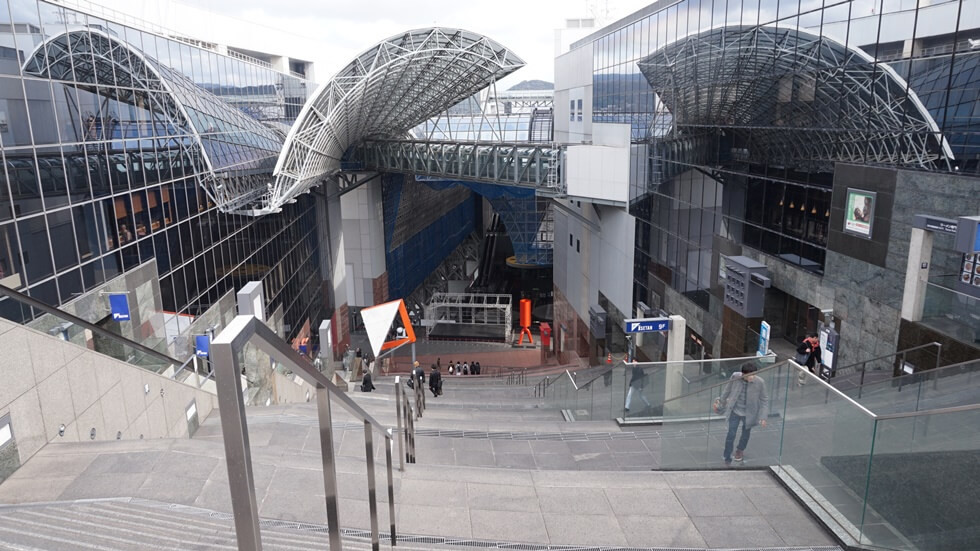 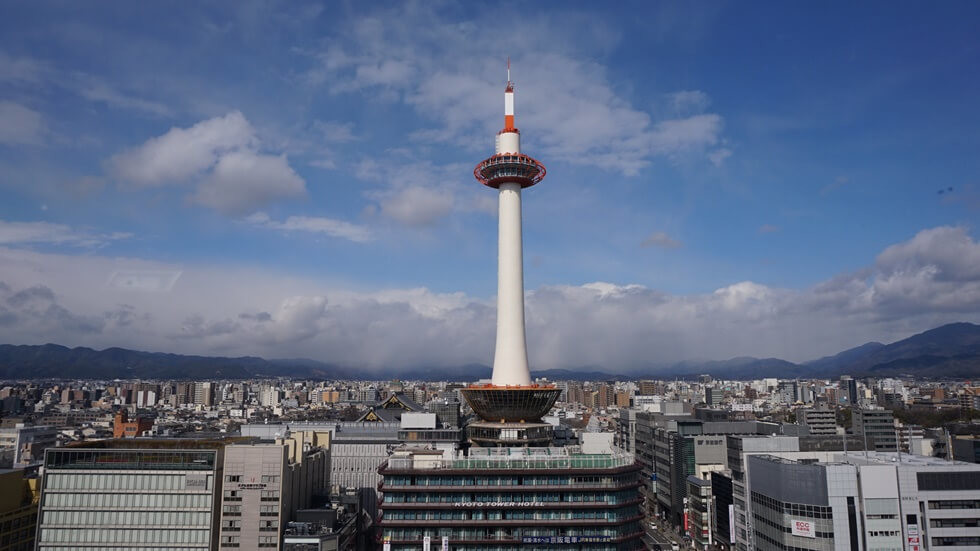 Kyoto Station and Kyoto Tower feature in the final climax of the film.

Each scene and each moment is depicted realistically, so whether you’ve been here before or are planning on coming here, I’m sure you’ll get super excited while watching this movie. 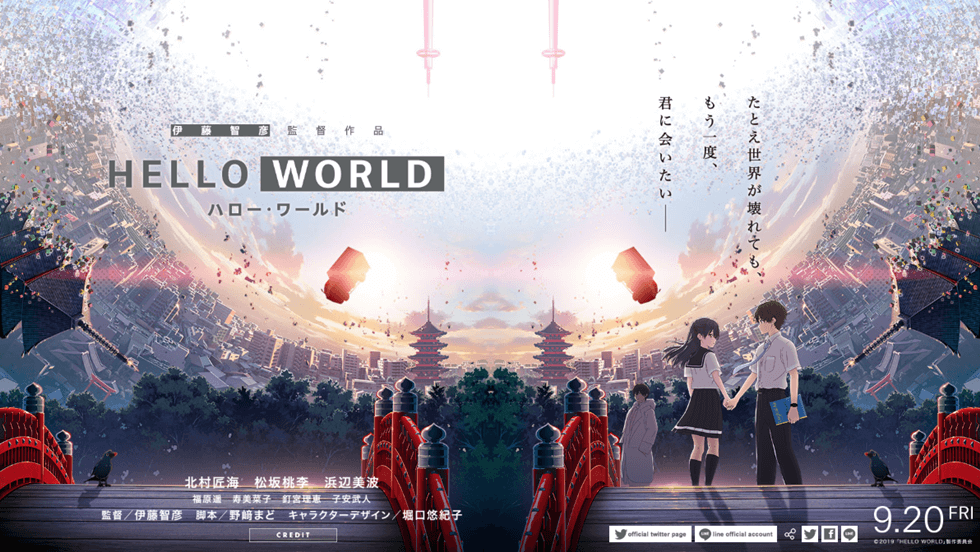 Also featuring heavily in the moving poster, the final prominent spot of the film is this red bridge. 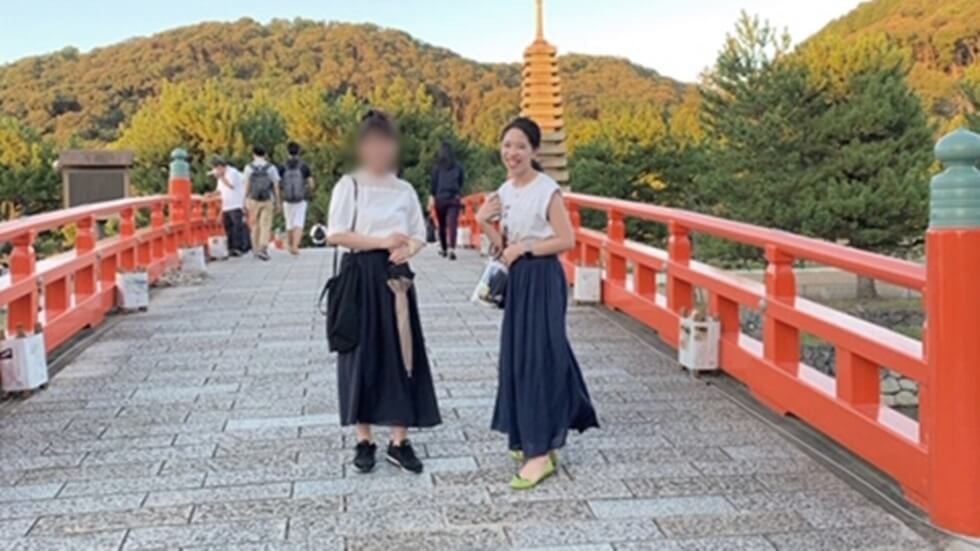 Completely unintentionally, I’ve taken almost the exact same picture outside of work before! This is the Kisen Bridge and it crosses the Uji River, right in the heart of my hometown .

I feel like there are going to be a lot of people coming here to take the picture from the movie now.

This spot is located only a 40 min train ride out of Kyoto City, so if you have the chance, definitely come on down to Uji.