The Spring Special Entrance to Kodai-ji Temple only comes once a year! And this year, we also got to see incredible artwork by two Japanese artists, who specialize in the manga style of Japanese art! This is a very special Japanese temple-experience, which only gets more romantic the later it gets in the evening!

An event at Kodai-ji Temple with sliding door artwork especially drawn for it by Baron Yoshimoto and Katsuya Terada? There’s no way I could miss it! There is something very modern about this combination, and it all feels like a breath of relaxing fresh air for Kyoto. So let’s go and take a closer look at it!

The Spring Special Entrance to Kodai-ji Temple is extra special in 2018, as there is an exhibition by Baron Yoshimoto and Katsuya Terada at the temple. 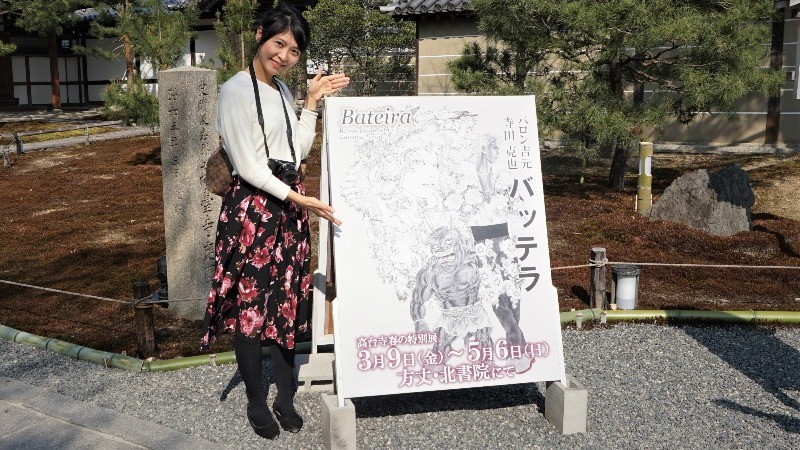 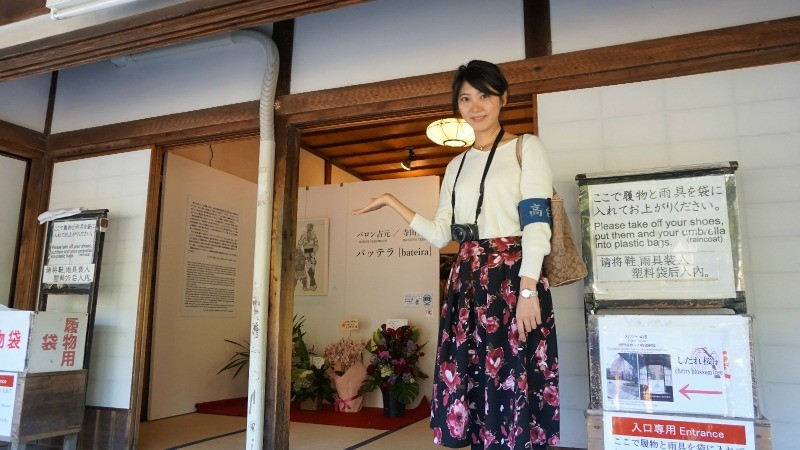 When you get to the temple, you have to take off your shoes when you go inside and walk on the tatami mats. What’s great is that you can freely take pictures inside! 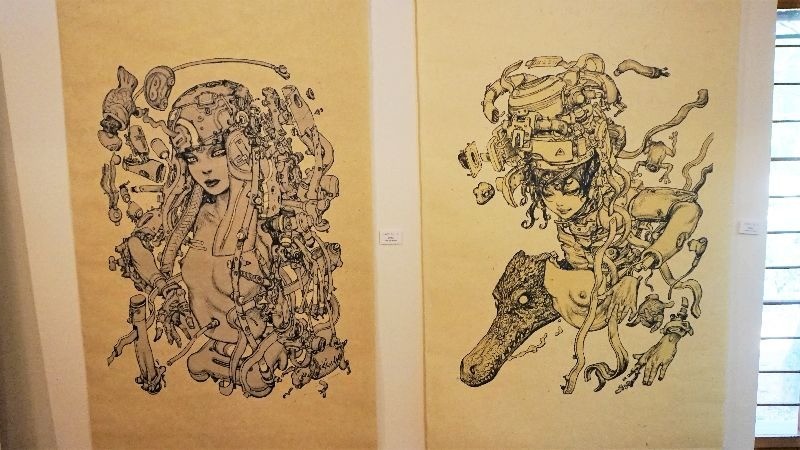 The hanging scrolls on the walls are cool, and if you look at them carefully, you will not only see that they’re exceptionally drawn, but also that they’re both actually pictures of androids! 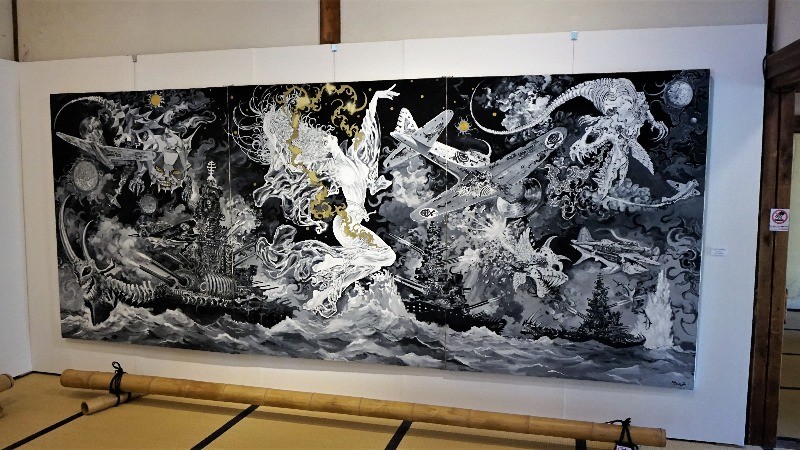 This picture is beautiful, but it actually depicts a war scene, and its pure whites contrast with the dark blacks. I stood a long while in front of it, contemplating the meaning behind it. 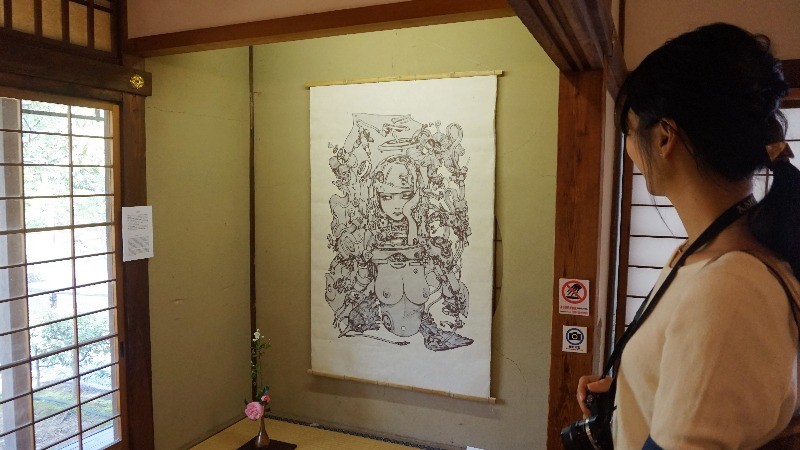 This tearoom has a manga-inspired painting on its walls, whereas normally there’s a Chinese or Japanese proverb written on a hanging scroll. This felt very novel to me. 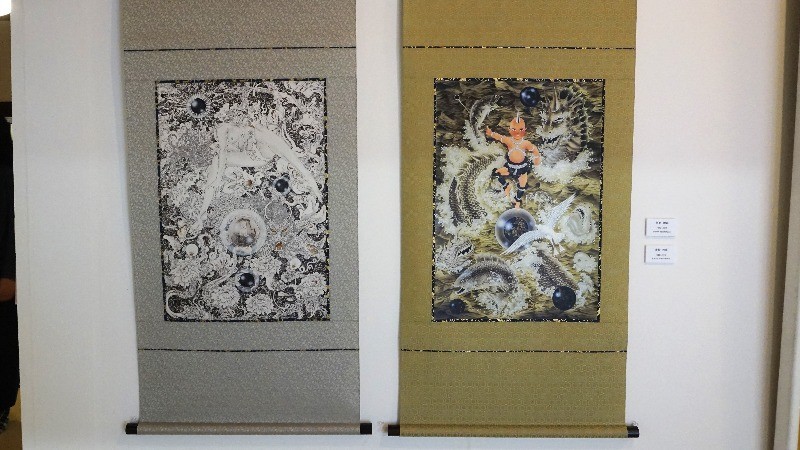 Here you can see two new paintings by Baron Yoshimoto, with a different drawing technique, named “Coyness” and “Tendo” respectively. 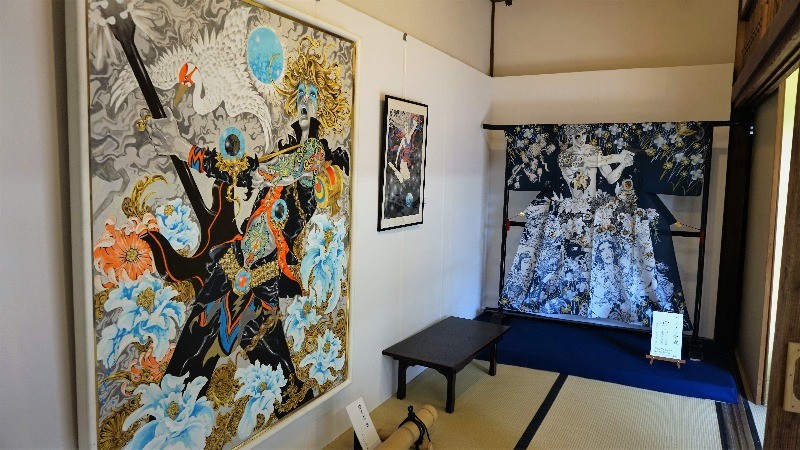 The painting on the left is called “The Leaning One B,” and it has a rock ’n’ roll style to it, with its vivid colors, but it still has a Japanese essence to it. And on the right, you can see a yukata which has drawings by both Baron Yoshimoto and Katsuya Terada on it. It would be so cool if you could wear it! 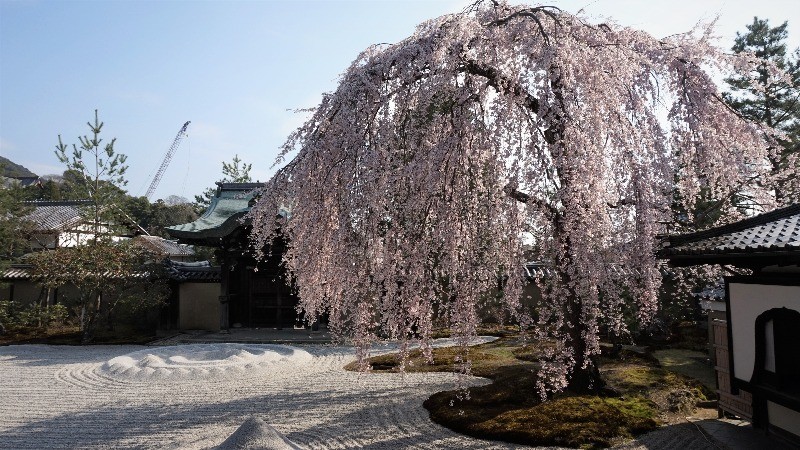 When you continue on, you come to a Japanese room from where you can see this beautiful weeping cherry tree and rock garden. Everyone was taking pictures here! 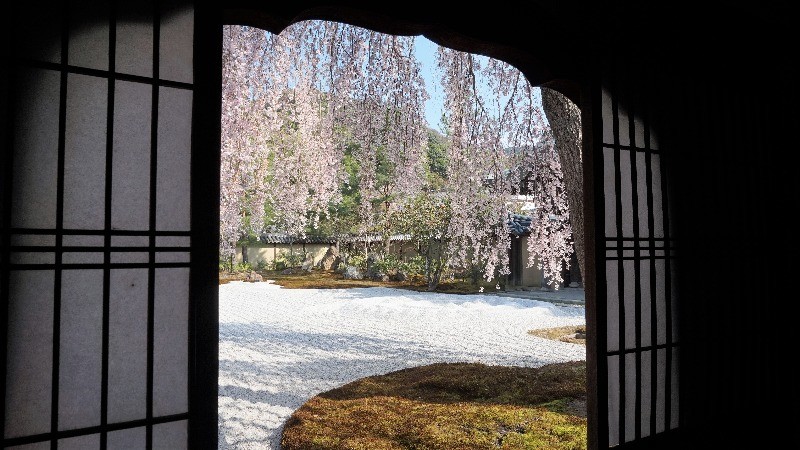 You can also come see this view at night when the garden is illuminated by lanterns, and it’s easy to get inebriated by the romantic view. 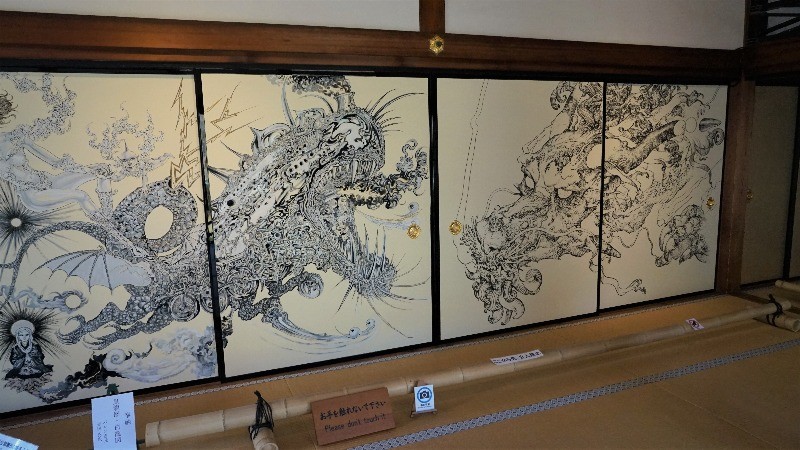 My image of sliding door paintings was of frolicking animals and scenery, not of dragons! It almost feels as if they were really moving. The one on the left is by Baron Yoshimoto and the one is by Katsuya Terada. 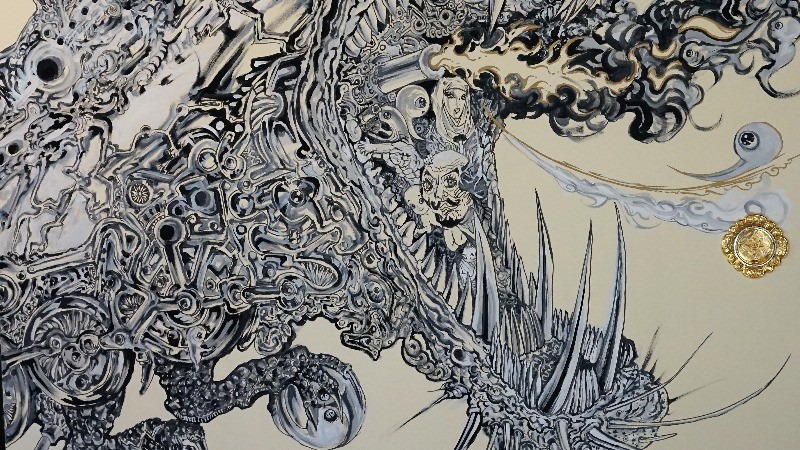 There are two dragons, but they’re different: if you look carefully at the one by Baron Yoshimoto, you can see that even though it almost looks alive, it is mainly made out of machinery, and you can even spot the wife of Toyotomi Hideyoshi, Nene, who became a nun after the death of Toyotomi. 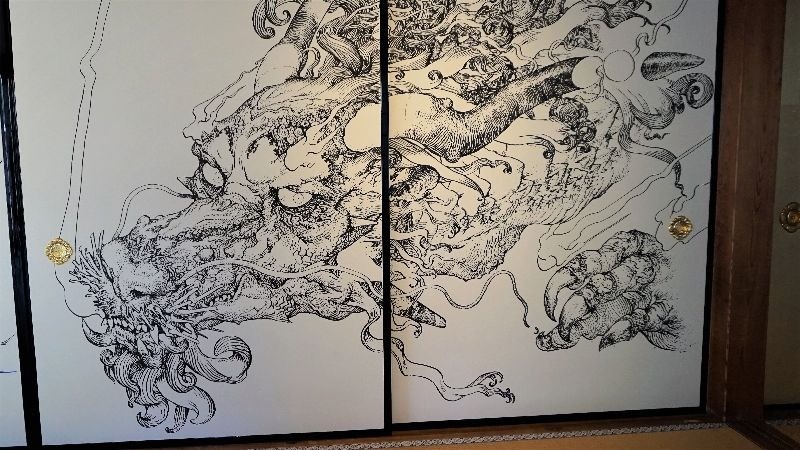 The white dragon by Katsuya Terada has a lavishly drawn head, and it makes a worthy adversary to the black dragon. It took the artists a week to draw the two dragons on these four doors. The painting is aptly called “Black Dragon – White Dragon.” 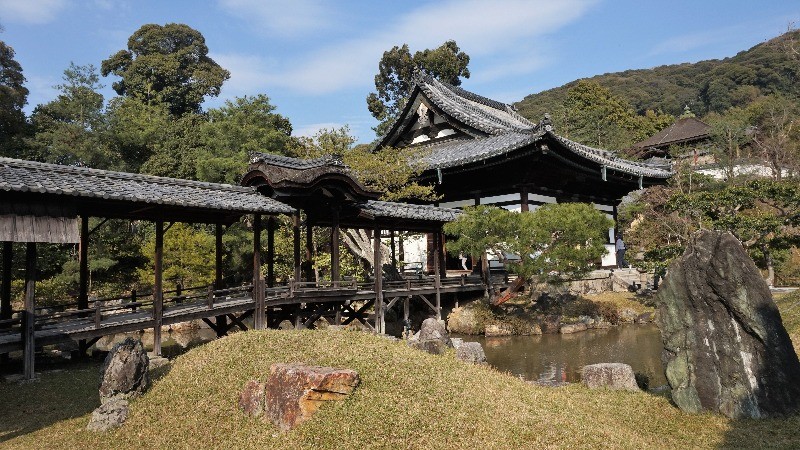 After appreciating the beauty of the exhibition, you get to see a beautiful walkway-bridge over the pond and enjoy the view to the Japanese garden and the mountains. A truly peaceful sight. 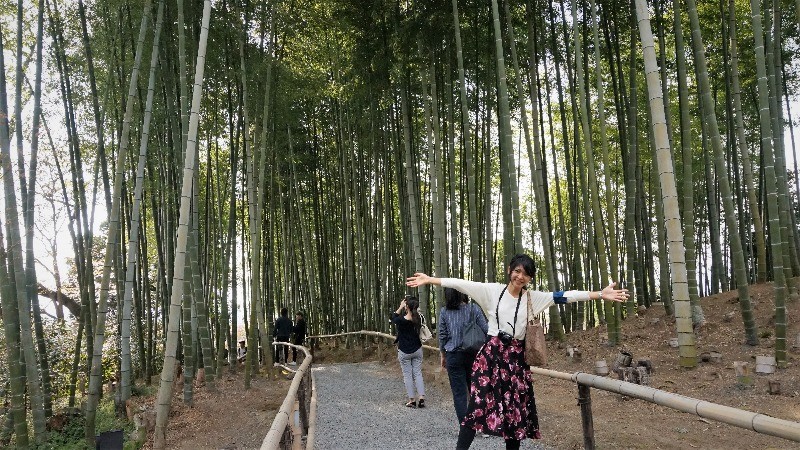 There is also a bamboo grove at the temple, just like in Arashiyama! You get to see the bamboos shooting up to the skies, and it is refreshingly cool inside the grove as the sunlight is dispersed by the tall bamboos. There is something mysterious about scenery like this. 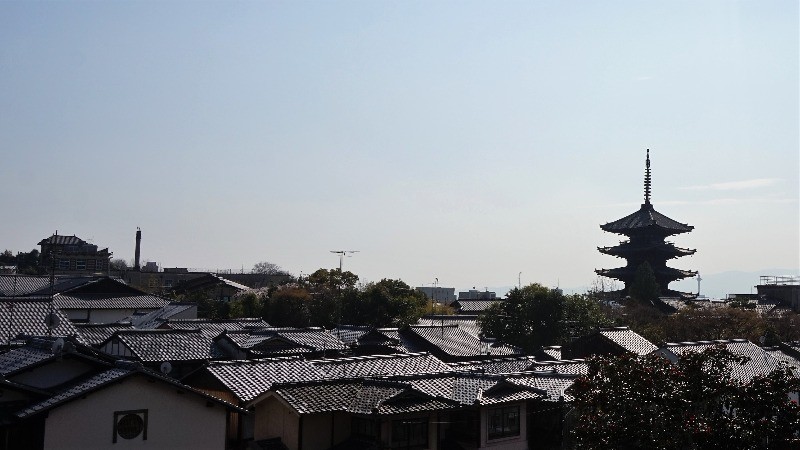 Kodai-ji Temple has a long history, and it’s beautiful all year round, and different every season. And this time for spring they also have a manga exhibition, making the temple feel somewhat avant-garde! You can only see “Black Dragon – White Dragon” at Kodai-ji Temple, so be sure to go to Kodai-ji Temple when in Kyoto!

*The dates for the Bateira exhibition are the same.