Pilgrimage to the holiest of the autumn leaves spots in Kyoto: Mount Takao!

My first trip to Takao, and although it’s very cold up in the mountains, the autumn leaves were so pretty I forgot about everything else! But remember to wear walking shoes and warm clothes when you go up the mountains!

It was my first time in Takao, and although it was really cold, it was so beautiful that I felt really moved! I especially liked Jingo-ji Temple’s autumn leaves, and I think the memory of them is going to stay with me for the rest of my life. But remember to wear warm clothes and walking shoes when you go to Takao! It can get pretty cold since the temples are high in the mountains.

Takao is located in a very mountainous area, but it’s one of the most famous areas in Kyoto to see autumn leaves. The most famous spot for the leaves in Takao has to be Jingo-ji Temple, but Saimyo-ji and the World Heritage Site Kosan-ji are also very nice. Besides driving to Takao, your only other option is taking a bus. 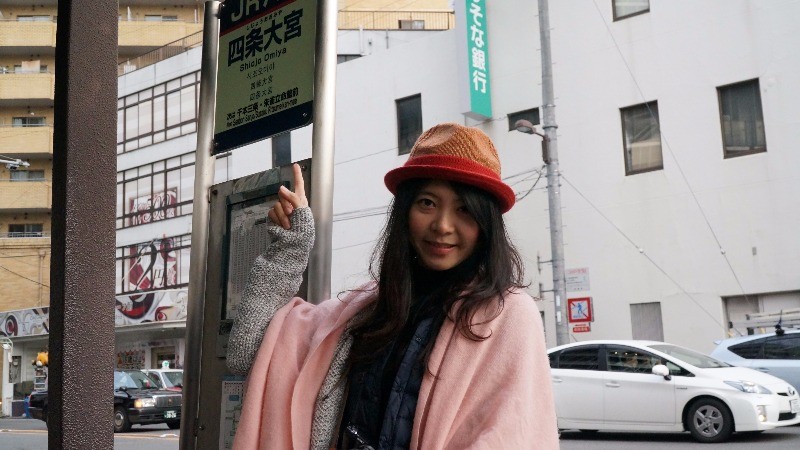 So early in the morning, it was time for Vanessa to head to the bus stop in Shijo Omiya and take the JR bus toward Takao. At first, I thought that by taking the 7 a.m. bus I would be guaranteed a seat to sit on, but you shouldn’t look down on the crowds in Kyoto in autumn. I had to stand for quite a while before I got to sit down! 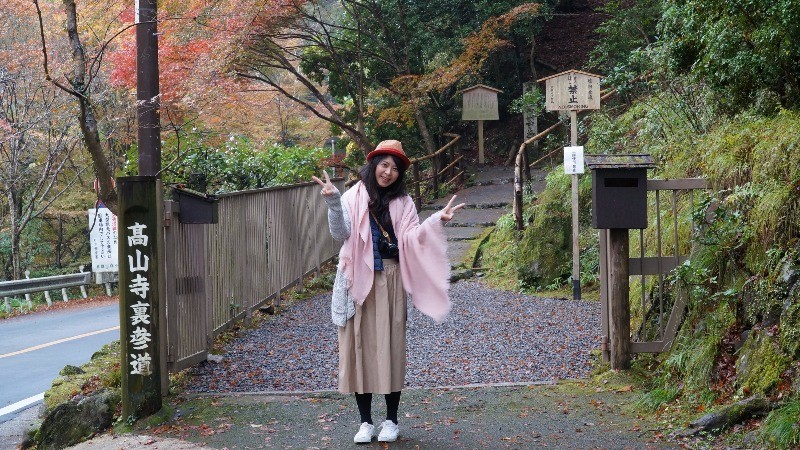 The first stop for the day was Kosan-ji Temple. The air was cold and crispy, but it felt nice and fresh to breathe in. Walking up the path to the temple on the fallen red leaves I almost felt like a Hollywood star walking on the red carpet to the Oscar gala. 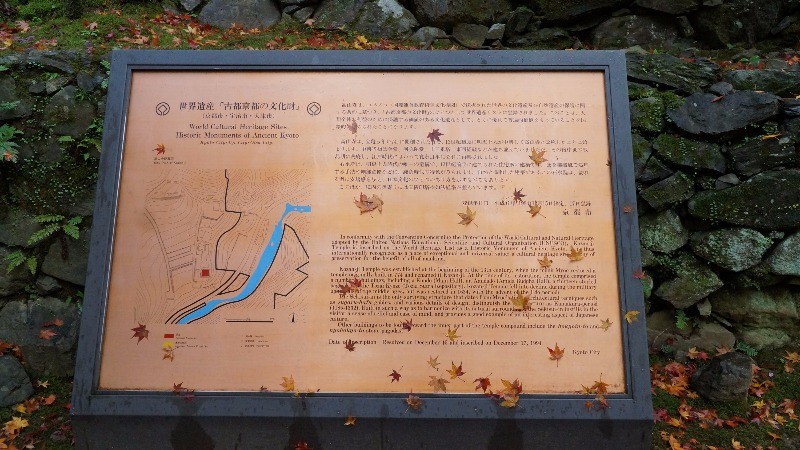 Kosan-ji Temple, which is also a World Heritage Site, has a 500 yen entrance fee to the temple area in the autumn leaves season. Except for the autumn season, you don’t have to pay this 500 yen entrance fee. At the temple, you can also find the oldest tea farm in Japan since Kosan-ji is the place where tea farming first began after Zen priests brought the drink to Japan from China. 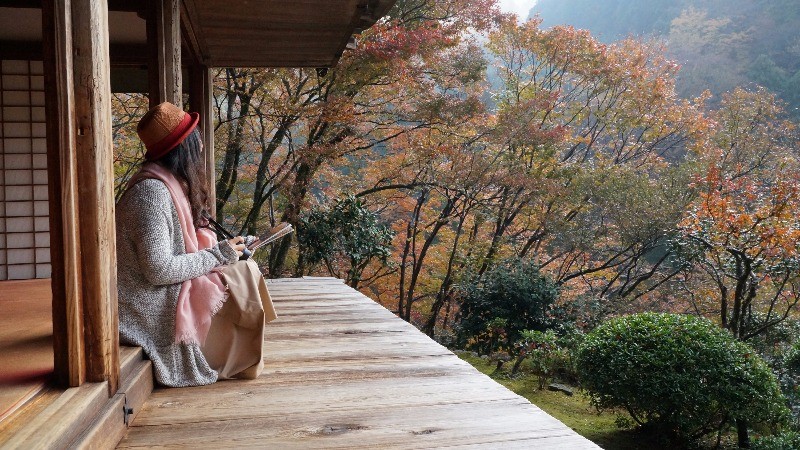 Sekisui-in is the oldest building of Kosan-ji, it dates from the Kamakura period around 800 years ago. It and its garden are not only exceptionally beautiful, but you get to also see the famous picture scrolls of Choju-Giga, or Scrolls of Frolicking Animals and Humans at the main hall at Sekisui-in. You need to pay 800 yen to get to see Sekisui-in but sitting on the edge of the building and looking at the beautiful mountain scenery below is well worth it. If I’d have to explain this experience with only one word, it would have to be relaxing. 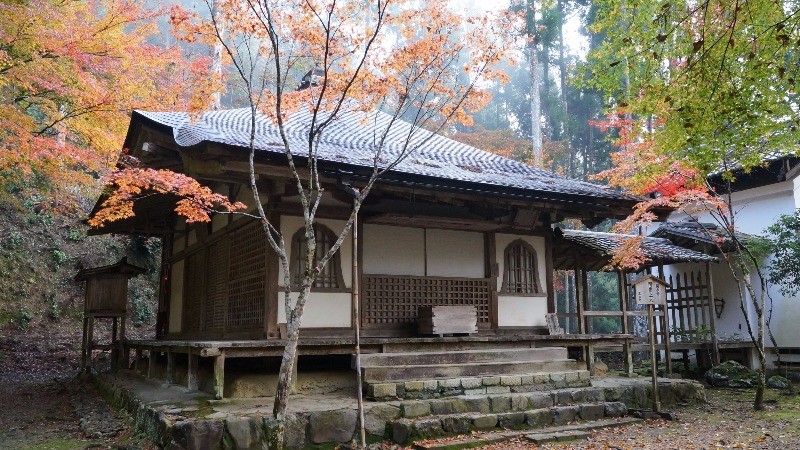 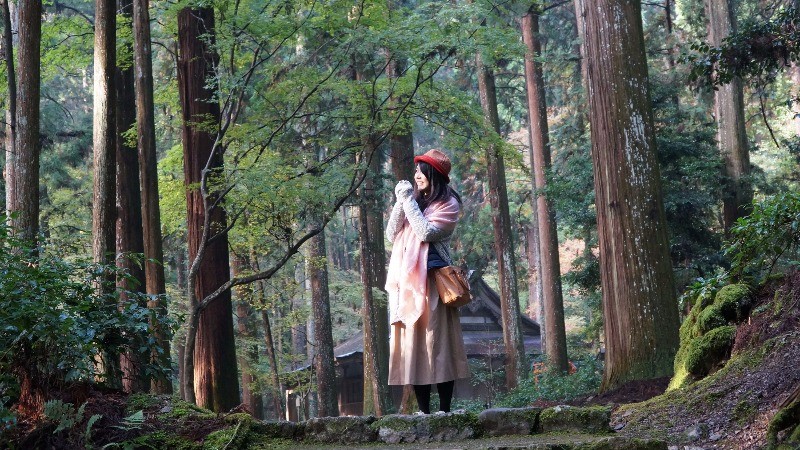 There are not that many buildings at Kosan-ji Temple, but even more trees, and the atmosphere is a bit on the mysterious side. It’s really relaxing standing in the middle of the trees, and you can almost feel like you could be a part of the forest! 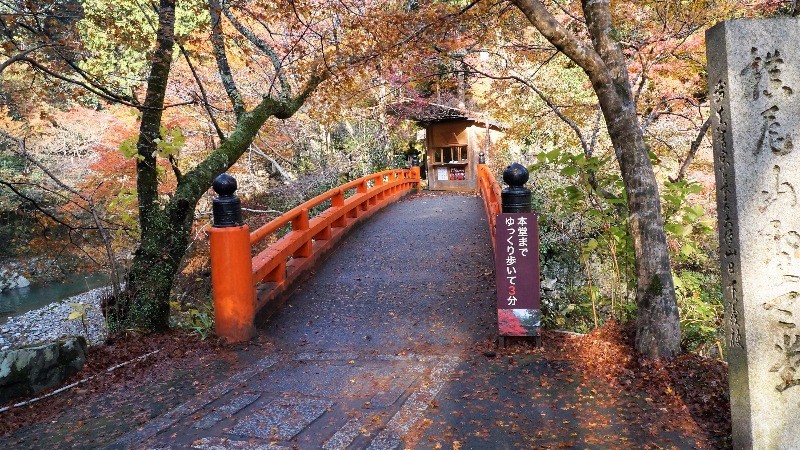 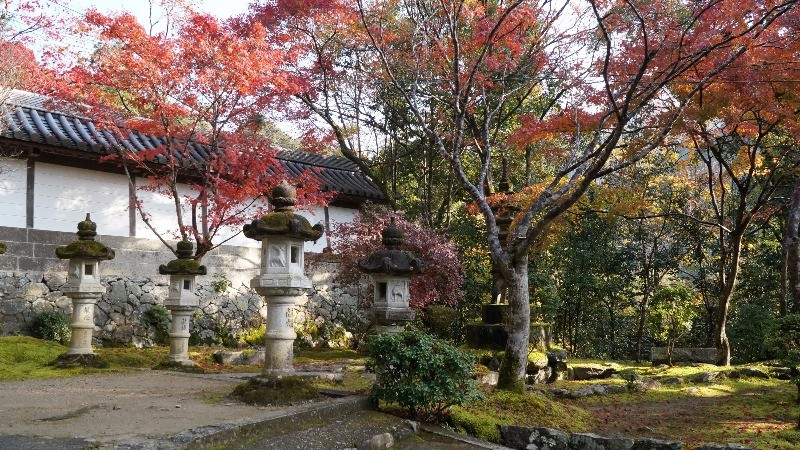 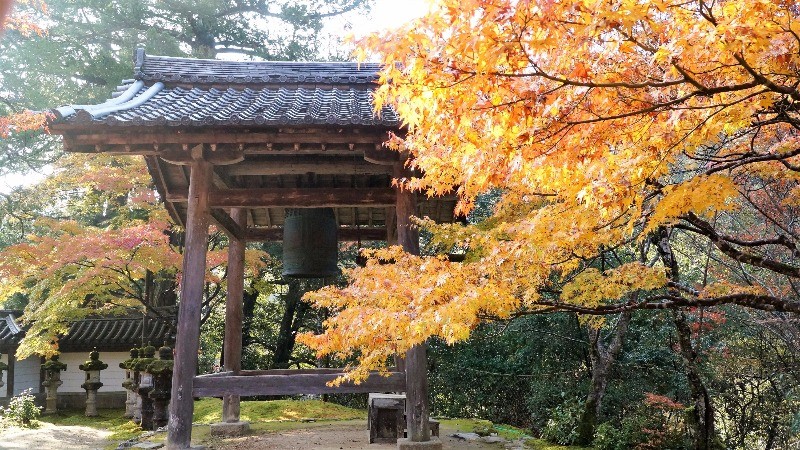 At Saimyo-ji Temple you can get to see a masterful example of Japanese Buddhist carving, in the form of a 1000-year old statue of Sente Kannon, thousand-hand-Kannon. The priest at the temple can also tell you about the statues in fluent English, so if you have time, remember to strike a conversation with him. 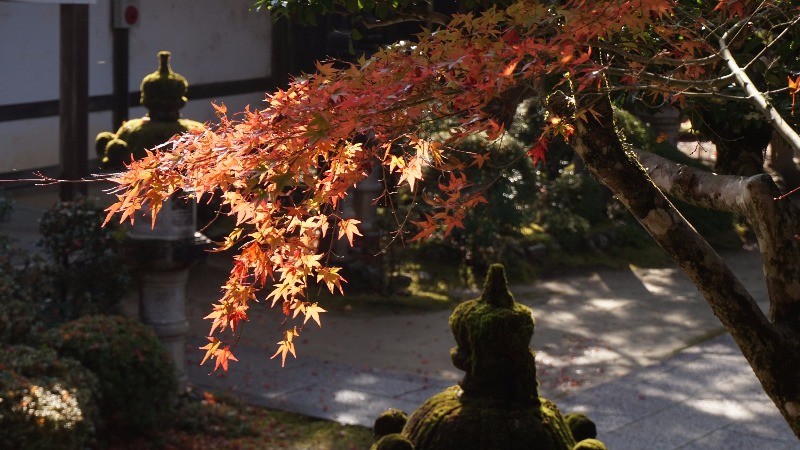 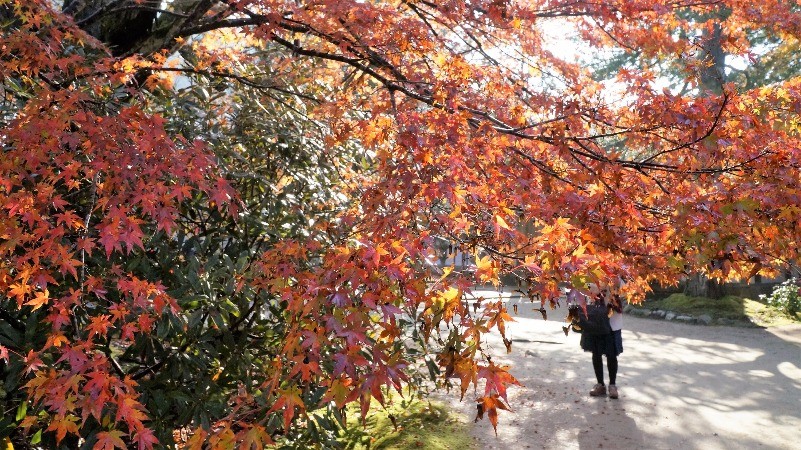 Getting to see the beautiful garden and autumn leaves is something so remarkable that it just calms you down. You don’t have to worry about anything mundane, everything feels like it has some higher quality to it. 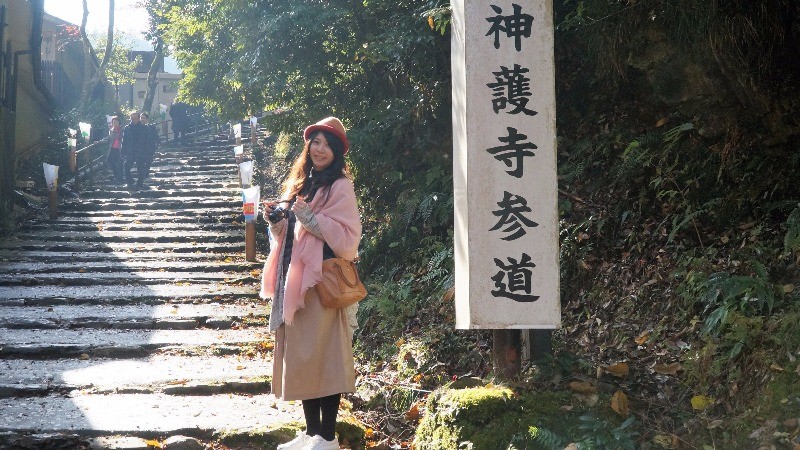 Last, but not least, we went to Jingo-ji Temple. But going to all these temples requires quite a bit of stamina. But finally I was here! But now I had to go up the stairs… going to see autumn leaves in Kyoto is really good exercise. But at least you won’t feel cold when walking up the stairs! 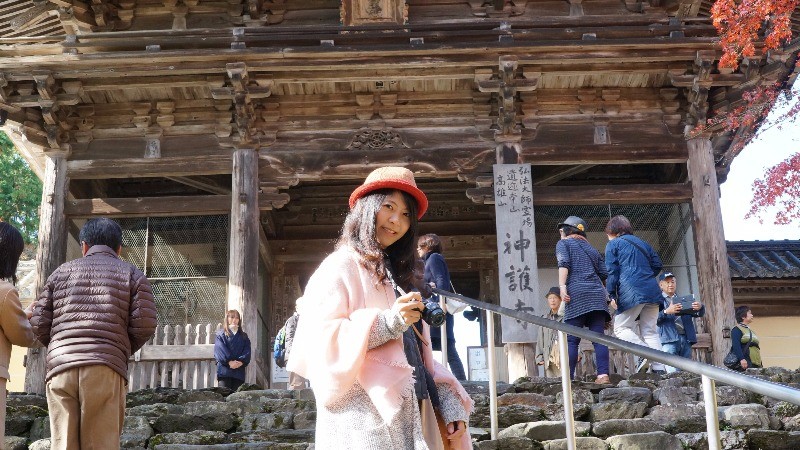 After walking up the stairs for something like 15 minutes I’m at the temple’s main gate! 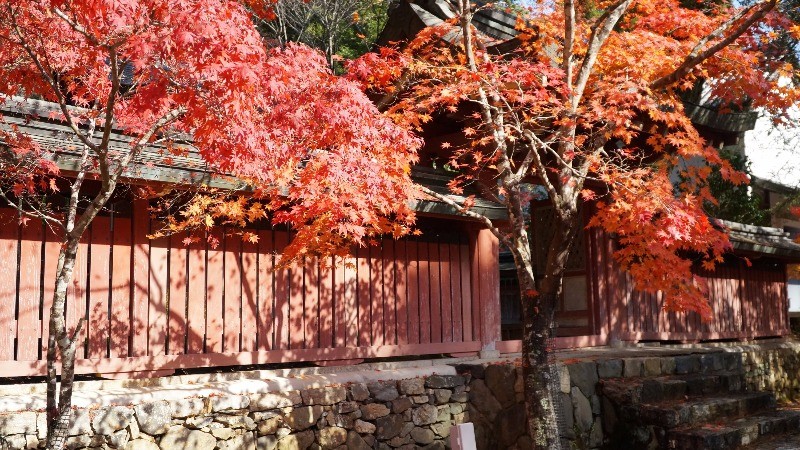 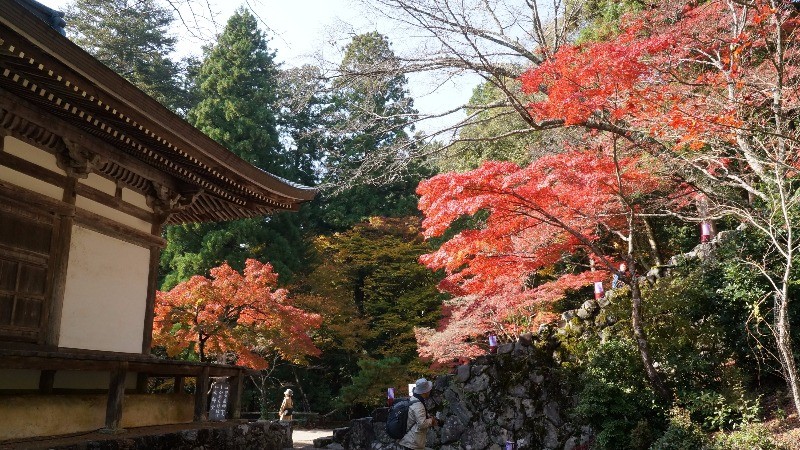 The view was breath-taking! 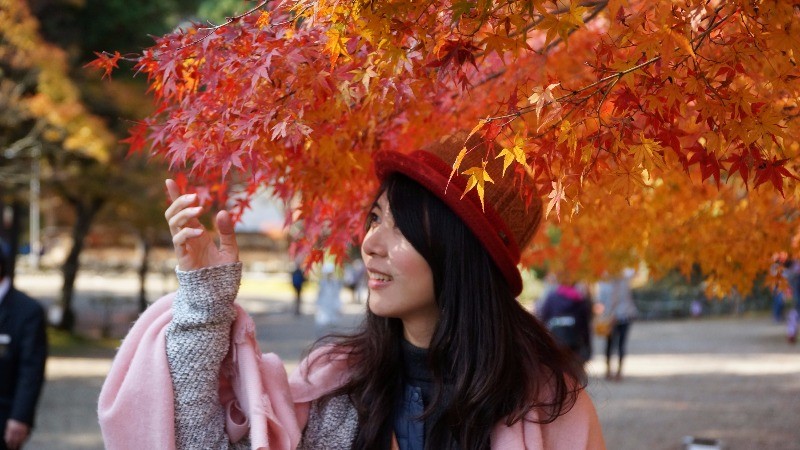 At Jingo-ji, it felt like everything around me was either golden or in vivid shades of red, and this made me feel really excited. 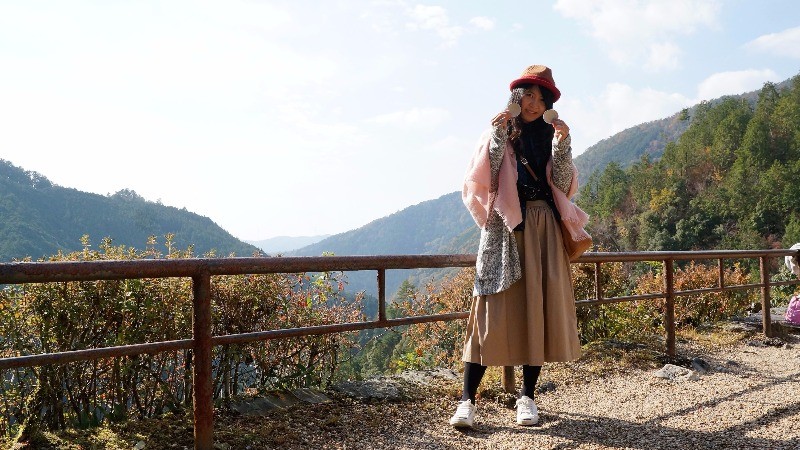 At Jingo-ji Temple, there is one other thing everyone should try, and that is throwing a plate from the top of the mountain. This is said to keep calamities away. 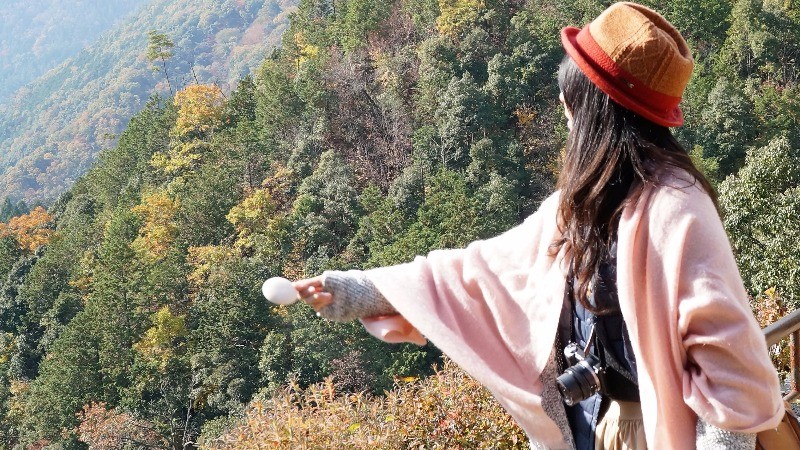 So I tried my hand at this too! After praying that everything would go well, and that I’d get to be happy, I threw my plate, but it didn’t fly that well… looks like you need some practice at this! 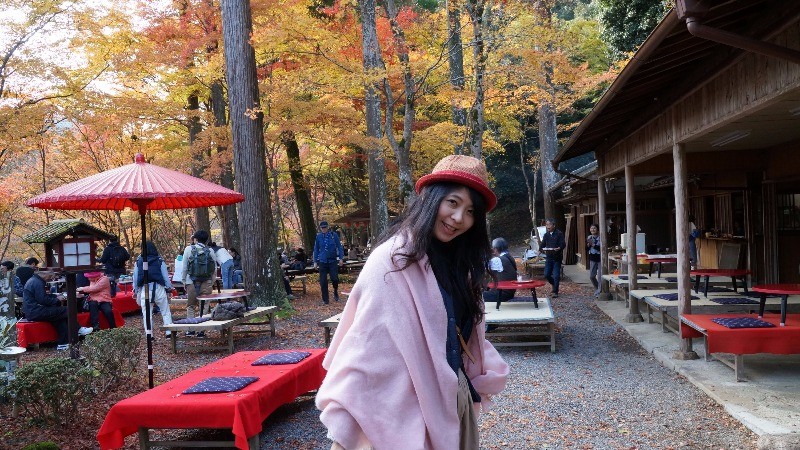 And there are even places at Jingo-ji where you get to sit below autumn leaves and enjoy some very good Japanese food. So of course I went to one of these restaurants, and had a small picnic there! 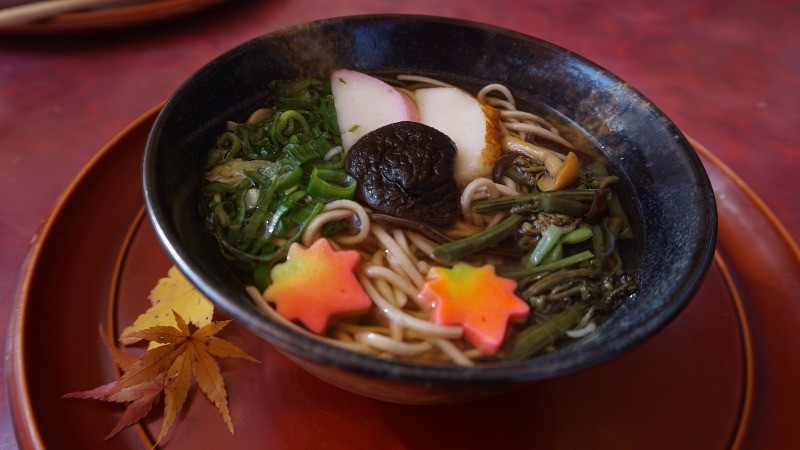 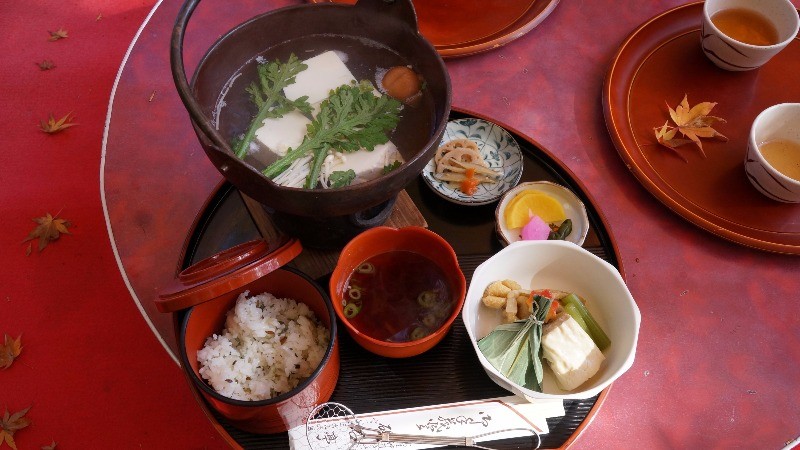 So, I and the cameraman got some piping hot autumn leaves soba noodles and yudofu! It was the first time for me to eat lunch under autumn leaves this pretty. 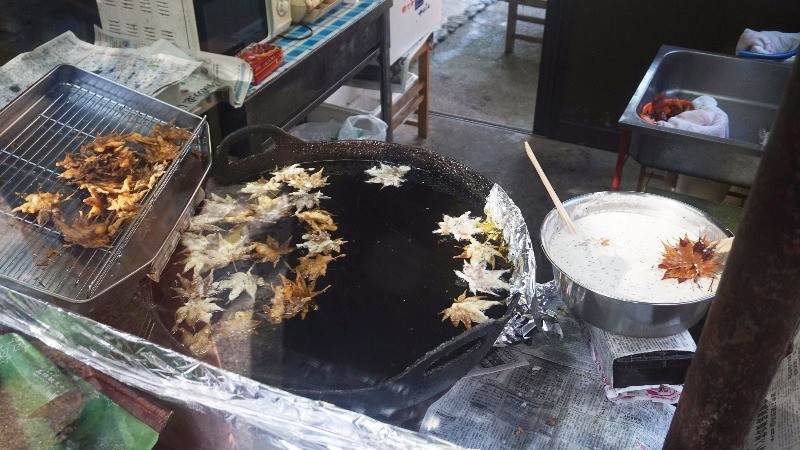 As a dessert snack, we decided to have the famous Takao autumn leaves tempura! It was sold on the way back to the bus station. And yes, they’re deep frying real autumn leaves! 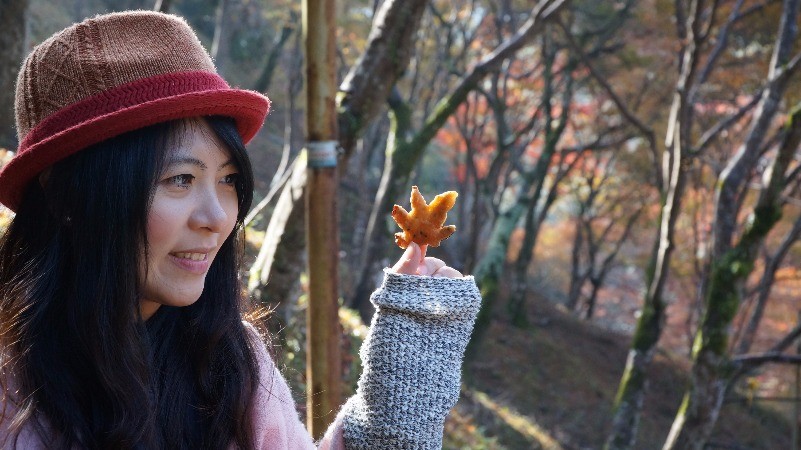 They taste a bit like cookies and have a little bit of sesame in the taste. These would be great on the bus trip back to Kyoto Station or as a snack at home. 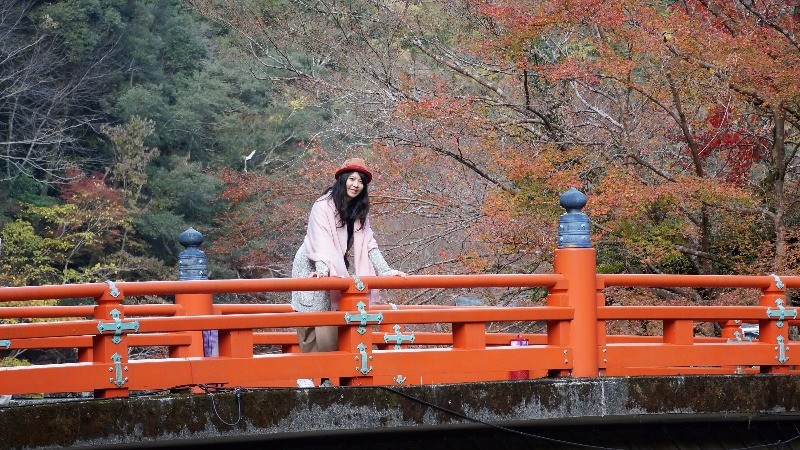 Although Takao is a bit far from Kyoto, going there is still worth it. And it’s not as crowded as some spots like Kiyomizu and Toji temples, and you get to be surrounded by nature, so what’s there not to like? If you want to get away from the crowds, how about taking an early bus to Takao like me!