I went to kaiseki restaurants to learn about the incredible world of kaiseki cuisine!

I wish to let the people of the word know more about Japanese cuisine. And what better way to do this than to write about the ultra-seasonal kaiseki cuisine is there? This cuisine lets you feel the unique traditions and culture of Japan. But not many people even in Japan eat kaiseki (me too, I have only eaten kaiseki a handful of times). So I don’t know what is so great about kaiseki and what great kaiseki cuisine is like. So in order to recommend good restaurants to you, my dear readers, I decided to go to kaiseki restaurants and actually try kaiseki myself! I want to recommend these restaurants by giving them “Yumemi Stars,” a bit like the Michelin guide!

I’m going to explain to you what kind of a restaurant Kyoto Wakuden is. Wakuden was first founded as a ryokan in the Miyama town of Kyotango, on the third year of the Meiji period, in 1870, and later became a restaurant. There are three Wakuden restaurants: the luxurious Kodaiji Wakuden, a bit more reasonably priced Muromachi Wakuden, and the cheapest one, Kyoto Wakuden.

So we sat down and ordered. Course meals here start at 6,000 yen per person, so the prices are cheaper than most other restaurants. You get many dishes, so value for money is good. The price also includes service and taxes, so it really is not too expensive. So it’s a great restaurant for people like me who want to put their foot in the door of the world of kaiseki.

This time we ordered the “Akane” Course for 12,000 yen. The Akane Course contains 9 dishes, and they were all delicious, but here are the three I thought to deserve a special mention: 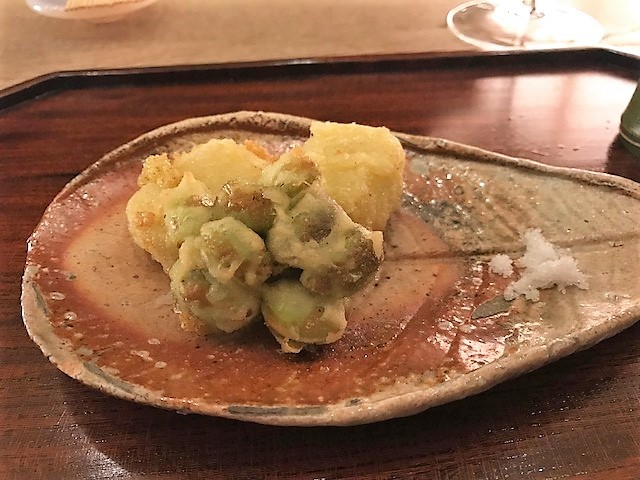 This dish is made from rice cake made with gingko and murasakizukin (edamame green beans) from the Kyotanba region. I was moved by this dish because it made it possible for me to feel the coming autumn.

The ingredients used in this dish are gingko and murasakizukin. We went to this restaurant in September, but both of these ingredients were seasonal at the time. Murasakizukin is only available from the middle of September to the latter half of October, and when I went to Wakuden, I could already see gingko trees bearing fruit.

And when you look carefully at the plate, you’ll notice it’s actually shaped like a tree leaf. Autumn, for many people, probably means that the leaves of trees are going to turn into shades of red and yellow. I thought it nice that they showed the season of autumn in this way on the plate. 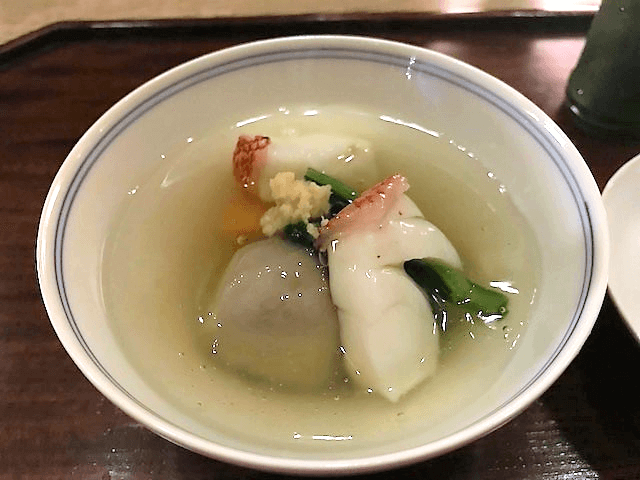 Next, a dish made with amadai (tilefish), taro, and pumpkin.

The nicest thing about this is how beautiful it looks. It’s not made to look too luxurious, but the red of the amadai, the green of komatsuna (Japanese mustard spinach), and the yellow of pumpkin looked splendid on the plate.

The point I want to make is that the soup was thick and contained ginger. Like I just wrote, we went to this restaurant in the middle of September, when the nights were getting to be a bit cold. So drinking this thick soup that contained ginger made me feel warm from the bottom of my heart.

The way the menu here is thought out means that it can only be thought out by someone who understands deeply how the seasons change in Japan. 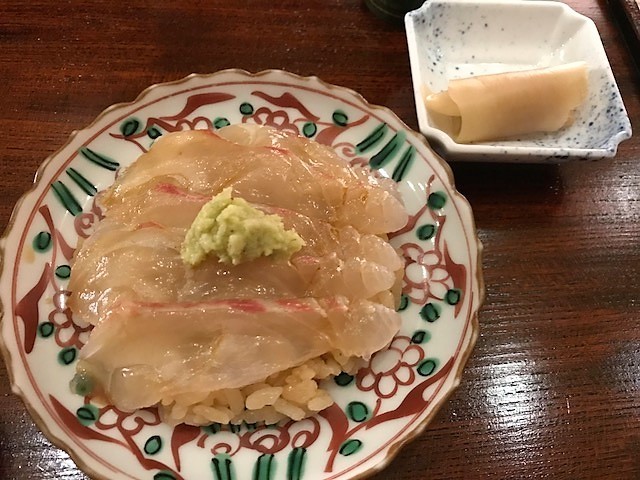 *The picture is of a smaller portion than normal.

Lastly, you get a rice dish, which you get to choose from many options. Some of them change in accordance with the season, but in this season they always have black sushi made with tai (Japanese sea bream).

What most pleased me about this dish is how it looks. The tai looks brilliant under the lights of the restaurant, and I was looking forward to eating it from the moment I put my eyes on it.

Next, the taste. The tai has been let to rest covered in seaweed, and it’s soft, and you can feel the sweetness present in tai, and I was surprised: can tai be this delicious! The way the black vinegar rice complements the taste is nice, and all in all, this sushi was way too delicious!

For example, my sake cup was cold from the moment it was given to me! And when it got warm, they gave me another one!

② They may not have anything Instaliscious on the menu, but each one of the dishes is made with great care

They didn’t use expensive plates, and there was nothing about the dishes that was that Instagrammable, but they were all carefully made and delicious!

The taste was gentle but still contained a lot of umami! I drank it all; to the last drop!

It can be accessed directly from Kyoto Station, so it’s very easy to get to! It’s not overly casual, but it doesn’t feel stiff or anything; it felt pleasant with a nice atmosphere. The value for money is great, and I was very pleased with the dishes.

There were many chefs working behind the counter, and the way they moved so fast was cool! This restaurant also has counter seats where you get to see how the chefs work their magic, so I recommend those too! They also explain the ingredients in English which was really great!