Eating soba noodles is an important New Year’s tradition in Japan, and luckily there are many great soba restaurants in Kyoto!

This year is almost over! What do people in Japan eat when it’s the New Years? You probably know the answer to this already: soba noodles! This tradition is said to have started in the Edo period (1603-1868) and soba noodles, because of their long shape, are said to represent long life. It’s also said that because of the chewiness of the noodles, you also get rid of bad luck by eating them. So for dinner on New Year’s Eve, soba noodles are something you cannot do without. But if you eat the noodles after midnight, it’s said to bring bad luck. There are many soba restaurants in Kyoto, but this time I’m going to introduce you to five really popular ones. If you are going to spend the New Year’s holidays in Kyoto, remember to also have some soba noodles on the New Year’s Eve! 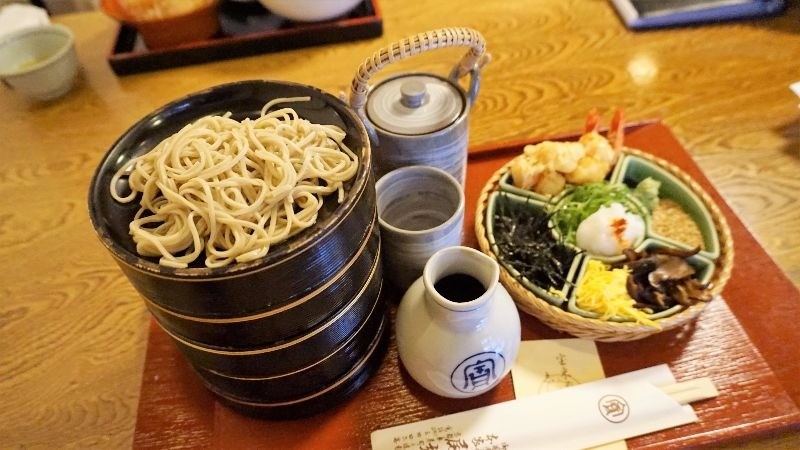 Honke Owariya is THE soba noodle place if you ask the locals. They are most famous for their Horai Soba which you can see in the picture. You have five layers of soba with all kinds of sauces and spices, every layer different from each other. 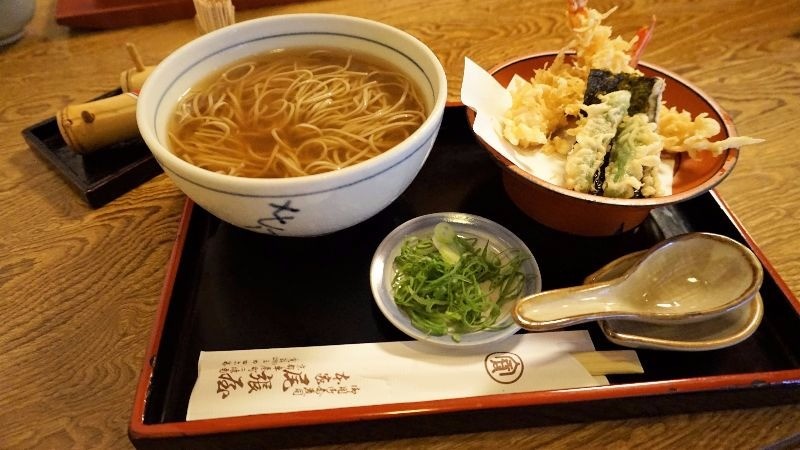 But if you want to eat something hot, then you could have their tempura set. The soba noodles are in a hot soup which will warm you on a cold winter’s day. The taste really is different – you can taste the traditions and all those years of history in the succulent tempura. 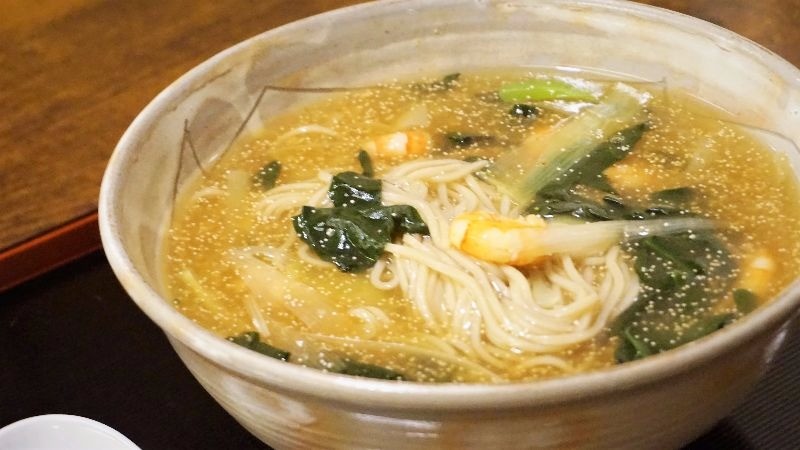 Honke Tagoto is located on the busy shopping street of Sanjo-Teramachi. The restaurant started operating in the first year of the Meiji period in 1868, and although the restaurant is very traditional, they’re not afraid to incorporate new styles and things into their menu. In the picture, you can see their Spicy Ebi-Taiko, which contains Pollock roe in its soup, and has a strong, spicy taste unlike the subtle soba usually served in Kyoto. This soba gets my recommendation. 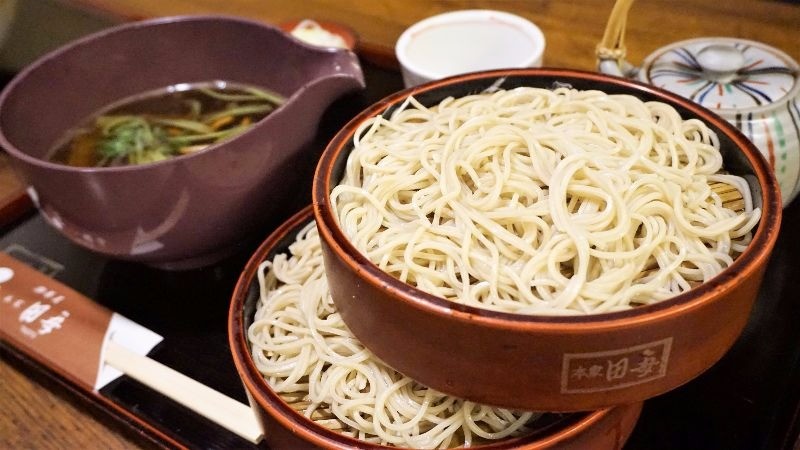 You can also get cold noodles here which you dip into a hot sauce, which in this case was a duck broth. The chewy noodles go together with the juicy duck to form a harmony in your mouth. So bite into the culture of Kyoto! 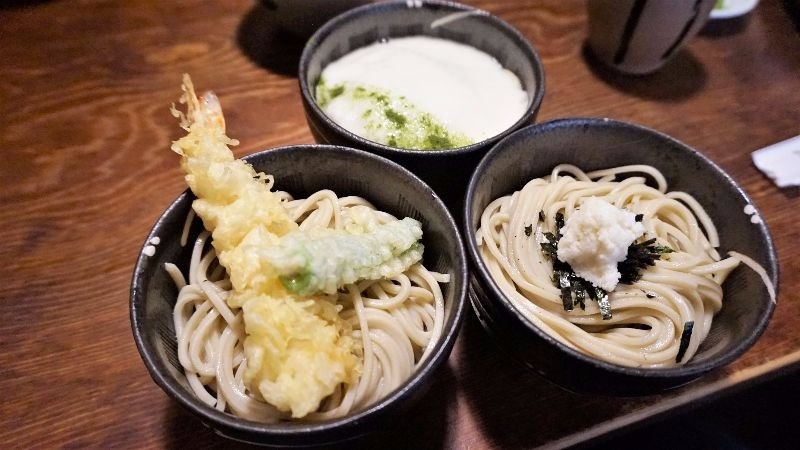 Misoka-an Karamichiya is located in a traditional Japanese house and the restaurant itself has over 300 years of history behind it. Once inside the restaurant, you’re greeted by a nostalgic feel. Eating cold noodles in winter you may feel a bit cold, but you’ll get to taste the great taste of buckwheat in the noodles. The noodles taste even better eaten with the Japanese mountain yam paste! 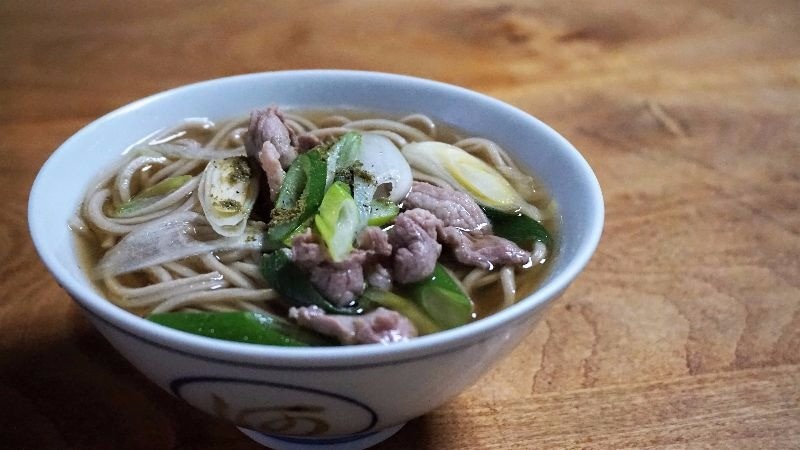 The noodles in these duck soup noodles suck up the flavors from the duck, making every bite a joy, especially in winter. If you like spicy food, remember to add some shichimi chili mix onto the noodles. 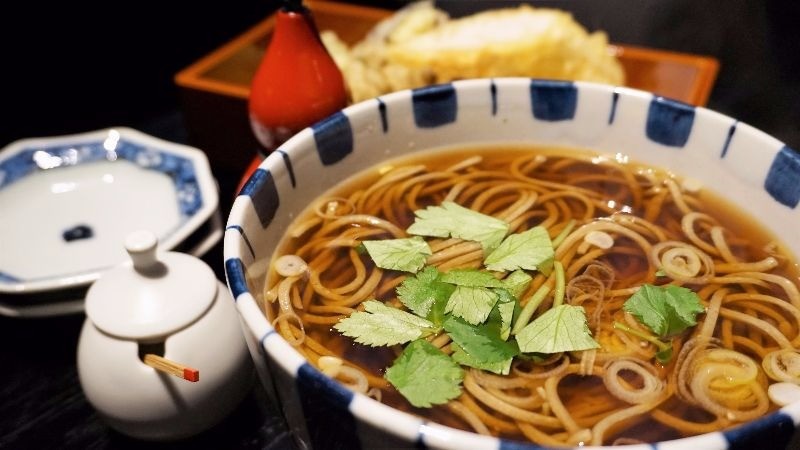 Kyoto Nakanokoan is a trendy soba restaurant in the middle of Kyoto, and it’s indeed so trendy that you wouldn’t at first believe it’s a soba restaurant. Inside the restaurant the lighting is dim and the atmosphere bar-like. Unlike many another soba restaurant, Nakanokoan’s tempura set doesn’t contain seafood tempura, but instead, it features chicken tempura. 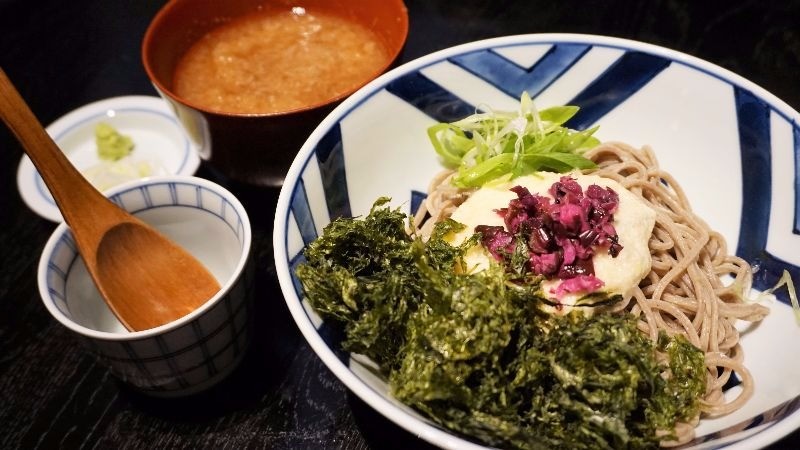 You could get this dish, some very light soba noodles with some grated hot daikon dashi as a dip. If you add some wasabi you can make the dish even tastier. This restaurant also has a very nice sake menu, so you can also have a drink with your soba. 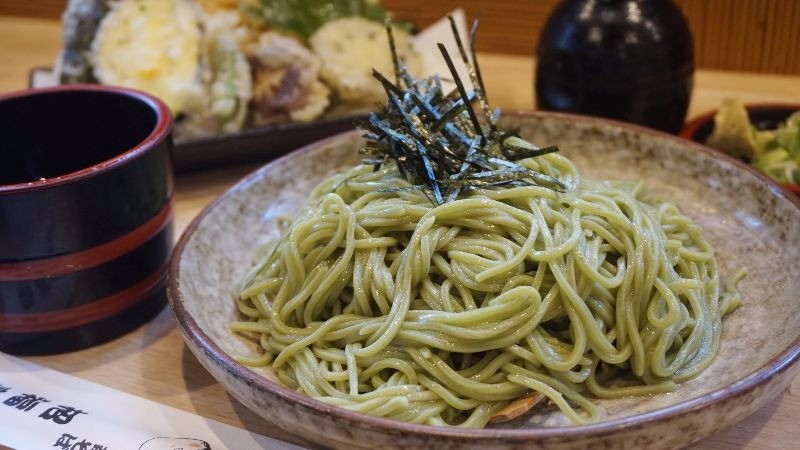 This restaurant is located close to subway Gojo Station, and their specialty is soba noodles with matcha in them. The taste is very special because they add matcha to the noodles when they’re making them. This is why the noodles are a light shade of green. The noodles here are best had with some tempura as a side. 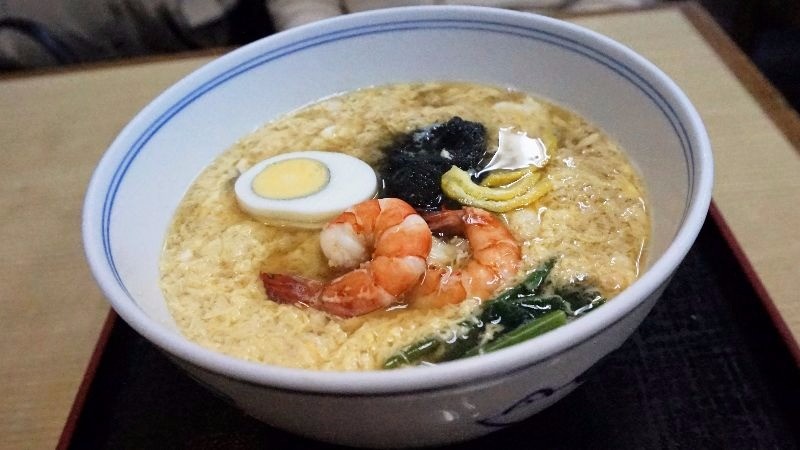 This is their most famous dish, Fuku Soba-men, which is full of nutrition, as you have the noodles in an egg soup with shrimp and vegetables, and even half an egg (an egg in an egg soup!) in there. The tasty matcha soba noodles are great on a cold winter’s day, so remember the name of Shofukutei when you’re in Kyoto.

Read More
New Year’s in Japan equals soba noodles. And in Kyoto you can have your soba noodles in a restaurant with hundreds of years of experience in soba making, so the taste is truly authentic. No matter whether you like your noodles cold or hot, you’ll find something you like in Kyoto. I personally like cold noodles better, especially with some wasabi and nori, these make the noodles even tastier. If you come to Kyoto, remember to have some soba noodles!
Related keywords
Traditional Japanese Food Soba Noodles All Kyoto Area
New Articles
Reservations at high in demand restaurants that Sharing Kyoto can make for you.
Central Kyoto Area
5 of the Most Picturesque & Relaxing Cafes in Kyoto
All Kyoto Area
Hot summer is the time to eat Kyoto curry
All Kyoto Area
View All New Articles
Feature Articles
Kyoto Oden Guide – From Classics to the Unconventional
Kyoto's World Heritage Level Autumn Leaves – What’s Your Plans? Kyoto Autumn Feature
Share
×
Share
Share
Tweet