Beloved by locals, the Fushimi area is home to the world-famous Fushimi Inari Taisha Shrine. The reason for its popularity is its ease of access from Kyoto station and the Gion District and its quiet atmosphere. However, the Fushimi area is more than just the famous shrine; it’s also a great place to enjoy the non-touristy side of Kyoto and shop, eat and walk with the locals. In this article, we’ll introduce you to an unusual shrine and a shopping street little known to the majority of tourists!

This will be the starting off point for our course! 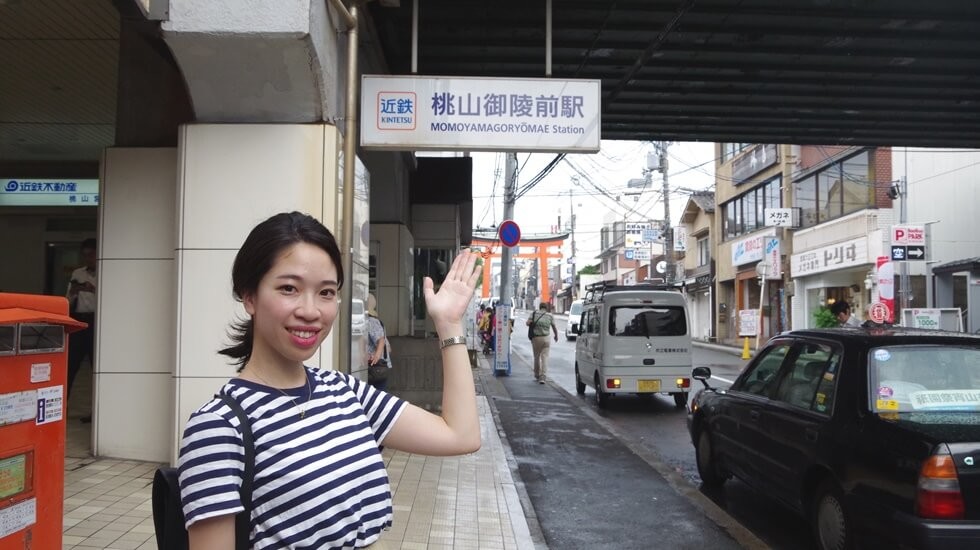 Below are directions of how to get here from a few major spots.

・Fushimi Inari Shrine: Take the Nara bound JR Line train from “Inari Station” and get off at “Momoyama Station.”

・Nara Station: Take the Kyoto bound train on the Kintetsu.

This station is in one of the most historically rich and Kyoto-esque parts of the Fushimi area. The area is home to sake breweries such as Kizakura Kappa Country, Edo Period Jikkokubune river cruises and the famous location of Sakamoto Ryoma’s death, Teradaya.

This will be our route for the day. 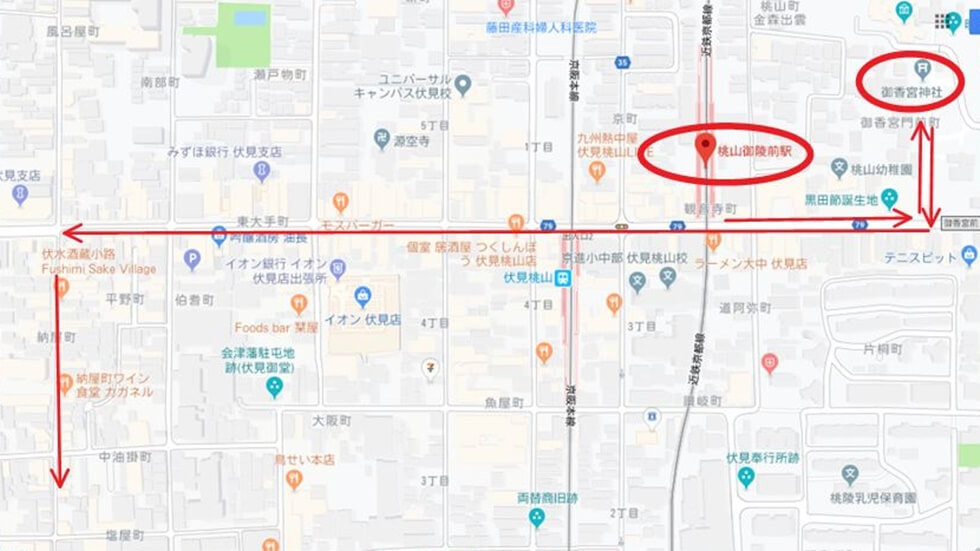 First, after leaving the station, head left and head towards the shrine. 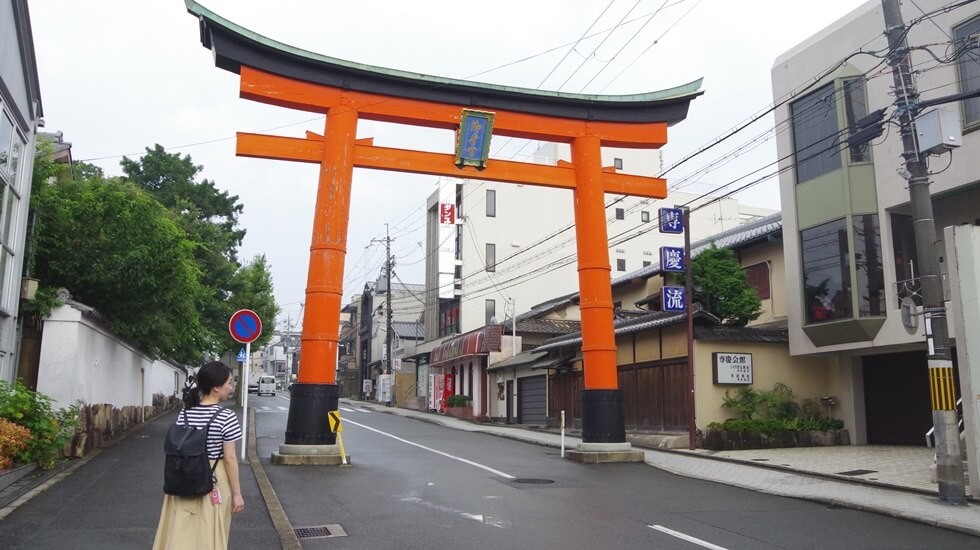 After walking for a couple of minutes, you’ll see a giant torii gate.

Once you’ve passed through the gate, there’ll only be another one or two minutes left to walk. 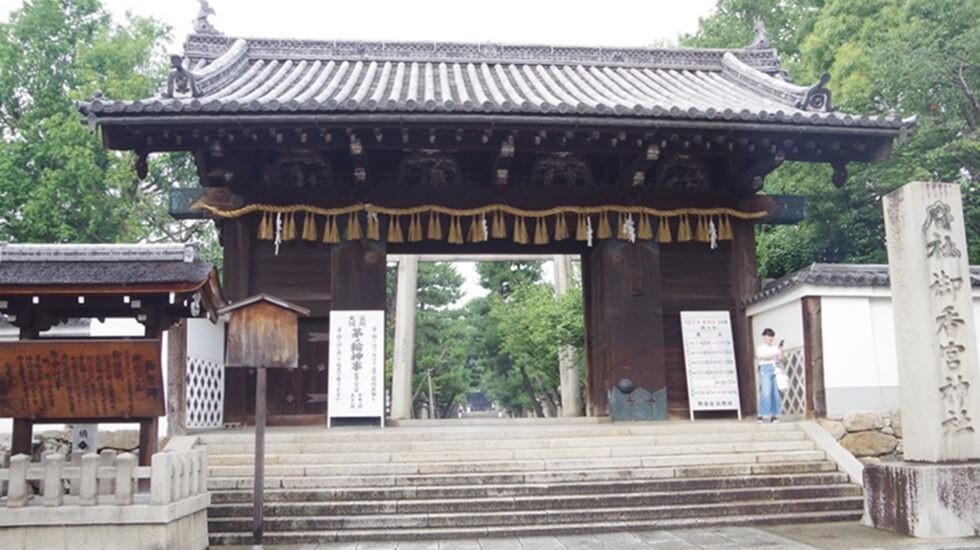 Here it is, the Gokounomiya Shrine. Known for its natural springs and Sago palm trees, this shrine hosts the nine-day long Gokounomiya Shinkosai Festival every October. The festival sees rows of classic Japanese festival stalls and is really fun, so definitely check it out if you can! 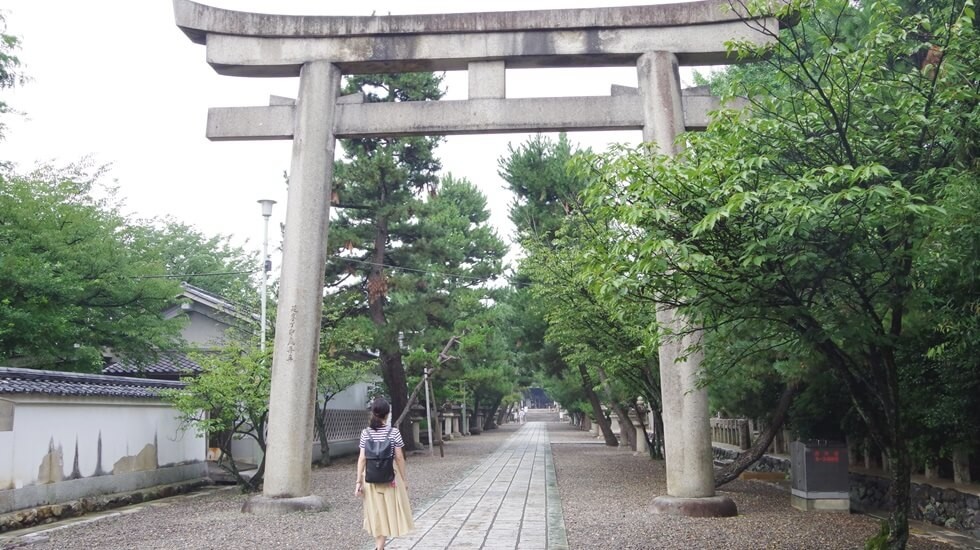 Kyoto summers might be muggy and hot, but most likely thanks to the stone path and surrounding rows of trees, the shrine grounds here are refreshingly cool.

Although the shrine is located in such a busy area, it remains serenely quiet. 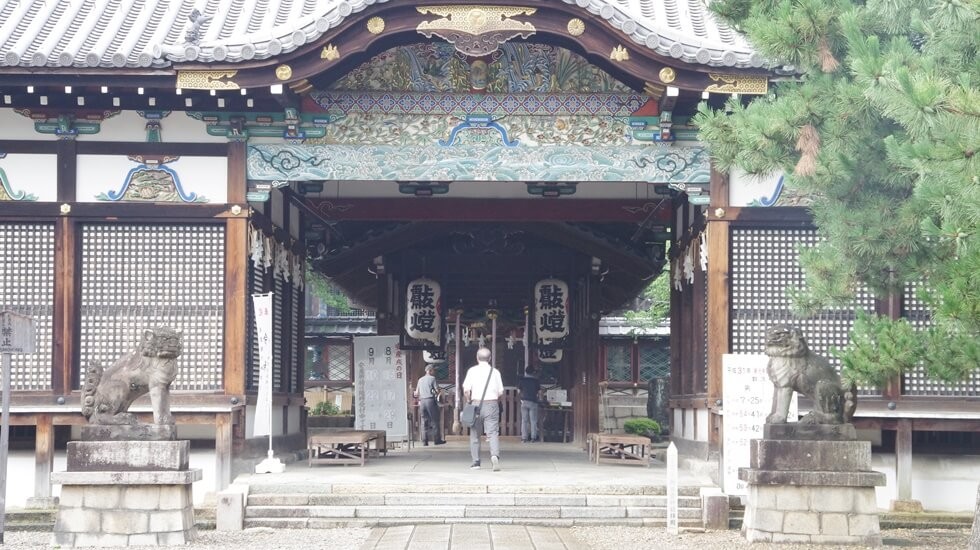 Eventually, you’ll come across the haiden hall of worship, which has been built in front of the honden main hall for worshippers. Only high-level shrine priests may enter the honden, so we made our offering here at the haiden. 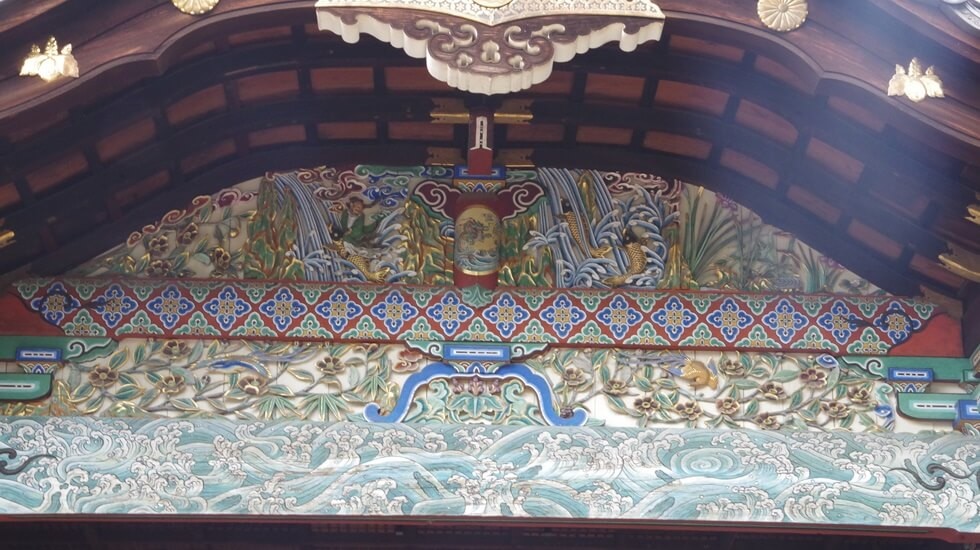 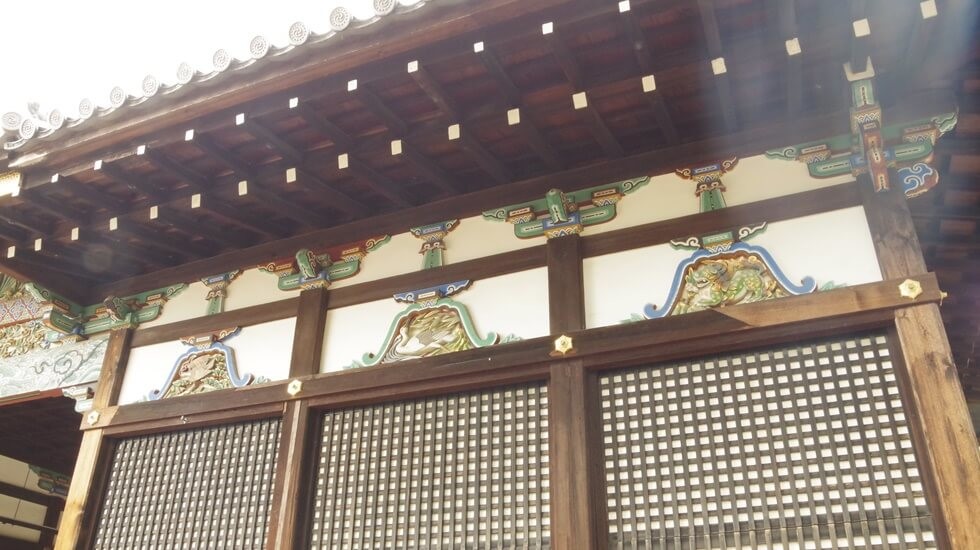 Although it may not be the main hall of the gods, the haiden still features an absolutely beautiful design. The detailed three-dimensional carvings and rare use of blue and green was particularly striking. Shinto shrines are largely thought of as being white and crimson-red; however, the use of colors which depict waves and grass here workes to convey the feelings of those who were here and cherished the natural beautiful of this land before us in its own special and unique way.

Just as we were about to make our offering, we spotted something… 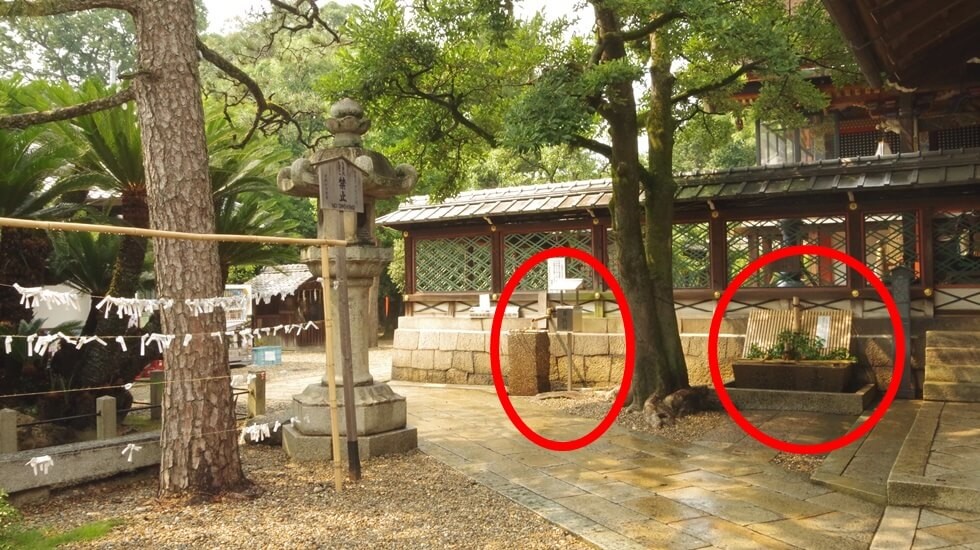 There were two different chozuya, places to wash and cleanse your hands. But why two? As we moved closer, we saw that the one of the left was actually for water to take home. 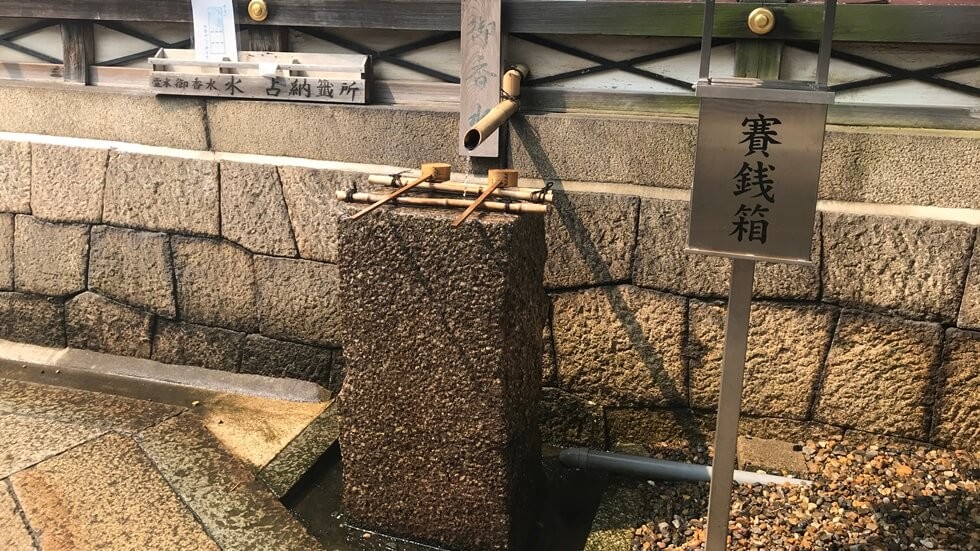 It seems that this water is known for curing illnesses. The water is easy to drink soft water, which is perfect for having during a water break on a hot day.

Needless to say, I filled up my water bottle and took some home. 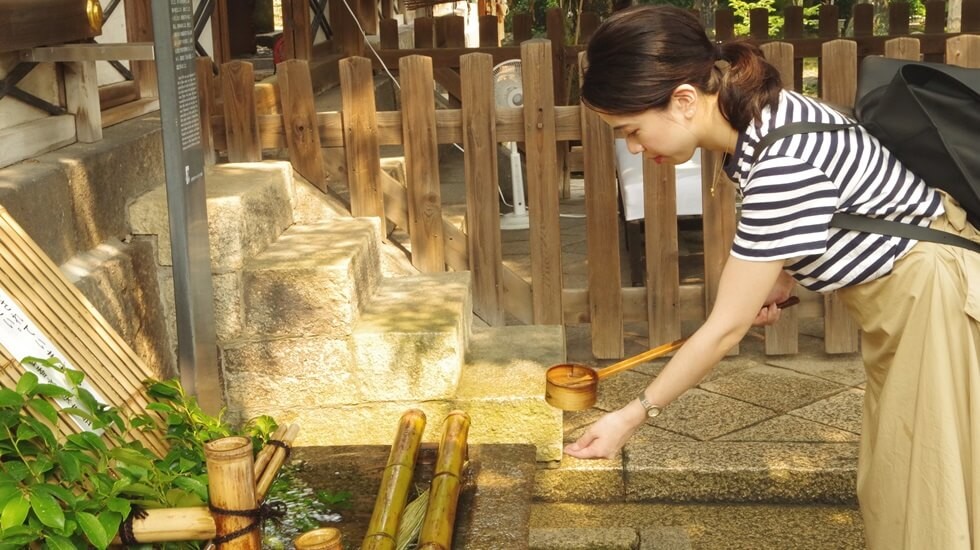 At the right chozuya we cleansed our hands and mouths and moved on to greeting the gods. 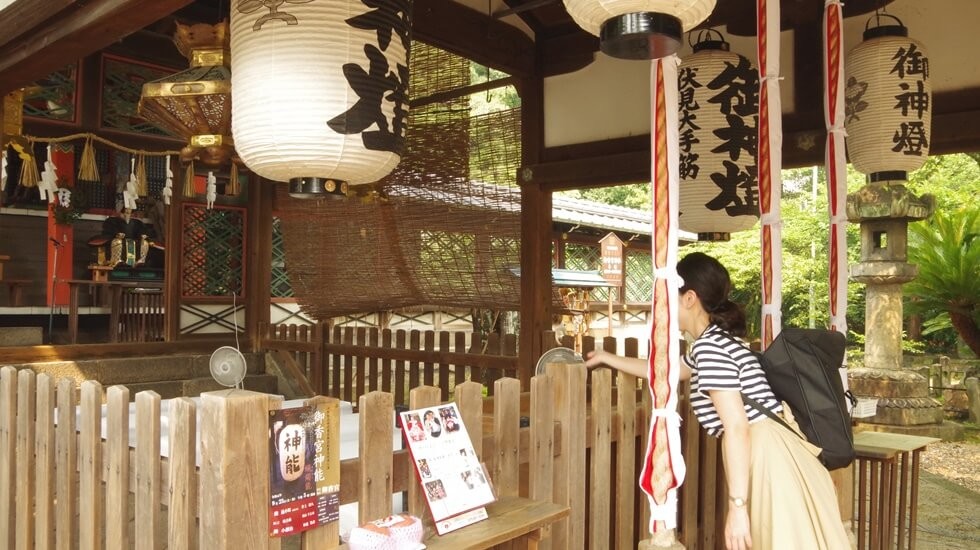 First, we threw in our coin offering. 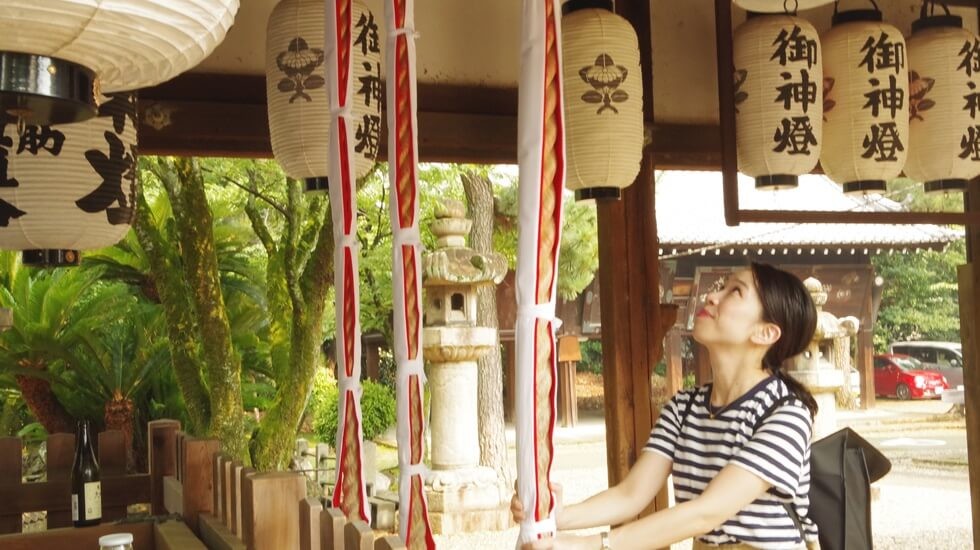 Then rang the bell two/three times. 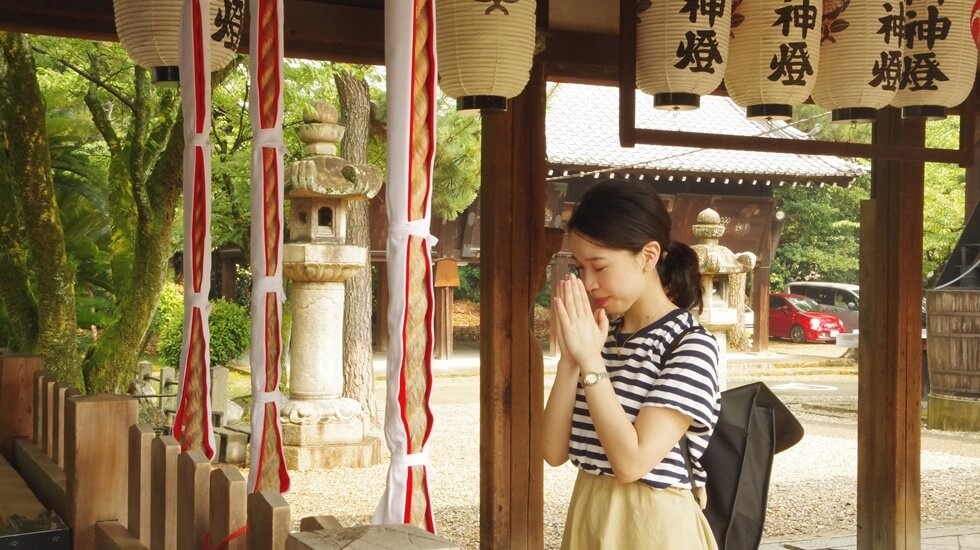 Next, we bowed twice, clapped twice, and said our prayer.

“Miyabi from Sharing Kyoto here. I pray that I’ll bear many a great article!”

The Gokounomiya Shrine is dedicated to the god of safe childbirth, so that’s why I used the word “bear” in my prayer.

Finally, we made sure to check out the famous Sago palm trees! 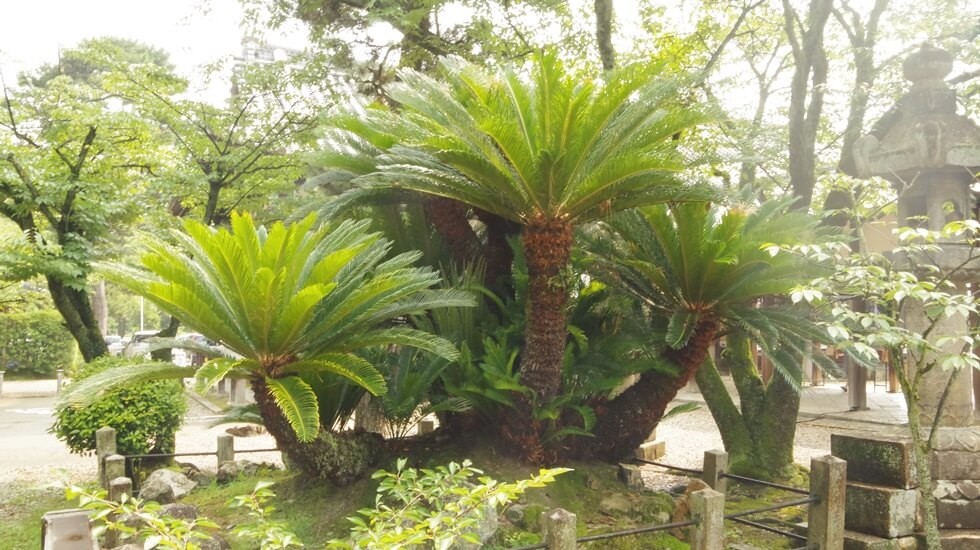 Standing for over 400 years, this tree was impressively big. I’m sure this tree has seen a fair few things happen in Kyoto over its many years. I didn’t really know much about Sago palms, so at first thought, “I swear I’ve seen a Pokémon like this before.”

We eventually got sick of being roasted in the sun and decided to escape to some shade.

We made our way back to the Momoyamagoryomae Station and continued through until we hit the Otesuji Shopping Street! 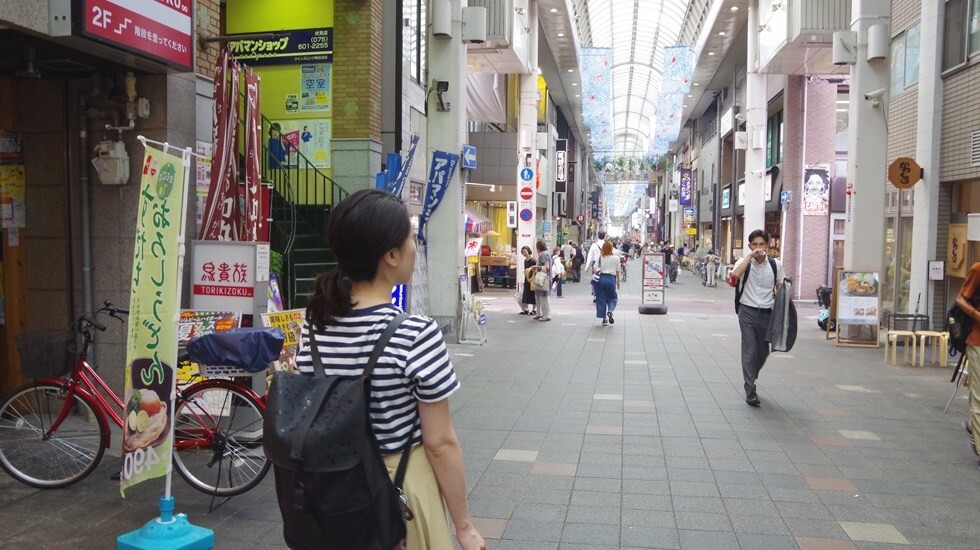 Because this place is a shopping arcade, it’s great for both sunny and rainy days.

With the vast majority of people around being locals, this place seems to still be a well-kept secret. 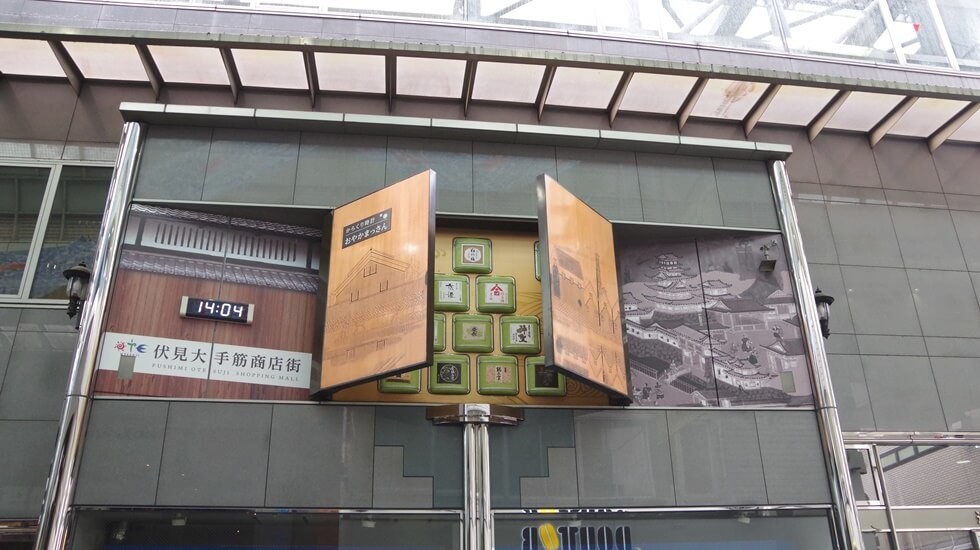 To the right of you when you enter the arcade, you’ll find a massive clock on the wall. If you happen by it on the hour, you’ll get to see it move! 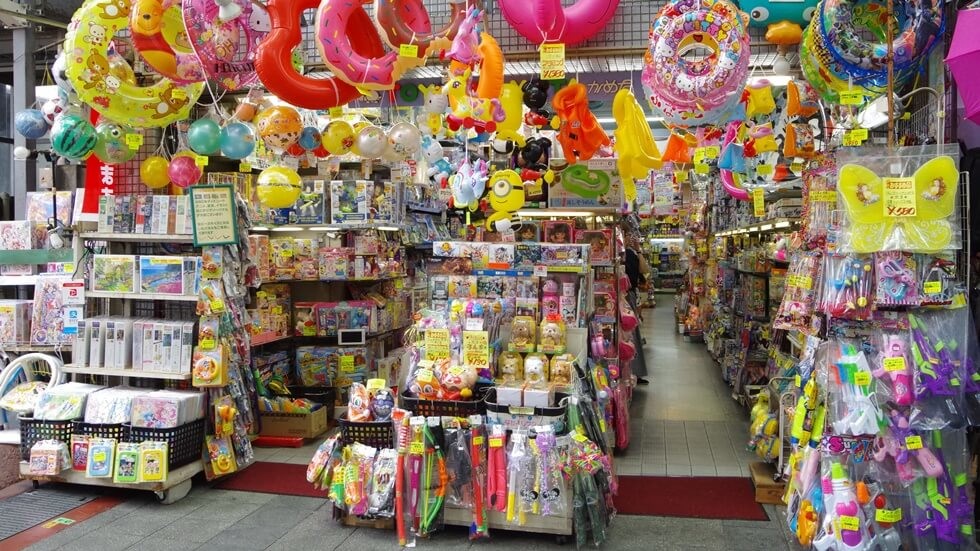 Across from there, you’ll see an old fashioned Japanese toy shop.

This place sells everything from fireworks and water guns, to dolls and other fun things for kids. 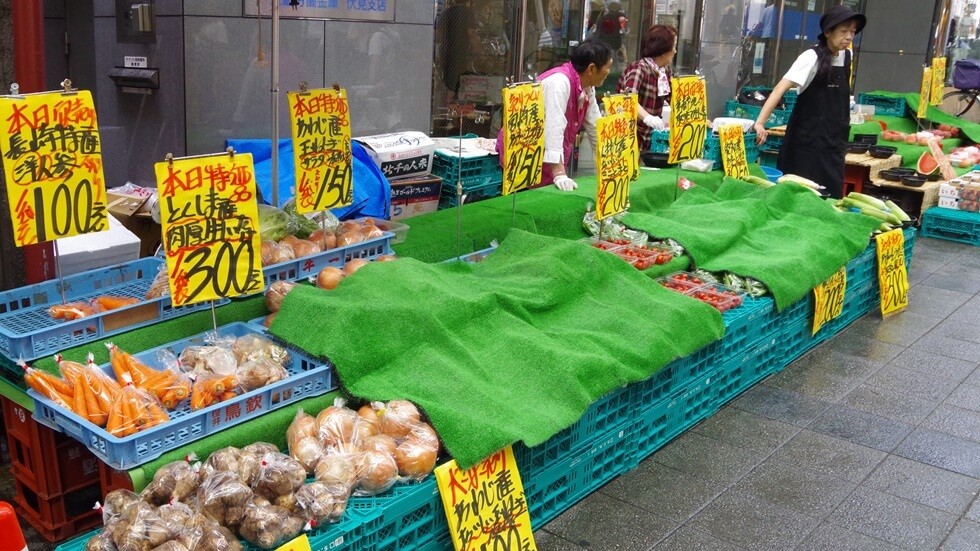 The carrots were only 100 yen for four or five! How cheap!

Some things here are sold at half the price of what the supermarkets sell them at, so it’s an excellent place for those looking for a bargain. 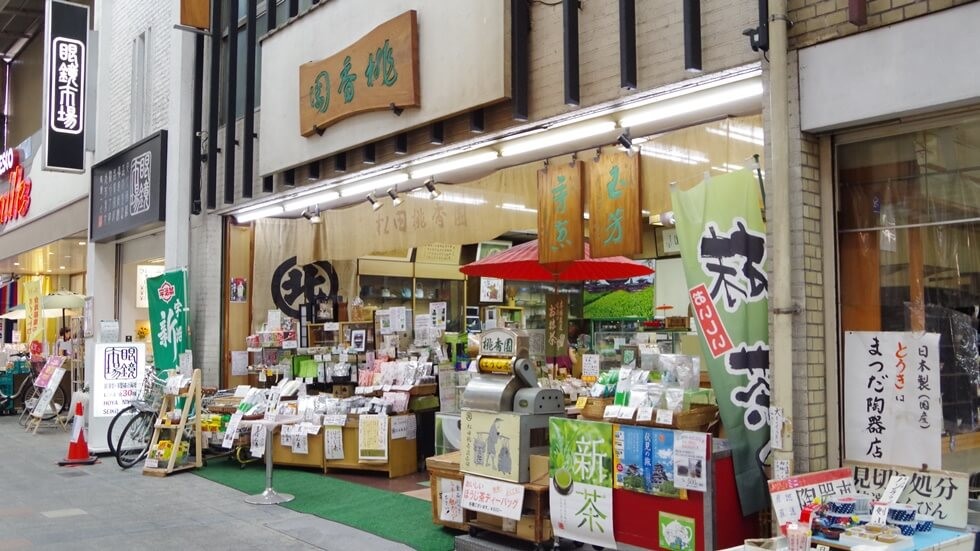 Further down the road, there’s also a tea shop.

This enormous store is all for tea, so you can just guess how many different varieties they’re sure to have. 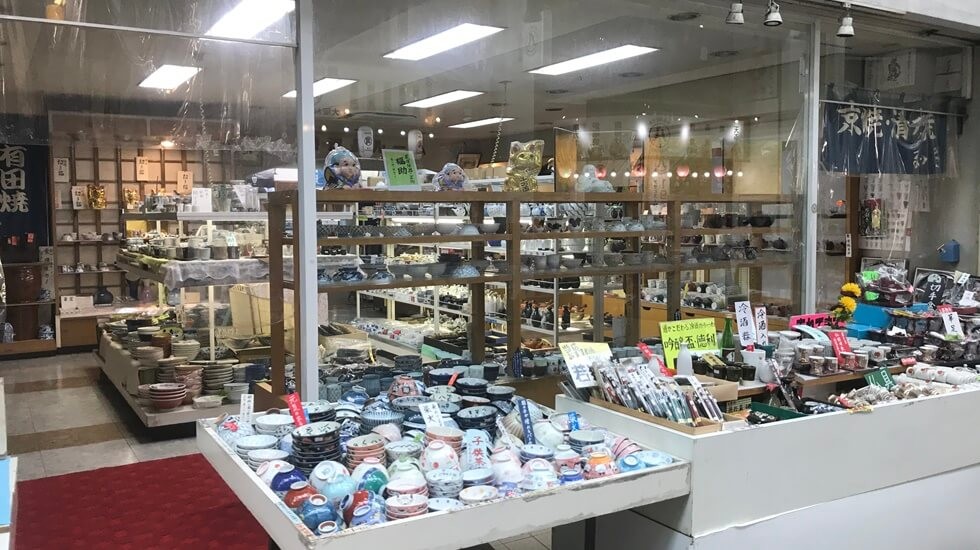 This place was a ceramics shop. While they sold all kinds of dishes, they mainly stocked plates and bowls. As you would expect from a ceramics shop in Fushimi, they also sold cups for sake as well. 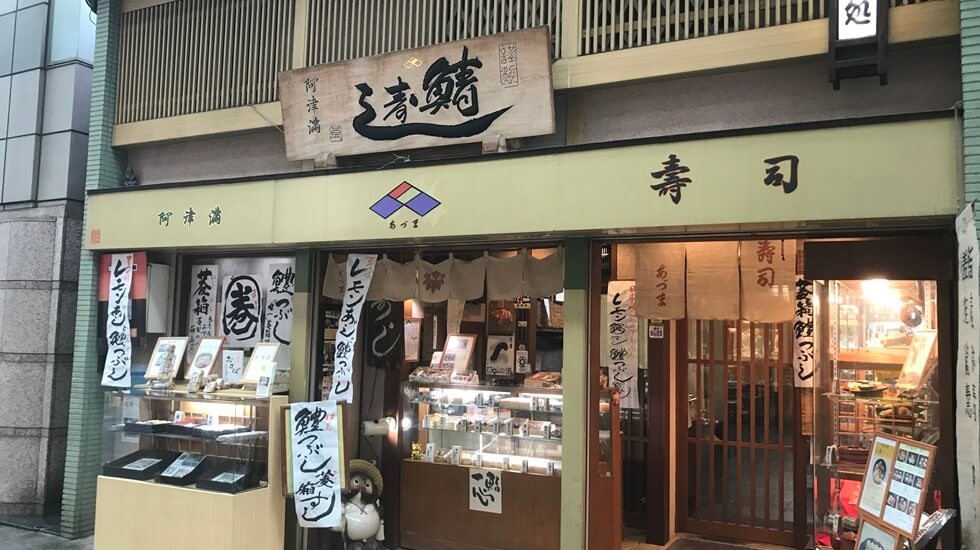 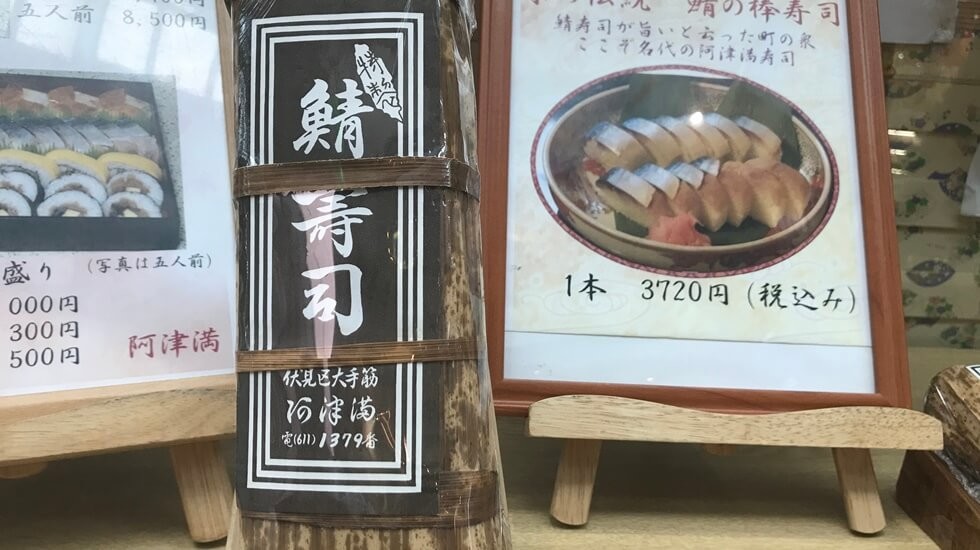 Just past there was a sushi shop. As you can see pictured above, they sold Kyoto’s most well known and my personal favorite sushi, mackerel sushi. The vinegar and kelp marinated mackerel together with the rice which has been squeezed into shape is absolutely divine.

If you have the chance, definitely give it a try. 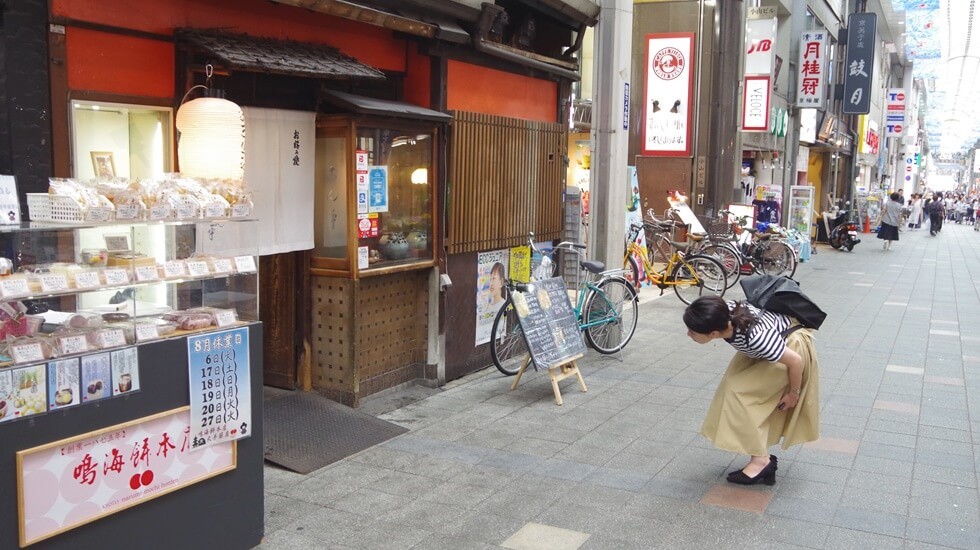 We also found a delicious looking Okonomiyaki restaurant. Being able to walk down the street and find all these cool places makes these old school shopping arcades really interesting. Although there aren’t many places selling finger food like Nishiki Market, you can still have a ton of fun picking up a few things as you wander around.

After walking so much, it was time for us to sit down and enjoy something tasty.

After walking to the end of the arcade and turning left, we began to head toward the famous street of Ryoma-dori. 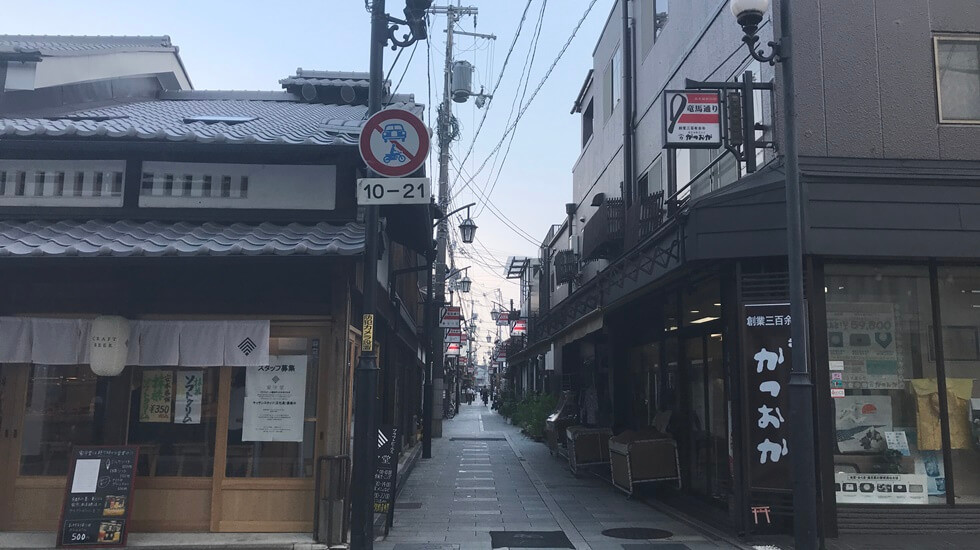 Compared to the arcade we were just in, Ryoma-dori felt quiet and serene. As we walked, we began to smell something cooking, but what could it be?! 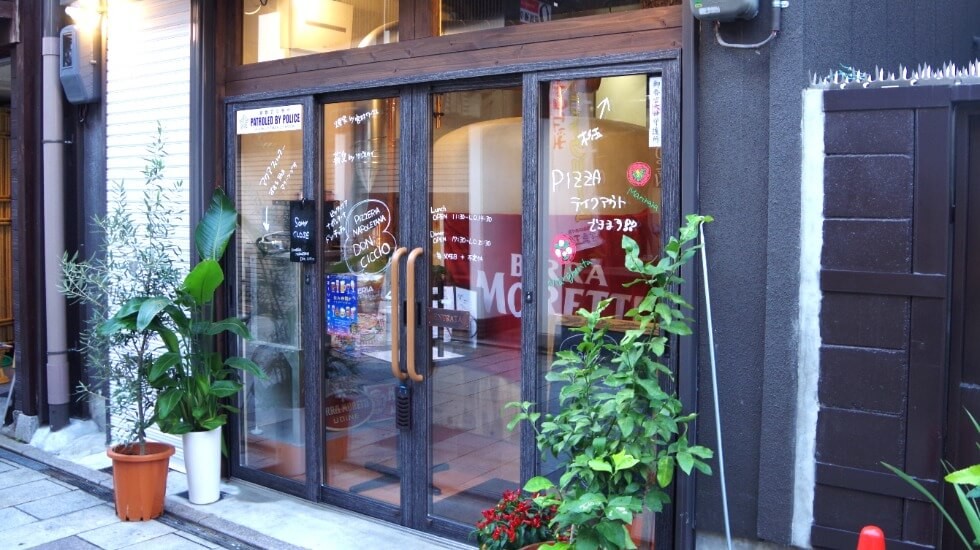 It looks like it was coming from here! The Neapolitan Pizzeria, DON CICCIO! We heard that they only just opened in March of 2019, so decided to head inside and check them out.

Inside we discovered this store's famous Neginara pizza! As it's head chef and pizzaiolo, Togo's own original pizza, we were absolutely buzzing with excitement. 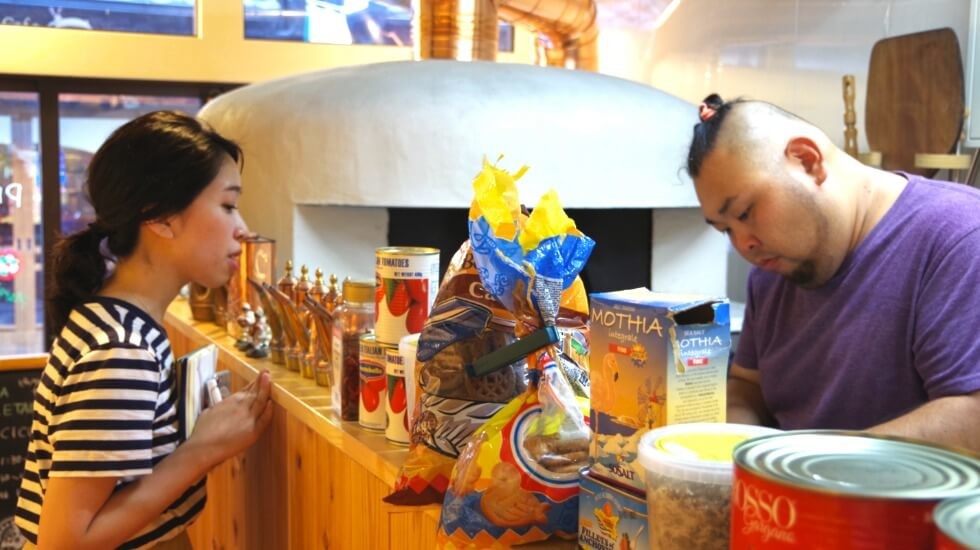 Togo kindly let us know that it’d be done right away and let us watch as he worked his magic. 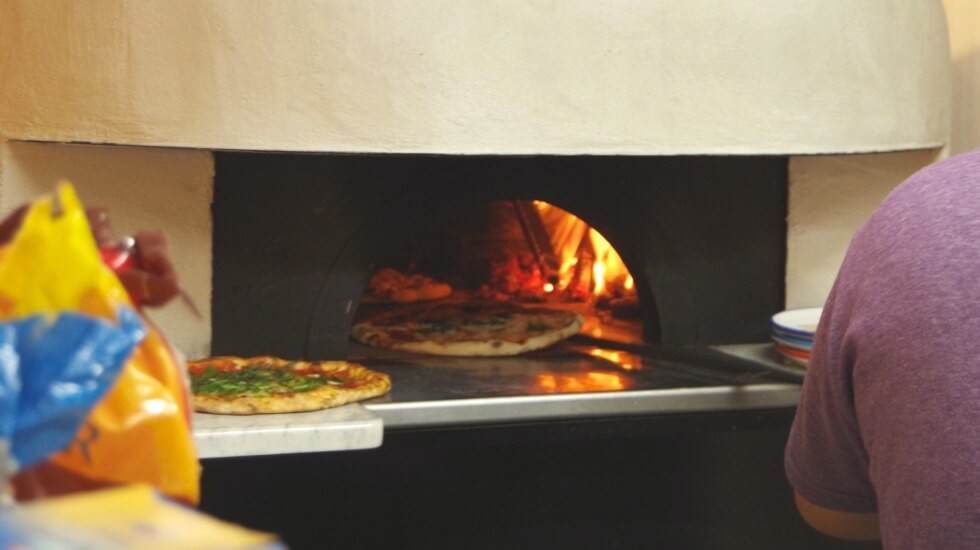 After only one or two minutes in the oven, our pizza was done! We were so hungry, so being able to dig in right away made our day!

What everyone was waiting for; the final product! 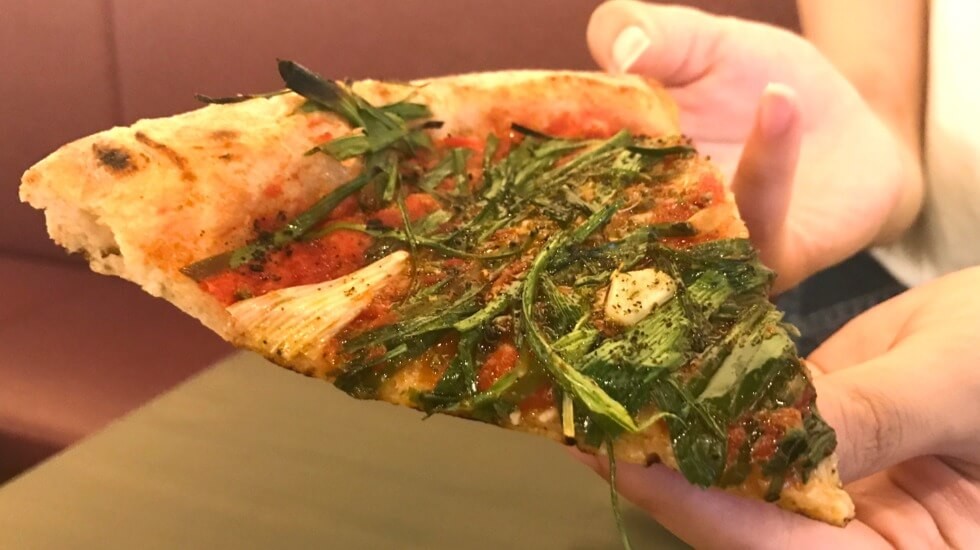 “Ah, it’s so good! The Kujo leeks, the tomato, the garlic, the shichimi spices, it all goes so well together!” The Neginara pizza is a strangely delicious mix of Italian and Japanese flavors. Although we were starving, we weren’t able to finish it all and asked the staff to kindly wrap it up for us to take home.

The Neginara doesn’t have any cheese on it, so still tastes great cooled down as wel.

I’m not an expert of architecture, but the design and atmosphere of the Gokounomiya Shrine was fascinating. The Gokousui water was remarkably cold and tasted wonderful, and I kind of understand why the sake made in the area is so good now. The Otesuji Shopping Street is full of so many unique and novel stores that we weren’t able to showcase them all in this one article. So if you have the opportunity, definitely check it out for yourself and get a glimpse into the lives of the locals as you shop for souvenirs and enjoy something to eat.
Related keywords
Temples & Shrines Italian fushimi inari Fushimi Inari
New Articles
Enjoy Kyoto with only 10,000 yen a day!
Gion & Kiyomizu Temple
Five restaurants to enjoy New Year’s soba noodles in Kyoto
All Kyoto Area
Hot summer is the time to eat Kyoto curry
All Kyoto Area
View All New Articles
Feature Articles
Kyoto Oden Guide – From Classics to the Unconventional
Kyoto's World Heritage Level Autumn Leaves – What’s Your Plans? Kyoto Autumn Feature
Share
×
Share
Share
Tweet