In this article, the once day drinking crazed Miyabi introduces us to her favorite bars and cafes in Kyoto where you can grab an early drink.

What are your favorite things to do while traveling?

Well, my favorite is day drinking!

However, sadly, it’s pretty difficult to find bars in Japan that are open from lunchtime. That’s why I’ve put together this article with an easy to follow area breakdown for those who simply can’t wait until evening for a drink!

In the article, you’ll find places offering everything the trendiest of alcohol, craft beer, and the oh so popular Japanese whiskey to classic Kyoto sake. 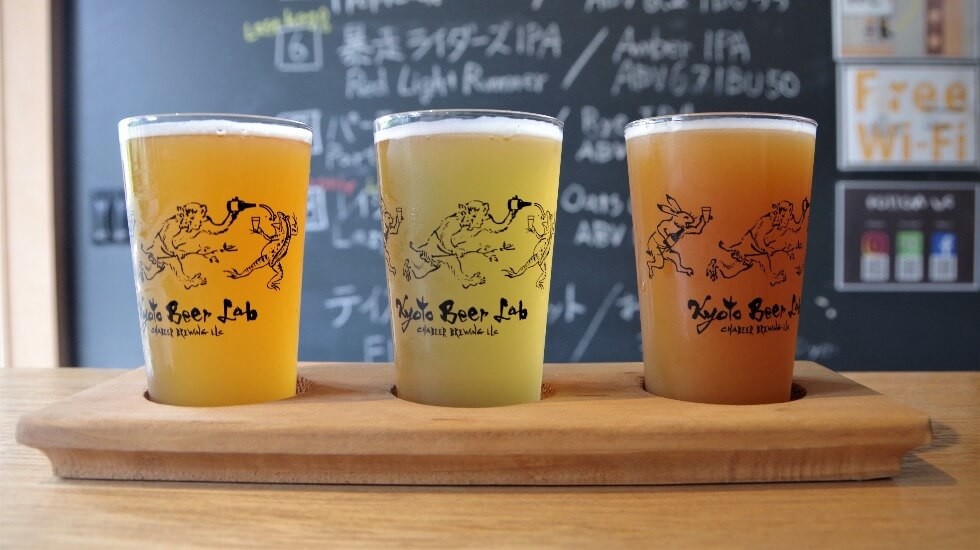 Open from 3 p.m. on weekdays and 1 p.m. on weekends and holidays, the Kyoto Beer Lab is a local Kyoto microbrewery.

Kyoto Beer Lab also serves vegan and vegetarian food, so it offers a little something for everyone.

5-minutes from the Keihan Shichijo Station 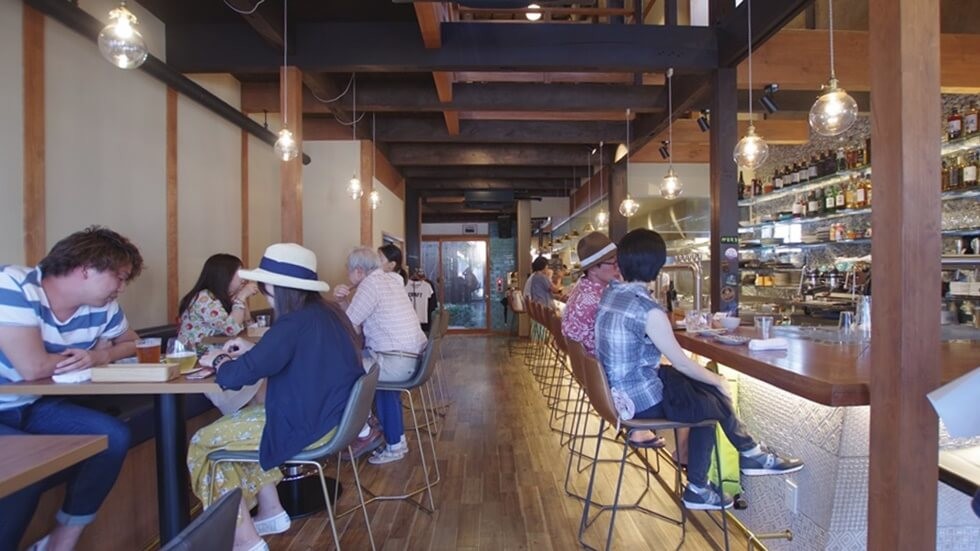 Crafthouse Kyoto is a café/beer bar that opens from 11 a.m.

This house of craft beer boasts a line up of 12 different Japanese beers carefully selected from around the country.

With its old school Kyoto townhouse architecture, massive windows and dope beats, there’s no cooler place in town to cheers to a well-deserved mid-morning pint than  Crafthouse Kyoto.

2-minutes from the Keihan Shichijo Station 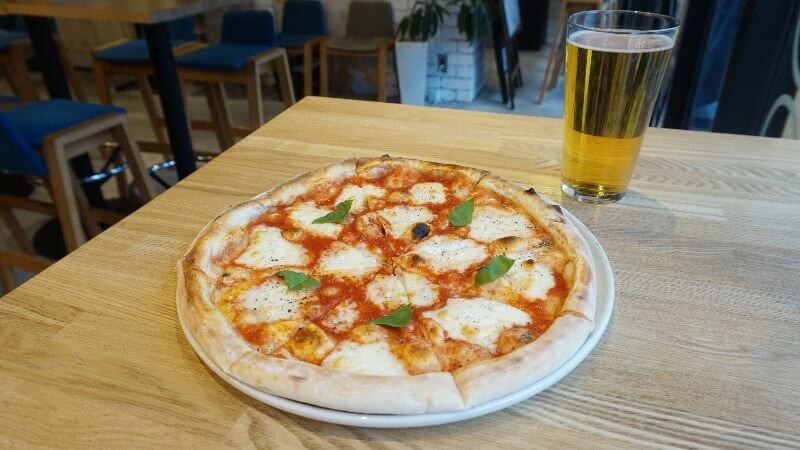 Open from 10 a.m., Craft Beer & Pizza 100K is exactly what it sounds like, a craft beer bar and pizza restaurant.

Offering stone oven cooked pizzas and a huge line up of beers, you’ll have no problem finding something that suits your taste buds.

The area is marked by its outstanding and notably western-inspired “modern architecture” built in the first two decades of the 20th century. The area is also known for being home to a number of incredible cocktail bars.

4Man in the Moon Rokkaku 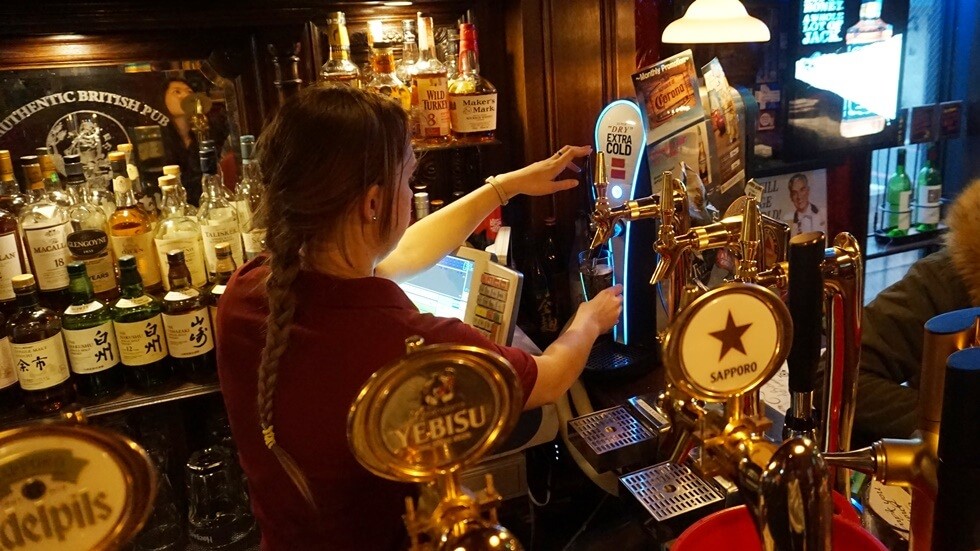 Open from 3 p.m. on weekdays and 12 p.m. on weekends and holidays, Man in the Moon Rokkaku is a classic British pub.

Man in the Moon Rokkaku also has a TV that plays sports so during the season you’ll be sure to always find it packed with fans of whoever’s playing.

8-minutes from the Shijo Subway Station 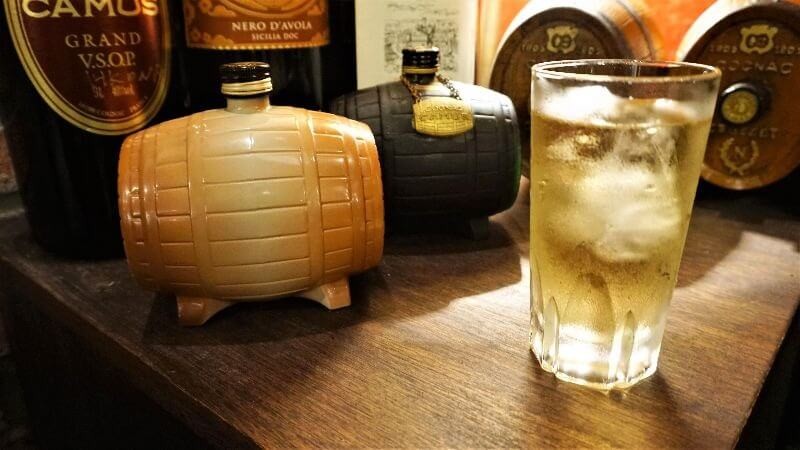 With over 1,000 types of alcohol, this “liquor museum” is our recommendation for those wanting to try a range of different whiskies at a reasonable price.

While Liquor Museum Karasuma Sanjo Honten opens at 12 p.m., they have a happy hour from 2 to 8 p.m. that’s half off all the drinks on their “grand menu.” However, just note that there is a ¥500 entrance fee.

This bar offers both standing and seating options.

10-minutes from the Shijo Subway Station 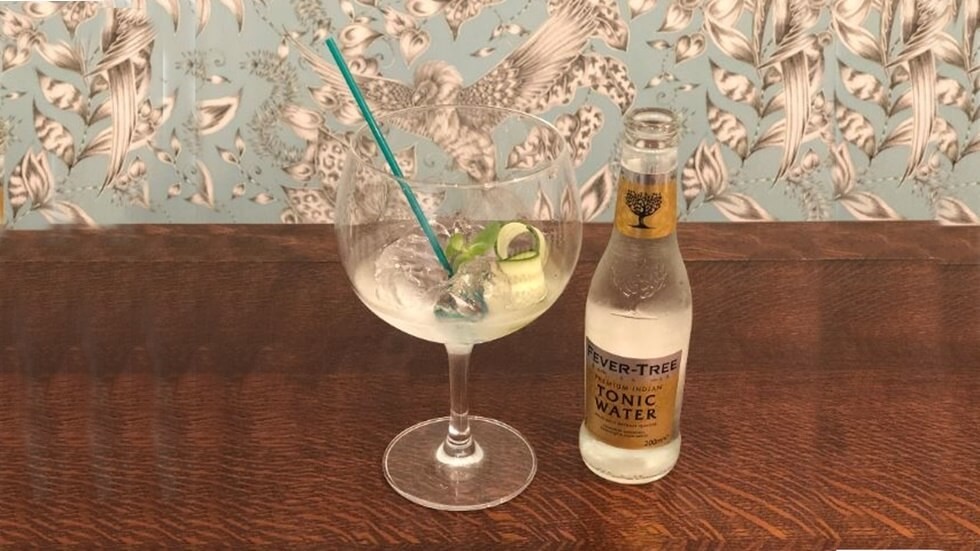 Open from 11:30 a.m., THE THREE BEARS is an authentic British café that also sells alcohol.

While it wouldn’t be very British without Guinness, THE THREE BEARS also has a few cocktails, including gin and tonic and a marmalade vodka cocktail.

For the gin and tonic, you can choose your favorite of three different gins;  The Botanist, Sipsmith and Hendrick’s.

At THE THREE BEARS, the air’s always filled with the delicious smell of freshly baked scones, so unlike most of the other places in this article, it’s a great place to go if you want a bite of something sweet.

Kawaramachi is a bustling bar area in downtown Kyoto mainly popular with a younger crowd.

Sitting one street over from the traditional watering holes of Pontocho is Kyoto’s largest bar and club district, Kiyamachi–which is also home to some of the most reasonably priced bars as well. 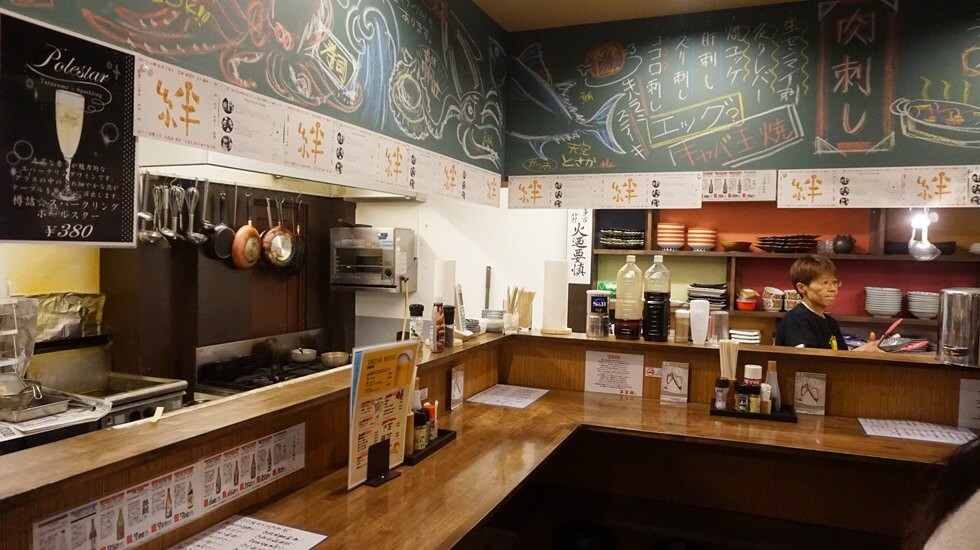 Tachinomi Kokoro is a casual, local standing bar that opens at 3 p.m.

One of the most outstanding things about this bar is that you can find classic izakaya dishes at a much more reasonable price.

If you want to try a bunch of different dishes at a reasonable price, then drop by Tachinomi Kokoro.

4-minutes from the Hankyu Kyoto-kawaramachi Station. 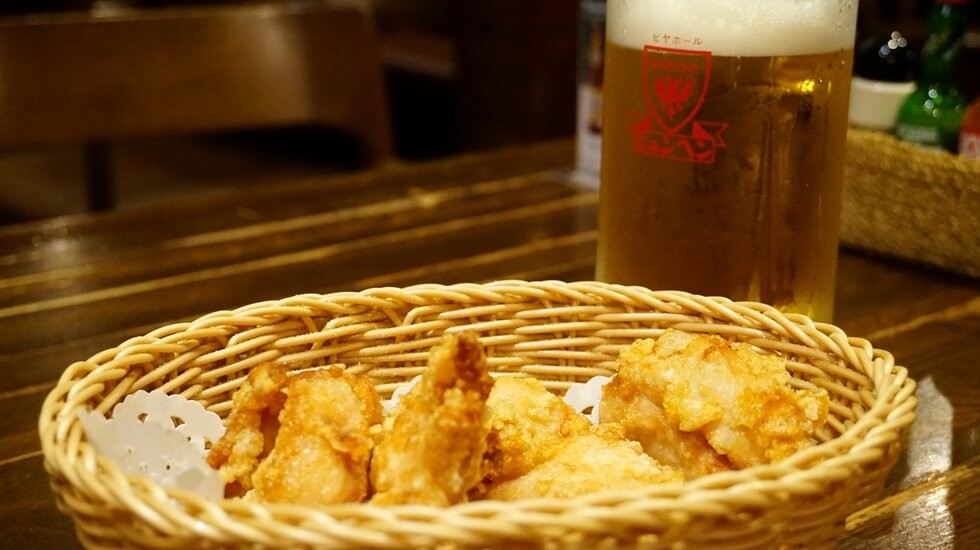 Make sure to check out the unbelievable combo of giant pieces of juicy karaage fried chicken and beer.

Munchen has over 200 seats, so you’ll have no problem getting in with a large group.

1-minute from the Hankyu Kyoto-kawaramachi Station.

5-minutes from the Keihan Gion-Shijo Station.

Sitting just two stops over from the Fushimi Inari Taisha Shrine is the Fushimi Chushojima area. Known for being one of Japan’s holy lands of sake and also packed with shops, Chushojima remains relatively unknown to tourists, so if you want to avoid crowds, or just feel a little special, then we can’t recommend it enough. 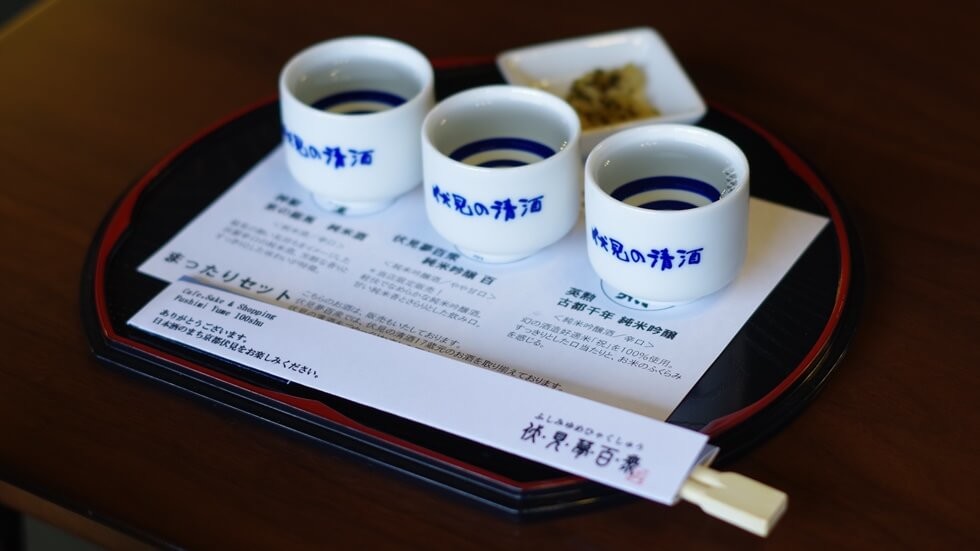 Fushimi Yume Hyakushu Café is a café that offers a range of sake-based drinks and dishes that opens at 10:30 a.m.

Some of their unique dishes include a wide variety of desserts, including sake affogato and sake Baumkuchen.

Our recommendation, however, is the sake tasting menu, which comes in both dry or sweet.

7-minutes from the Keihan Chushojima Station

6-minutes from the Keihan Fushimi-Momoyama Station. 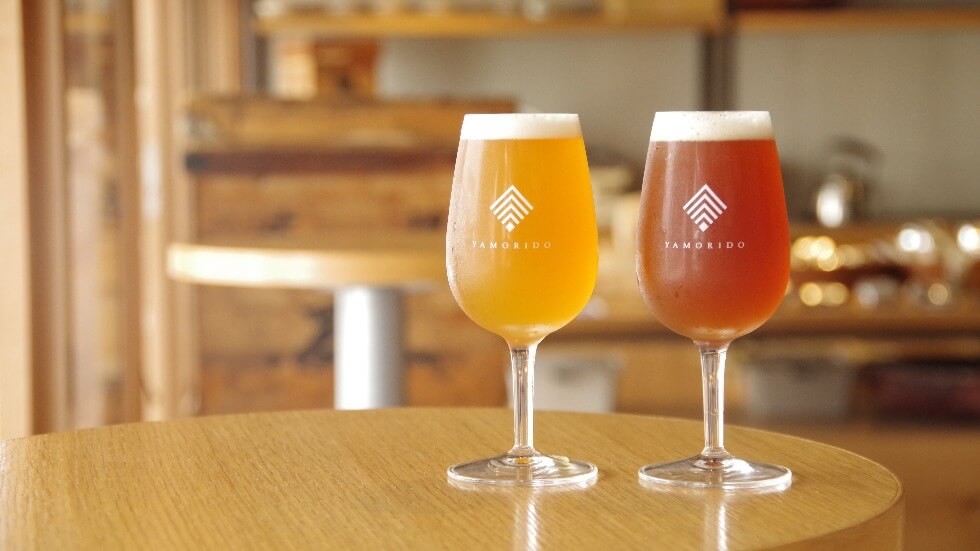 Yamorido is a Kyoto microbrewery that opened in June 2019.

Sipping a beer while basking in the warm morning light inside an old Kyoto townhouse is surely something you’ll only ever experience at Yamorido.

6-minutes from the Keihan Chushojima Station

5-minutes from the Fushimi Momoyama Station.

Read More
Nothing beats having a beer while the sun’s still sitting high in the sky. All the areas included in this article are Kyoto's main neighborhoods, so next time you’re out sightseeing, why not kick your feet up and have a drink with your lunch?
Related keywords
Bars / Pubs Cafes Izakaya All Kyoto Area
New Articles
Enjoy Kyoto with only 10,000 yen a day!
Gion & Kiyomizu Temple
Five restaurants to enjoy New Year’s soba noodles in Kyoto
All Kyoto Area
Hot summer is the time to eat Kyoto curry
All Kyoto Area
View All New Articles
Feature Articles
Kyoto Oden Guide – From Classics to the Unconventional
Kyoto's World Heritage Level Autumn Leaves – What’s Your Plans? Kyoto Autumn Feature
Share
×
Share
Share
Tweet