There are peculiar festivals called “weird festivals” in Kyoto that have their own special customs. These festivals are called the “three weird festivals of Kyoto” and they are something extremely Japanese you won’t forget. 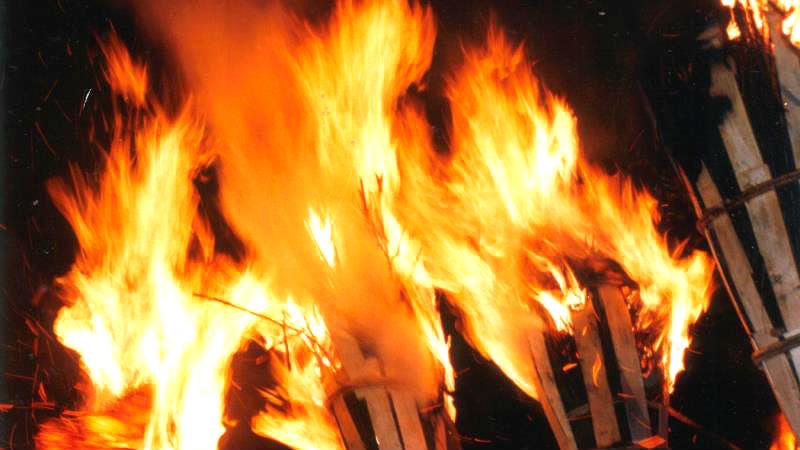 First I’m going to talk about the Kurama Fire Festival that takes place at night every year on October 22. This festival is even more breathtaking than the other festivals that take place in Kyoto. Like you probably already know from the name Fire Festival, in this festival the locals hold burning, crackling torches, and march the town of Kurama with fires burning by their path. 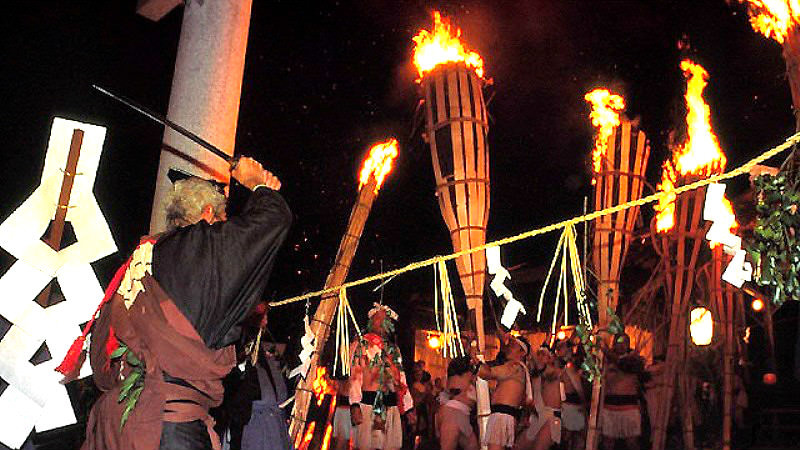 Half naked men hold giant torches and shout peculiar shouts of encouragement while walking around the city. The streets of Kurama are narrow and since once of the biggest festivals in Kyoto, Jidai Matsuri, is also held on the same day, there are so many people in Kurama that the traffic has to be restricted. This is because so many people want to see the exciting Fire Festival.

A portable shrine is carried through the night with the light coming only from the torches. This almost too rare to see sight is something you will not forget for the rest of your life. This lively festival can verily be called a weird one. 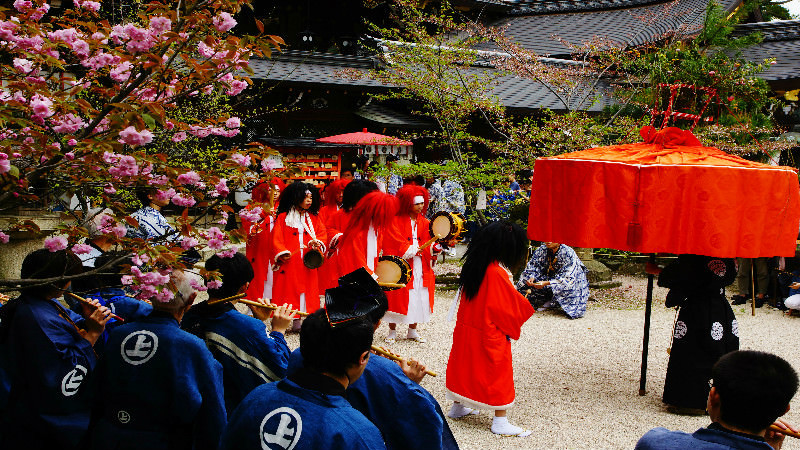 Next I’m going to tell you about the event held at Imamiya Shrine every April, Yasurai Festival. Once upon a time, during the Heian period, there was a pestilence at the time when the petals of cherry blossoms fell. So this festival was started to suppress the spirits of the blossoms, and pray for good health without diseases. 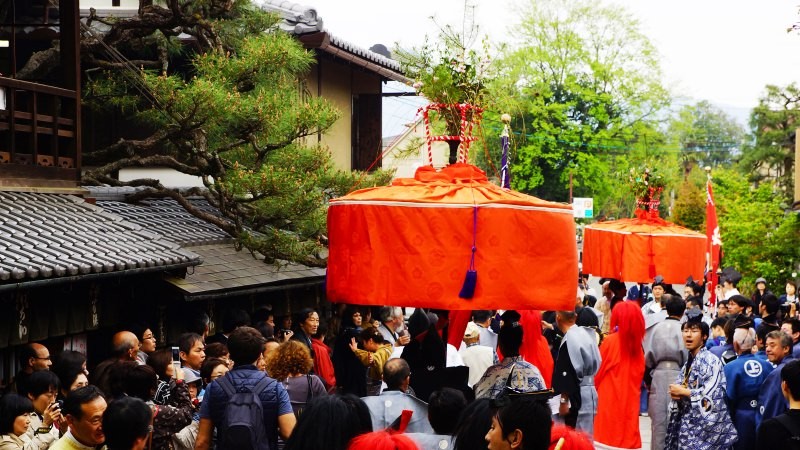 The demons with red and black fur, and the people of the procession holding hanagasa parasols walk slowly toward Imamiya Shrine, and it’s thought that the spirits of disease will stick to these parasols and then led into the shrine and suppressed there.

It is also said that if you go under a hangasa parasol decorated with cherry blossoms or camellia flowers, you will be in good health for a year, so many of the onlookers go under them one by one. The specialty of Yasurai Festival is that you can also join, not only look from the side. 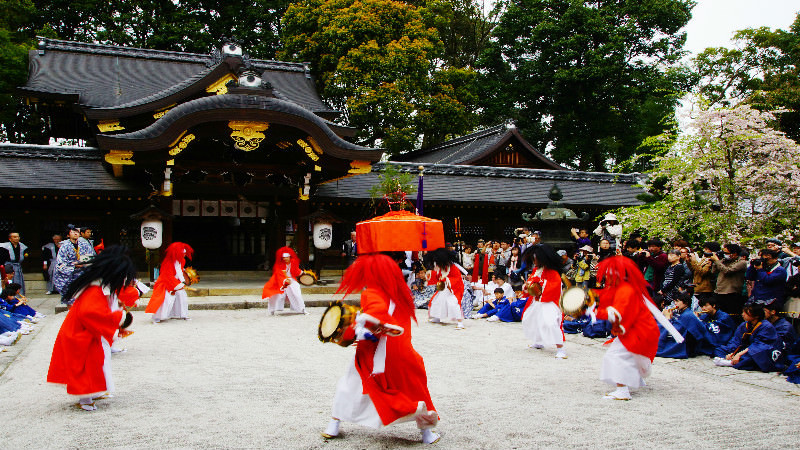 The reason why Yasurai Festival is called a weird festival is in the Yasurai dance performed at Imamiya Shrine. Children from elementary school to high school students dress up as demons and with their black and red fur disheveled they dance violently to the beat of traditional Japanese ohayashi music. They wear garish red coats and white hakama pants making the atmosphere at the dance peculiar, but this festival has been performed for around one thousand years, so you can also feel the weight of history at this event.

Event date: Second Sunday of April
※Only rituals will be held, general attendance will be cancelled in 2022. 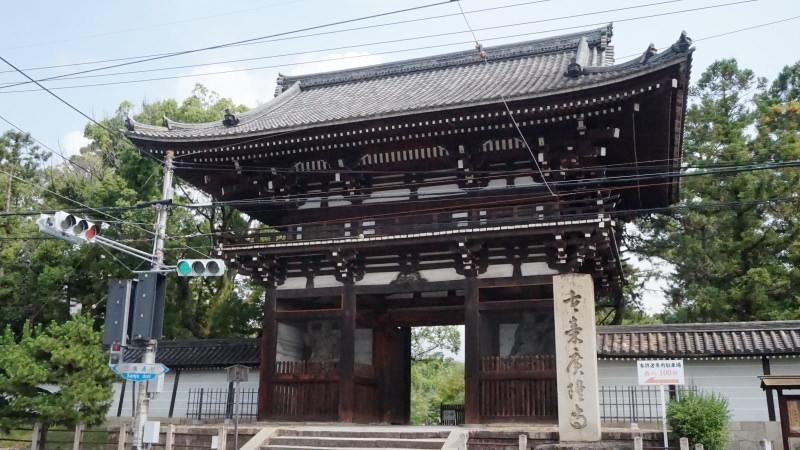 Lastly we have Uzumasa’s Bull Festival, which was held on the beginning of October every year. This festival was held in order to pray for abundant crops and an end to the epidemics, and at this event a god wearing a queer mask rides a bull around the temple attended by demons that hold torches.

Lastly after this god reads a ponderous address to the gods, there is a tussle over the mask and address the god has between the god, demons, and the onlookers, and finally the god and demons run into the temple and the festival ends abruptly.

Among the three weird festivals of Kyoto, this festival is the weirdest. Recently they have had many problems including procuring the bull, so the festival was last held in 2003. It’s a rare thing if this festival is held making it even more precious.

Event date: Beginning of October (the event hasn’t been held since 2003)

I just told you about three historic weird festivals that take place in Kyoto. When you hear the word “weird festival” you tend to think of something really weird, but they have an ancient and honorable origin, and they are traditional festivals. The festivals have a strong local feeling, but how about joining one of them for a special experience?
Related keywords
See See All Kyoto Area Other Kyoto Area Kinkakuji & Uzumasa Kurama & Kibune
New Articles
Guide to the Romantic Kyoto Station Christmas Lights
Kyoto Station
Recommended autumn events in Kyoto!
All Kyoto Area
5 events in Kyoto where you get to see geisha
Central Kyoto Area
View All New Articles
Feature Articles
Kyoto Oden Guide – From Classics to the Unconventional
Kyoto's World Heritage Level Autumn Leaves – What’s Your Plans? Kyoto Autumn Feature
Share
×
Share
Share
Tweet