Kyoto looks normally looks pretty, but when it’s illuminated at night the temples and shrines of Kyoto take on a completely new, mysterious look.

Many of us maybe have an idea of sightseeing in Kyoto being limited to daytime, as normally most temples and shrines close before 5 p.m., but during many illumination events the temples are open late, some even as late as 9 p.m. These events are a great chance to see a different Kyoto: see the traditional mixed with a bit of modernity.

So here we have it, the eight greatest night illumination events of Kyoto! 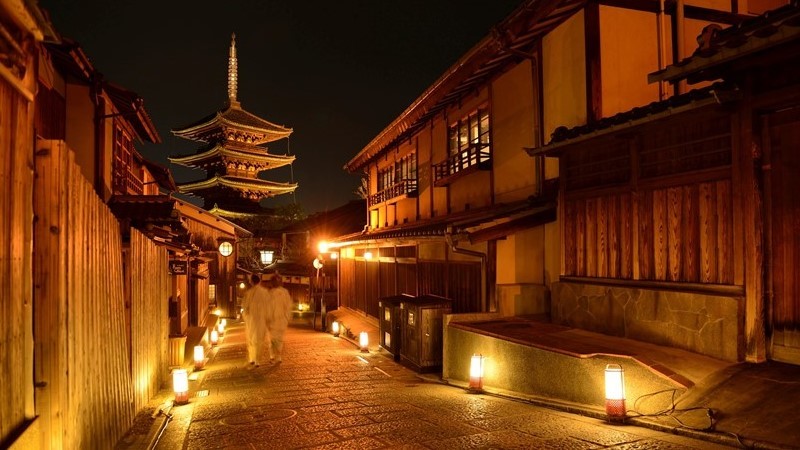 First, we have the one and only Higashiyama Hanatoro in March! During this event the temples and streets of Higashiyama area are illuminated by LED lanterns, bathing the area in mysterious light. The feeling is almost surreal like you had walked into a different dimension, especially when you get to see the woman wearing a fox mask being pulled in a rickshaw in the procession called the fox’s wedding.
This event is remarkable also because so many of the famous temples have illumination events. Kiyomizu-dera Temple, Kodai-ji Temple, Chion-in Temple, and Shoren-in Temple among others are illuminated during this event, so a great way to enjoy the Higashiyama area in March is to go see some temples when it’s still not dark and then enjoy the temple illuminations at night. 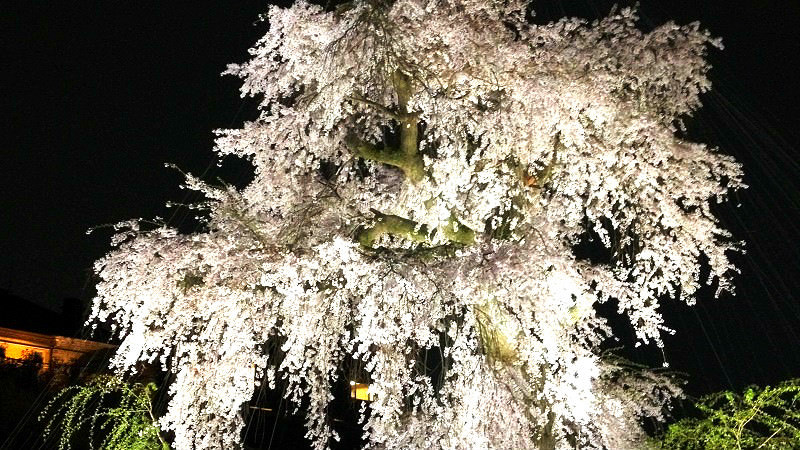 6.    Randen night tram cherry blossom tunnel *This event will be closed until the further notice due to the cherry tree maintenance. 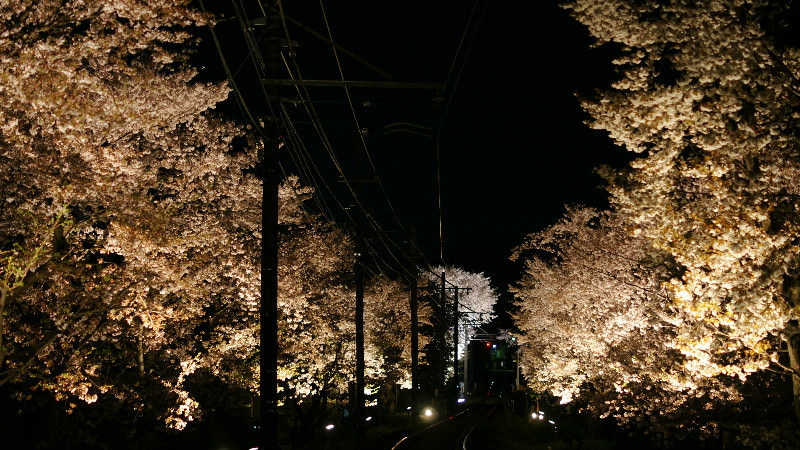 Keifuku Randen is the only tram in Kyoto, and during the cherry blossom season, you can see the cherry blossoms by the tram tracks illuminated at night. During  this event the train will slow down at the places with the best views so this is a great chance to see night blossoms in Kyoto. One of the greatest things about this event has to also be that you can take pictures of the trams running through the cherry blossoms tunnel by getting off at the stops in the middle and waiting for the next train. The interval between trams is between 10 and 20 minutes so it should not take too long to wait for the next one. 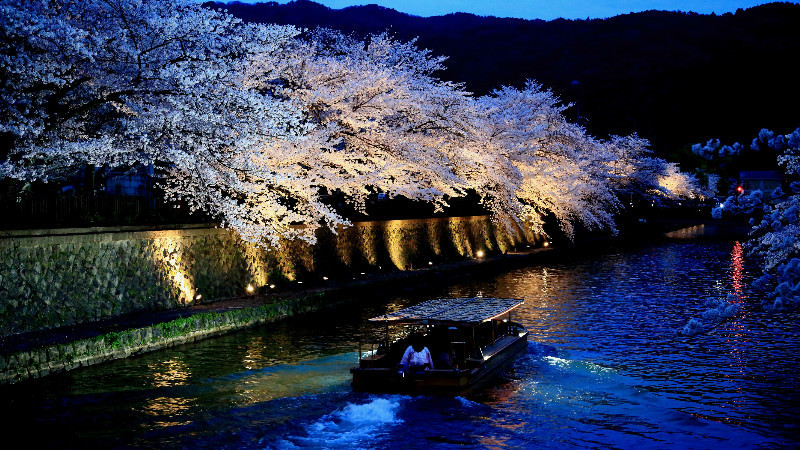 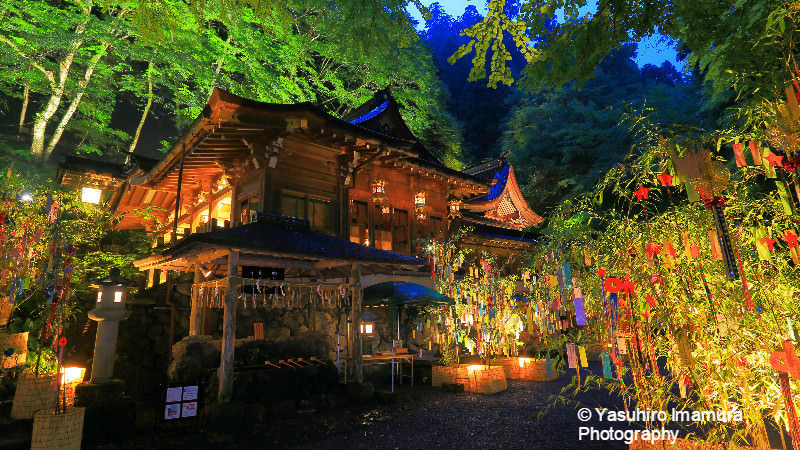 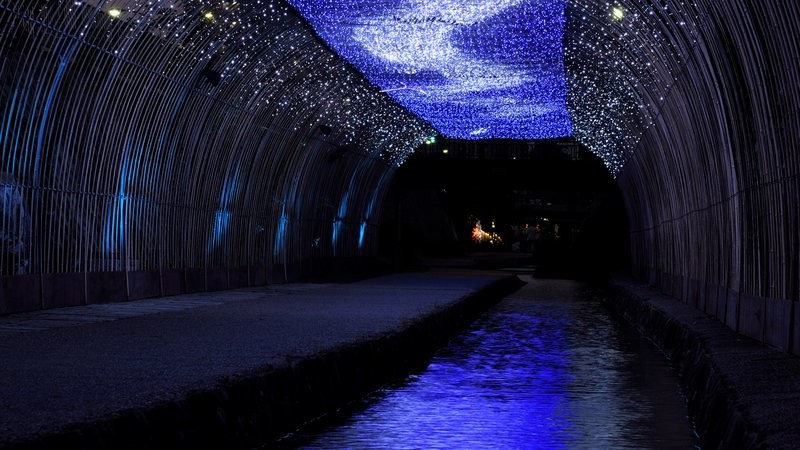 Tanabata, or the Star Festival, is a festival in Japan for the two deities Orihime and Hikoboshi. Kyo no Tanabata is like you can probably guess from the name, a Tanabata event in Kyoto. This event is held in August according to the lunar calendar so the precise date changes a bit every year.
In the picture you can see the main attraction of the event, the “Milky Way of Light,” but the temples and shrines around the area will also have nighttime illumination events too.
Read More
2.    Eizan Electric railways tunnel of autumn leaves 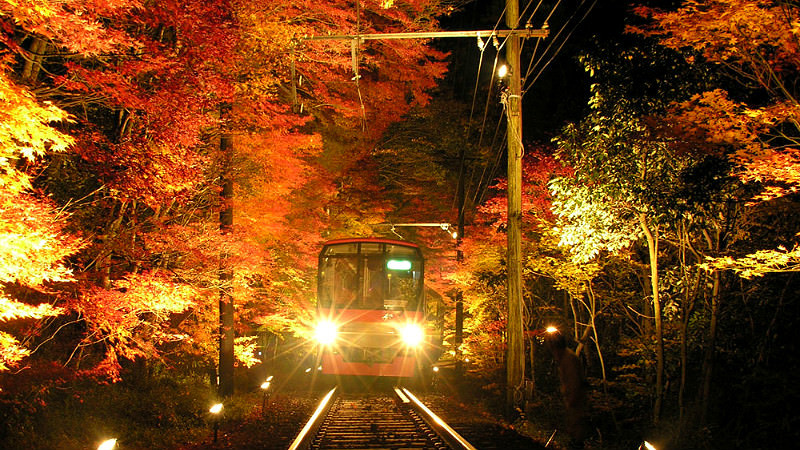 There are two events above the rest in Kyoto: cherry blossom viewing in spring and autumn leaves viewing in autumn. And like our number 6 where you could see cherry blossoms from a tram, now we have an event where you can see autumn leaves from a train. Eizan, or as it is often called in Japanese, Eiden, is a train line that can take you either to Mt. Hiei or to Mt. Kurama.
During the autumn leaves season you can go through a tunnel of autumn foliage by taking the train. The train slows down at the best places so you can have time to admire the scenery.
Read More 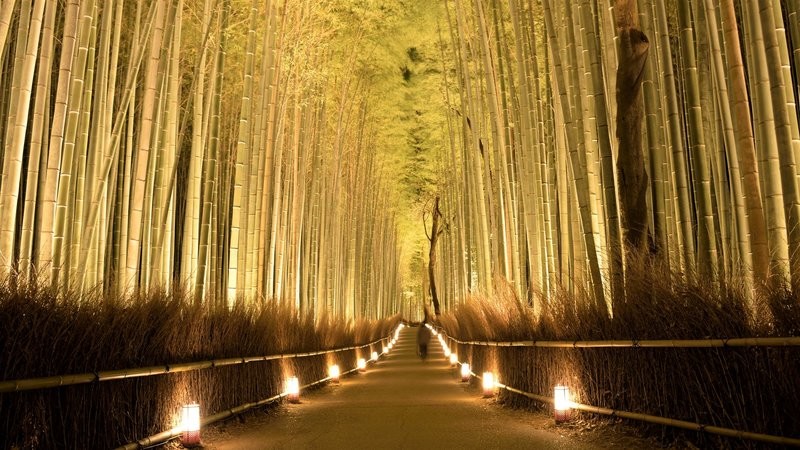 The area of the event is so large that there are also places with few people; you can view the illuminated sights of Arashiyama without having to feel stressed, though the Bamboo Grove is, of course, crowded as usual. There is really a lot to see at the event but my recommendation would have to be the Okochi Sanso Villa which is illuminated beautifully and from where the night view of Kyoto is unbelievably great.

There we have it, the best illumination events of Kyoto. While I personally really like both Hanatoro events, this is not to say the others weren’t great in their own accord. Randen and Eiden events where you get to see illuminated cherry blossoms and autumn leaves, are something special you can only experience in Kyoto. No matter which one of these events you go to, I’m sure it will become an unforgettable experience.
Related keywords
All Things To Do All Kyoto Area
New Articles
Mysterious night illumination events in Kyoto in autumn!
All Kyoto Area
Recommended autumn events in Kyoto!
All Kyoto Area
Kyoto’s Jidai Matsuri – Festival of the Ages
All Kyoto Area
View All New Articles
Feature Articles
Kyoto Oden Guide – From Classics to the Unconventional
Kyoto's World Heritage Level Autumn Leaves – What’s Your Plans? Kyoto Autumn Feature
Share
×
Share
Share
Tweet