Ways to Enjoy the Mitarashi Festival

Pray for good health and soak your feet in Shimogamo Shrine’s Mitarashi Pond. Ways to enjoy the Mitarashi Festival and nearby restaurants.

Every year around the day of the Ox (late July to early August) at Kyoto’s cultural heritage site, Shimogamo Shrine, the Mitarashi Festival is held.

Take a candle and as you make an offering to the gods and pray for your family’s health, soak your feet in the Mitarashi Pond located in the Shrine.

As you can participate in the festival with both friends and family, this article will focus on the different ways to enjoy the festival and showcase some popular stores nearby that you can swing by on your way home.

What is the Mitarashi Festival? 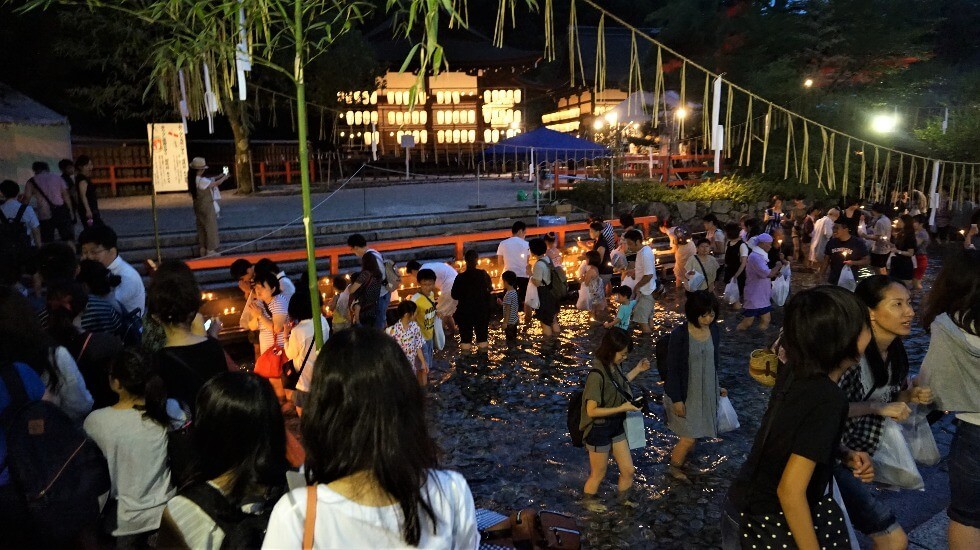 The Mitarashi Festival was originally held so that Heian Period aristocrats could wash themselves of their crimes and sins.

However, in modern day the festival is mostly enjoyed for its summery atmosphere and its ritual of dipping your feet in the cool water during the hot summer month of July, which is thought to be good for your health and childbirth.

The festival is loved and cherished by everyone around as people of all ages, from small children to older people, can join in.

Note that the water in the pond goes up to about the knees of an adult, so please take care when bringing children. 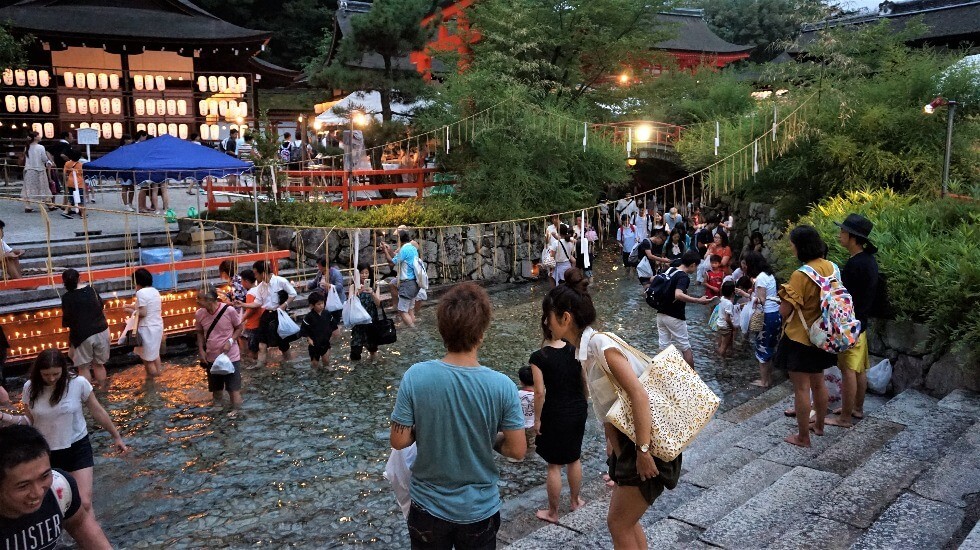 As the water comes up to about your knees, it is best to wear shorts and easy to take off shoes. Similar to many other festivals, some people wear traditional Japanese Yukata as well, giving the festival even more of a summery atmosphere.

We also recommend bringing a towel. 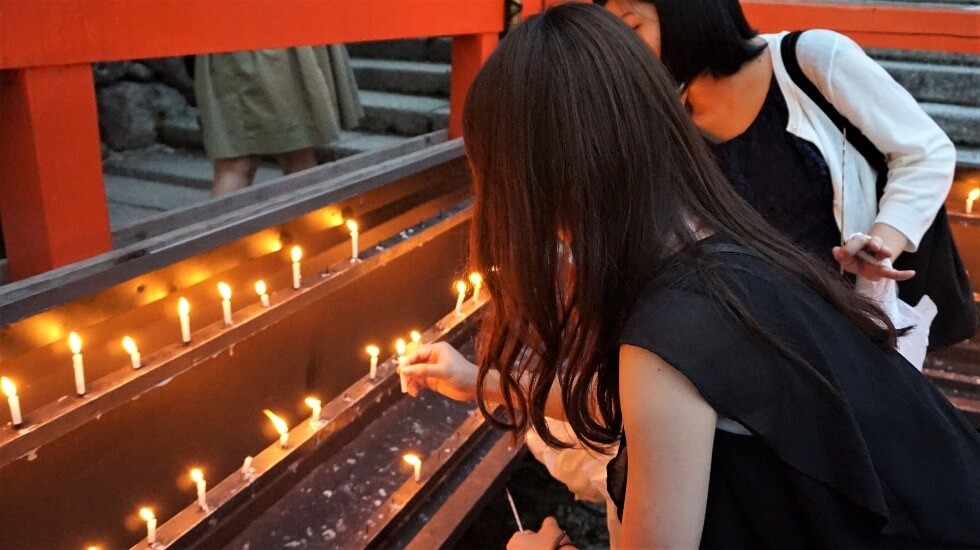 Take a candle and slowly walk forward as not to extinguish the flame, finally, place the candle it down and make an offering to the Shinto gods. Usually, you can’t enter the Mitarashi river, where the offering stand is located, so this is a particularly special experience that you can only do during this festival. 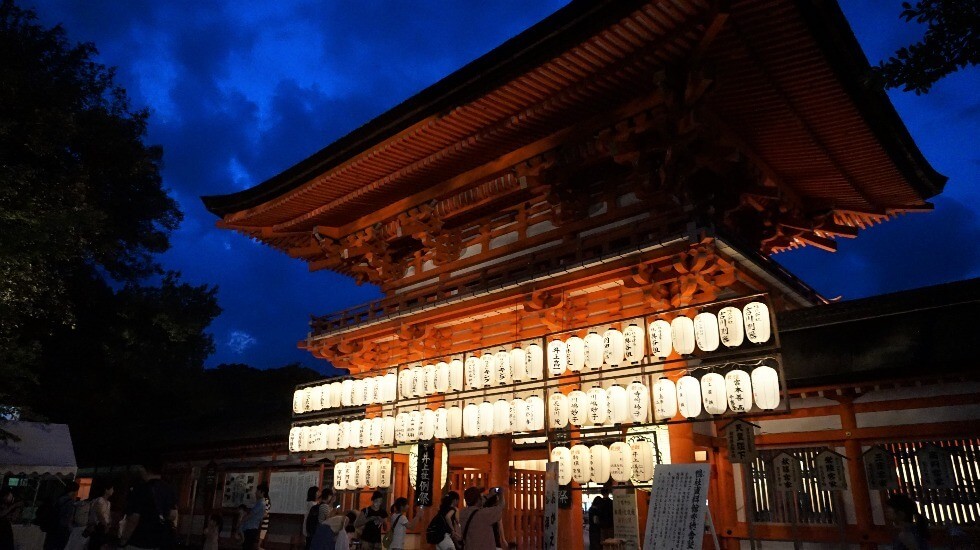 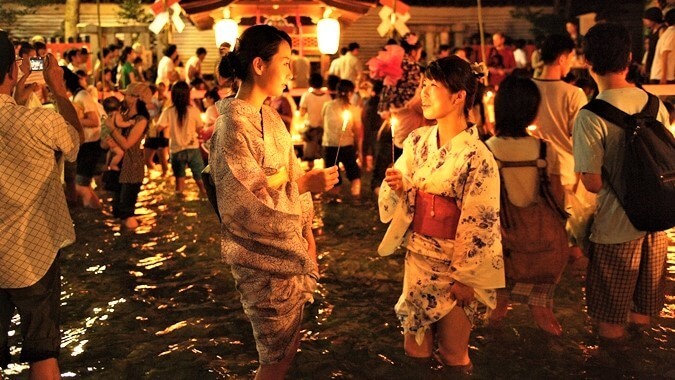 The atmosphere of the festival in the early evening, just as it begins to get dark, is simply breathtaking.

Backlit by the Japanese lanterns, the festival sees a shift in tone and becomes absolutely magical. Many people flock to the festival around this time, so for those who aren’t big fans of crowds, we suggest visiting during the day. 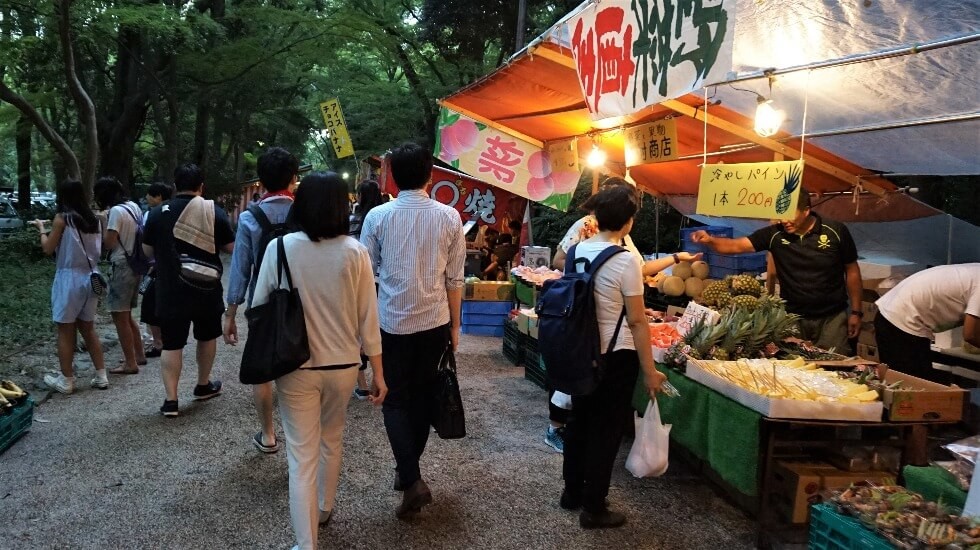 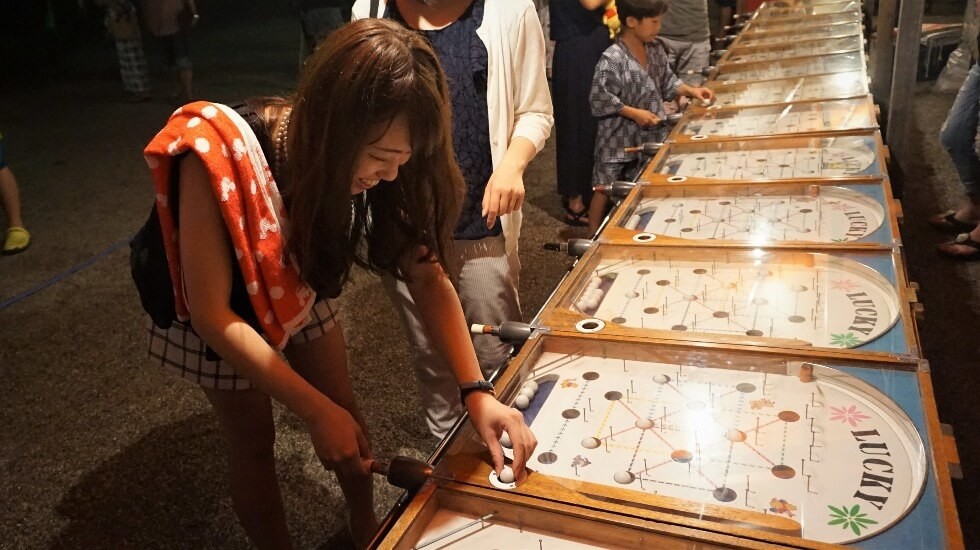 A plethora of different festival stalls fill the grounds of the shrine during the festival.

With stalls ranging from Okonomiyaki, Takoyaki, and Udon, to ones such as that pictured above, you are given so many options that it’s hard to pick what to get.

Also, as the stalls don’t just offer food, but games as well, the festival is great for those with children too. 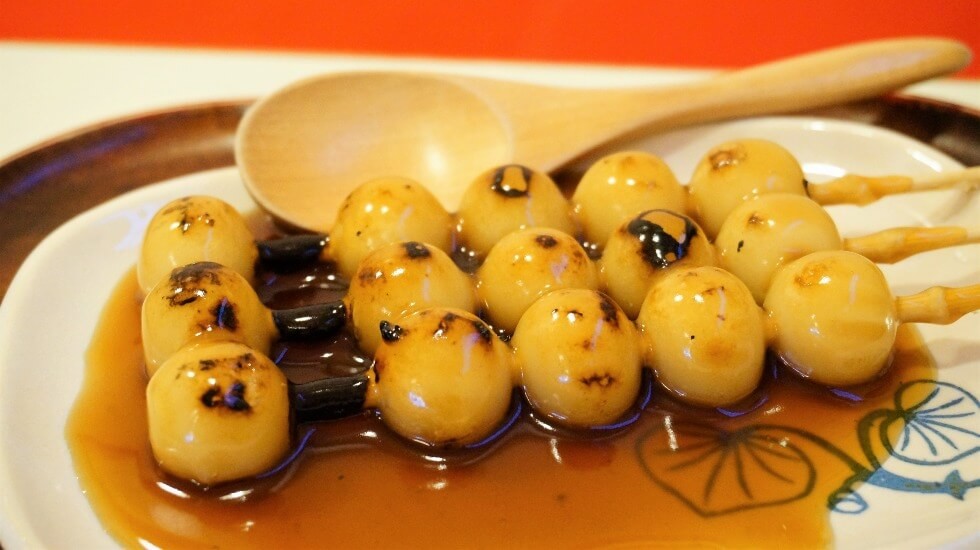 Located near the world heritage site of Shimogamo Shrine, Kamo Mitarashi Chaya is said to be the inventor of the famous sweet soy sauce lathed balls of mochi known as Mitarashi Dango.

The Mitarashi Dango of this shop are meant to represent the human body. As pictured above, there are five balls of mochi, with the separated top one representing the head.

The balance of the chewy texture of the Dango balls of mochi together with the sweet and salty tare sauce is irresistible.

Kamo Mitarashi Chaya is a store with a rich history, so it is very much worth the visit. 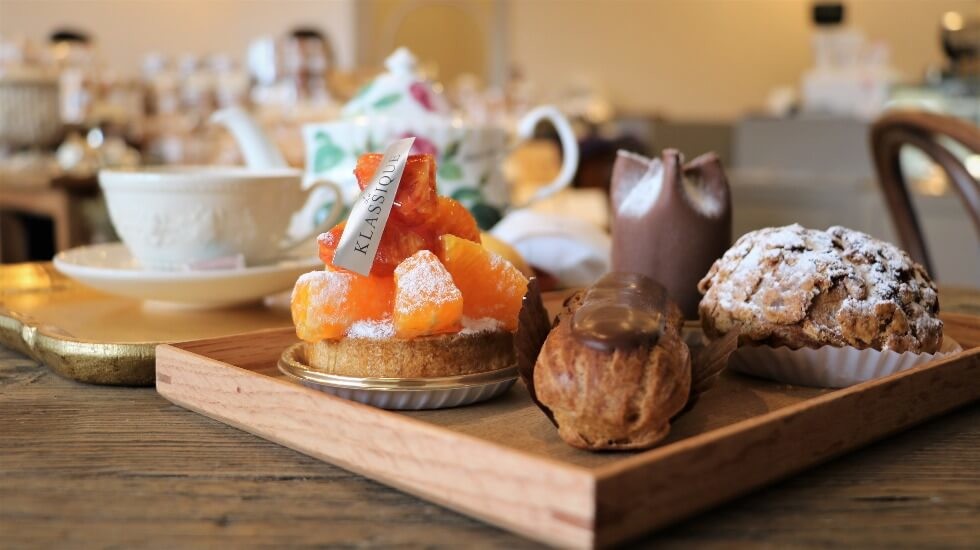 Sitting just outside the Shimogamo Shrine’s Tadasu no Mori forest, La KLASSIQUE is a patisserie that became an instant hit as soon as it opened.

La KLASSIQUE’s signature dessert is their cute lemon cake which is wrapped in paper and takes the motif of a giant piece of candy. The lemon of the cake only has a mild sourness, which gives the cake a deliciously refreshing flavor.

Another dessert that is gaining much attention is their Mousse Chocolat. A tower of chocolate hides the mousse, which itself is filled with pieces of banana and orange that work perfectly with the flavors of the chocolate.

La KLASSIQUE also offers a range of other cakes and desserts, so do take a visit if you have the change. 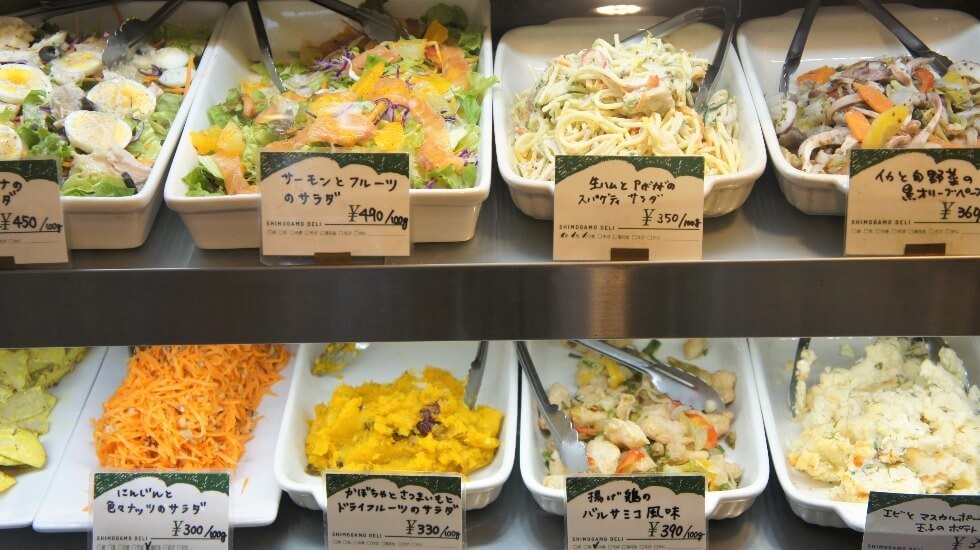 This deli offers vegetable-packed, healthy salads without the use of any chemical additives. Each salad is bright and colorful and is sure to have your stomach rumbling.

Out of the salads that line the cabinet, you can choose three to construct your salad with.

Shimogamo Deli is an excellent option for those wanting to get something healthy to eat while traveling around Kyoto. 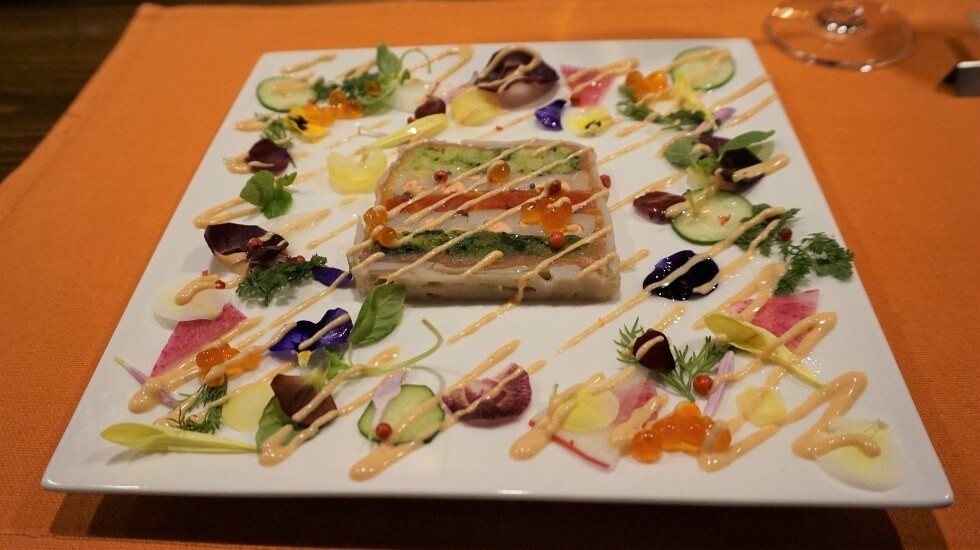 Enjoy some satisfying French cuisine in the relaxed atmosphere of a refurbished Kyoto townhouse at “epice.”

epice receives direct deliveries of vegetables from their contracted farmers and Kyoto’s Ohara region’s morning market. They are also particular about working with pesticide-free and organic vegetables, which makes their dishes simply out of this world.

Treat yourself to one of epice’s full courses and enjoy everything from entre to dessert.

Read More
Kyoto is said to have festivals all year round; however, there aren’t many that the whole family can participate in. Mitarashi Festival is one that people of all ages, from small children to older people, can enjoy. The area surrounding Shimogamo Shrine is also home to a number of absolutely amazing restaurants, so we highly recommend checking this one out. Grab some friends or family, and welcome the summer with the Mitarashi Festival.
Related keywords
All Things To Do Temples & Shrines Cultural Experience Summer All Kyoto Area Shimogamo Shrine & Kitayama
New Articles
The beginning summer in Kyoto is fun too! Traditional festivals of Kyoto in May
All Kyoto Area
Kyoto’s summer festivals! Top traditional festivals in July
All Kyoto Area
Top Kyoto events you just have to go in May and June
All Kyoto Area
View All New Articles
Recently Picked Up Articles
Kyoto’s summer festivals! Top traditional festivals in July
All Kyoto Area
24
Kyoto Gojozaka Pottery Festival – Plenty of Pretty Plates
Central Kyoto Area
13
Lighting up Kyoto’s Summer Night Sky – Gozan no Okuribi!
All Kyoto Area
8
The 4 Best Restaurants around the Kyo-no-Tanabata Festival!
All Kyoto Area
8
Up for some ice-cold beverages? Summers in Kyoto may be hot, but these five early-summer events are extremely refreshing!
All Kyoto Area
3
Feature Articles
Kyoto Oden Guide – From Classics to the Unconventional
Kyoto's World Heritage Level Autumn Leaves – What’s Your Plans? Kyoto Autumn Feature
Share
×
Share
Share
Tweet