We checked out the Kyoto summer staple, Gojozaka Pottery Festival!

◆ About the Gojozaka Pottery Festival

The Gojozaka Pottery Festival is Japan’s largest-scale pottery festival and is held on the street of Gojozaka, the founding location of Kyoto’s famously elegant and refined pottery, “Kiyomizu-yaki.”

Started over 90 years ago, this festival has expanded to be the largest of its kind in Japan, and has come to feature over 400 stalls and be visited by bargain hunters from all across Japan.

Additionally, stalls by recently much talked about young potters are were out in full force too, and it seems some come specifically to get a chance to see pieces by these potters as well.

Checking out the actual Festival 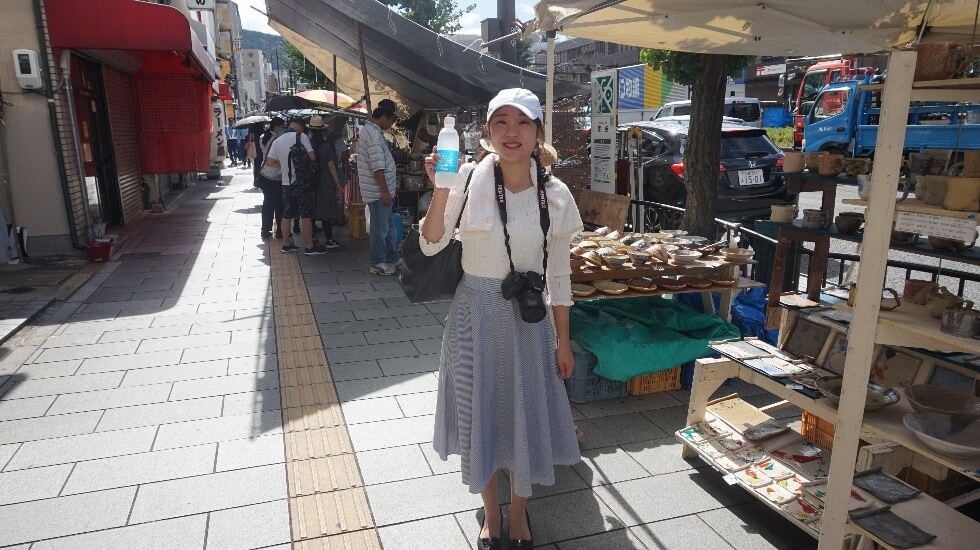 We arrived at Gojozaka, and in true Kyoto summer fashion, it was incredibly hot! In order to stave away heat stroke, I made sure to bring a bottle of water and chuck on a cap.

At the Gojozaka Pottery Festival, there is a great deal of people, so you won’t be able to use sun umbrellas. Because of this, it’s essential that you do not forget to bring a hat! 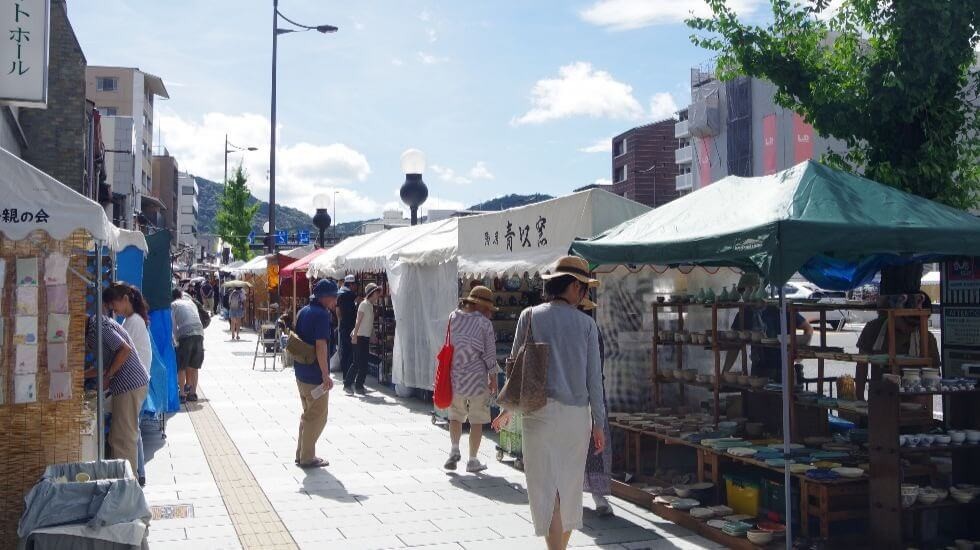 9 AM and the festival’s just waking up.

At only 9 in the morning, there are already rows and rows of stalls, and we were a little lost at where to begin. 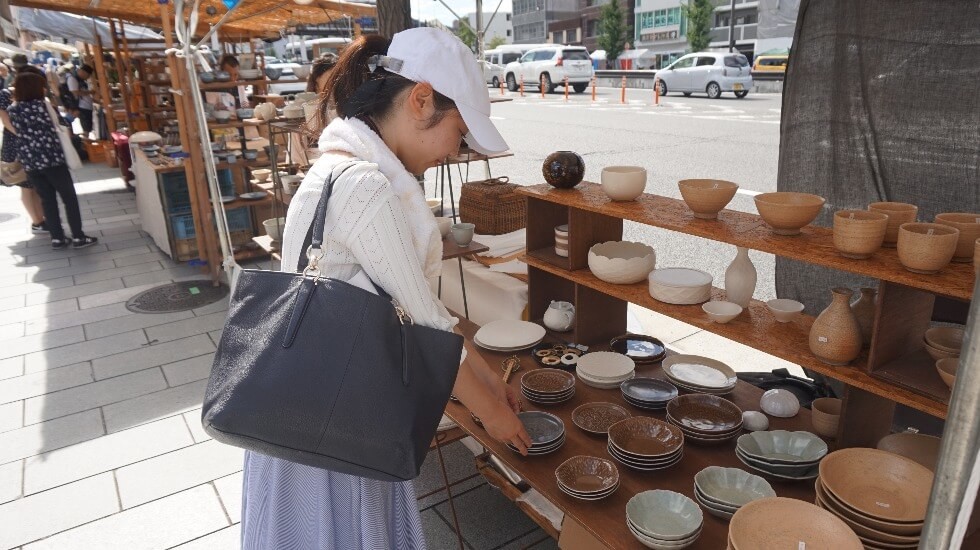 With hopes of finding some that pique our interest, we began to work our way throught he festival, starting at the begging. 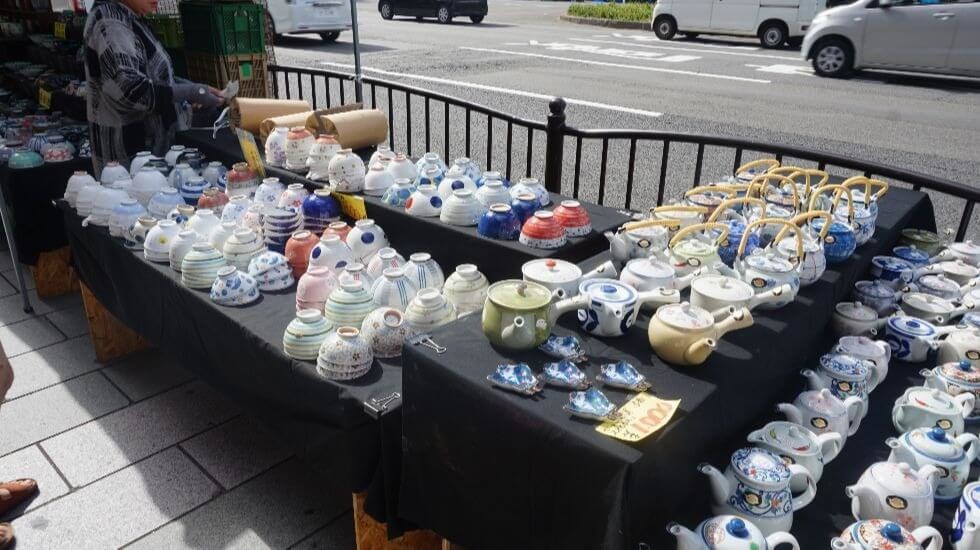 Even though we had just begun, there were already an overwhelming amount of pieces in front of us. As we foraged through them, looking for something that caught our eye, it felt like we were on a treasure hunt of some kind. 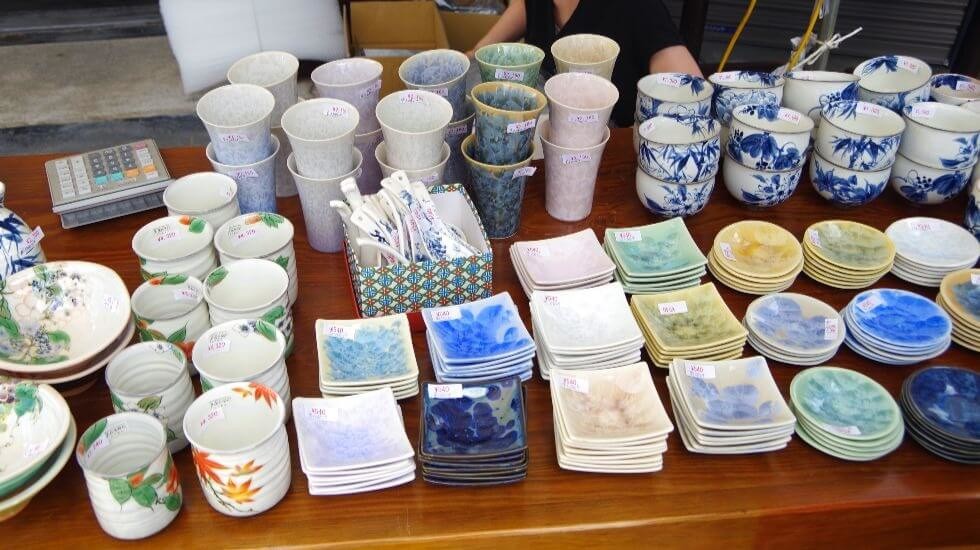 It felt nice even just looking at such beautiful pottery.

And despite their wonderful designs, most of them were quite reasonably priced and definitely not as expesive as we expected them to be. 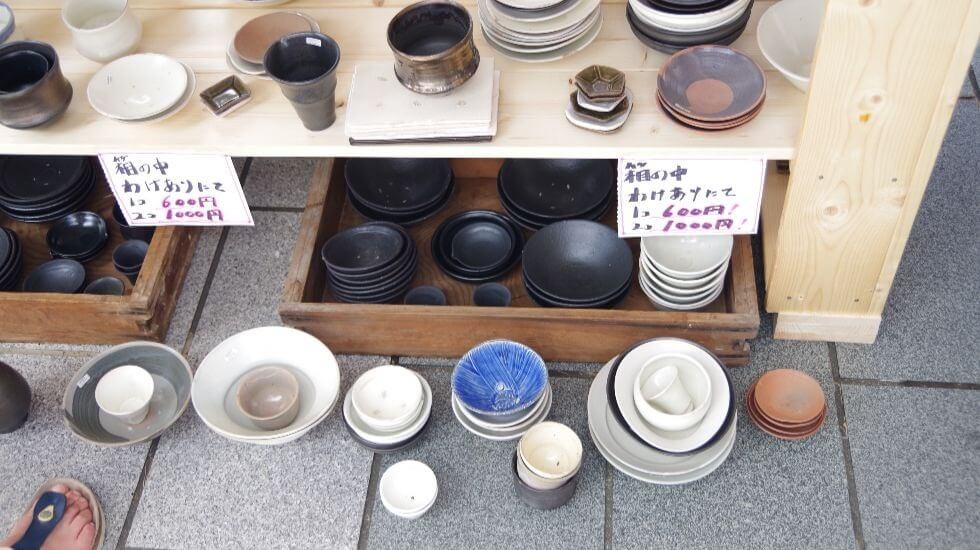 There were even defects being sold as well. And while they may be “defects,” it’s only because they might have a little ship here or there or be a little faded, so we thought they were a bargain at such a low price. 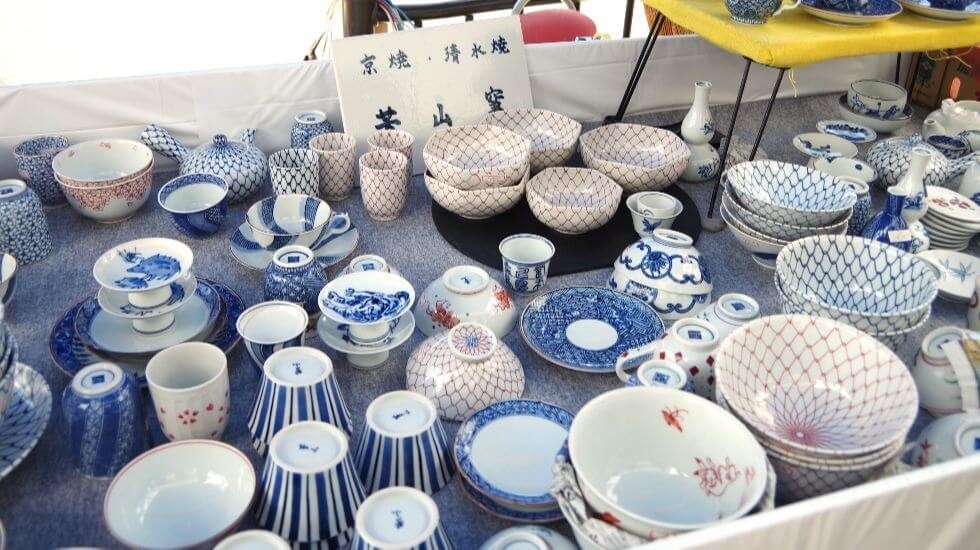 Here is some Kiyomizu-yaki pottery; how beautiful? 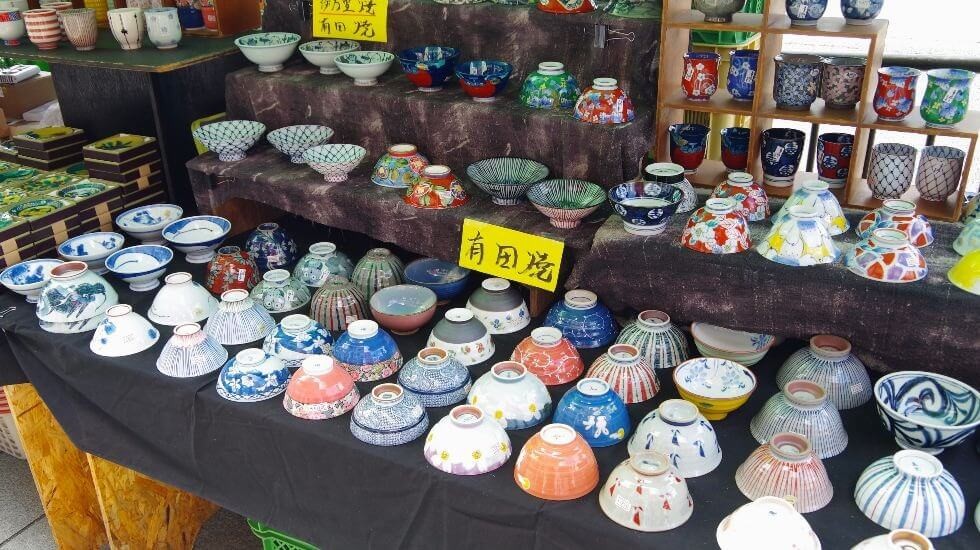 These are Arita-yaki, pottery from Saga Prefecture. 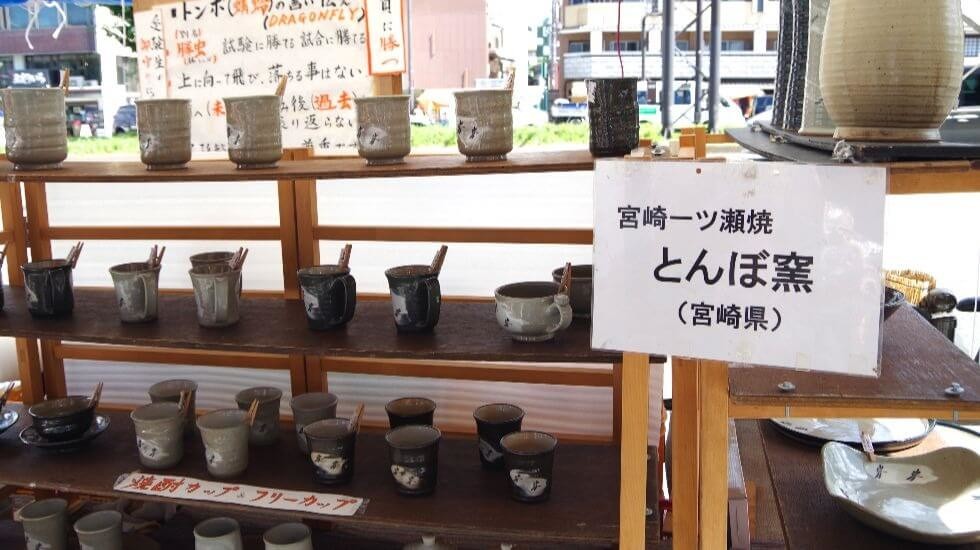 These were pieces by a potter all the way from the southern Japanese prefecture of Miyazaki! Each piece featured a wonderfully gloomy and brooding color palate.

With a number of similar stalsl, this market gave us an opportunity to get a look at pottery from not only Kyoto, but all across Japan! 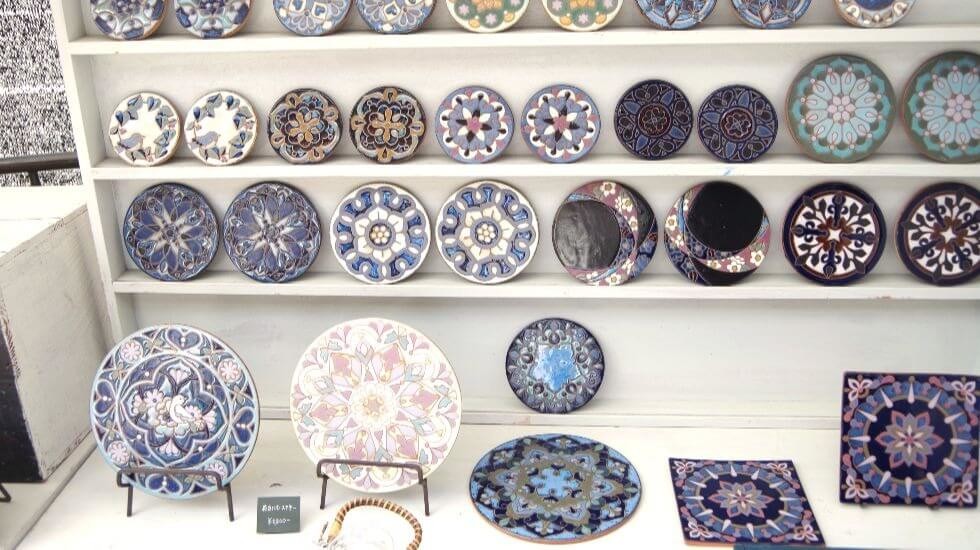 These were some pieces that felt relatively modern. Such new pieces of pottery have a unique feel to them and are good in their own way when compared to older pottery. 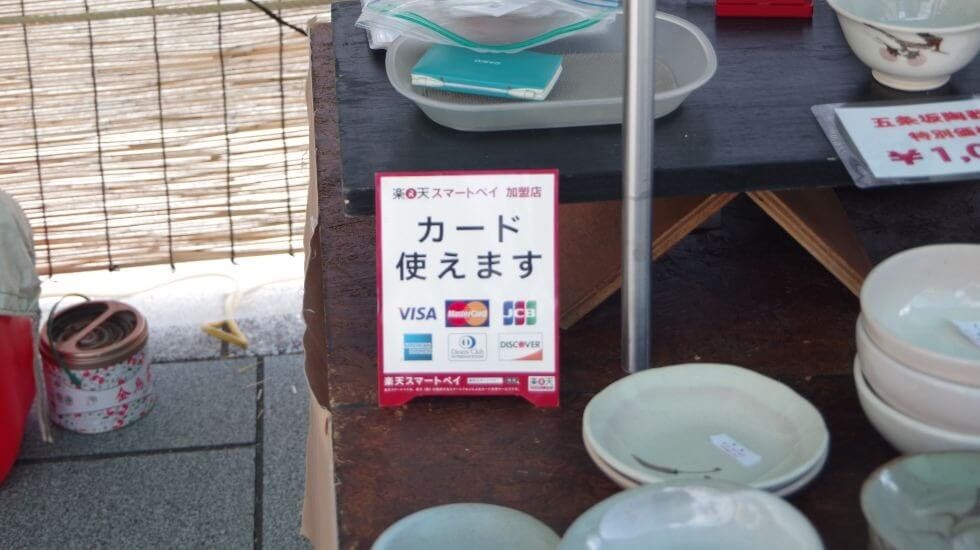 There were even stalls which allowed payments through credit cards and PayPay! 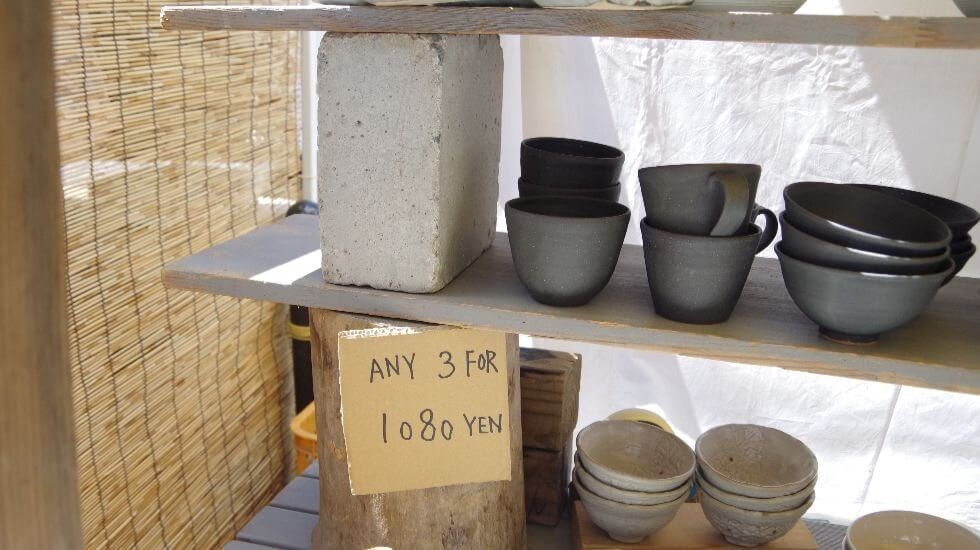 Some stalls even had English! An excellent idea as there were quite a few visitors from overseas at the festival too! 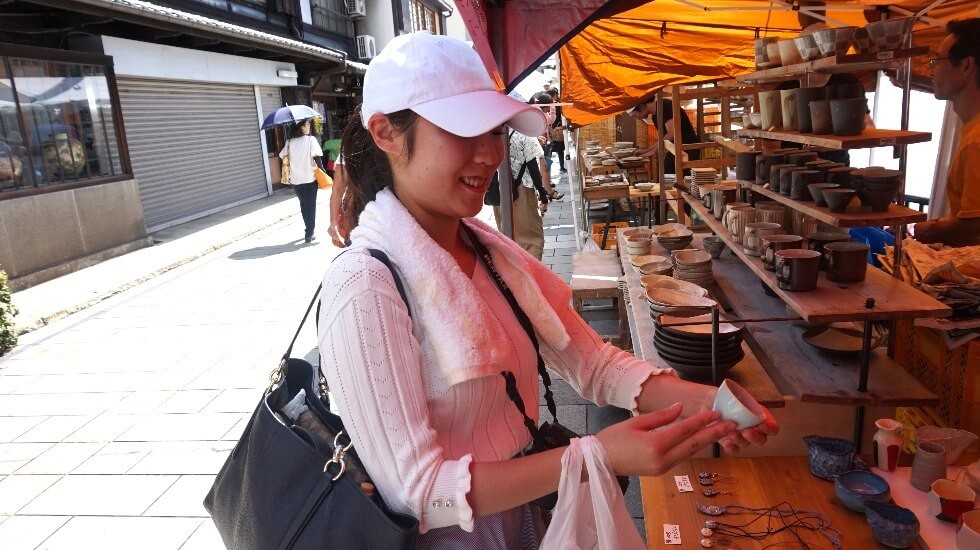 We had quite a good look around, and everything was so nice… if only we could go home with all of them. Although, I live by myself and definitely don’t need that many plates around… 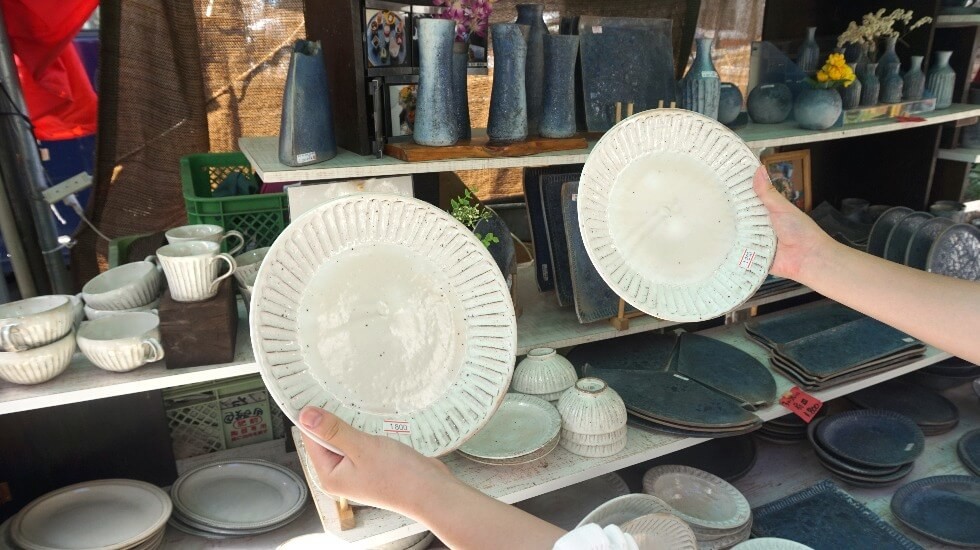 Ah! These are so cool!

Exactly what I was looking for! The shape, the size, the color, it’s just what I wanted!

There was no way I was leaving without these! 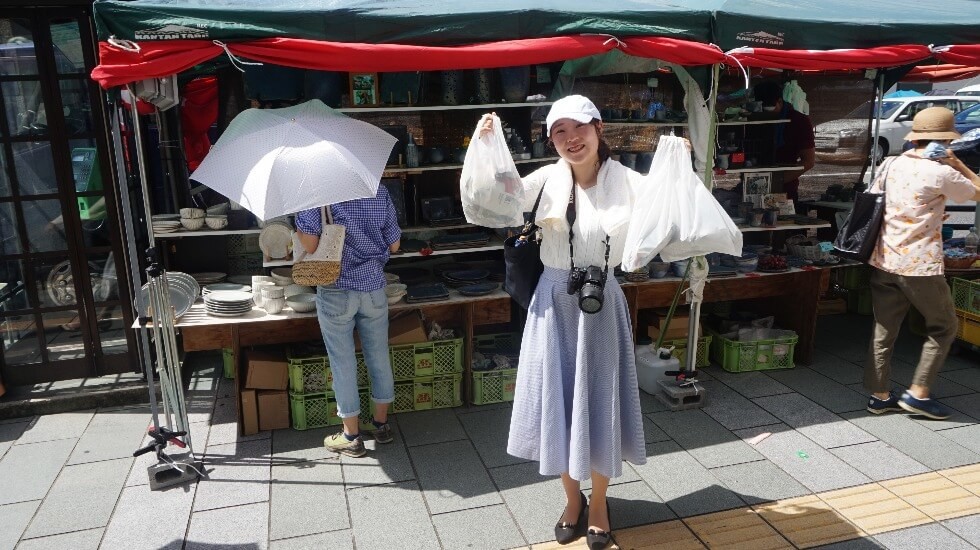 We got our hands on some beautiful pieces of pottery and had a great time! This pottery festival was truly just the best!

How did you like our wee walk through the Gojozaka Pottery Festival? Not many pottery fairs offer this amount of choice, and at such reasonable prices too. This festival is a unique and wonderful chance to get your hands on beautiful pottery from not only Kyoto but all corners of Japan too. With the countless number of stalls, I was able to enjoy perusing through all kinds of pottery and had a great time. The Gojozaka Pottery Festival is a definite must check out for any lovers of Japanese pottery! The festival only runs from the 7th to 10th of August, so for those unable to make it this year, definitely take the chance next year to check it out.
Related keywords
All Things To Do Cultural Experience Other Things to Do Antiques Summer Central Kyoto Area
New Articles
The beginning summer in Kyoto is fun too! Traditional festivals of Kyoto in May
All Kyoto Area
Kyoto’s summer festivals! Top traditional festivals in July
All Kyoto Area
Top Kyoto events you just have to go in May and June
All Kyoto Area
View All New Articles
Recently Picked Up Articles
Kyoto’s summer festivals! Top traditional festivals in July
All Kyoto Area
20
The 4 Best Restaurants around the Kyo-no-Tanabata Festival!
All Kyoto Area
8
Ways to Enjoy the Mitarashi Festival
All Kyoto Area
8
Lighting up Kyoto’s Summer Night Sky – Gozan no Okuribi!
All Kyoto Area
6
Up for some ice-cold beverages? Summers in Kyoto may be hot, but these five early-summer events are extremely refreshing!
All Kyoto Area
2
Feature Articles
Kyoto Oden Guide – From Classics to the Unconventional
Kyoto's World Heritage Level Autumn Leaves – What’s Your Plans? Kyoto Autumn Feature
Share
×
Share
Share
Tweet