Quaking in our boots, we went and checked out the bloodcurdling haunted house that suddenly appeared in downtown Kyoto, Shijo Kawaramachi!

Summer is the season of scary stories.

In Japan, listening to scary stories and sending shivers down their spines is one way people stave off the hot summer heat.

This summer, from 7/20 to 8/31, a spooky haunted house appeared right in the heart of downtown Kyoto. Its name, Shijo Kawamrachi.

Update: Thanks to popular demand, Shijo Kawaramachi has been extended until September the 15th!

In Japanese, “Shi” carries many meanings, one of the most prominent being, death. 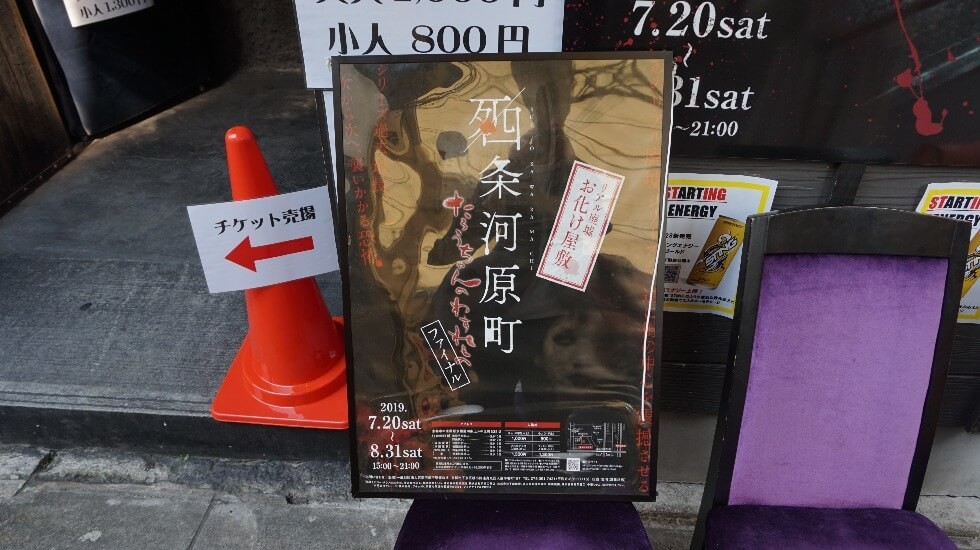 The haunted house Shijo Kawaramachi adopts the premise that you must go down into an abandoned basement and retrieve something a missing boy lost.

This premise of having to retrieve this little boy’s lost things is actually a series of haunted houses. In the past, the haunted houses have been set in abandoned schools and other such ruins; however, this time around, it’s set in an actual abandoned building downtown which is set to be torn down.

Not only is this one the longest courses in the series, but it also takes the form of a mission where participates head in as groups and only proceed once they complete the given tasks. 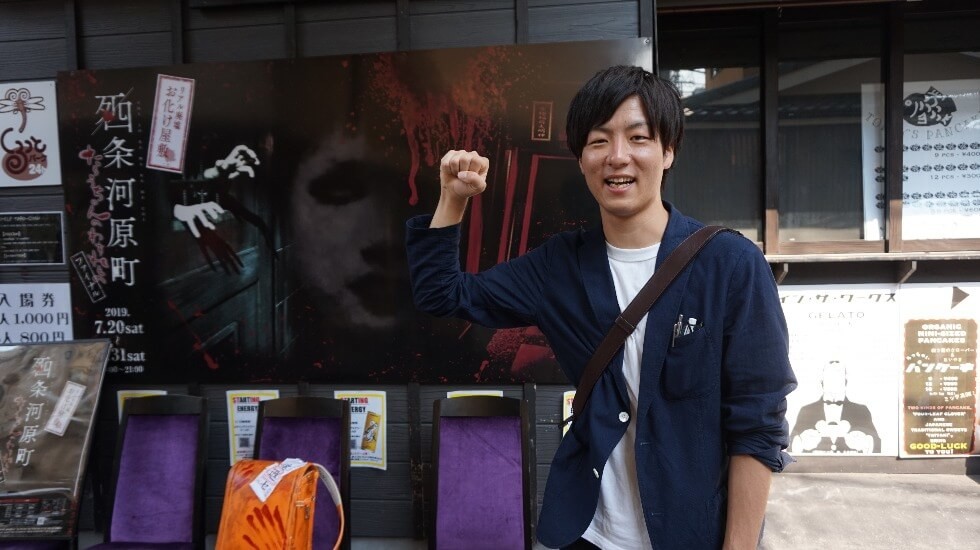 Our writer Shin heard the reviews and decided he’d be brave enough to check it out for himself. 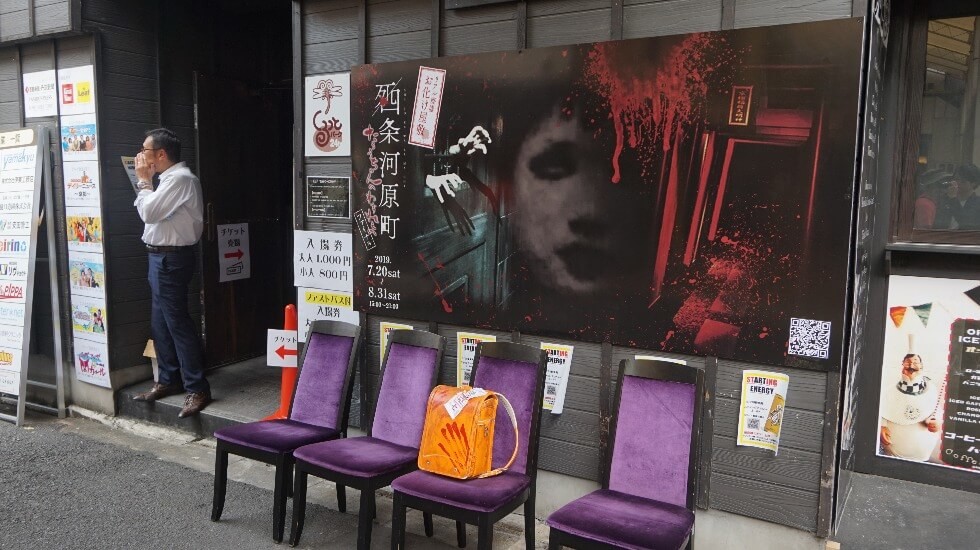 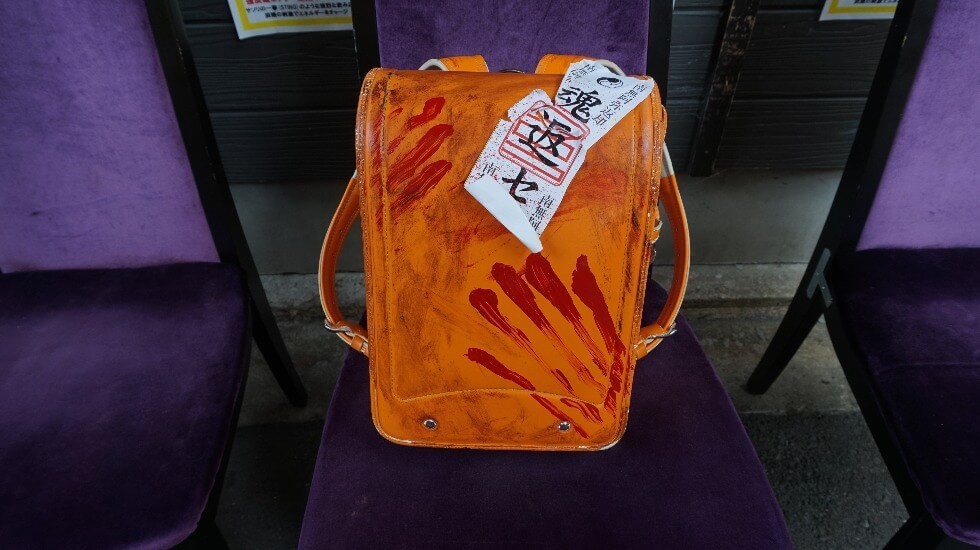 The above picture features what the haunted house looks like from the outside.

In addition to the posters, you can also see the missing little boy’s backpack outside too, giving the haunted house a sense of realism and letting you have a taste of what’s about to come. 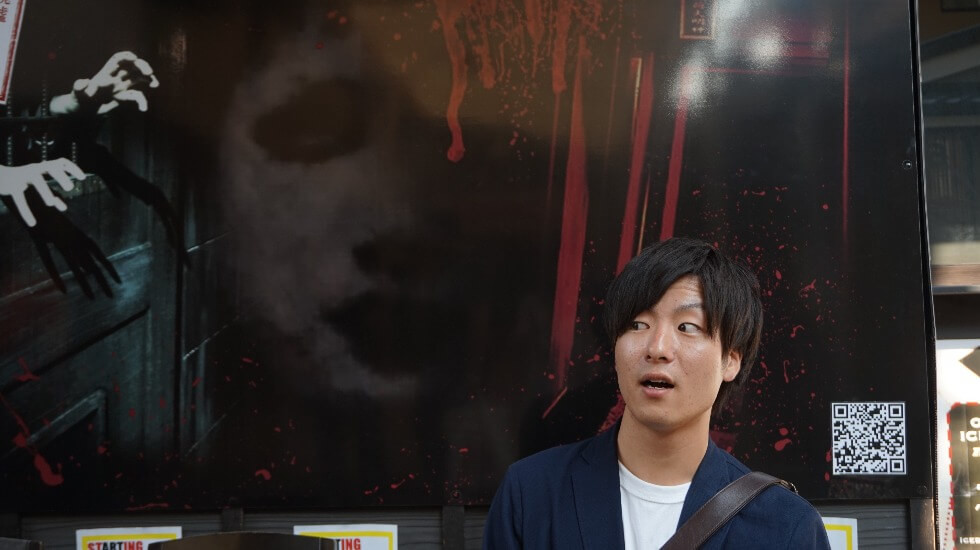 The posters were especially impressive, and you could see many people stopping in their tracks as they walked past. 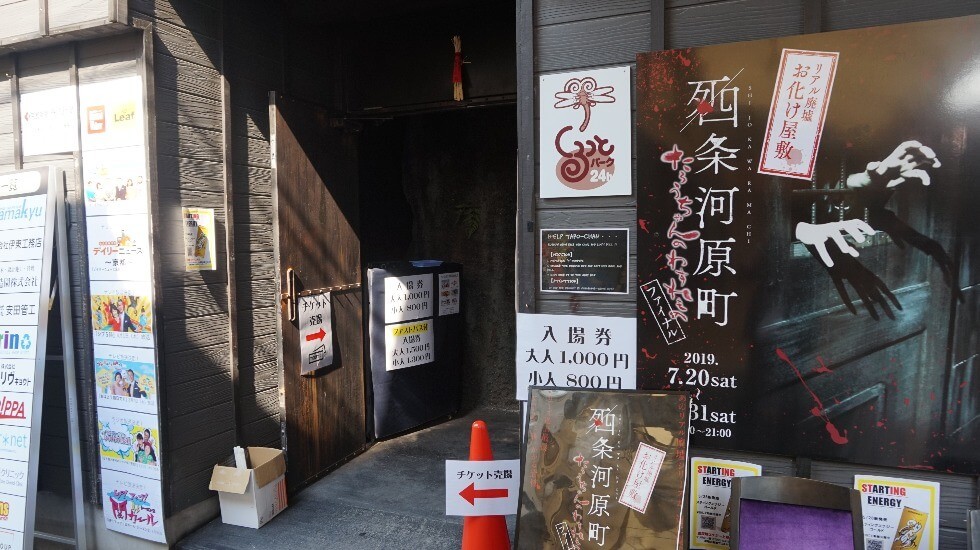 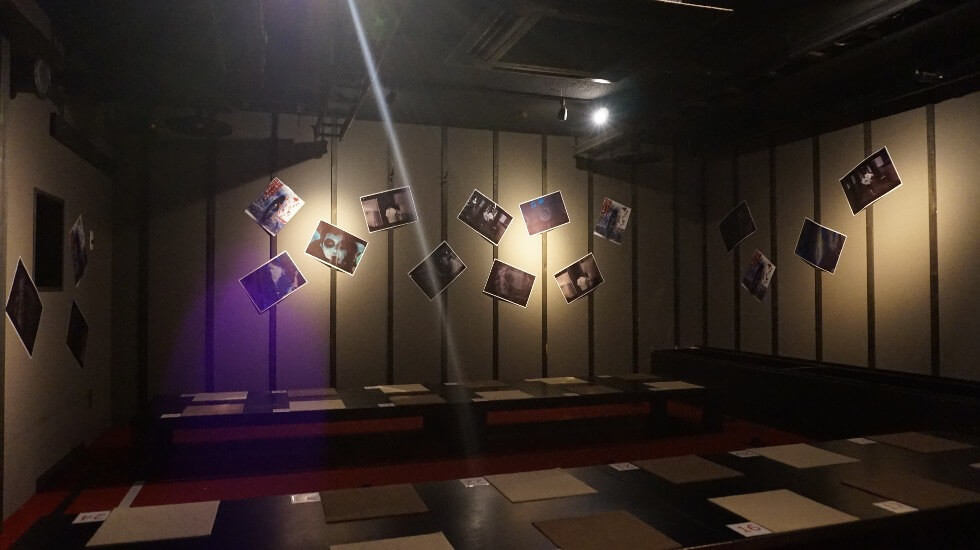 After you enter, you first have to pass through a waiting room.

You don’t brave the haunted house alone either. Instead, you team up with the closest four people in line and head in as a group. 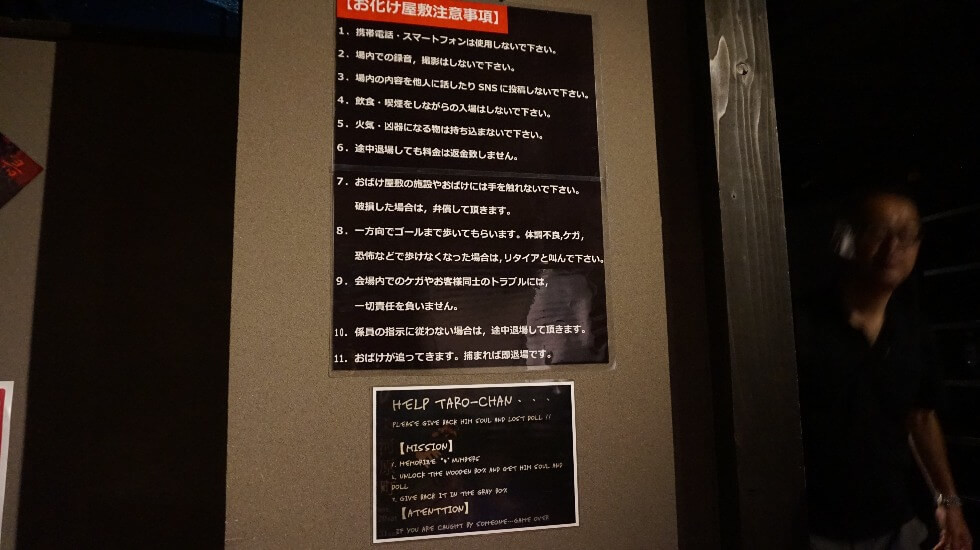 On the wall, there is also a list of rules and things to pay attention to in the haunted house.

Most importantly, be aware of the fact that both audio and video recordings and the use of cell phones are prohibited inside.

Also, if it’s too scary, and you’re unable to continue, it’s possible to leave part way through by yelling “Retire!” 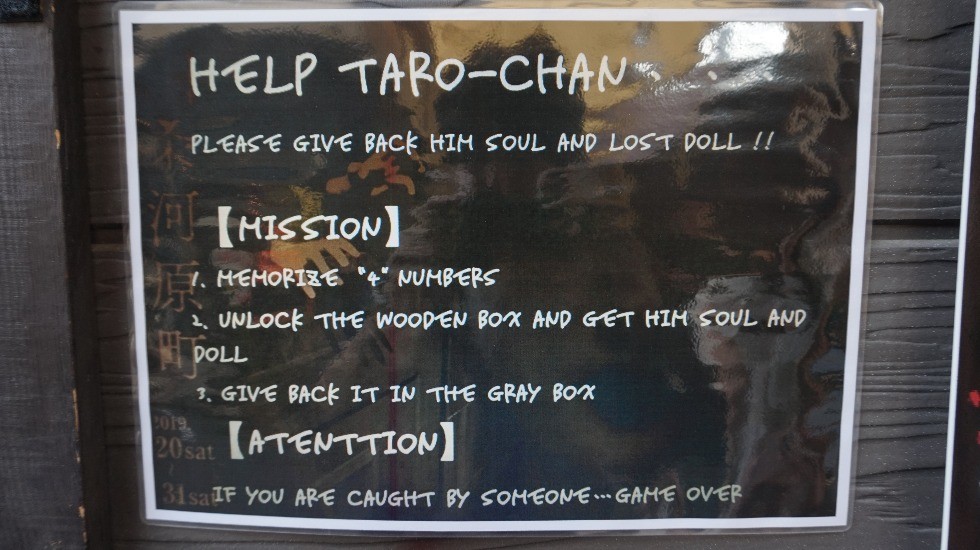 There is also a simple explanation written in English as well, which lets you know your mission for inside.

Make sure you don’t get caught by any of the monsters that try to come and get you, because it’ll be an instant game over! 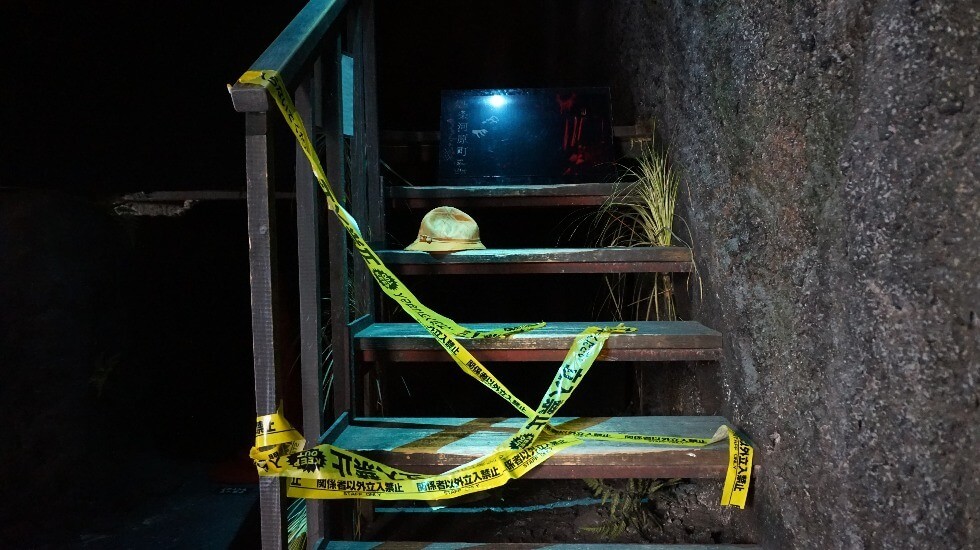 Finally, what everyone’s been waiting for, shots of the actual inside...

Which you’ll sadly have to go and see with your own eyes! 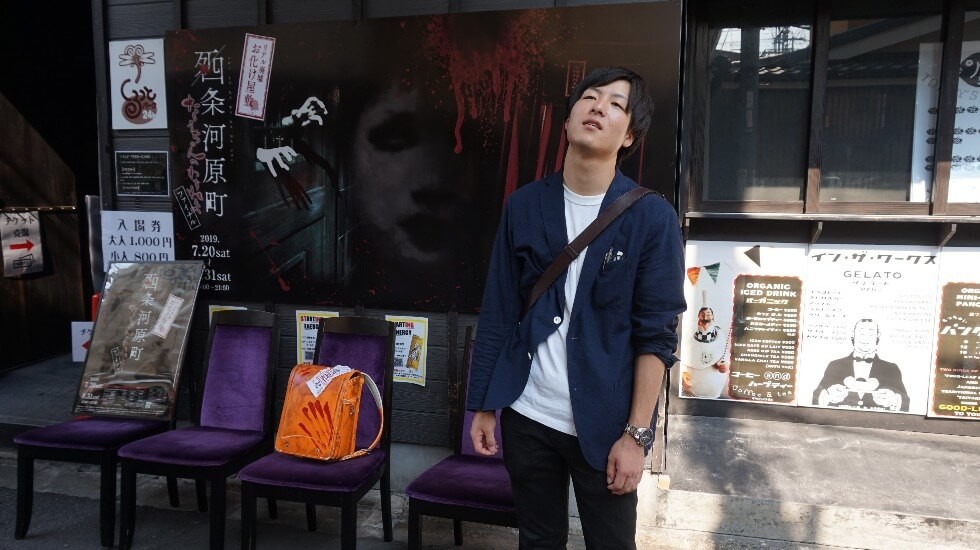 For anyone interested in how it was, this was me the moment we stepped foot outside. My soul had completely left my body, and I was still shaking in my boots from the monsters that chased me.

For anyone wanting to experience a Japanese haunted house, or just wanting to get out of the heat and have some fun, definitely check out Shijo Kawaramachi. 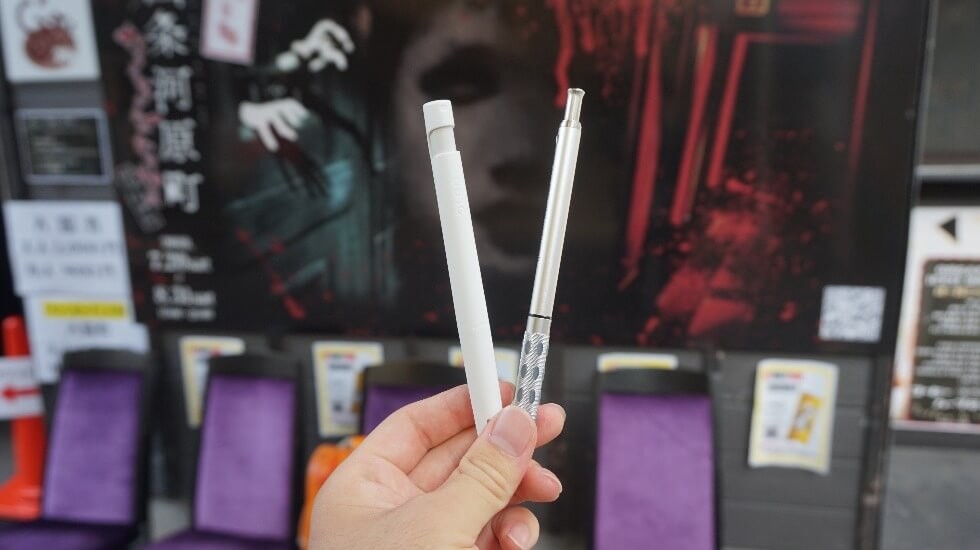 By the way, when I left the haunted house, a staff member stopped me and said: “Are these yours?”

When I looked, they were holding the pens that were in my jacket pocket. We went in to retrieve the lost boys missing things, and I ended up forgetting something myself.

I highly suggest before you head in, you put anything you might drop, like wallets and purses, into your bag!

I always had the image that haunted houses would only be scary, but looking back on it, I feel this one was more fun than scary. With the different tricks around the house and monsters that chase you, I had a really thrilling and great time. Shijo Kawaramachi will only be around until September 15, so go make your blood run cold while you still can!
Related keywords
All Things To Do Other Things to Do Central Kyoto Area
New Articles
2020 mysterious night illumination events in Kyoto in autumn!
All Kyoto Area
List of Canceled Events in Kyoto for May, June & July
All Kyoto Area
Up for some ice-cold beverages? Summers in Kyoto may be hot, but these five early-summer events are extremely refreshing!
All Kyoto Area
View All New Articles
Feature Articles
Kyoto Oden Guide 2019 – From Classics to the Unconventional
Kyoto's World Heritage Level Autumn Leaves – What’s Your Plans? 2019 Kyoto Autumn Feature
Share
×
Share
Share
Tweet