Pechakucha Night Kyoto is an event held in both Japanese and English that features ten speakers presenting their own unique visions, passions, and stories all around a decided theme.

The style of presentations is called Pechakucha, a format of 20 Slides each 20 Seconds long.

This word pechakucha, comes from the Japanese onomatopoeia for chit-chatting.

Pechakucha Night Kyoto is exactly that; presentations held over a short period of times and filled with unique expressions that convey the passionate messages of the speakers. The name also encompasses the fun back and forth that occurs between the audience and speakers after each presentation too.

Catch one of these events and enjoy a fun Japanese/English bilingual discussion!

What is Pechakucha Night Kyoto? 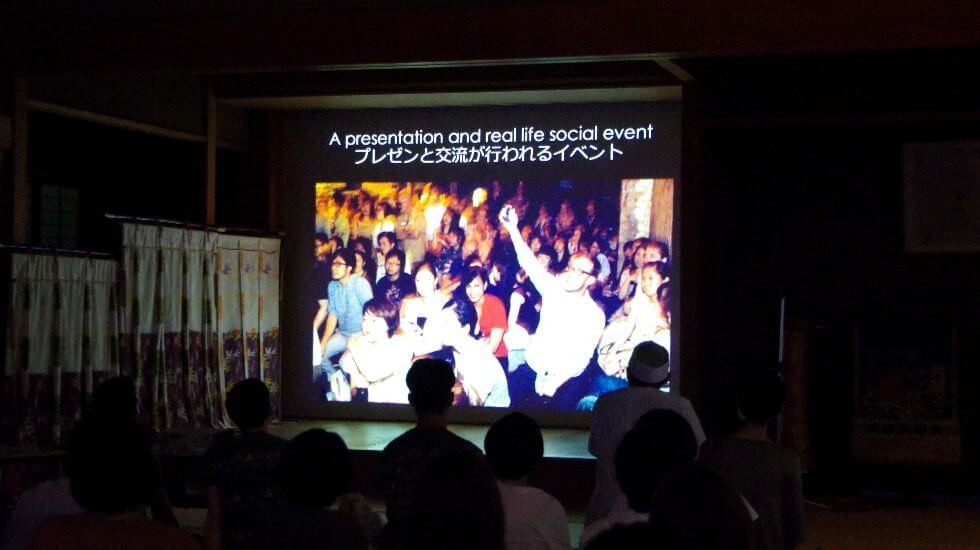 Usually, the events are held at Urbanguild, in downtown Kiyamachi, but with recent collaborations with different groups and events, the nights have been held at various locations, under various themes.

The theme for the night was “Town and Country.” Keeping with the theme, the event was held at Ōharano Shrine in Kyoto’s very own countryside area of Ōharano.

The Flow of Pechakucha Night Kyoto

Getting to the venue

The Pechakucha Night we attended was a unique edition of the event. First, we began making our way to the venue of Ōharano Shrine; a bumpy 30-minute bus ride from the JR Mukōmachi Station. The moment we stepped foot off the bus, we were taken aback by the sprawling greenery and beautifully clean air.

The scene of mountains with their peeks hiding amongst the clouds gave the area a magnificent ambiance. Even before the event had begun, we were already enjoying the appropriate theme of “Town and Country.”

While we were here, we also got to meet some friends you don’t see much in the city, scarecrows. 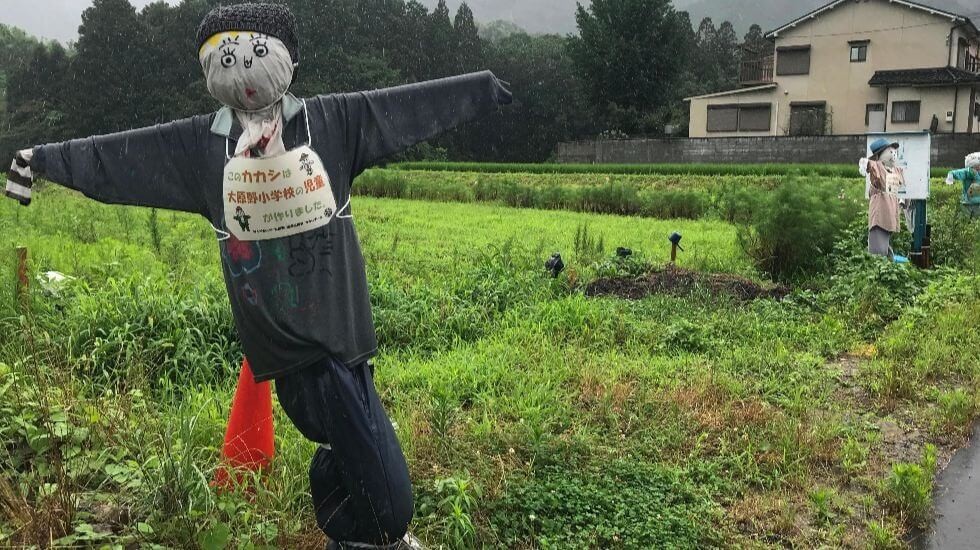 Firstly, a cheers to everyone who came!

After arriving at the venue, we began the night by enjoying a beer garden at the shrine-adjacent Kasugachaya. 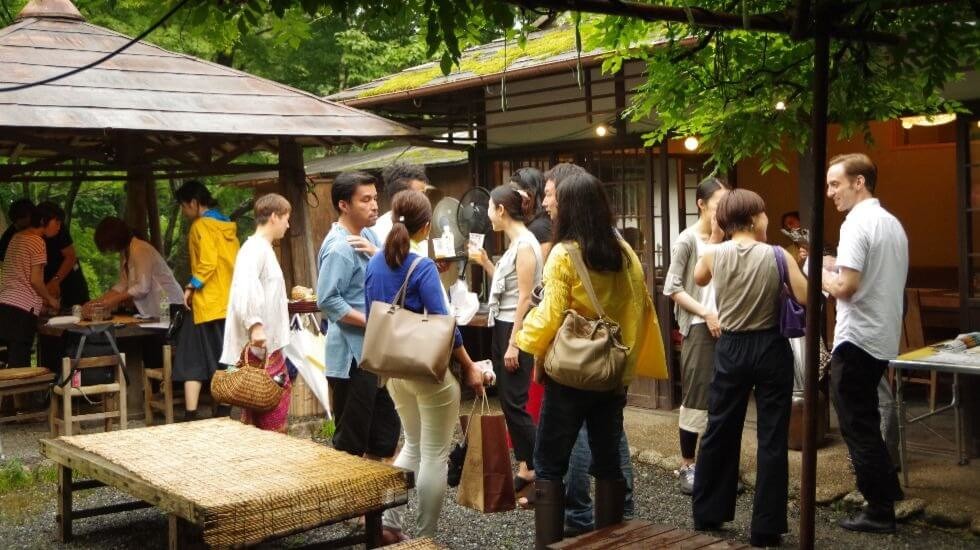 One of the highlights of these events are the exciting conversations you have with other participants over drinks before the presentations begin. Of course, soft drinks are also available, so those who don’t drink or wish to bring children can also feel free to participate too.

*Pechakucha Nights are usually held at venues with bars, so you’ll have to pay for any drink orders then and there. (Usually, admissions include 1 free drink)

On to the presentations 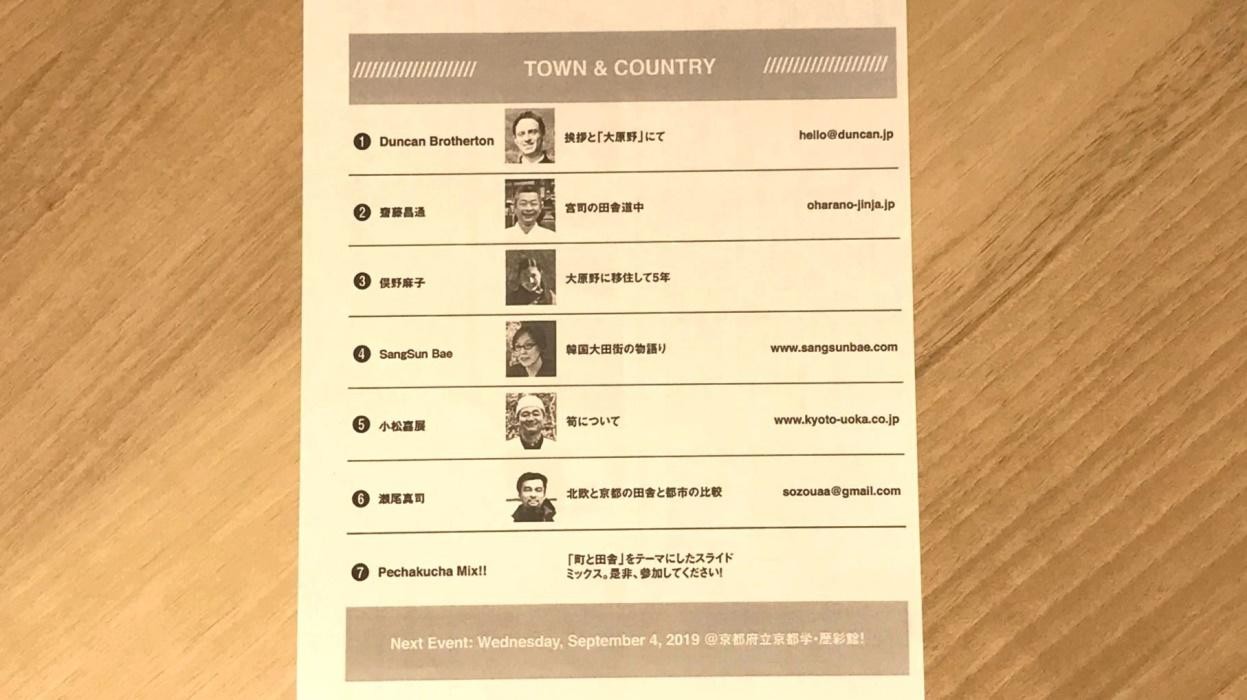 As everyone was enjoying their conversations and began settling into the venue, it was time for the presentations to begin.

This night was to feature six presenters; all of whom were from different backgrounds and occupations, and some even of different ethnicities. Usually, Pechakucha Nights are about half Japanese and half English, but as the audience at this night was largely Japanese, each presentation was held in Japanese.

Just looking at the program, we were getting excited.

In this blog, we decided to showcase two of the presentations we heard at the event.

The man pictured here is Saito Masamichi, the chief priest at the event’s venue of Ōharano Shrine. He traced back his roots and introduced us to a number of shrines, stretching from the Ōharano Shrine, to his home town of Fukui Prefecture.

He provided a high tempo presentation, filled with tidbits about shrines little known to even Japanese people. This wonderful presentation felt far and away shorter than 400 seconds. 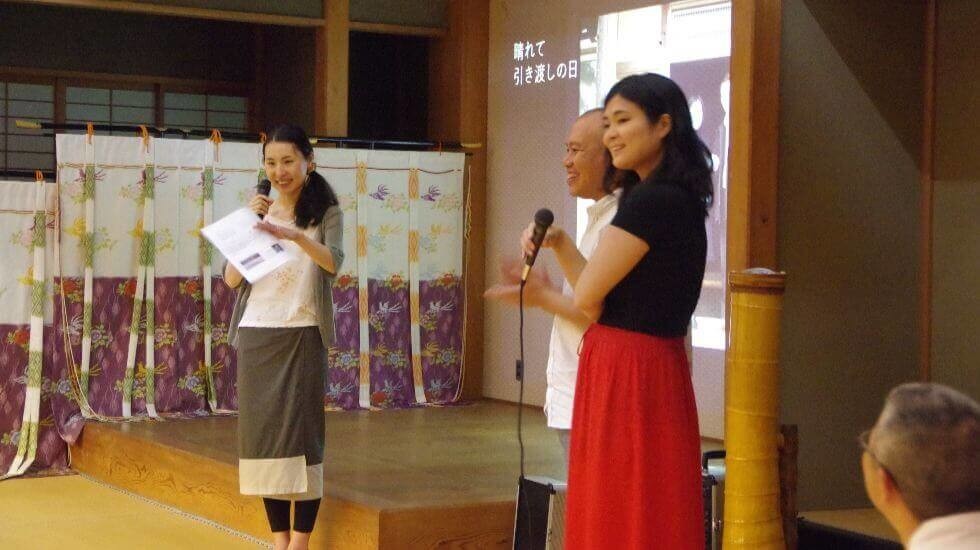 Following each presentation, a Q&A session is held. These sessions are also incredibly lively as the audience engages with the presenter, and a fun back is had in forth in both English and Japanese. 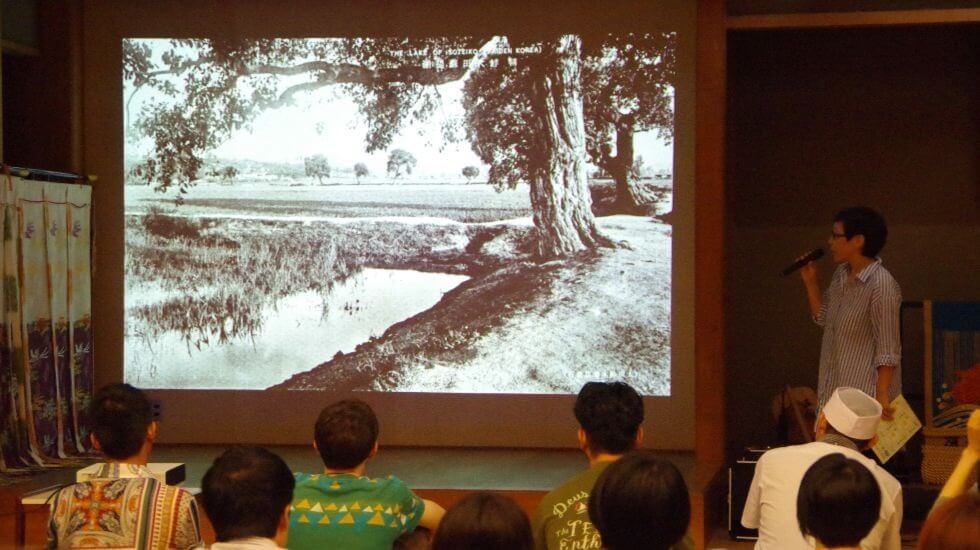 The second presenter we would like to showcase is the Ōharano based Korean artist, SangSun Bae. How did the town of Daejeon go from being part of the countryside to the sprawling city it is today? What was Japan’s role in all of this? Speaking on such topics, this presentation looked at the theme of town and country from the perspective of Japanese and South Korean history and was deeply impactful.

Of course, the following Q&A session was filled with laughs and smiles, and at one point even featured a guest appearance by SangSun’s child.

The ability to allow for discussion on such complex issues, without becoming too dark, is just one of Pechakucha Night’s many wonderful aspects. 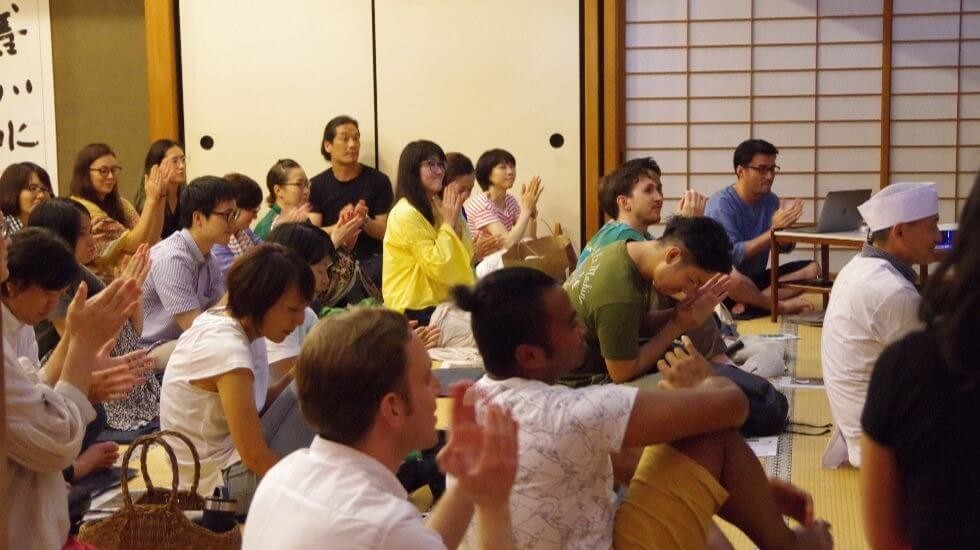 Just like that, all six presenters had finished. The unique and enthusiastic presentations really had us take a step back and marvel at how the simple theme of Town and Country could be looked at from so many varied points of view.

The event moved back to Kasugachaya, where everyone enjoyed the after-party over drinks and light refreshments. 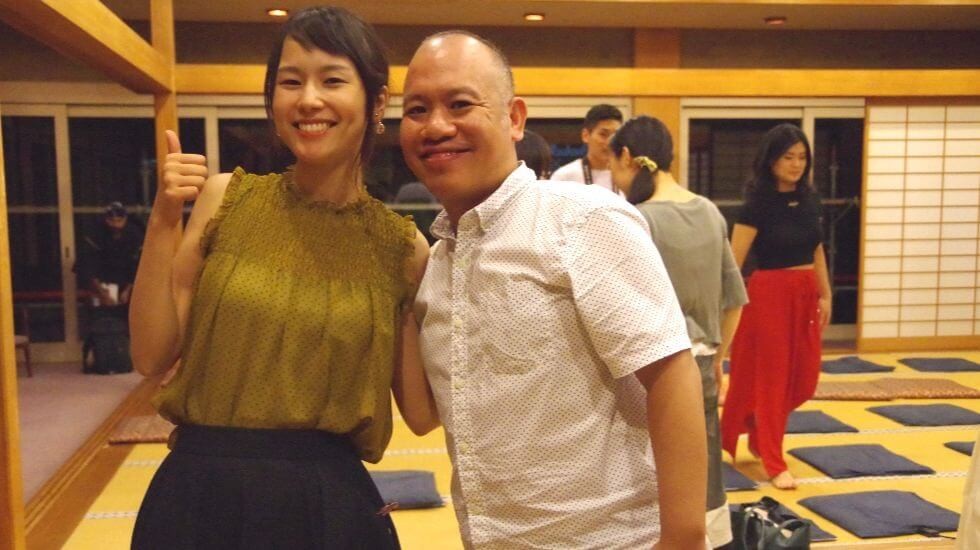 This was our experience at the Japanese/English, global event that is Pechakucha Night. With participants from both Kyoto and overseas, this event is sure to broaden your horizons and introduce you to something new.

If you’re ever in town during one the Pechakucha Nights, then we highly recommend checking it out!

I’ve gone to a number of Pachakucha Night Kyoto events, but they never fail to expand my worldview and always become a place to experience something fresh and new. These precious events have also taught me that no matter the topic, if it’s presented with enough passion and enthusiasm, anything can be a moving experience. Above all else, I recommend Pechakucha Nights simply because you don’t have to worry about language barriers! If your schedule lines up with one of the events, definitely check it out for yourself.
Related keywords
All Things To Do Other Things to Do Recommended Events All Kyoto Area
New Articles
Recommended autumn events in Kyoto!
All Kyoto Area
Kyoto’s Jidai Matsuri – Festival of the Ages
All Kyoto Area
Guide to Tackling the Arashiyama Kangetsu no Yube: Full Moon Viewing
Arashiyama & Sagano
View All New Articles
Recently Picked Up Articles
Three biggest festivals of Kyoto
Central Kyoto Area
718
The most interesting temple flea markets of Kyoto
Central Kyoto Area
632
Sharing Kyoto's recommended events in Arashiyama Area
Arashiyama & Sagano
15
Top 5 most popular events in Kyoto by Sharing Kyoto readers
All Kyoto Area
1
Feature Articles
Kyoto Oden Guide – From Classics to the Unconventional
Kyoto's World Heritage Level Autumn Leaves – What’s Your Plans? Kyoto Autumn Feature
Share
×
Share
Share
Tweet