The guide to one of Kyoto’s big three festivals, the Jidai Matsuri – Festival of the Ages.

Jidai Matsuri, or in English, the Festival of the Ages is one of Kyoto’s big three festivals.

Initially started as a celebration for the founding of the Heian Jingu Shrine and to mark the anniversary of Japan’s capital moving to Heian-kyō (modern-day Kyoto), the Jidai Matsuri is held every year on October 22nd.

Departing from the Kyoto Imperial Palace, the Jidai Matsuri parade makes its way through the streets of Karasuma-dori, Oike-dori, and Kawaramachi-dori, before heading down Sanjo-dori toward the street of Jingu-michi. Finally, the parade will reach its goal at the Heian Jingu Shrine. Nearly 2,000 people participate in the parade and walk, ride horses and carry others over 2 km.

Below we have included information about the festival, parade highlights, and some fun things to do on the day.

What is Jidai Matsuri – Festival of the Ages? 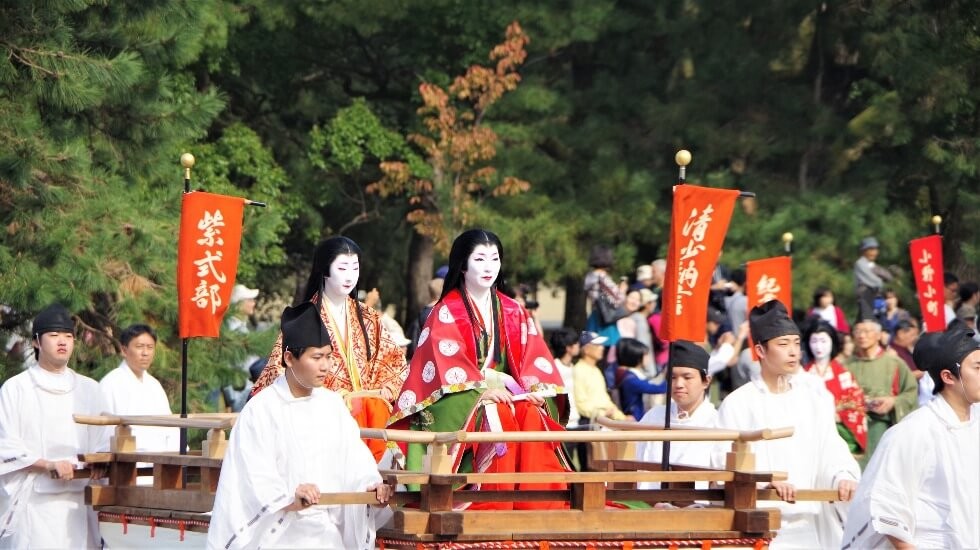 The Jidai Matsuri – Festival of the Ages began in the Meiji period as a festival to mark the anniversary of the capital of Japan moving to Heian-kyō (modern-day Kyoto) in 1100. The manners and customs of the Kyoto people stretching from the Heian period to when the capital was moved to Tokyo can be seen gathered side by side at this festival.

On the day of the festival, a parade of people donning period-appropriate outfits makes its way from the Kyoto Imperial Palace to the Heian Jingu Shrine. 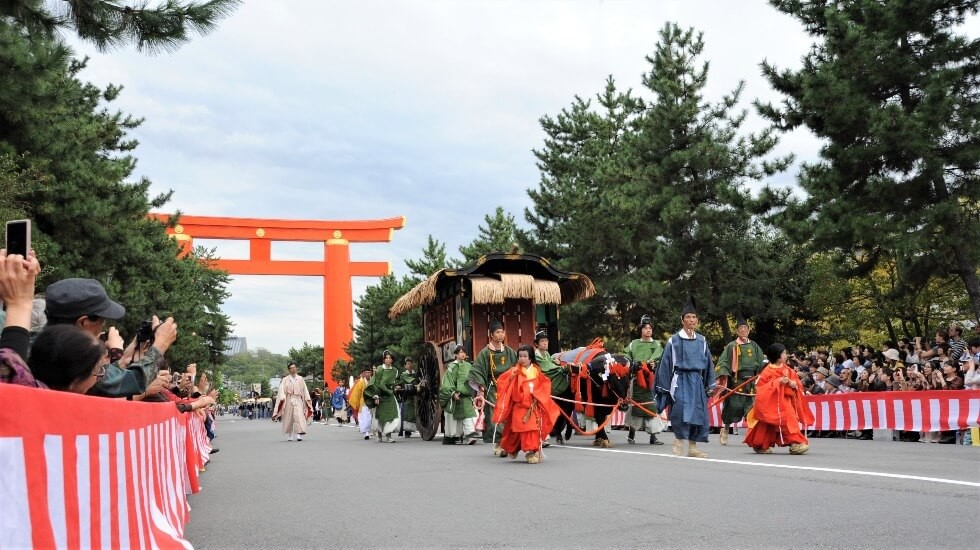 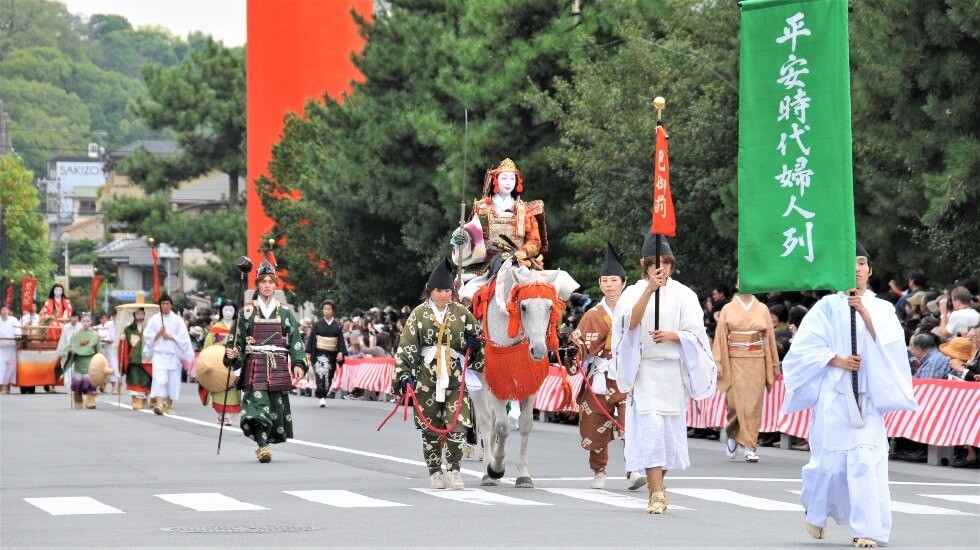 The aspect of the Jidai Matsuri parade that should be most closely paid attention to is the historical garments. Down to the materials and dyes used, each garment has been made to be as authentic and close to those warn at the time as possible. The garments were made using iconic Kyoto techniques such as hand-painted yuzen dyeing and gold brocade and are all worth a close look. 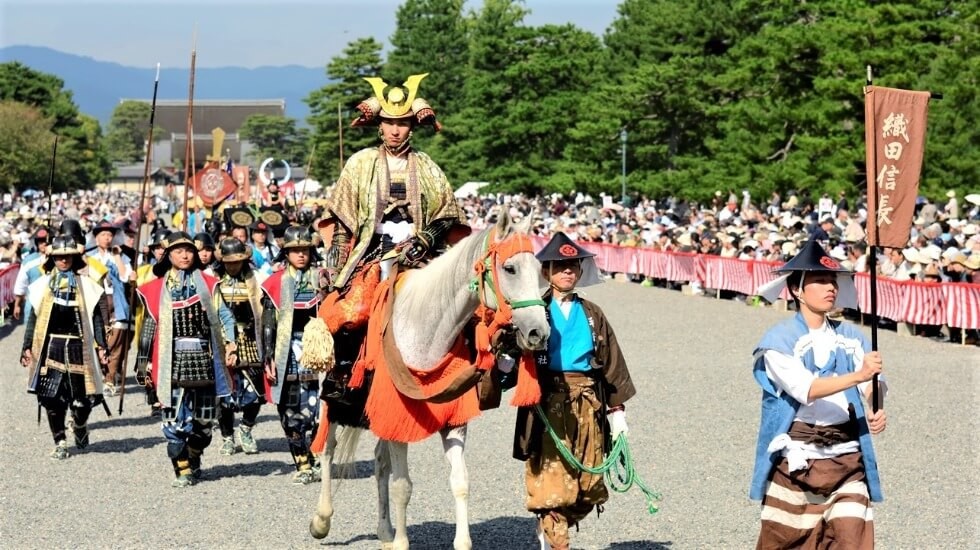 With historical figures such as Toyotomi Hideyoshi and Nobunaga Ieyasu on horseback, Sakamoto Ryoma on foot, and Murasaki Shikibu on a float, this festival is a history buff’s dream. The “ladies of the Edo period” who appear in the latter half of the parade are also very much worthy of a mention as well.

→ This area is the intersection of the streets Oike-dori and Kawaramachi-dori.

2. In front of the Heian Jingu Shrine and around the Jingu-michi area (around 14:20)

→ The roads here are narrow and provide a close look at the parade.

9 AM: Breakfast at Smart Coffee 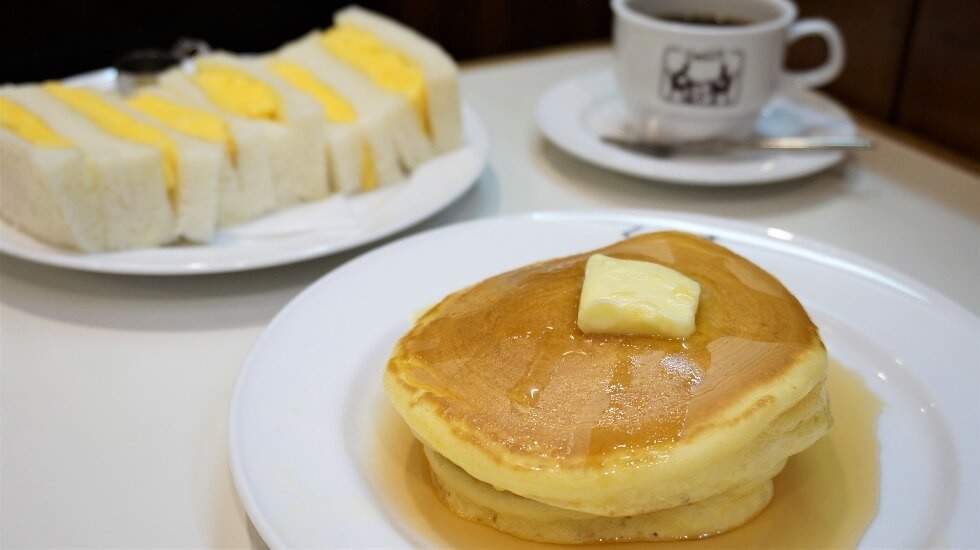 Smart Coffee is an old fashioned Japanese café (known as kissaten) and has multiple stores throughout Kyoto. Smart Coffee is loved by the locals, and there isn’t a person living in the city who hasn’t heard of them. With their in-house roasted original coffee and nostalgic American style pancakes, Smart Coffee cafes are frequented by not only Japanese locals, but many tourists from overseas as well.

11 AM: Wander through Teramachi Shopping Arcade 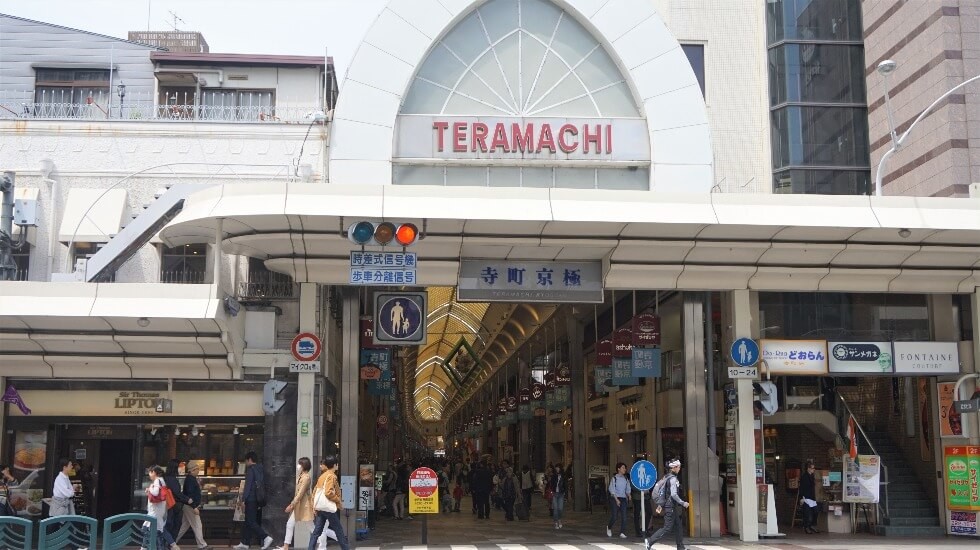 At Kyoto’s most popular shopping arcade, Teramachi, you will find everything from old-fashioned stores that have held there spot in the arcade for generations to modern and trendy stores. After grabbing a bite to eat for breakfast, we suggest taking a wander through this storied shopping arcade. 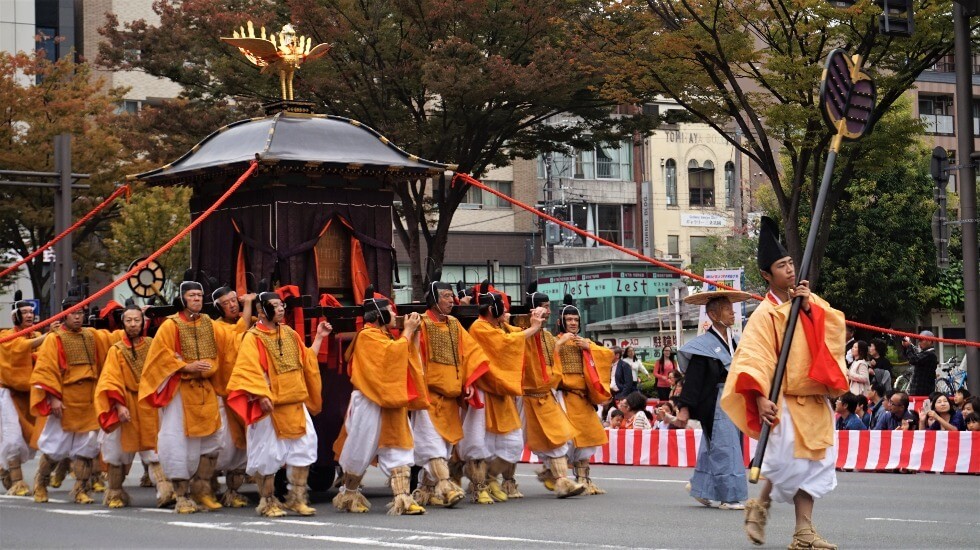 As the Jidai Matsuri parade passes through the intersection of Kawaramachi Oike at around 13:20, we suggest heading over there at around 12:30 to secure a good spot for yourself.

3 PM: Watch the end of the parade and explore the Heian Jingu Shrine area. 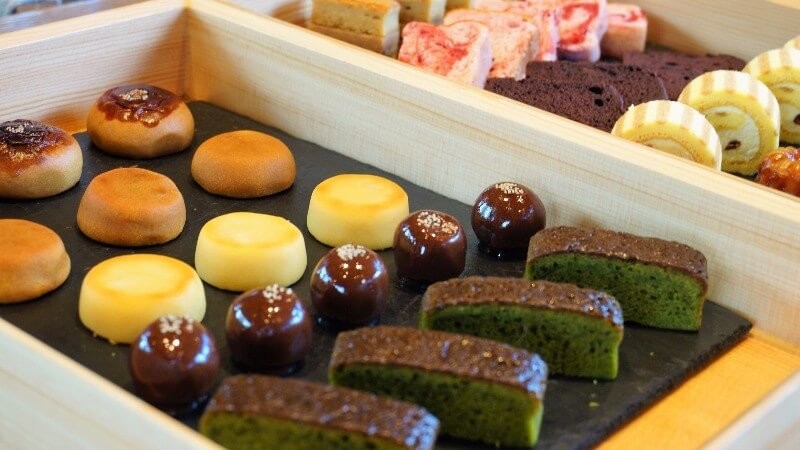 Kyoto Modern Terrace is a popular upmarket café restaurant serving delicious food and drinks. This restaurant also contains a bar so it’s excellent for those wanting to have a small drink with their lunch. 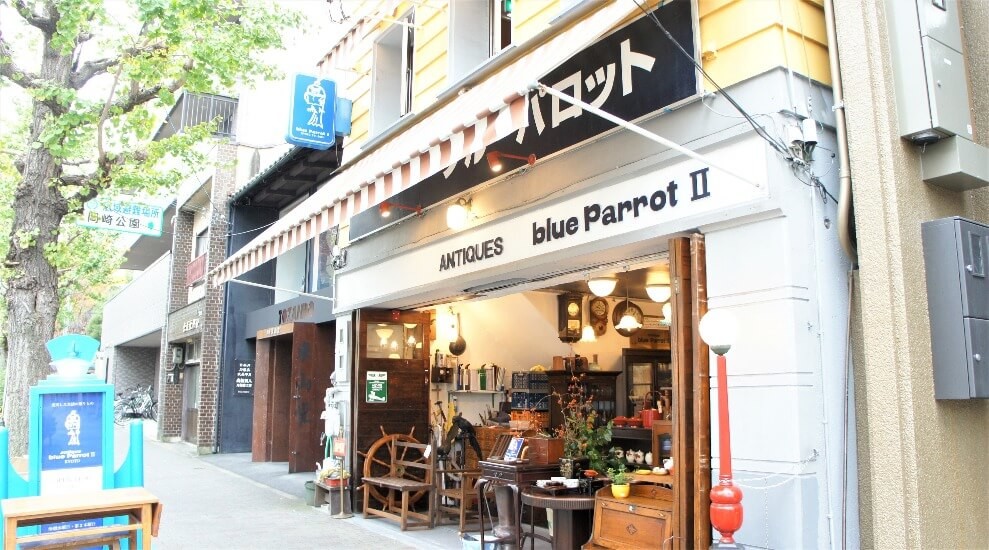 Antique blue Parrot is an antique store selling everything from western and Japanese style furniture, to plates, bowls, and just general miscellaneous goods. Antique blue Parrot has a ton of things to look through, so take your time and see if you can’t find something to take home. 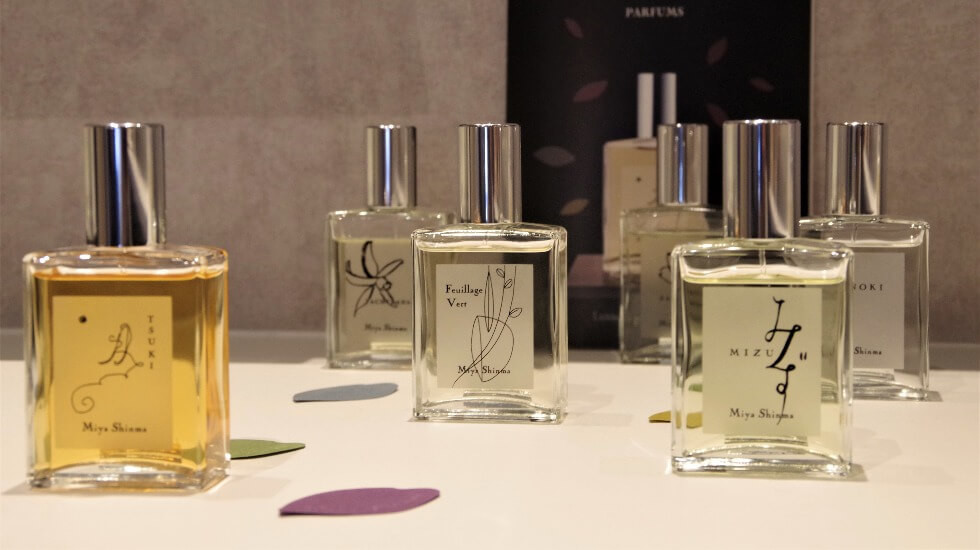 Fragrance specialist LE SILLAGE is not just any ordinary peddler of perfumes. LE SILLAGE provides in-depth information and knowledge about each and every one of their wide range of select perfumes. They are a fantastic place for lovers of all things fragrances.

Read More
Kyoto’s Jidai Matsuri – Festival of the Ages provides you with the opportunity to peer back in time and see the different ages and periods that lived in this ancient city. So for those who want to enjoy all Kyoto has to offer in a short time, then this is a definite must-see event. Also, if you find yourself with a bit of time either before or after the parade, then definitely check out some of the stores we showcased above.
Related keywords
All Things To Do Temples & Shrines Cultural Experience All Kyoto Area
New Articles
Recommended autumn events in Kyoto!
All Kyoto Area
Guide to Tackling the Arashiyama Kangetsu no Yube: Full Moon Viewing
Arashiyama & Sagano
The beginning summer in Kyoto is fun too! Traditional festivals of Kyoto in May
All Kyoto Area
View All New Articles
Feature Articles
Kyoto Oden Guide – From Classics to the Unconventional
Kyoto's World Heritage Level Autumn Leaves – What’s Your Plans? Kyoto Autumn Feature
Share
×
Share
Share
Tweet