From September 13th to 16th, the Japan Umeshu Festa in Kyoto 2019, a gathering of over 140 varieties of Japanese plum wine, better known as umeshu, from around the country, was held at the Kitano Tenmangu Shrine.

At the festival, we had the opportunity to enjoy everything from local Kyoto brewed umeshu to those with sake and brandy bases.

The following blog post is going to be all about those awesome wines and this incredible festival as a whole! 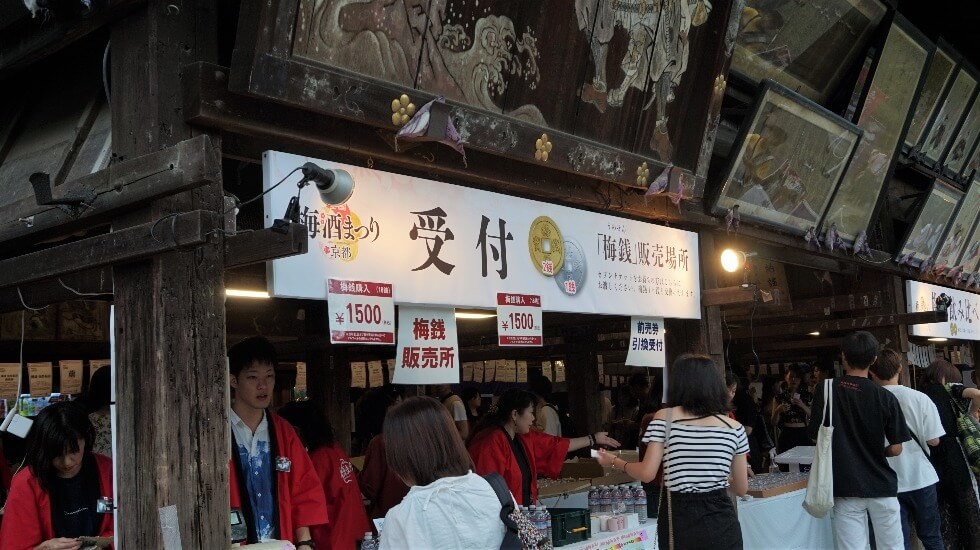 After heading through the Kitano Tenmangu Shrine’s gate, we found a reception desk to the left of us. There were plenty of other umeshu lovers about, so we quickly went to pick up one of the 1,500 yen tickets. 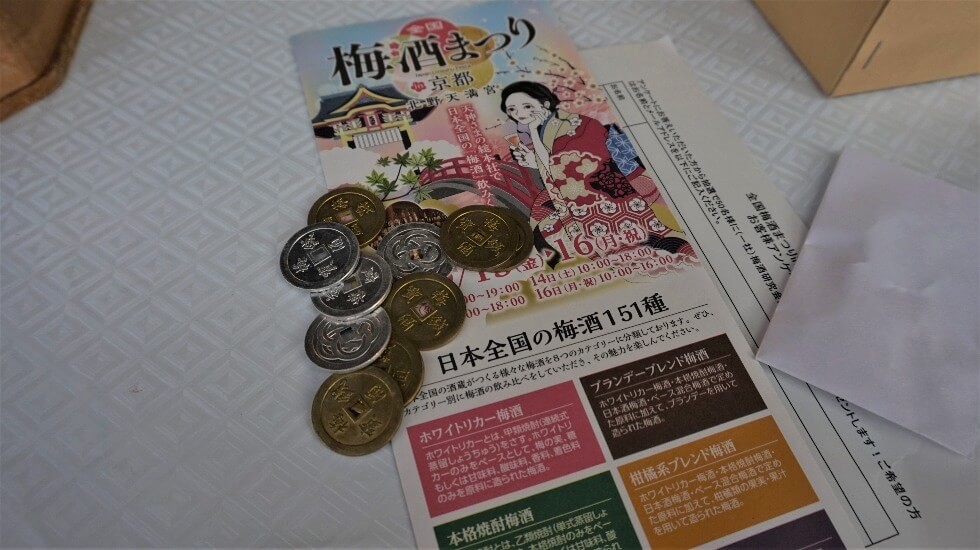 These were the entry tickets… or should I say, entry coins! How awesome! Already off to a great start!

These coins, appropriately named梅銭 (plum coins), are needed to pay for the drinks. 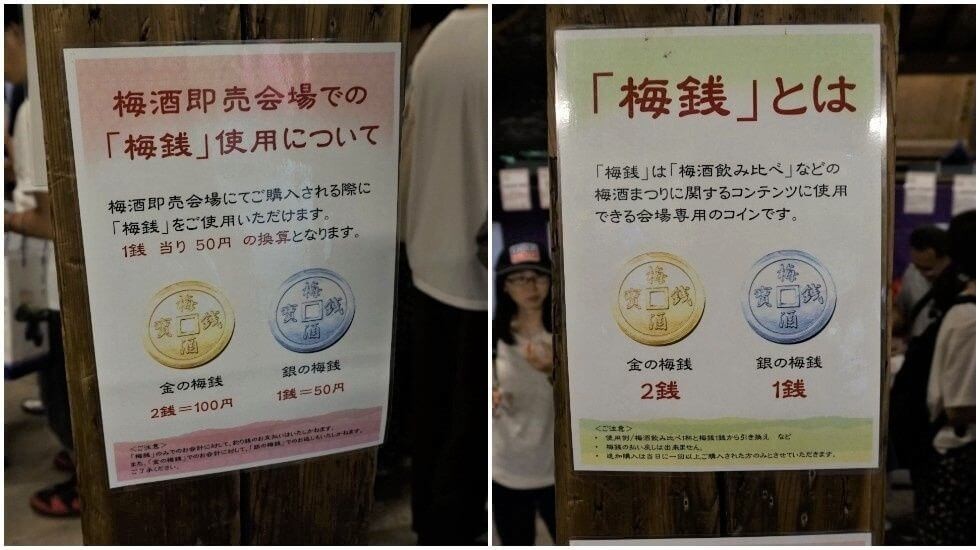 The gold coins are equal to 100 yen and two coins, while the silver ones are only 50 yen and 1 one coin. 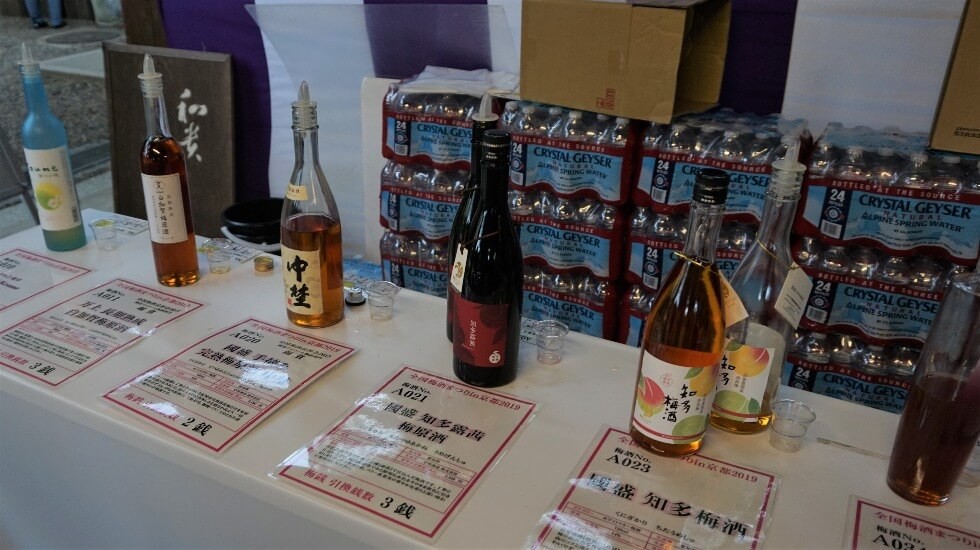 We quickly headed to the nearest tasting table!

With the overwhelming variety of choices, we were a little unsure what to try first.

Below the bottles were prices and small explanations. We recommend finding a flavor or brand that you like the look of and trying that first. 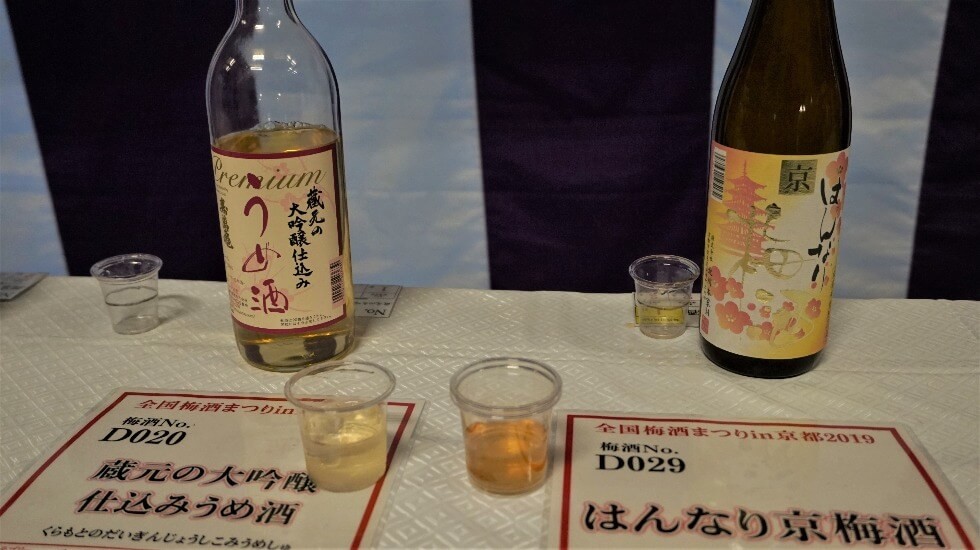 To start with, we went with these two brands of umeshu.

The left is a premium Daiginjo sake based umeshu. This gorgeous umeshu featured an incredible balance between the faint fermented aromas of the Daiginjo sake together with the lovely aroma of Japanese plums.

The right was a local Kyoto umeshu. This fragrant plum wine featured a sharp acidity.

This refreshing umeshu seemed like it would go down perfectly on a hot summer’s day.

This next one was made from plums steeped in Japanese sake. The characteristically well rounded and full-bodied flavors of this wine were pleasantly surprising! 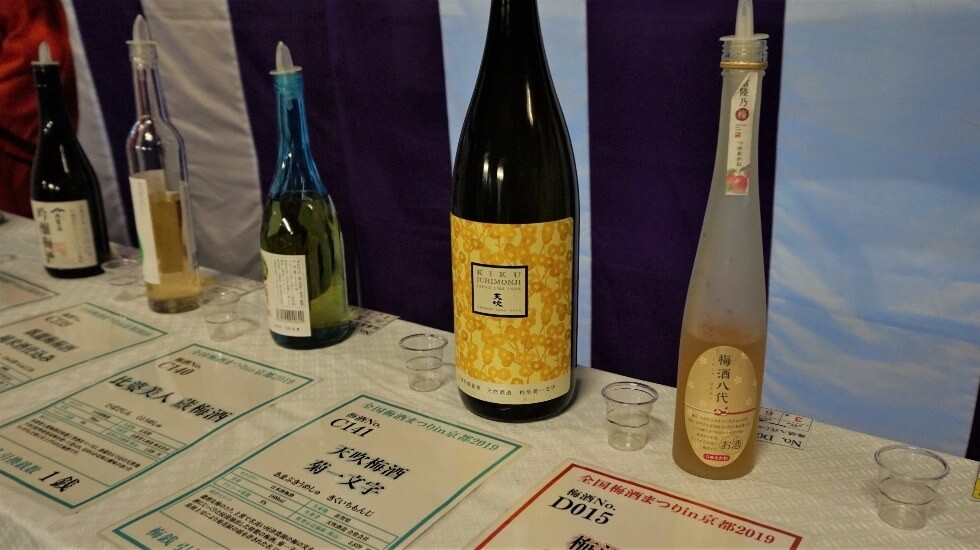 After much meandering over our last umeshu, we finally decided upon the right-most wine pictured above. It’s a little hard to see, but the wine itself was a beautiful shade of crimson. This wine had a markedly unique aroma and contained mellow sweet and sour flavors. 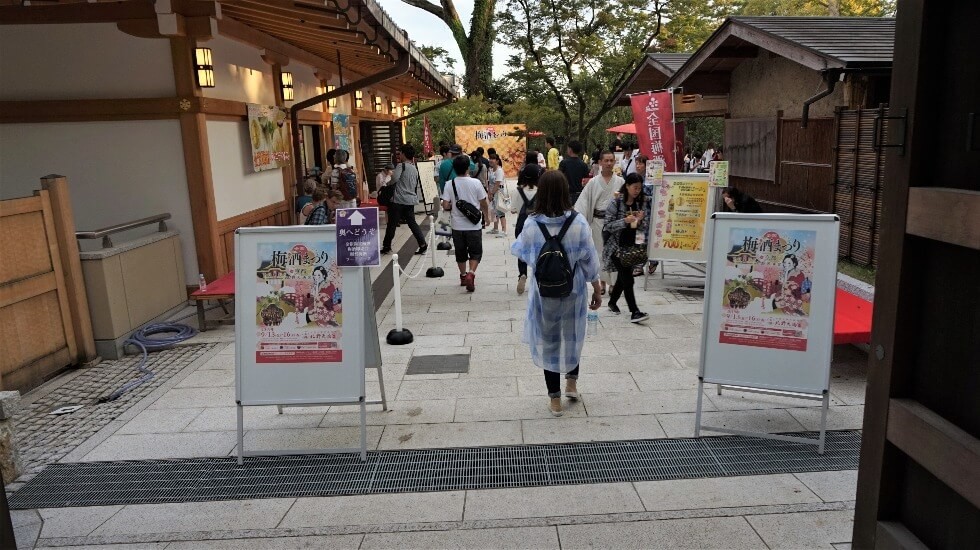 After trying a few different plum wines, we headed down this small path to the booths selling food! 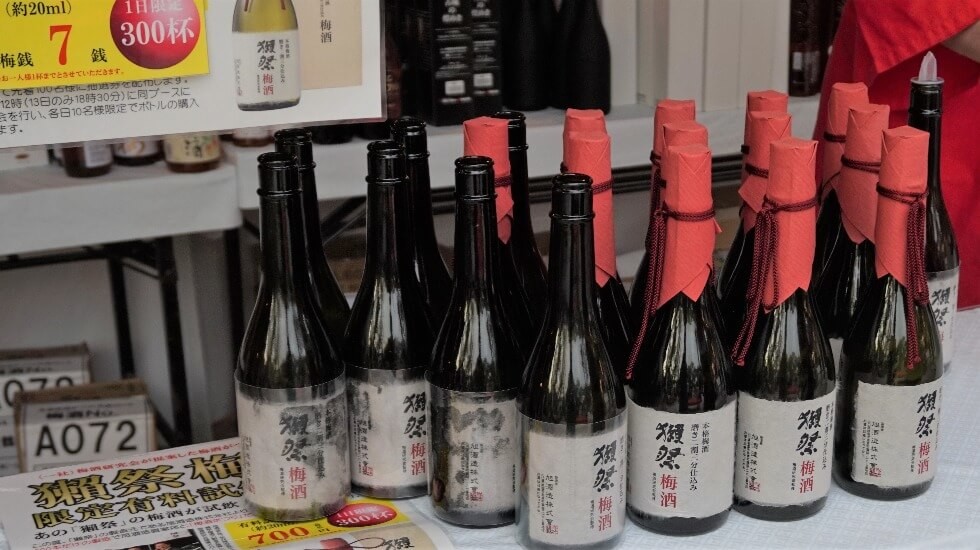 Sadly, it was only being sold in a limited quantity via a lottery system. 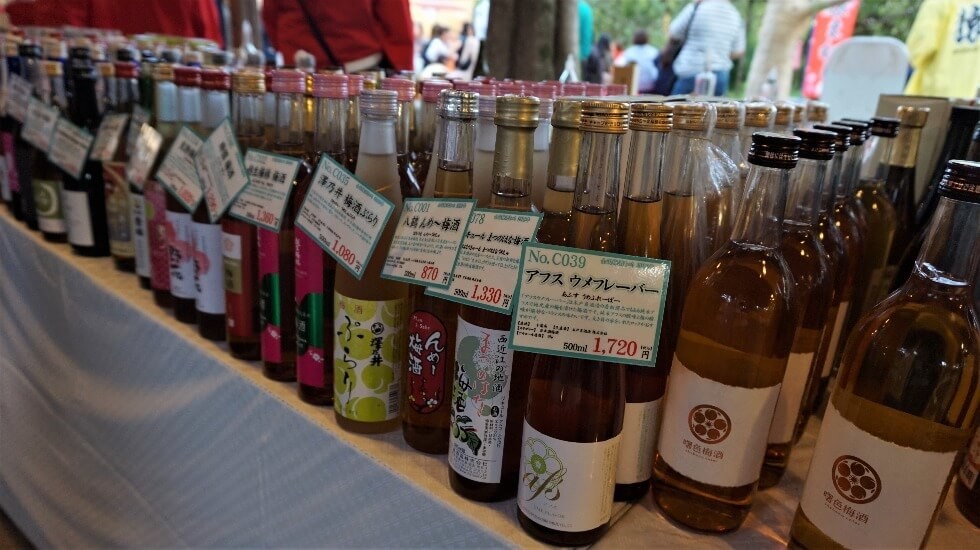 At Japan Umeshu Festa in Kyoto 2019, there were a ton of different unique and exciting plum wines to try. If you’re going next year, definitely make sure to pick up any of the umeshu that caught your eye.

I’m a huge fan of Japanese sake and this was my first ever umeshu event. There were a lot more people than I expected, but I had a great time chatting with everyone while we tried the different wines on offer. Also, as you can buy the umeshu that you like right there at the booth, I thought this festival was great for those looking to pick up umeshu to take home to friends and family, or just for themselves. I honestly can’t tell you how amazing a day it was!
Related keywords
All Things To Do Temples & Shrines Cultural Experience Nijo Castle & Kitano Tenmangu
New Articles
Information on the Gozan-no-Okuribi Festival in Kyoto in 2021
Downtown
Kyoto Bread Festival 2019 at Kamigamo Shrine
Shimogamo Shrine & Kitayama
Sharing Worlds with 20 Slides × 20 Seconds – Pechakucha Night Kyoto
All Kyoto Area
View All New Articles
Feature Articles
Kyoto Oden Guide 2019 – From Classics to the Unconventional
Kyoto's World Heritage Level Autumn Leaves – What’s Your Plans? 2019 Kyoto Autumn Feature
Share
×
Share
Share
Tweet