In this article, we look at the many Setsubun Festivals held throughout Kyoto in February!

February in Kyoto is all about setsubun!

The word Setsubun, which uses the characters for occasion and divide, refers to the day before the beginning of each season.

As the first setsubun of the New Year falls in February—the official start of spring in Japan—that's when the Setsubun Festivals are held.

One of the biggest events during the festivals is the Tsuina-shiki, an annual ceremony of both purification and welcoming of good fortune.

In this article, we'll be taking a deep dive into our most recommended Setsubun Festivals at Kyoto's various temples and shrines.

If you're in Kyoto during this time, then don't miss your opportunity to catch one of these festivals. 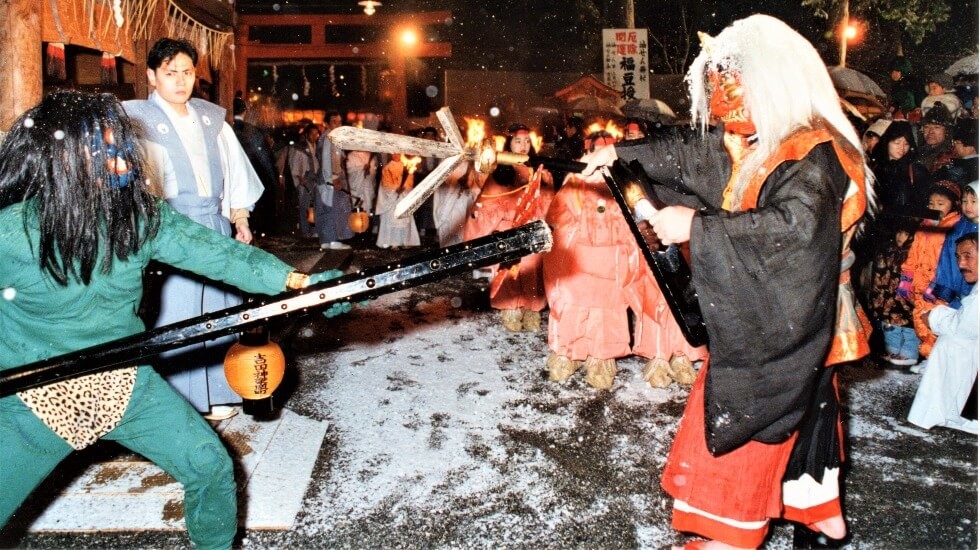 Yoshida Shrine's Setsubun Festival is one of the biggest in Kyoto.

The festival is characterized by two ceremonies, in particular; the Tsuina-shiki and Karo-sai.

The Tsuina-shiki ceremony is held at 6 p.m. on February 2.

During the ceremony, a god named Hososhi wields a massive spear and shield and lets out blood-curdling wails as he drives away red, blue and yellow oni.

As the oni walk the grounds of the shrine freely, visitors can get a chance to get up close and personal with them.

On the same day, the Ekijin Festival—a festival to pray for a year free of illness—will also held. 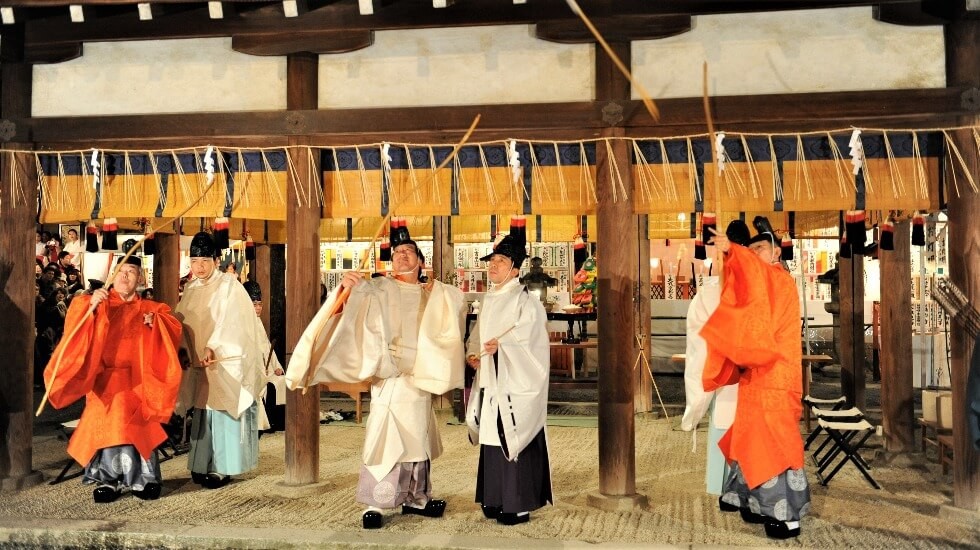 The ceremony, which features a giant bonfire in front of the Sanno Torii gate, involves visitors bringing their old shrine amulets to burn. This practice is thought to release the gods dwelling inside the old amulets and let them return home.

It's said that the fire denotes the coming of spring, brings good luck in the coming year and acts as a prayer against illness.

If you're bringing children, so please be careful as the fire can get quite hot. 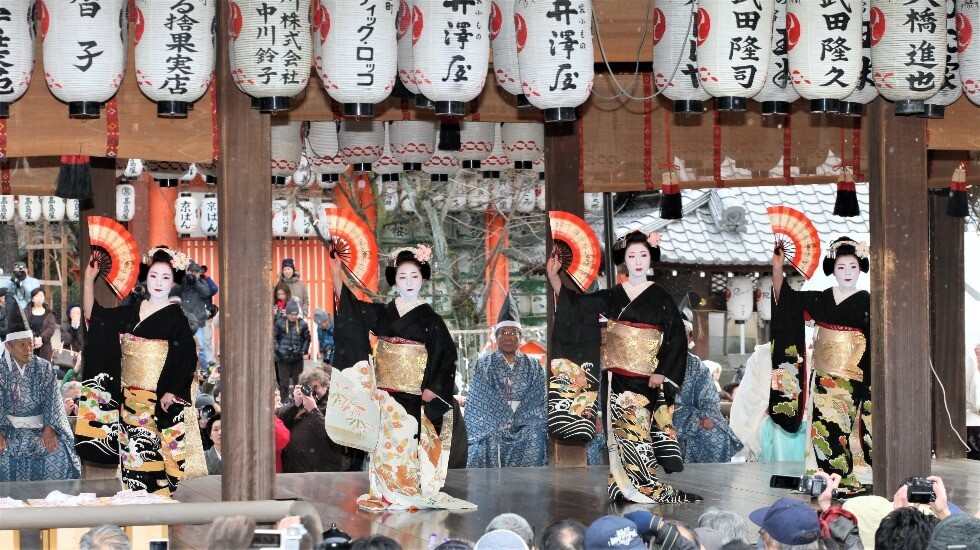 As the festival allows you to get an up-close look at Japan’s famous maiko, the Kyoto version of geisha, it's often packed with visitors from both Japan and overseas. 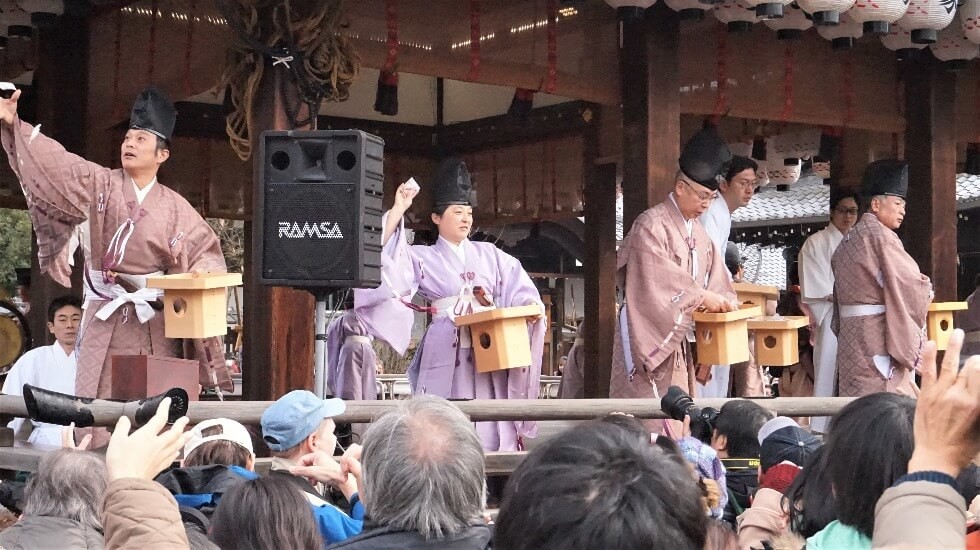 After the ceremonial dances, maiko, geiko and men and women born with that year's Chinese zodiac carry out the traditional bean throwing ceremony. This event is a favorite among people looking to snap photos and snag themselves some of the lucky beans.

During the Yasaka Shrine's Setsubun Festival, you can also purchase a bag of "lucky beans" that come with a lottery ticket.

This lottery ticket will give you the chance to win everything from bikes, expensive electronics, coupons for high-end Japanese restaurants and food to tissues and basic everyday essentials.

As you never know what you might get, see if you can't get one of these bags for yourself. 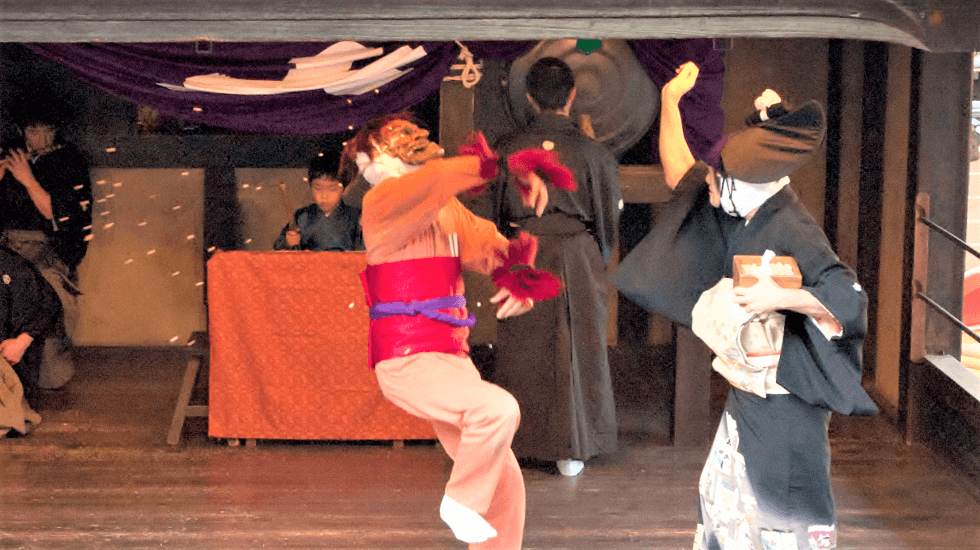 Famous for its connection to the Shinsengumi, Mibu-dera Temple holds its popular annual Setsubun Festival from the 2nd to 4th of February.

The highlight of this temple’s Setsubun Festival is the mibu dainenbutsu kyogen play, “Setsubun.” On both the 2nd and 3rd, this comedic traditional Japanese play about setsubun is held eight times throughout the day.

While admission is free, please note that photography is not allowed.

*The above photo was provided by the temple 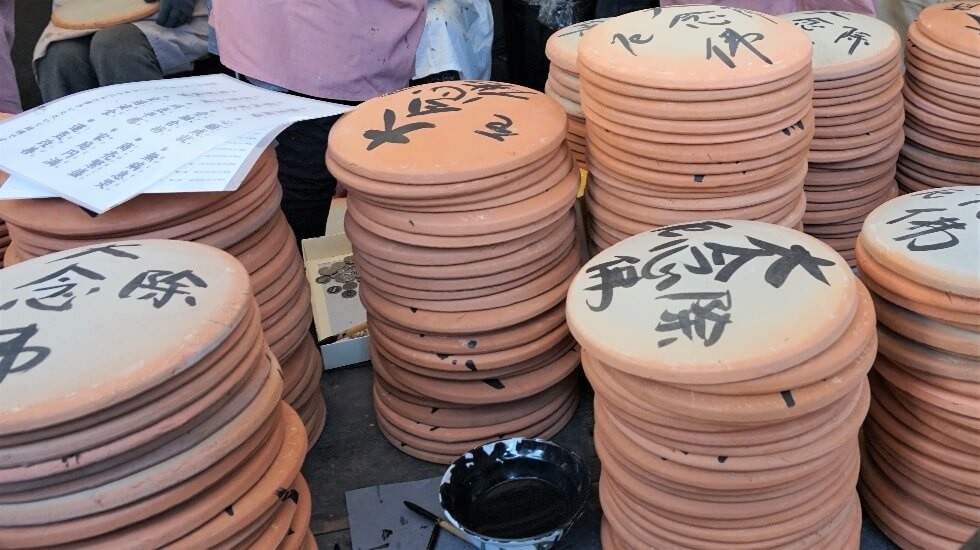 Another famous aspect of Mibu-dera Temple is its horaku unglazed pottery, which is used as a good luck charm to ward off evil. On the back of the plates are the characters "厄除け" (yaku-yoke) and "大念仏" (dainenbutsu), meaning "protection against misfortune" and "loudly reciting 'Amithaba.'" On the front, you write your name in ink.

These plates appear in the spring version of the mibu kyogen play, where they are smashed in what's known as the horaku wari. This act of smashing the plates is thought to bring out their powers of good luck and protection against evil.

If you can, why not get a plate with your name on it, have someone smash it and receive some good luck. 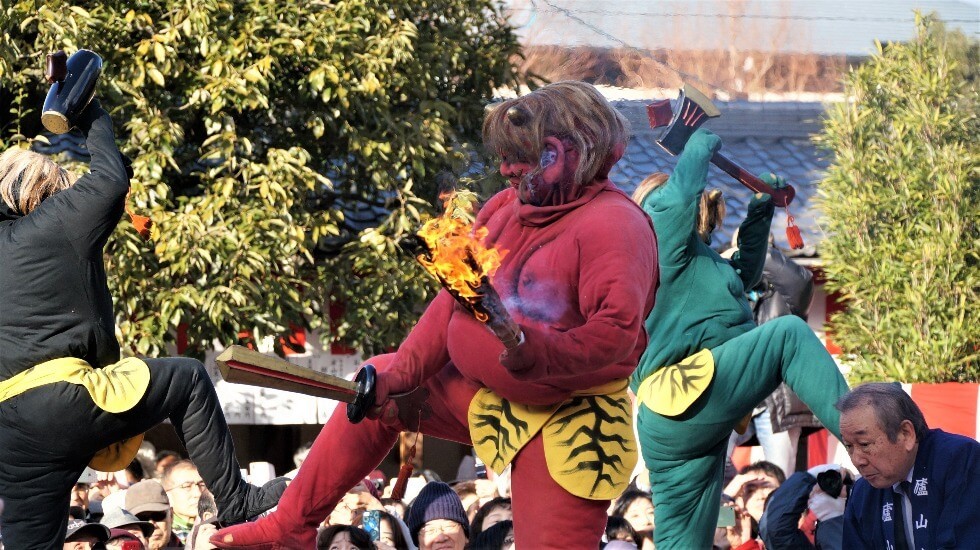 Rozan-ji Temple's Setsubun Festival is known for its "tsuina oni horaku" or how it's more commonly known, "the dancing oni." The three colored oni who appear in the event represent the Buddhist idea of Klesha, with the red oni expressing ignorance, the green, attachment, and black, aversion.

From 2:15 p.m., a ceremony called Oni-no-okaji is also held. This ceremony is said to make places where you're unwell better through the purging the aforementioned demons. 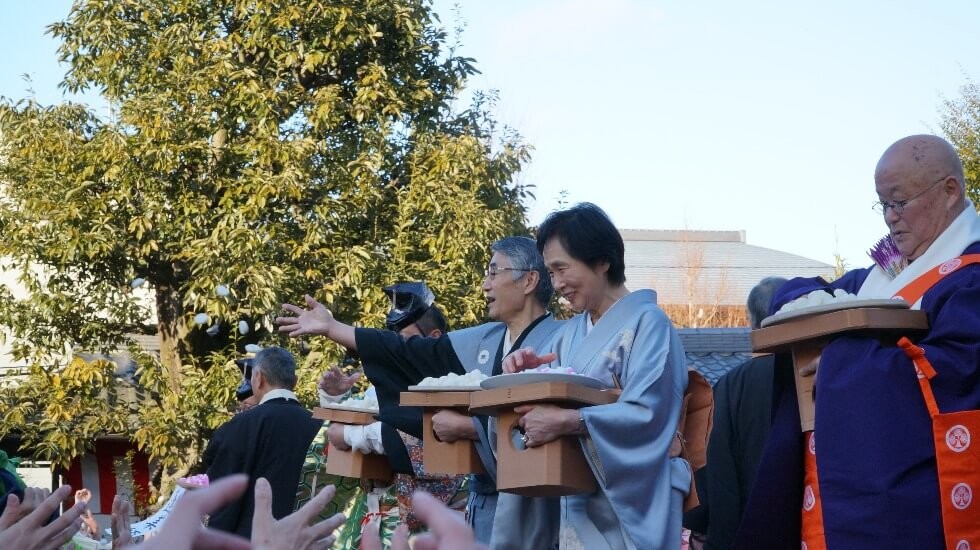 After the oni have been scared away, members of the temple begin the bean throwing ceremony. If you manage to get your hands on one of the beans, you will be allowed to purchase more at the award station.

If you're so inclined, take the beans home and enjoy them with family or friends while praying for a happy and healthy year.

Read More
Setsubun Festivals are held all over Kyoto, but each one is unique. These festivals are only held in February, so if you're in town, then definitely don't miss your chance to see one for yourself!
Related keywords
All Things To Do Temples & Shrines Cultural Experience All Kyoto Area
New Articles
Mysterious night illumination events in Kyoto in autumn!
All Kyoto Area
Recommended autumn events in Kyoto!
All Kyoto Area
Kyoto’s Jidai Matsuri – Festival of the Ages
All Kyoto Area
View All New Articles
Feature Articles
Kyoto Oden Guide – From Classics to the Unconventional
Kyoto's World Heritage Level Autumn Leaves – What’s Your Plans? Kyoto Autumn Feature
Share
×
Share
Share
Tweet