Pilgrimage to the three otaku havens of Kansai

This is a pilgrimage to the heartlands of otaku in Kansai: to Nipponbashi in Osaka, Teramachi in Kyoto, and San Center Plaza in Kobe.

There are three main spots for the manga and anime fans in Kansai: the most famous one, Nipponbashi in Osaka; the interesting San Center Plaza in Kobe; and of course Teramachi in the middle of Kyoto.

This time we are going to go to all three of them and see which one is the best place for what type of otaku coming to Kansai. 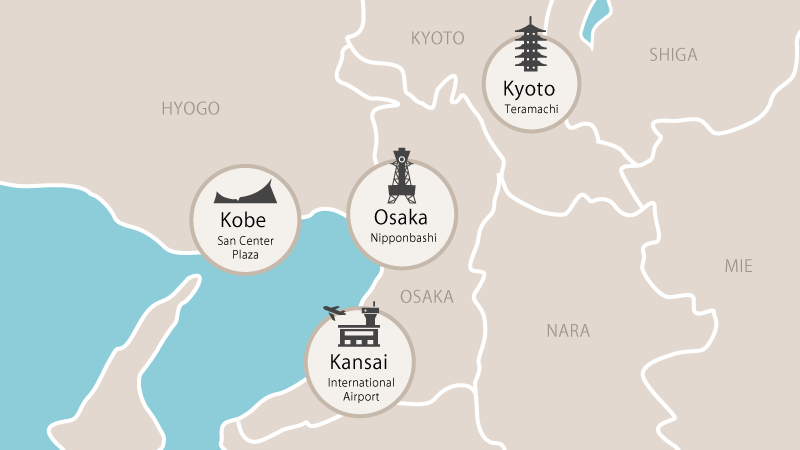 Kyoto may not be that famous for otaku activity, but there is a connection between traditions and anime in this ancient capital. You may have heard of Kyoto Animation, the famous anime studio hailing from this city, which has produced such famous anime as The Melancholy of Suzumiya Haruhi and K-on! And in the center of Kyoto in Teramachi, you can find many stores selling anime goods and try your hand at UFO catchers. 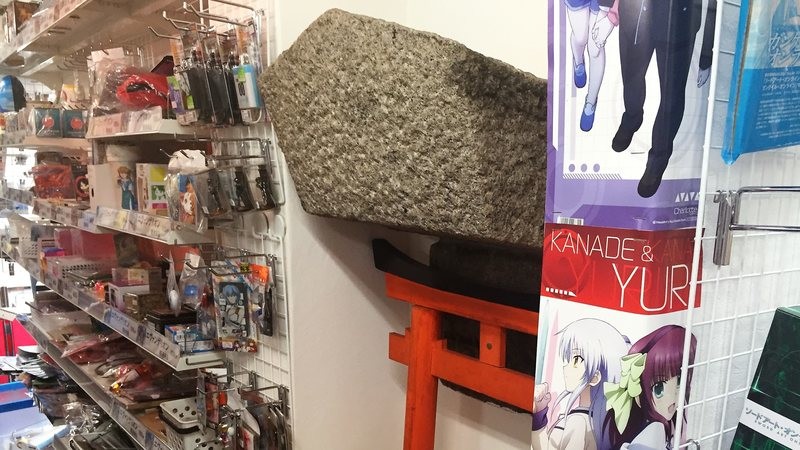 If you go to Nishiki Tenmangu Shrine, you get to see the torii gate, the top of which actually goes inside the neighboring buildings. And one of these buildings houses a shop selling anime merchandise, and for cheap, so it’s a nice place to get souvenirs at, and to look at the torii gate.

You can’t forget about Manga Museum, the main attraction for otaku in Kyoto. On the yard of the former elementary school you can relax and read manga, and inside you can learn about the history of these Japanese comics. 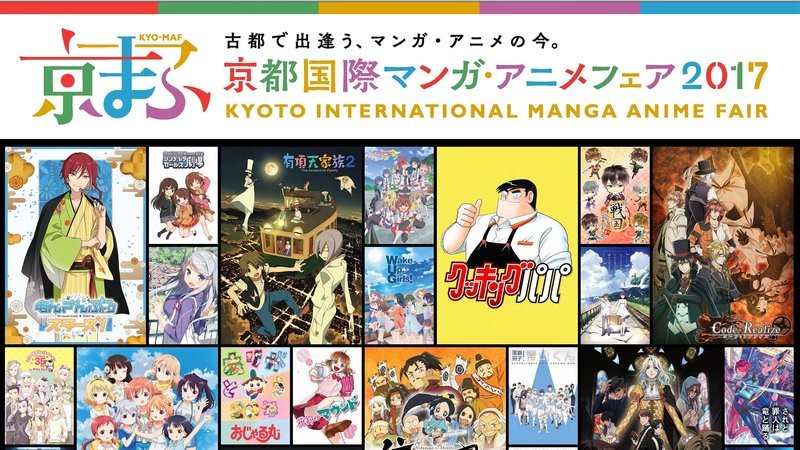 Kyoto International Manga Anime Fair, also known as Kyomaf, is the biggest anime event in Kyoto. This event gives you a chance to get to know more about the latest anime, but you, of course, also get to see some incredibly real cosplay too. 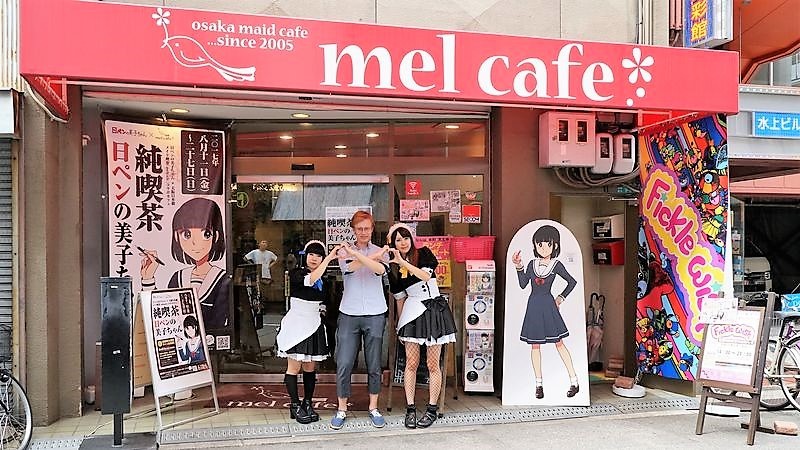 When you go to Osaka, the place you probably think of first is Nipponbashi when it comes to things having to do with manga and anime. This is a place where cosplay meets everyday life, and you can find something you like no matter what type of otaku you are. Of course, there are many maid cafes too, and Mel Café which you can see above is an especially nice one. 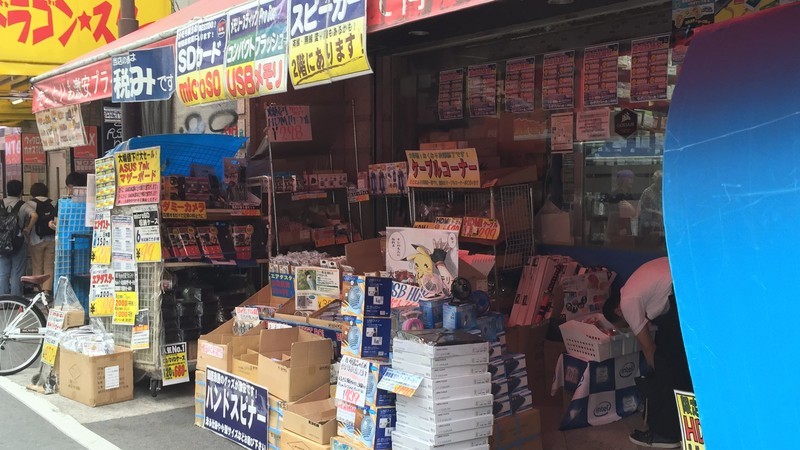 There is really a lot to see here, but before the area also known as Denden Town was known as the otaku haven it’s now, it was known for the many electronics shop around the area. Even now the place is great if you need to find a new motherboard for your computer.

When talking about anime, the talk often gets to Gundam and when in Nipponbashi, Gundam is hard to miss. This giant Gundam marks the entrance to Joshin’s Character Store. 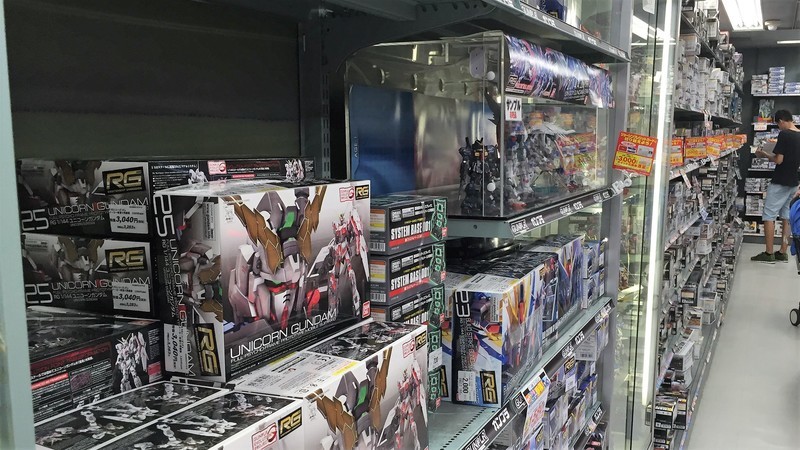 The Joshin Character Store has a whole story devoted only to Gundam and especially to Gundam models, or Gunpla. They have all kinds of models ranging from small mechs costing a few hundred yen to huge ones with prices around 20,000 yen. 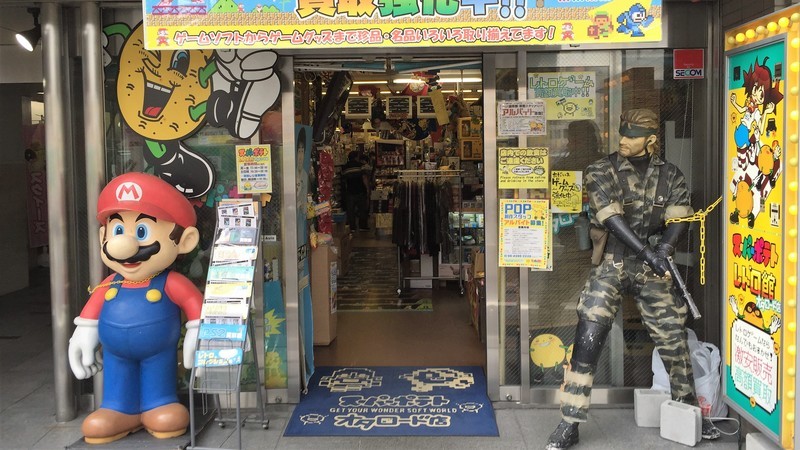 Since at Joshin they sell all types of Gundams, from new to old, some of you may get nostalgic. If you get nostalgic, Super Potato is the place to go to. This store sells all kinds of old games, from the Nintendo Entertainment System to Sega Dreamcast, and they have a great selection of even the rarest of games and consoles.

Another interesting place to visit is the Joshin Super Kids Land, a whole department store of toys and anime merchandise. If you have something you want, chances are they have it at this store. 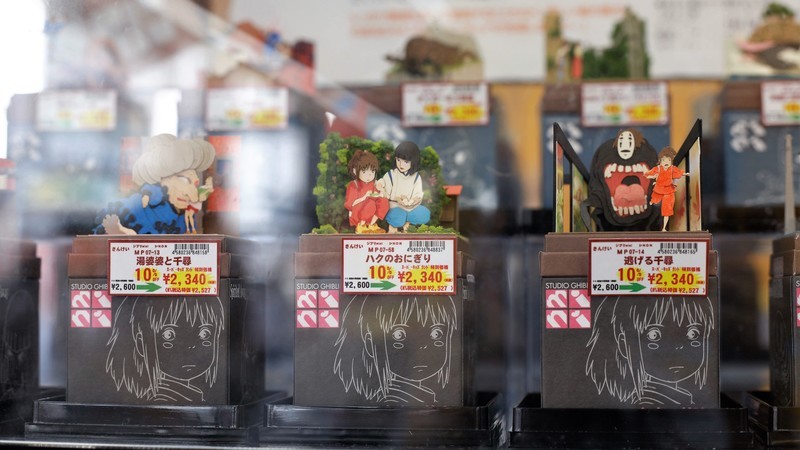 Especially worth a note are these Ghibli paper-cut-outs, which give look surprisingly three dimensional when you get to see them close. But maybe the best thing about this store is that they really sell all kinds of things, so while they also sell Gunpla, you can also get Love Live! figurines and Totoro plushies. 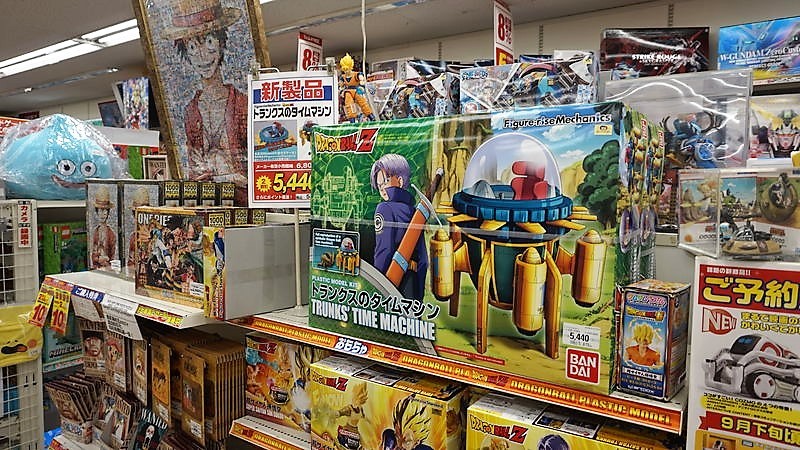 For those still feeling a bit nostalgic after all of this, you can of course get some Dragon Ball models too, like this rather big Trunks’ Time Machine. Ka-me-ha-me-ha!

On the second floor you can find exquisitely made wooden models of Japanese temples and castles. It is truly astounding to think how much time and effort it would take to make the biggest castles, and the castles and temple pagodas they have on display at Joshin can be said to be works of art. 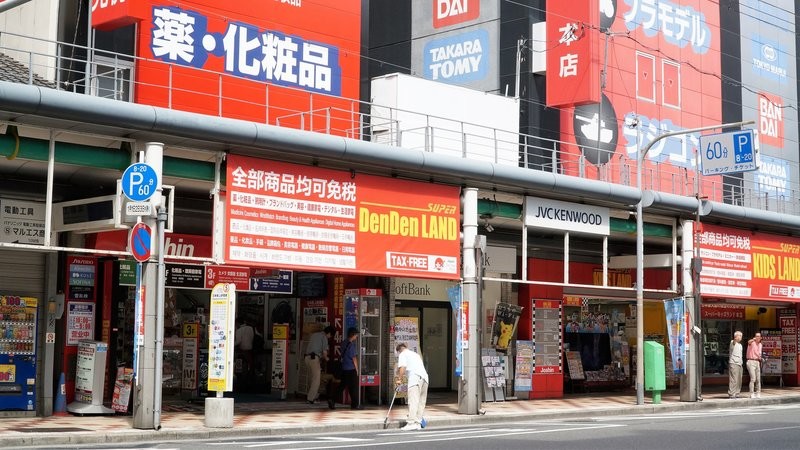 Right next to Super Kids Land, there is Super Denden Land, where they sell all kinds of useful items from make-up and hair dryers to high-tech toilet seats. 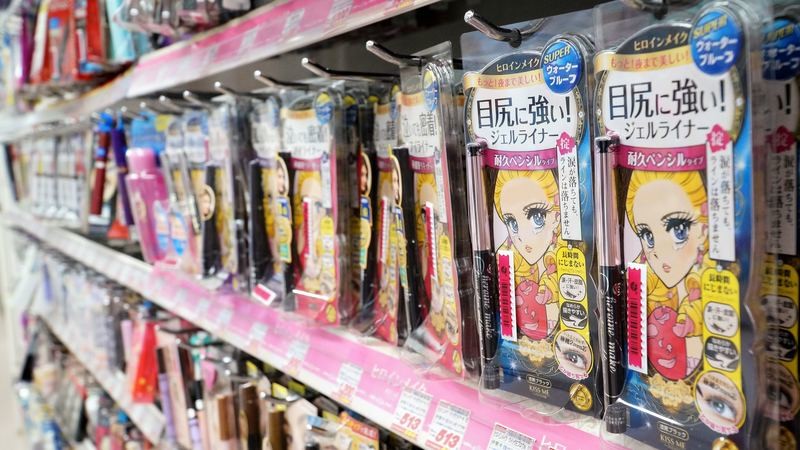 Even make-up in Japan has anime characters on it, as you can see from these eyeliners marketed with characters resembling those appearing in the Rose of Versailles. You can find these anime-inspired cosmetic products on the first floor. 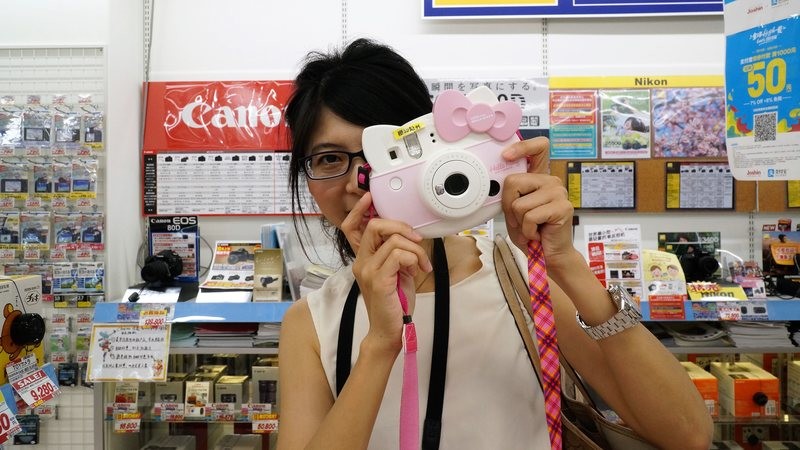 You could of course get yourself a cute Hello Kitty Instax camera, but the Hello Kitty choices don’t end here. 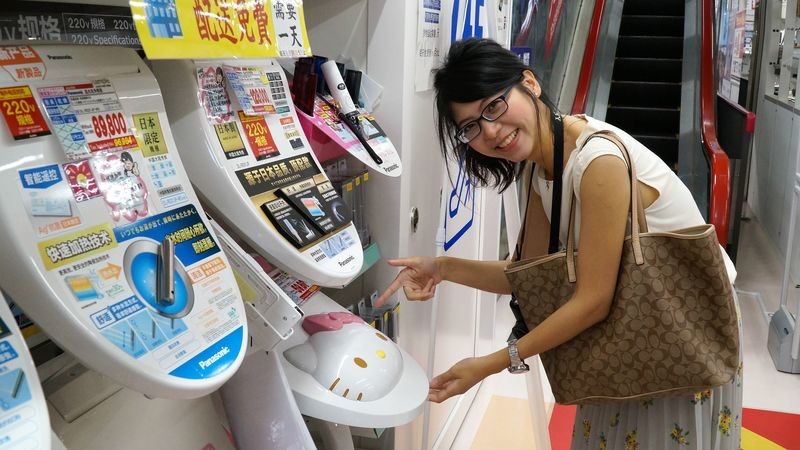 How about a Hello Kitty toilet seat with a bidet and many other functions? They have toilet seats, or “washlets,” that work with 220V AC voltage too, so you can rest assured you can use this Hello Kitty seat wherever you live in. Not only can you buy these items tax-free, we at Sharing Kyoto also have a coupon for you, which you can get to by clicking on the link below: 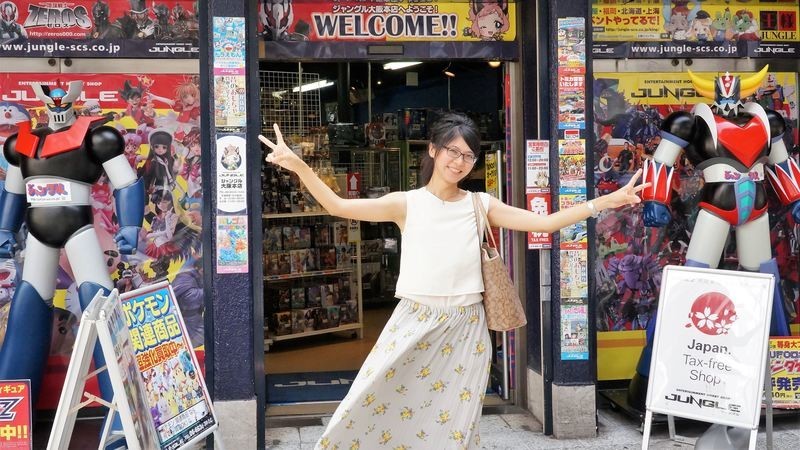 Welcome to the Jungle; in Jungle they sell all kinds of used anime goods. What makes Jungle special is that most of the things they sell are used, meaning that you can often find things at Jungle that other places are no longer selling. 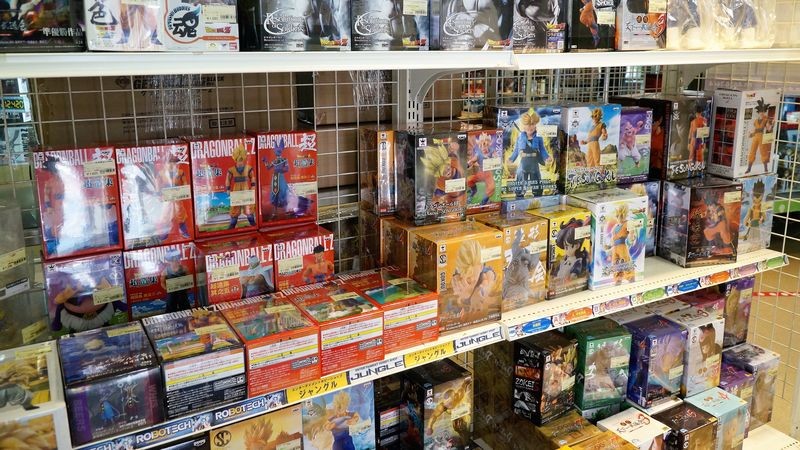 This is especially great for those of us who like such classics as Dragon Ball and One Piece. 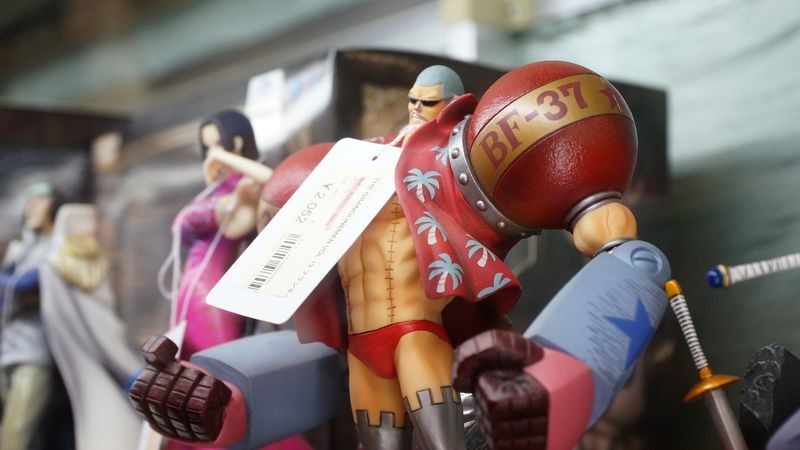 And this is the same company that runs the maid café Mel Café, so be sure to check out both when in Nipponbashi. And on the second floor of Mel Café you can even find Harajuku in the middle of Osaka, in Fickle Wish. 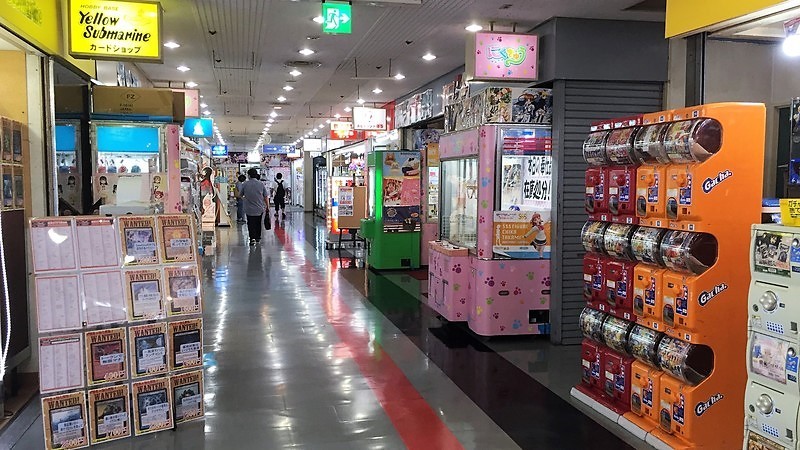 If you want something different, go to Kobe. The San Center Plaza in Kobe houses countless anime stores, arcades with UFO catchers and other games, video game stores, and other stores catering to the anime aficionado.

Everything related to anime is actually on the second floor of the San Center Plaza, so it may be a bit hard to find. 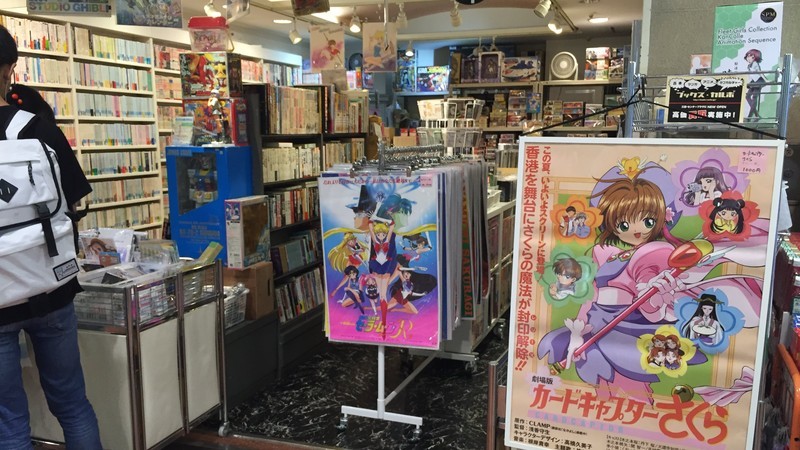 Here you can find some stores selling anime merchandise from series that ended a long time ago, so again, this is a nice place for those who want something more nostalgic.

You can also find this veritable wall of “Gachagacha” on the second floor, and try your luck at getting the figures or toys you want. The word “Gachagacha” comes from the sound these machines make when the dial is cranked. 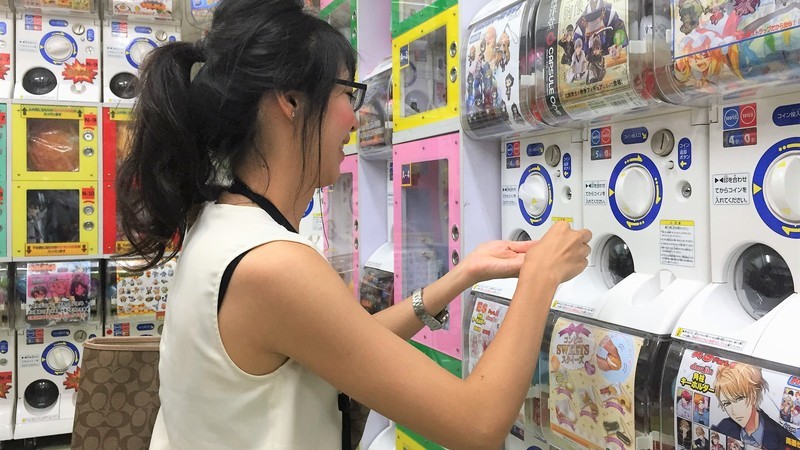 Trying your Gacha luck is easy – just put 200 yen in the machine, crank the dial, and you get a ball containing your toy. Note that the prices of the “Gachagacha” range from 200 to 500 yen. 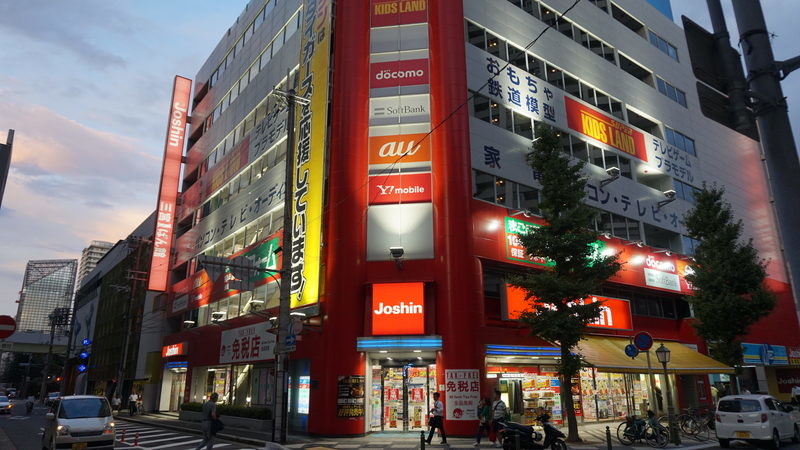 If you don’t go to Nipponbashi, you can of course get your toy-fix here in Kobe too, at Joshin Sannomiya. They also have a great selection of Gunpla and other toys, not forgetting the anime merchandise too. They even have a nice selection of Star Wars models!

Teramachi in Kyoto is great for those who want to find anime merchandise and manga in Kyoto, and also for the special anime store that has a real torii gate inside it. There are also gaming arcades that offer you a try your hand at Taiko no Tatsujin or UFO catchers.

Nipponbashi in Osaka is the main otaku place in Kansai, and for a good reason. You can find all kinds of anime stores here, catering to all kinds of otaku. This is also the only place where you can see people wearing cosplay outfits almost every day.

This place in Kobe is great for those who truly love anime and manga; you can find all kinds of anime merchandise here, old and new, and also retro games and UFO catchers.

Going to these anime pilgrimage sites in Kansai really made me want to watch Gundam again, which is why I’m presently watching the Gundam Origins movies. It’s really something special when you are surrounded by Gunpla all around you, and it’s fun seeing all the different Gundams on sale, from all the different Gundam series that have aired in the series long history.
Related keywords
All Things To Do All Kyoto Area
New Articles
Easy access! Close-to-stations spots where you can have fun indoors
All Kyoto Area
Experience the traditional crafts of Kyoto! Top 5 best experiences
Central Kyoto Area
Most popular things to do on Sharing Kyoto in 2017!
All Kyoto Area
View All New Articles
Feature Articles
Kyoto Oden Guide 2019 – From Classics to the Unconventional
Kyoto's World Heritage Level Autumn Leaves – What’s Your Plans? 2019 Kyoto Autumn Feature
Share
×
Share
Share
Tweet