In this article, I will introduce GEAR and Kyoto Butoh-kan as a new nightlife recommendation for foreign travelers coming to Kyoto.

Sightseeing in Kyoto normally means going to shrines and temples, but most of these close at around 5 p.m. Many foreigner travelers visiting Kyoto say that the nightlife in Kyoto means just having dinner, as there are not many things to do in Kyoto at night.

Here at Sharing Kyoto, most of the questions we get from you, our readers, are about recommendations for nightlife in Kyoto. In this article, you can read more about the fascinating world of GEAR and Kyoto Butoh-kan. 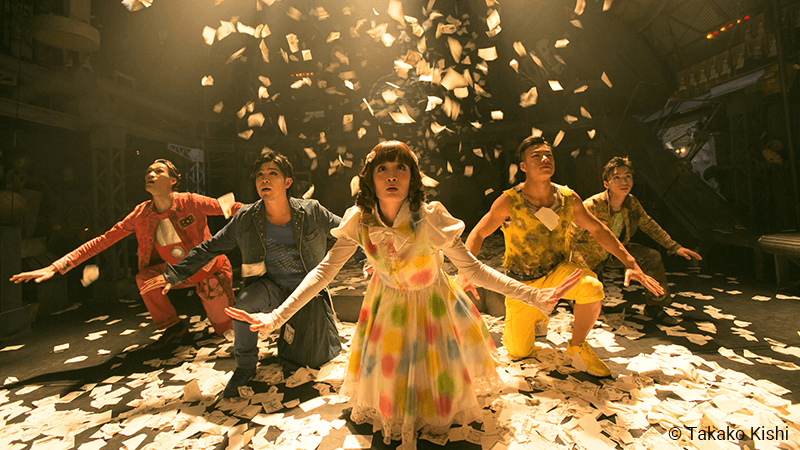 Gear is a small theater located a 10-minute walk from Hankyu Kawaramachi Station and a 5-minute walk from Keihan Sanjo Station, and at it you can see a nonverbal performance, meaning that the actors don’t speak at all during the play.

The long-running play started its seventh year in Kyoto in April 2018. This play is a popular one in Kyoto, and the numbers speak for that: the play has been performed over 2200 times and over 170 thousand people have seen it. 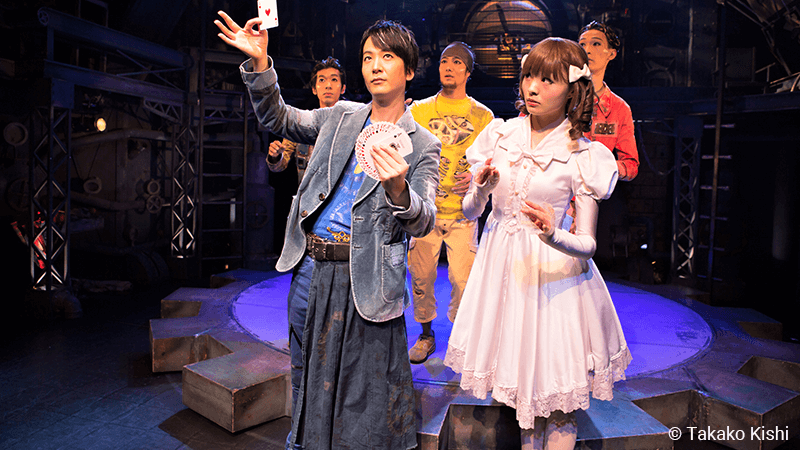 There are five characters in the play, a juggler, breakdancer, magician, pantomime, and the heroin, Doll. One of the most impressive things about GEAR is that all of the performers are first class, even compared to others in Japan. 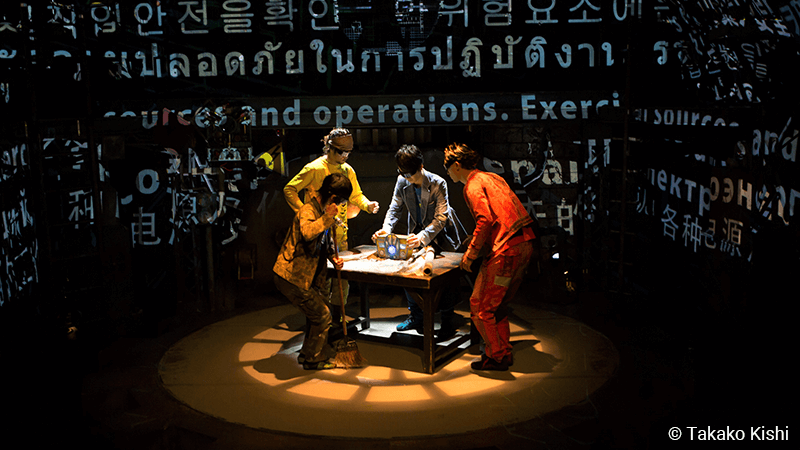 During the play, the use of projection mapping, laser beams, and huge fans is just as you’d expect from a high-tech Japanese theater. 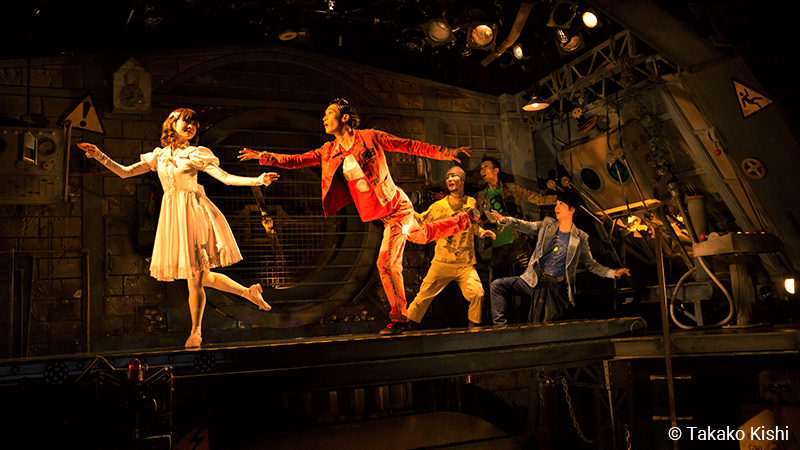 At GEAR the actors don’t have any lines, and instead, the story is conveyed through expressions and gestures, so you don’t need to worry about not understanding Japanese. 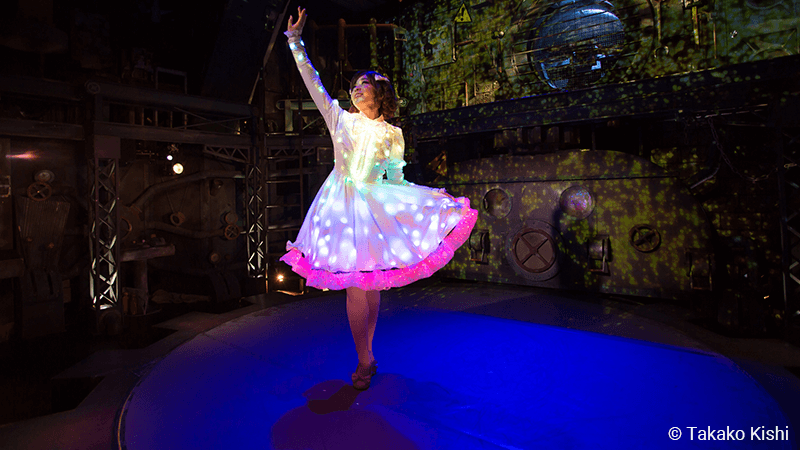 GEAR is outstanding entertainment that can be enjoyed by everyone, from little children to tourists from overseas. 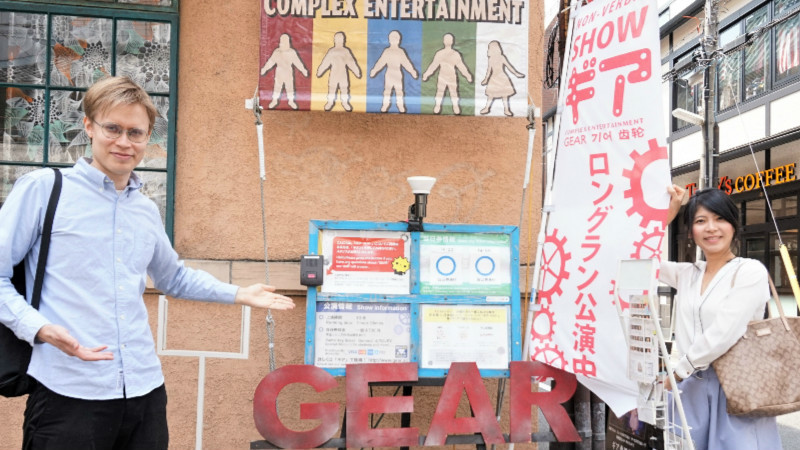 This time, in order to truly relay you the interestingness of GEAR, we got a special permission to take pictures at the theater before the play starts.

*Note that you cannot take pictures or video of the play. 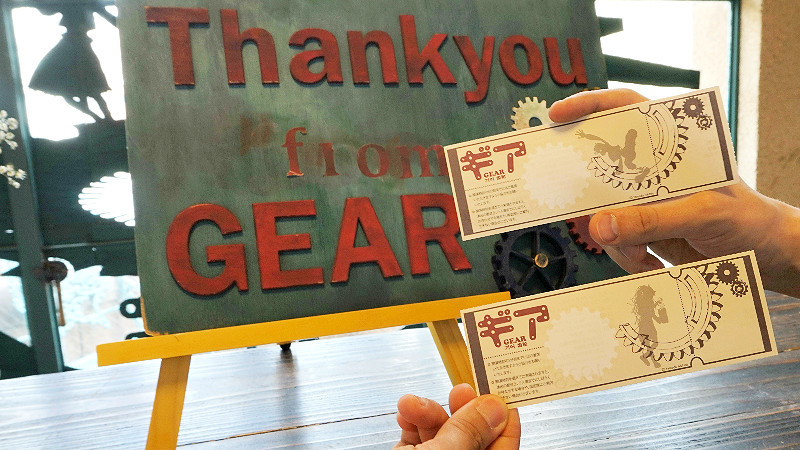 To get to the theater, you need to walk up the stairs to the third floor and pass the ticket booth. You can order tickets both online and by phone. They also sell tickets on the day, but I recommend ordering tickets online on the official website of GEAR (link below) beforehand. 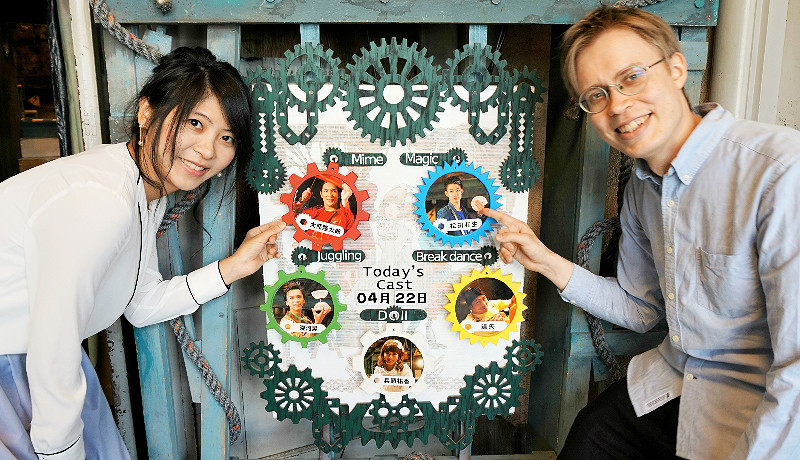 On this board by the entrance, you can see today’s actors. The actors change each run, so there’s always something new for you to see at GEAR. 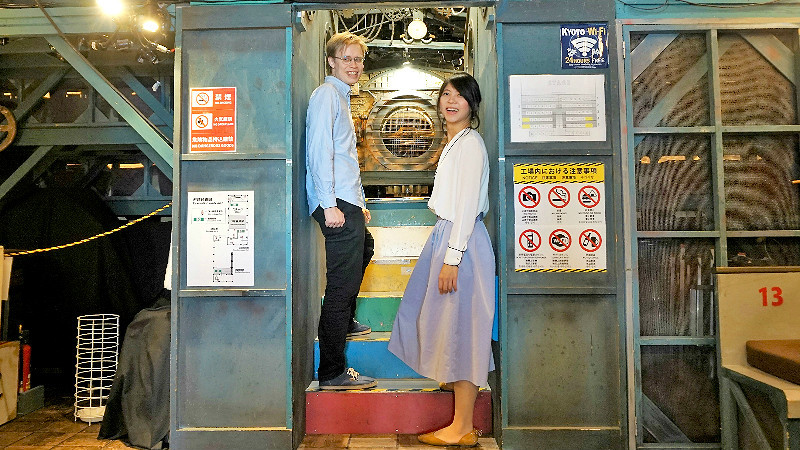 You should enter the theater at least five minutes before the play starts. You can put your bag under the seat, but as there’s a limit to how big a bag you can fit under it, I recommend leaving bigger bags and suitcases to your hotel room. 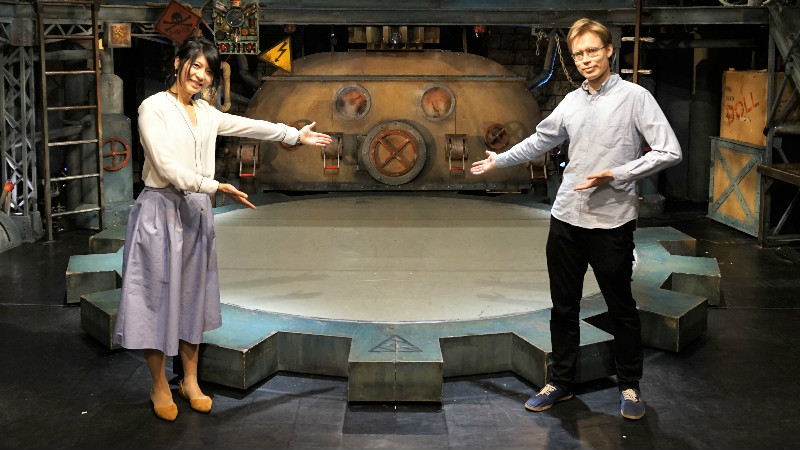 This is the stage at GEAR. It’s pretty cool! The steampunk-feel of the stage makes one excited for the play about to start. 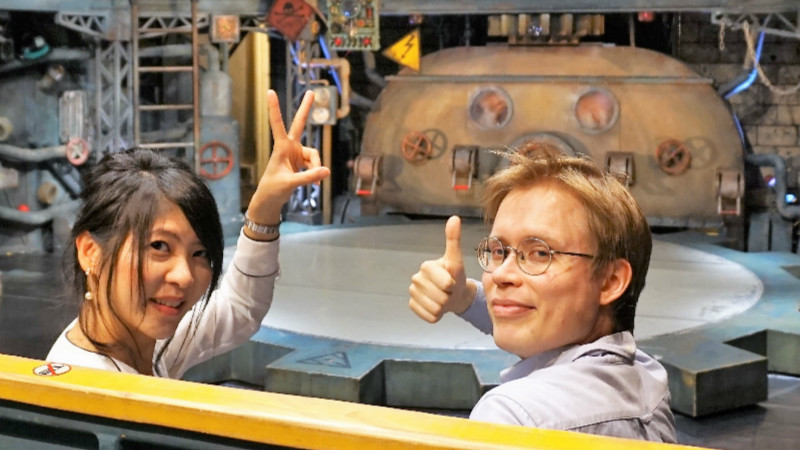 Here is the what the stage looks like seen from the first row seats. The theater only seats 100 persons at a time, so you get to see the incredible performance up close! 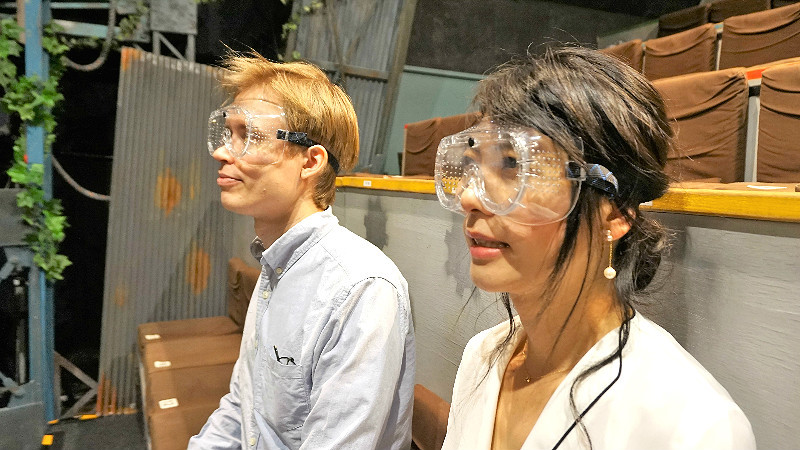 Those who wish to do so can borrow safety goggles at the theater. Why you might need these goggles is something you’ll understand after seeing the play. 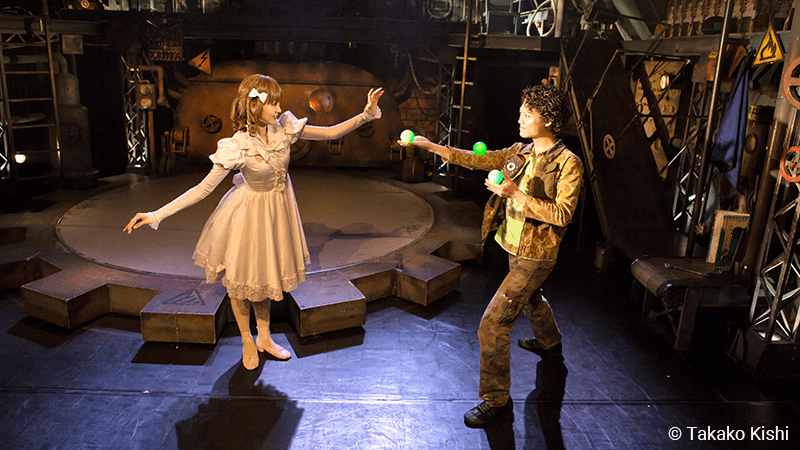 The play takes around 90 minutes. No matter how many times I see the play, I’m always captivated by the great performances and the theatrical effects. 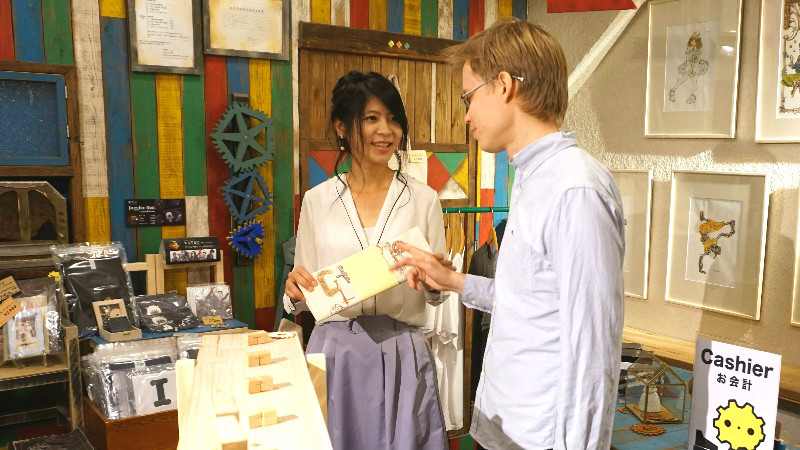 After the play ends you can also buy GEAR merchandise at the shop. 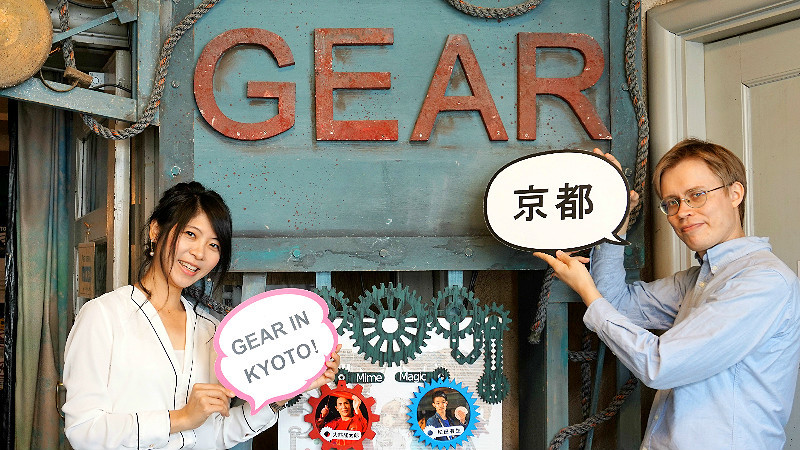 You can also take pictures in front of the board with the pictures of today’s actors like this.

There are many other parts of the play I haven’t even been able to mention there, so I really want to recommend you just go see the play once! The play is moving no matter how many times you see it. This play is something I heartily recommend to all those travelers worrying about what to do at night in Kyoto.

Click here for more information about the theatre and its location:

One of Japan’s most cherished art forms, butoh, can be seen at Kyoto Butoh-kan 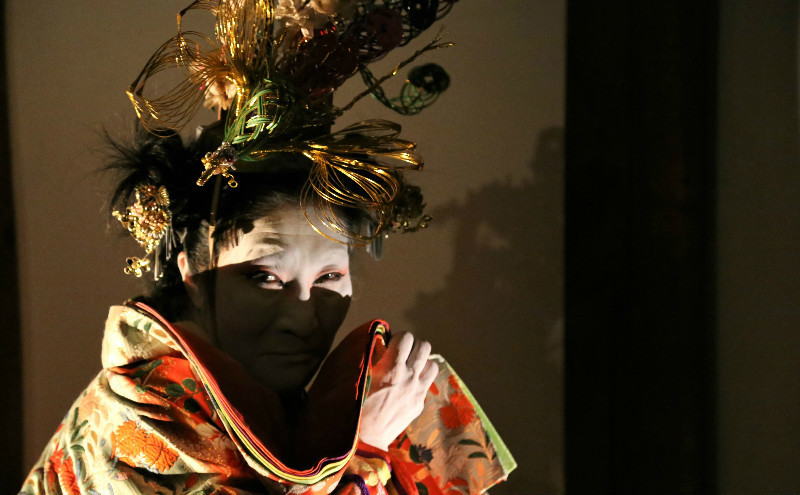 There is one other theater that the company behind GEAR, ART COMPLEX, is running. It’s called Kyoto Butoh-kan. You can enjoy the proud Japanese artform of butoh in a historic building in Kyoto. 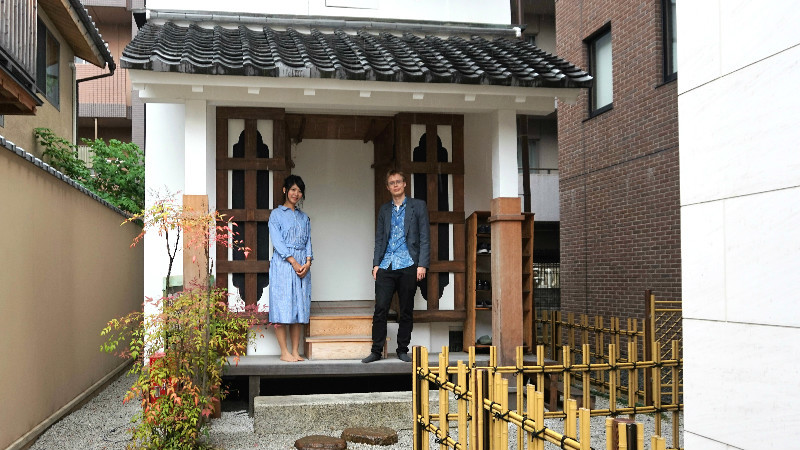 Kyoto Butoh-kan is a theater located in a renovated, historic, traditional Japanese warehouse. The only place in the world where you get to see these unparalleled butoh performances whenever you want to is Kyoto Butoh-kan. 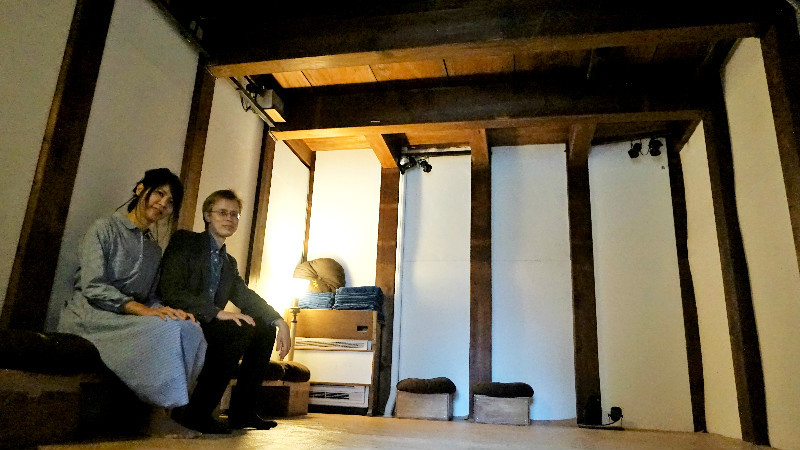 Inside the theater is only 9 square meters. Depending on the performance, the theater can seat a maximum of eight or nine people. You get to see a butoh performance in the special, closed space that this theater offers. 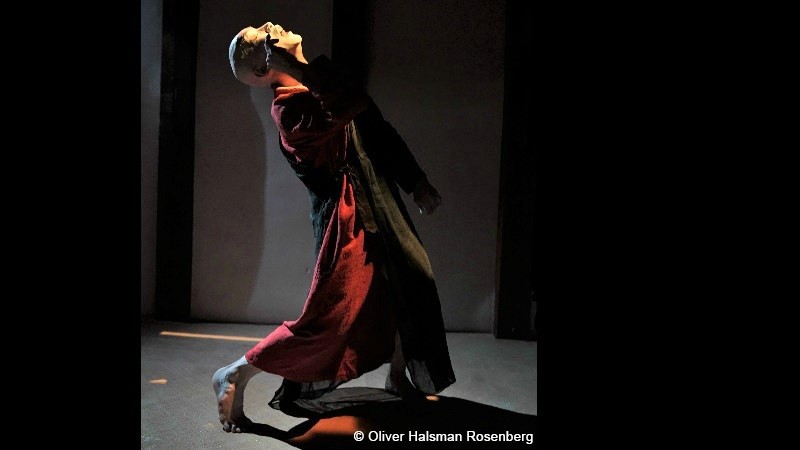 At the present in April 2018, there is a play at Butoh-kan three times a week, twice a day, starting at both 6 and 8 p.m. Tuesday’s play is called Underworld Flower, Thursday’s is Hisoku, and Saturday’s is called Antigraviton, Lovely Face. 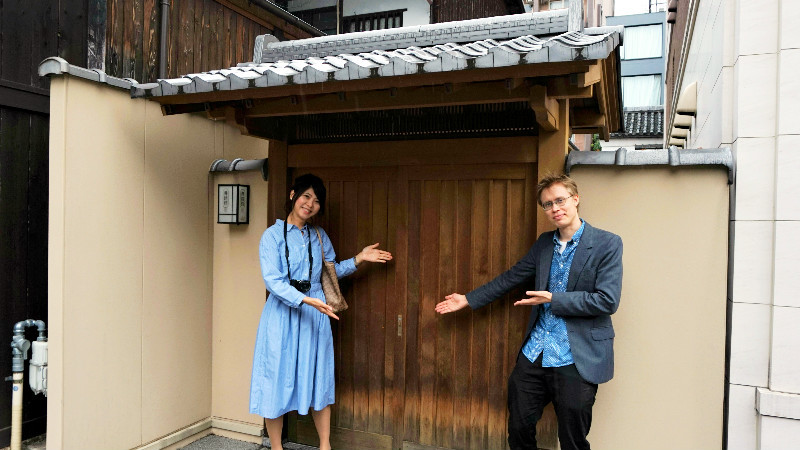 Compared to GEAR Kyoto Butoh-kan may sound a bit highbrow, but many foreign tourists come to Kyoto especially to see their butoh plays, some people even going so far as going to see all three of them during their stay in Kyoto. Kyoto Butoh-kan is something you can only experience in Kyoto, so for those into Japanese art, this is a highly recommended theatre experience.

Click here for more information about the theatre and its location:

Kyoto Butoh-kan
Downtown / Central Kyoto Area
Price
Our Reviews
Nightlife in Kyoto is said to be boring, but after seeing these two plays I can say that’s not true at all! These two plays offer an experience you can only have in Kyoto, so for those who want to have an unforgettable trip to Kyoto, be sure to go to see GEAR and the butoh plays of Kyoto Butoh-kan!
Related keywords
Attractions All Kyoto Area Downtown
New Articles
Kyoto how to: Half day itinerary to enjoy Arashiyama to the max!
Arashiyama & Sagano
The perfect itinerary for first day in Kyoto
All Kyoto Area
Easy Kyoto Station itinerary for families with kids
Central Kyoto Area
View All New Articles
Feature Articles
Kyoto Oden Guide 2019 – From Classics to the Unconventional
Kyoto's World Heritage Level Autumn Leaves – What’s Your Plans? 2019 Kyoto Autumn Feature
Share
×
Share
Share
Tweet