This blog showcases some of the incredible autumn exclusive goshuin temple seals you can receive around Kyoto!

As we enter into November, the leaves around Kyoto have gradually begun to turn a shade of deep red. Among those coming to Kyoto during this season, I’m sure there are many seeking to catch a glimpse of the beautiful autumn leaves this city's temples have to offer.

This blog, however, will be focusing on the autumn exclusive goshuin temple seal stamps that you can receive as a memento of your time traveling aroudn Kyoto’s autumn leaf covered temples.

What are goshuin? Goshuin are seals or stamps given to worshippers by temples as proof of their visit. They are thought to be called 御朱印(goshuin) because a stamp (印) is used to press the name and object of worship of the temple in red/crimson (朱) onto paper. Each seal covered piece of paper then has the names contained within the seals written on them in inked calligraphy.

As goshuin are considered very sacred, it is best not to pin them onto the wall or anything and instead, keep them somewhere safe.

While you typically need a particular seal book called a goshuincho to receive these seals, this blog focuses on temples that allow those who don’t regularly collect goshuin and are just wanting to receive them for the special autumn exclusive designs, to do so.

For their incredible beauty, goshuin are rather reasonably priced, so if you can, get your hands on a few and make them mementos of your time spent in Kyoto during the beautiful fall! 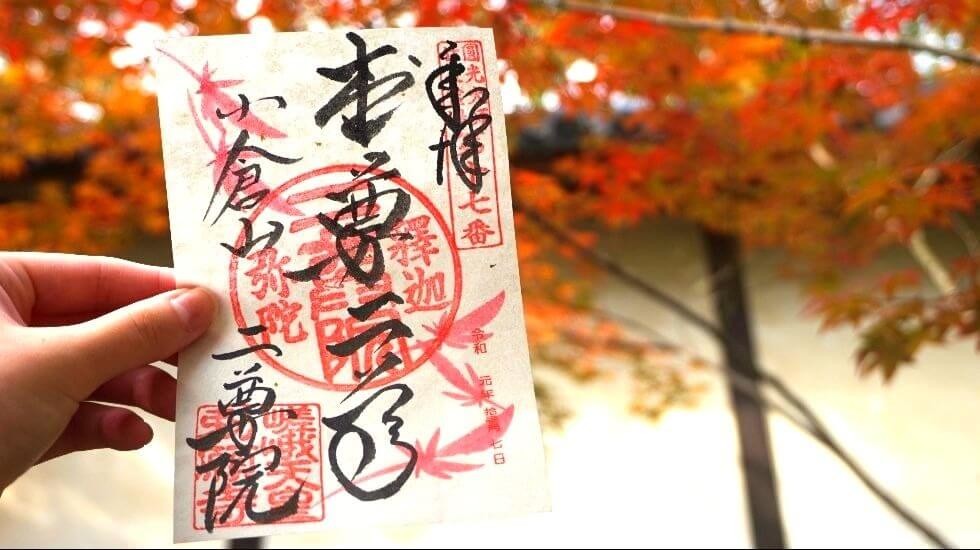 [Distribution location] Reception booth next to the main hall

Nison-in Temple sits in a beautiful location at the foot of the Ogurayama Mountain, which is often used as the theme of traditional Japanese waka poems. Known for its autumn leaves, Nison-in Temple attracts a large number of visitors every year.

It's hard to tell in the photo, but paper infused with gold dust is used, giving this particular goshuin a beautiful gold shine whenever you move it around.

In the same way, a gold glitter peppers the painted red autumn leaves, giving the seal a unique sparkly feeling. 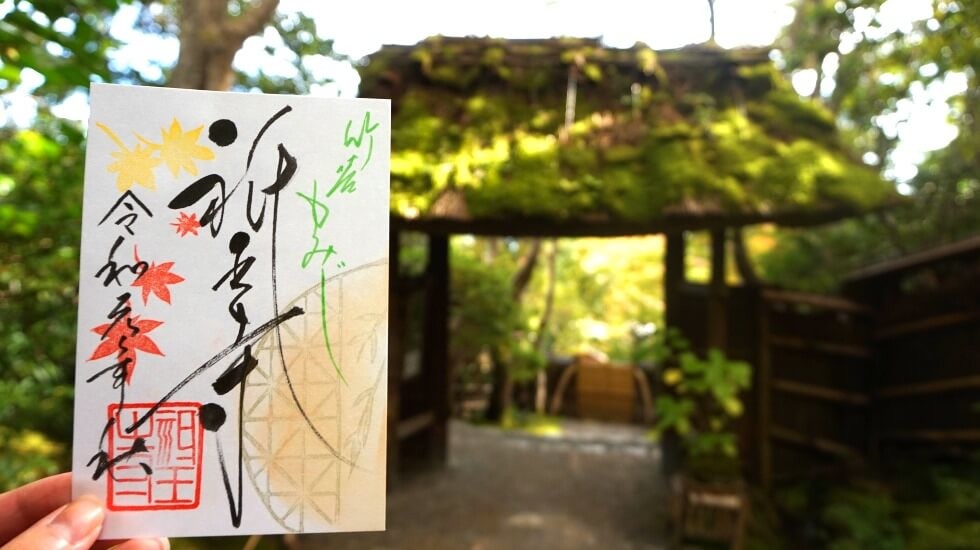 Only a 5 minutes’ walk away from above mentioned Nison-in Temple, the Giouji Temple, also offers an autumn exclusive goshuin seal.

The goshuin seal of Giouji Temple is made distinct by three aspects; the momentum filled brushstrokes of the caligrpahy, the red and yellow autumn leaf designs, and the light green characters that were inspired by the bamboo forest inside the temple grounds.

The period for which these seals are distributed isn't set. Instead, they become unavailable when the temple's pre-prepared stock runs out. So if you’re interested in getting your hands on one, you’ll need to act fast! 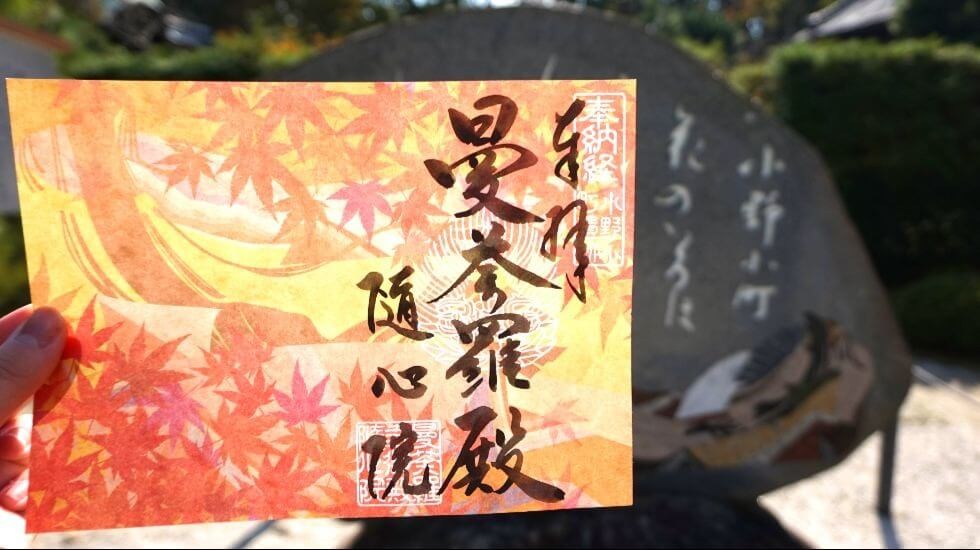 Zuishin-in Temple belongs to the Shingon school of Buddhism.

The temple is known for being where Yukari Ono no Komachi, a female Heian period poet known as one of the world’s three most beautiful women, spent her days.

Inside the temple is a well where Ono no Komachi was said to wash her face every morning and night, and a burial mound filled with a thousand letters addressed to the beautiful poet.

Because of this connection with Ono no Komachi, the goshuin seal of the Zuishin-in Temple features a drawing of her.

The depiction of Ono no Komachi in a beautiful kimono turned away from us among a sea of autumn leaves provides this goshuin with a beautifully Japanese feel.

Another distinctive quality of this seal is its rare painting-like portrait design.

We recommend this seal to anyone interested in goshuin with drawings or pictures on them.

[Directions] 5 minutes’ walk from Exit 1 of the Ono Sta. on the Tozai Subway Line. 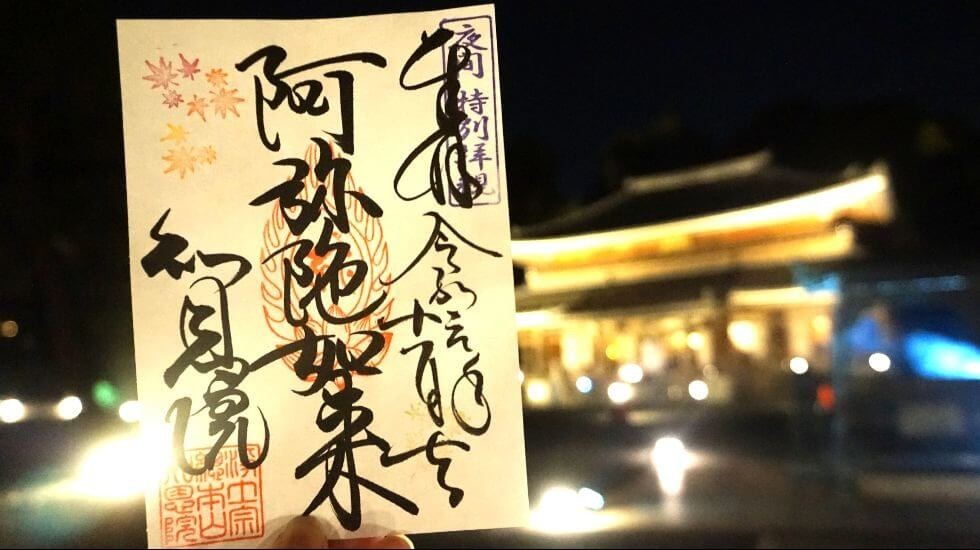 Chion-in Temple is the head temple of the Jodo-shu school of Buddhism. Every autumn, this temple sees people flock to its gates for its special nighttime viewing event. During this event, an exclusive night time only goshuin is distributed.

While the top left red and orange autumn leaf designs are pretty, what really needs to be seen is the design in the bottom right corner. Although it doesn’t show up too well on camera, the leaves here feature a green and yellow gradation. As the leaves are printed on with a glitter-filled ink, they shimmer and shine like beautiful lit up maple leaves on an autumn night when the paper is moved around.

This goshuin also receives the date you visited the shrine written on it in calligraphy, so we highly recommend getting your hands on one as a memento of this special nighttime viewing. 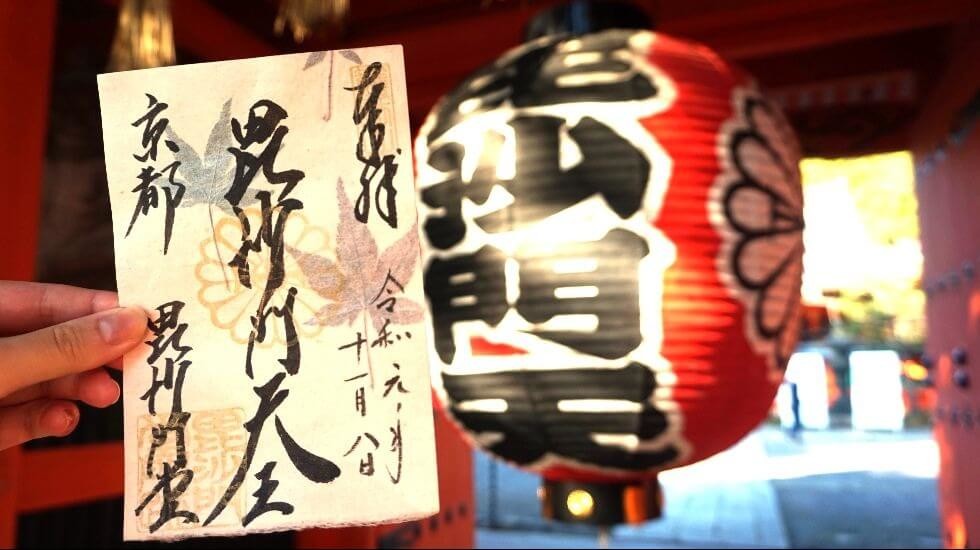 Located in the Yamashina ward of Kyoto City, Bishamon-do Temple belongs to the Tendai school of Buddhism. The trees that line the stone steps leading to the temple have an unmatched overwhelming beauty during autumn that draws flocks of people every year.

The goshuin seals of the Bishamon-do Temple feature something not seen in very many other places, actual maple leaves pressed and soaked into the paper. Because of this, each seal is entirely unique. Each goshuin features slightly different sized leaves at different places on the paper, so find one that really speaks to you. After you’ve chosen your paper, hand it to the temple staff, and they will write the date of your visit in calligraphy for you.

I received a goshuin with both red and green maple leaves, however, there are ones that feature only red and only green, so go ahead and pick whichever design you like the best!

The period for which these seals are distributed isn't set. Instead, they become unavailable when the temple’s preprepared stock runs out. So if you’re interested in getting your hands on one, you’ll need to act fast!

If you weren’t aware of goshuin seals or hadn’t ever received one, then next time you’re at a temple to enjoy the autumn leaves, I urge you to purchase one of the beautiful autumn exclusive ones and give yourself a memento of your time in Kyoto!
Related keywords
Temples & Shrines Autumn All Kyoto Area
New Articles
Kyoto’s absolute top 20 Japanese gardens you must visit!
All Kyoto Area
Experience the culture of Kyoto through these 5 cooking classes!
All Kyoto Area
Top 7 weird spots in Kyoto off-the-beaten-path
All Kyoto Area
View All New Articles
Recently Picked Up Articles
Full day itinerary around Philosopher’s Path in Kyoto with great scenery
Nanzenji Temple & Ginkakuji Temple
18
What to Wear in Kyoto During Autumn
All Kyoto Area
11
Ohara, Kyoto – Japanese Gardens, Mountain Huts and Autumn Leaves!
Ohara
9
Feature Articles
Kyoto Oden Guide – From Classics to the Unconventional
Kyoto's World Heritage Level Autumn Leaves – What’s Your Plans? Kyoto Autumn Feature
Share
×
Share
Share
Tweet