What to Wear in Kyoto During Autumn

This article shows you what to pack and what to wear in Kyoto during autumn.

In this article, we’ll show you exactly what you need to pack to brave the coldest part of Kyoto autumn, mid-November to early December.

Next to that we have photos of the actual streets of Kyoto to give you an idea of what people in Kyoto really wear during this season.

Finally we had the Sharing Kyoto staff model their autumn fits so we could show you exactly what to wear.

First off, let’s take a subjective look at the average temperatures of November and December in Kyoto. 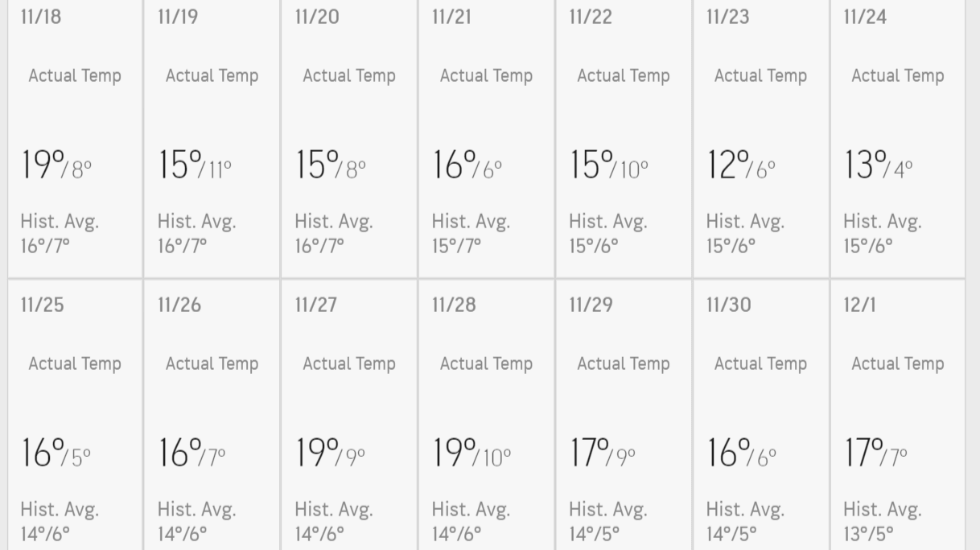 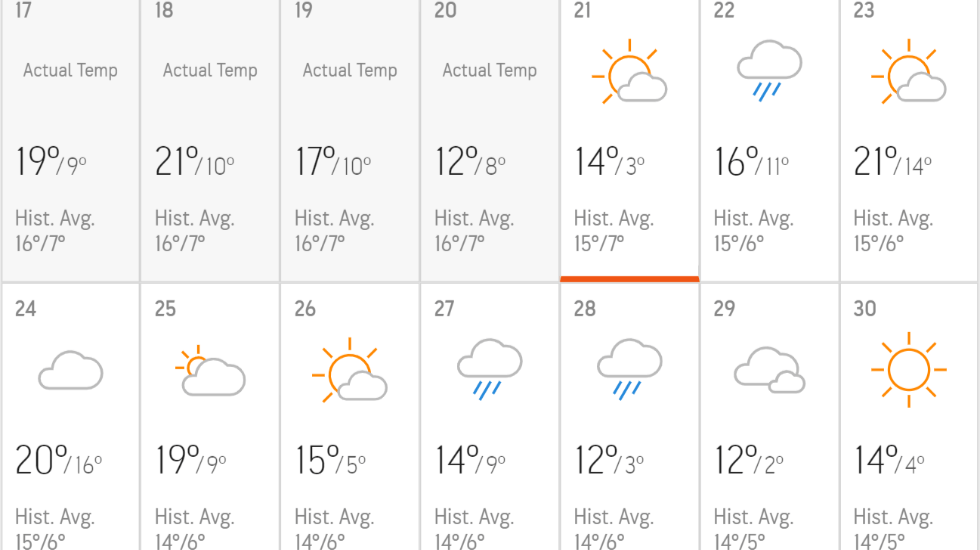 In addition, the weather information for the period around Nov. 21, 2019, was as follows. Although the temperature differs from day to day, it follows the general pattern of prior years. As you can see from the above data, there was quite a temperature difference between days. 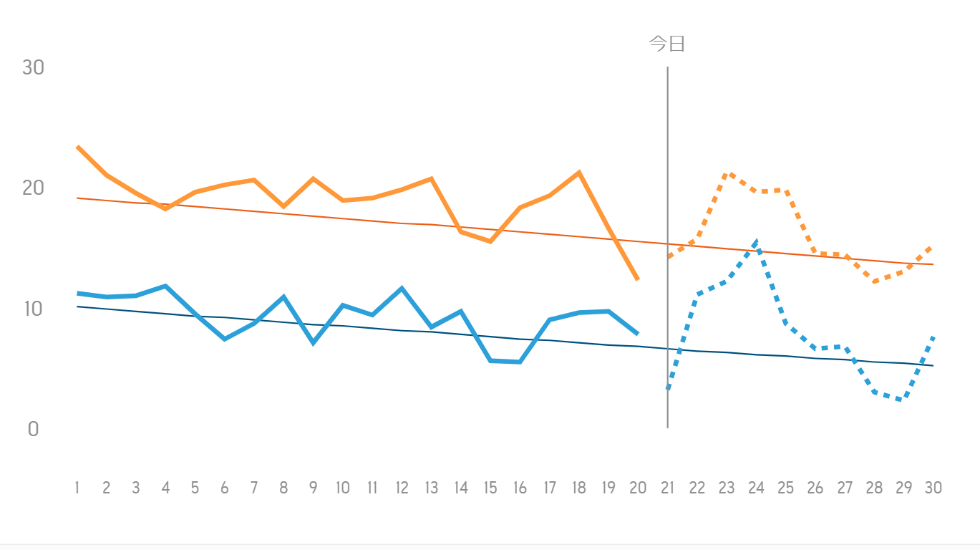 The graph above shows the temperatures of each day. Even in early to mid-November, there are warm, sunny days where you won’t need a big winter coat. On these days, a jacket or warm shirt should do the job. However, as early mornings and evenings still get quite cold, an outer of some sort is still a must.

Also, even during the day when you go see the autumn leaves, it’s still recommended that you take a jacket or sweatshirt as you may spend a lot of time in the shade.

Around mid to late November, as the autumn leaves reach their peak, the weather really starts to get cold. For this period, we recommend taking a big wintery coat with you even for midday outings.

As it’s rather hard to visualize with data alone, we took some shots of the streets of Kyoto to give you an idea of what everyone is wearing. 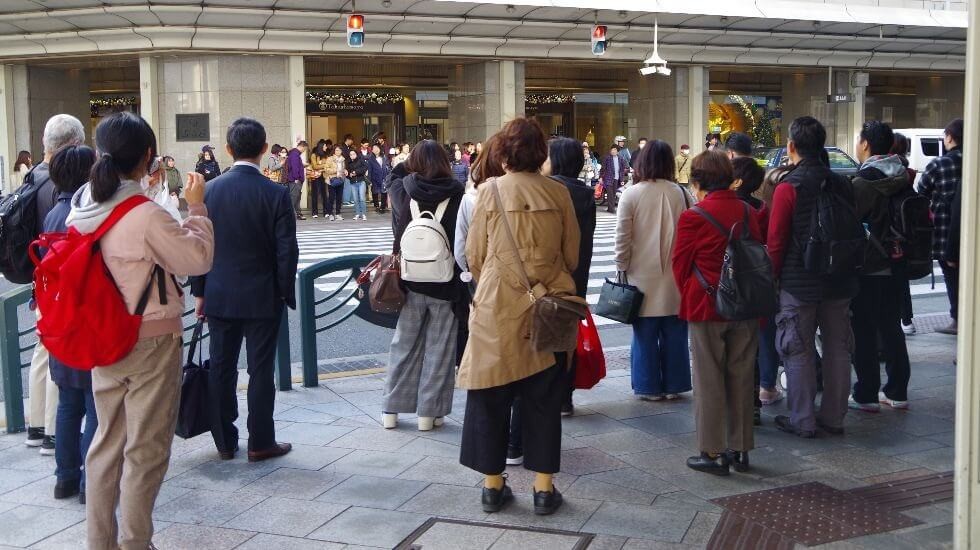 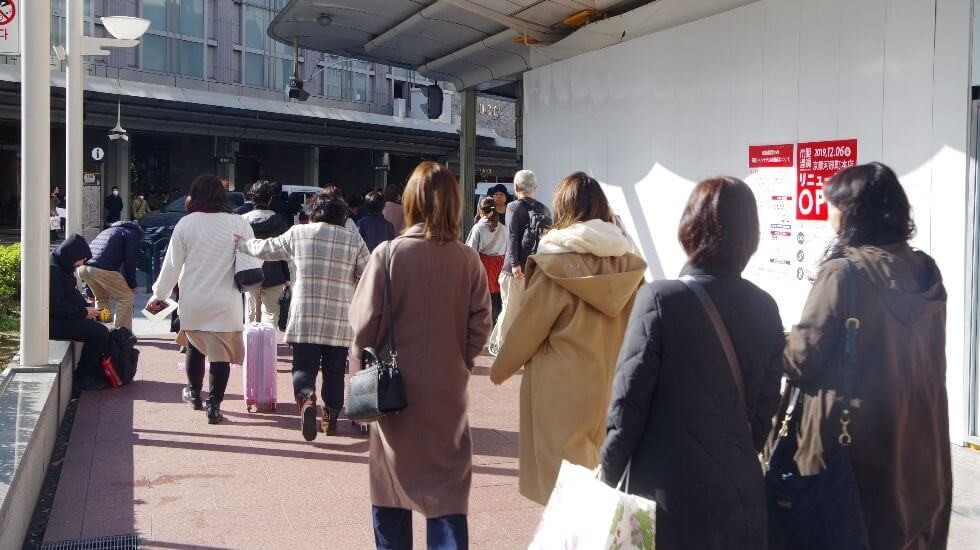 These two photos were taken at 10 a.m. on November 20 at the Shijo Kawaramachi intersection. While the sun was shining, it was only 11 °C out, and you could feel hints of early winter on the air. Many of the people around this area were wearing thick, warm coats. 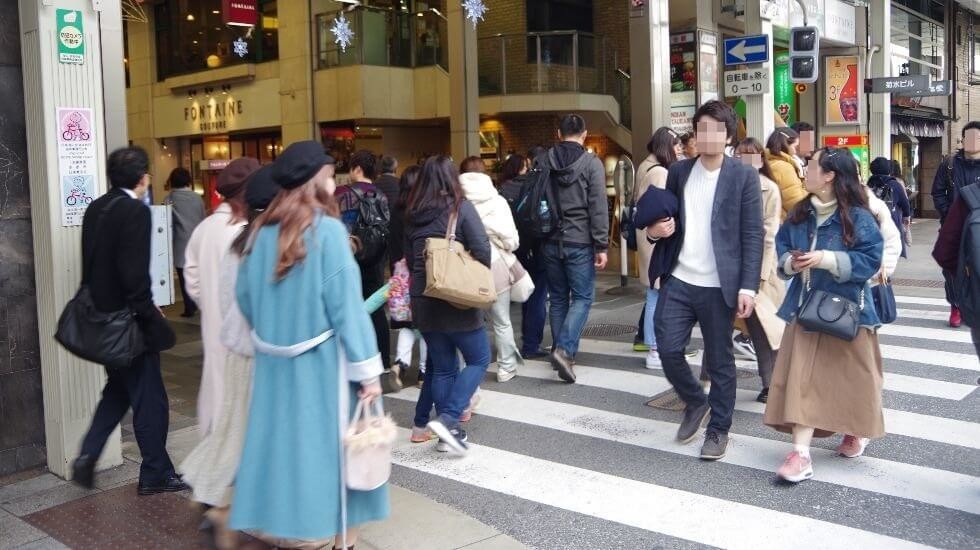 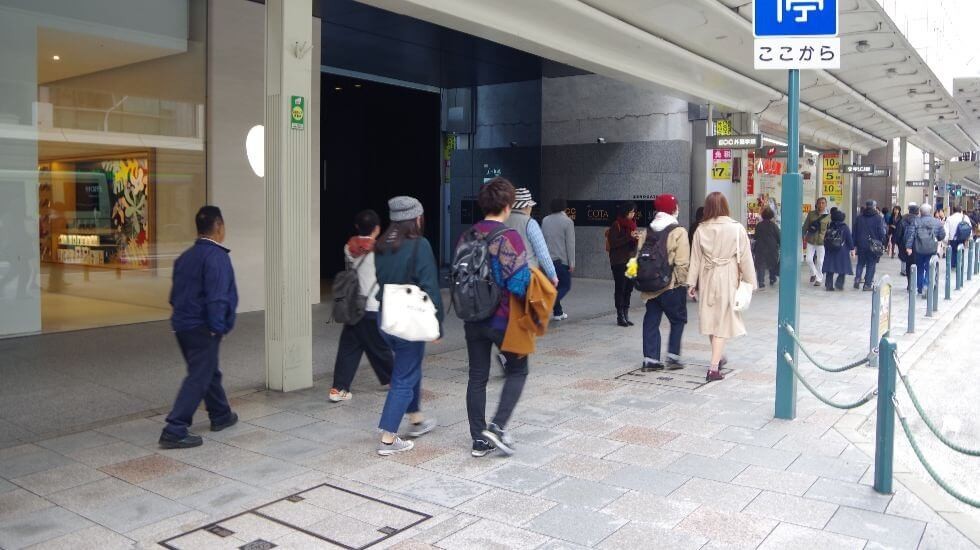 These two pictures were of Shijo-dori at 2 p.m., when the temperature was around 13 °C. While the aforementioned cool whispers of winter could still be felt, the sunshine provided a much appreciated warm refuge. Around this time, more people were wearing just jackets, and those who had left home with big coats had now taken them off and slung them around their arms. 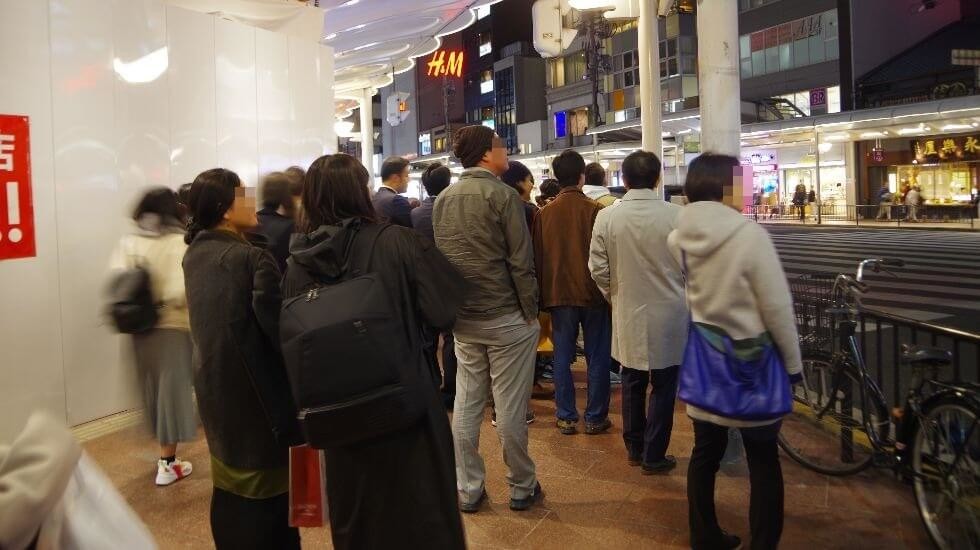 This picture was of the Shijo Kawaramachi intersection at 7:30 p.m. With the sun now gone, the streets were plunged into a cold chill. More people were wearing big coats, down jackets, and some even other winter gear such as knit caps and scarves.

After seeing these photos, have you been able to get a sense of the temperature differences in Kyoto?

If you’re planning on staying out all day, then we recommend bringing an easy to carry and easy to take off coat.

Below, we had the lovely Sharing Kyoto staff model some examples of actual autumn clothes for us. 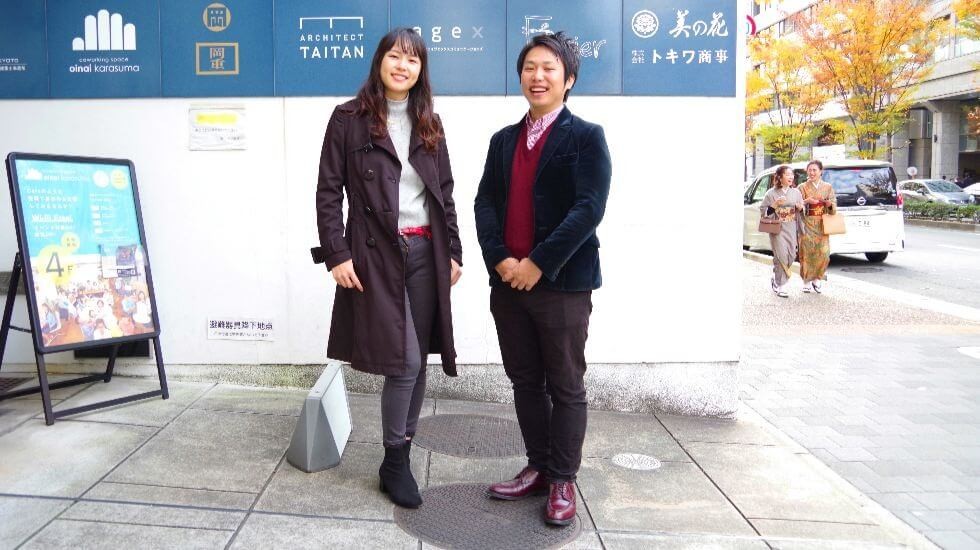 Above are editor in chief Mr. Yamasaki and Sakurako. Mr. Yamasaki is sporting a corduroy jacket atop a sweater, over a shirt. Sakurako is wearing a warm cotton inner under a slightly thick trench coat. While Mr. Yamasaki doesn’t have a coat and Sakurako isn’t layering, thanks to thick materials and the number of layers, these clothes are apparently enough for them to brave the cold morning and nights. 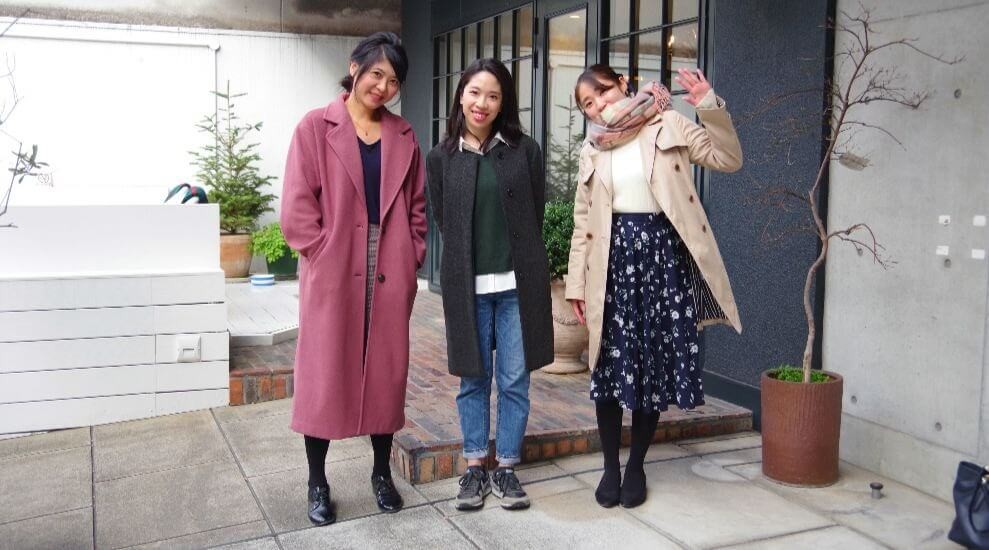 Next are Vanessa (left), Miyabi (middle) and Yumemi (right). Vanessa is wearing a thin inner under a thick winter coat. Miyabi is all about the layers with her shirt, sweater, over coat combo. Always going on about the cold, Yumemi has gone for a more full on approach, with her coat and seasonally questionable thick, wintery scarf.

They say that you can tell a lot about someone from their clothes, and this seems like a good example. For those who are more averse to the cold, it might be a good idea to, like Yumemi, add a scarf or other similar item to your fit.

While the autumn leaves in Kyoto only reach their peak during the three weeks between late November and early December, the temperatures in the city drop from a casual chill to dead-of-winter freezing.

So if you’re planning on coming to Japan in December, it’s recommended that you pack even warmer clothes than those worn by our lovely models above.

Cold weather can be a harsh mistress while traveling, so make sure you don’t skimp on the warm clothes to save yourself from going down with a cold.

Also, if you want a more easily digestible guide, we have a video about just this topic over on our YouTube channel, so go check it out!

Packing has to be one of the biggest pre-travel pains. And I think we’ve all experienced either packing too much and not being able to close our suitcases or packing too little and ending up in trouble when you get off the plane. Particularly as the peak season for autumn leaves in Japan is right when autumn’s transitioning to winter, it’s quite tough to know what the weather will be like. But, if you take a look over this article, you should be able to get a good idea of precisely what you’ll need.
Related keywords
All Things To Do Autumn All Kyoto Area
New Articles
Top 4 spots in Kyoto to view beautiful flowers
All Kyoto Area
6 Must-Knows for Kyoto's Cherry Blossom Season
All Kyoto Area
5 Life-changing Zen Buddhist Temples in Kyoto
All Kyoto Area
View All New Articles
Recently Picked Up Articles
Full day itinerary around Philosopher’s Path in Kyoto with great scenery
Nanzenji Temple & Ginkakuji Temple
25
Ohara, Kyoto – Japanese Gardens, Mountain Huts and Autumn Leaves!
Ohara
7
Feature Articles
Kyoto Oden Guide – From Classics to the Unconventional
Kyoto's World Heritage Level Autumn Leaves – What’s Your Plans? Kyoto Autumn Feature
Share
×
Share
Share
Tweet