Due to COVID-19, some information contained in articles may be out of date. Please check with establishments directly or see their websites for up to date info.
Best Bars / Pubs in Kyoto
Apr. 07, 2020 UPDATE
Craft Beer & Pizza 100K
Traveler Friendly
This restaurant/bar is close to Kyoto Station, they have staff fluent in English, and you can enjoy Japanese craft beer!
Menu
Japanese and English
Languages spoken
English
Kyoto Station Bars / Pubs

Traveler Friendly
This restaurant/bar is close to Kyoto Station, they have staff fluent in English, and you can enjoy Japanese craft beer!
Menu
Japanese and English
Languages spoken
English
Kyoto Station Bars / Pubs
159 0 5.3 1 reviews
Basic information of Craft Beer & Pizza 100K
Story & Recommendation
Craft Beer & Pizza 100K - A Fusion of Japanese and Western Cuisine with All Kinds of Pizza and Beer!
Located near Kyoto Station, Craft Beer & Pizza 100K is a pizza pub that looks like any other modern new wave restaurant from the outside but hides a Broadway-esque bar counter inside.
While this restaurant offers a huge range of pizzas all made by hand, the best part has to be the mouth-watering aroma of freshly cooked pizza that wafts from the stone pizza oven. However, we shouldn't forget the other important thing here: the monthly rotation of Japanese craft beer specials!
If you can’t decide which beer to order, then try the tasting menu that offers a small taste of three different beers.
At night, Craft Beer & Pizza 100K is often full of customers from overseas, so it boasts a familiar international vibe that's perfect for enjoying a pint and a pizza!
1Recommended

Margarita Pizza / ¥980 (excl. tax)
Craft Beer & Pizza 100K's Margarita is their signature pizza. Featuring a crispy bottom with a fluffy crust, this pizza's heavenly mozzarella cheese and tomato base combo pairs perfectly with the buttery dough. The tomatoes provide the pizza with a slightly sour accent that makes this one of the best choices to have with a nice glass of Japanese craft beer.
2Recommended

Three Japanese Craft Beers / ¥1,500 (excl. tax)
Can’t decide what to drink? Then order the craft beer tasting menu of three different Japanese craft beers! We tried a pale ale from the Miyazaki Prefecture brewery Hideji, a wheat ale from the Kyoto Brewing Company called Fuyu no Kimagure and a stout from Wakayama Prefecture’s Nagisa Beer. After downing these glasses, you’ll surely know which one you like the best!
3Let's Try!

Fish & chips / ¥720 (excl. tax)
Craft Beer & Pizza 100K's fish & chips offer a succulent and delicious take on a British commonwealth classic. When dipped into the beautiful tasting tartar sauce, the flavors of the lightly battered fish are brought out even more. Keeping on their skins, the chips keep it rustic and offer a very homely feel that makes them just that much more satisfying to munch in between sips of your beer.
4Let's Try!

Spanish Garlic Ghrimp: Gambas al Ajillo / ¥730 (excl. tax)
This Gambas al Ajillo is made up of a shrimp, mushroom and oily garlic sauce that come together in a combination that's hard to resist. Dipping the hard toasted baguette in the sloppy sauce makes the dish just that much more satisfying it's so good.
How to Order 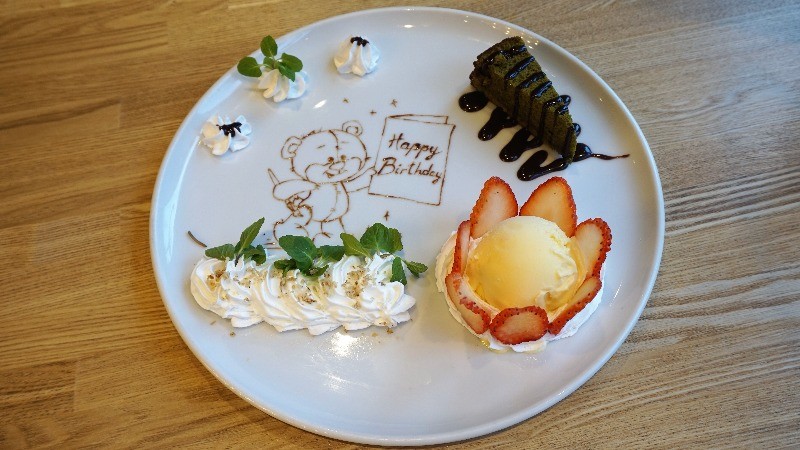 They also have a really cute birthday-platter! If someone in your group happens to have their birthday on the day you go to Craft Beer & Pizza 100K, remember to let the staff know and order this!