- 十二段家 花見小路店 -
Traveler Friendly
They have their menu in English, some of the staff can speak English, so you should have nothing to worry about.
Menu
Simple English, Japanese
Languages spoken
Simple English
Gion & Kiyomizu Temple Sukiyaki / Shabushabu
1923 11 7.3 1 reviews
Basic information of Junidanya Hanamikoji
Story & Recommendation
Enjoy shabu-shabu where it all started, at Junidanya Hanamikoji restaurant
Shabu-shabu is popular in Japan and abroad. But do you know which restaurant first came up with the dish now known as shabu-shabu? And that that restaurant is right here in Kyoto, and that it is called Junidanya Hanamikoji? This restaurant is in a tastefully renovated town house, and if you enter it you can have great Tamba beef from Kyoto. The fatty beef is soft and just melts in your mouth, and the taste is so nice that you just can’t stop eating. If you dip the beef into the gomadare sesame sauce, the recipe of which has not changed since the founding of the restaurant, the beef tastes even better. If you want to have good-quality, authentic shabu-shabu, I heartily recommend you go to Junidanya, Hanamikoji restaurant. This restaurant is in the famous sightseeing area of Gion in Hanamikoji, so the restaurant is easy to find and they are open for lunch and dinner both so if you are in the area, how about having some shabu-shabu?
1Recommended

Shabu-shabu / ￥7,000 yen （Tax included） for one person (Shabu-shabu has to be ordered for two or more people)
If you go to Junidanya, there can be no question of what you should eat(in the picture you can see shabu-shabu for one person) . This shabu-shabu set is a must-eat. Together with the soft, melt-in-your-mouth beef, you have shitake mushrooms, mizuna, long green onion, and other vegetables. The recommended way of eating these at Junidanya is to dip them into the sesame sauce. This sesame sauce is absolutely delicious, and the slight sourness and the fragrance of the sesame go well with the beef. I hope you will also have a chance to enjoy shabu-shabu at the place where the dish was born, Junidanya.
2Recommended

Shabu-shabu Teishoku / ￥3,300 (Tax included)
If you want to enjoy shabu-shabu for a more reasonable price, I recommend this shabu-shabu teishoku meal set. This meal set can be had for both lunch and dinner, and although compared to the shabu-shabu I just introduced, you don’t get as many vegetables and as much beef, but for a meal set the portion is big enough, and the taste is of course good. This meal set is great also for those who want to try shabu-shabu for the first time.
How to Order 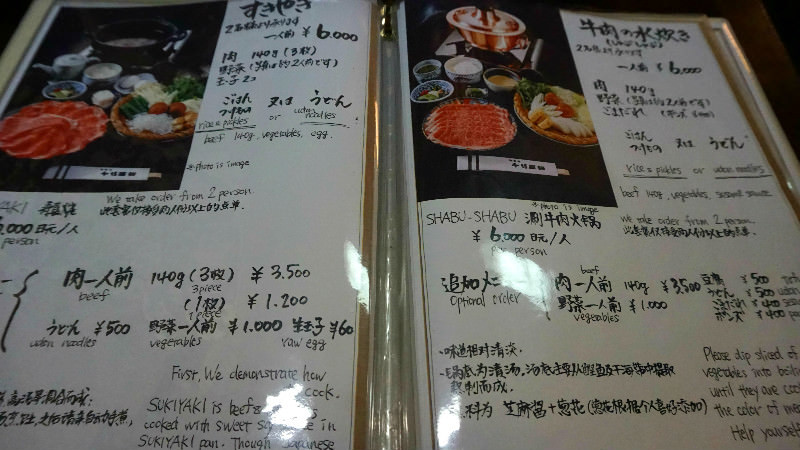 There are pictures on the menu. In this menu, they have both English and Chinese. 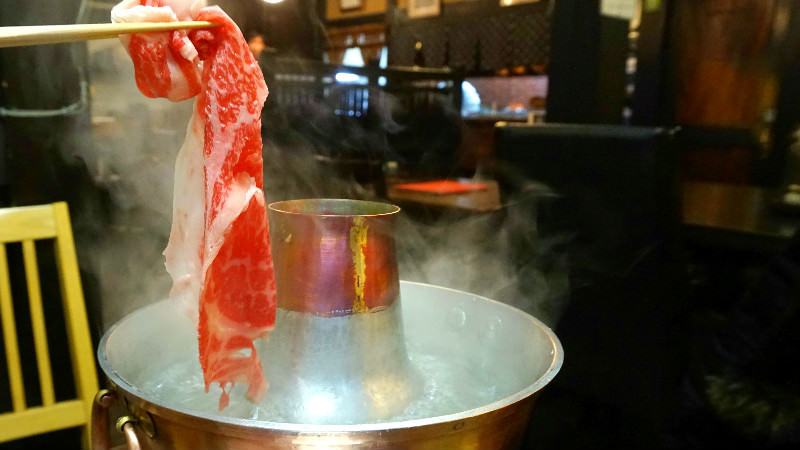 The shabu-shabu hot pot used at Junidanya is a special one, the cone in the middle almost resembles a chimney. They have used this type of a hot pot since the beginning. So if you want to have authentic Japanese hot pot, Junidanya is the place to go to!

If you run out of beef or vegetables, you can order more. The prices are listed on the menu. Time to have some shabu-shabu!