Due to COVID-19, some information contained in articles may be out of date. Please check with establishments directly or see their websites for up to date info.
Best Bars / Pubs in Kyoto
Feb. 26, 2021 UPDATE
Rocking bar ING
Traveler Friendly
No language barrier
Menu
Japanese, English
Languages spoken
Japanese, English
Downtown Bars / Pubs

Traveler Friendly
No language barrier
Menu
Japanese, English
Languages spoken
Japanese, English
Downtown Bars / Pubs
828 1 --- 0 reviews
Basic information of Rocking bar ING
Story & Recommendation
Bring your rock n roll spirit in a night out at ING
Sometimes in a foreign country, a traveler may feel the need to get back in a cave and surround themselves with familiarity. Not exactly a bad thing after taking in few days of new adventures in the land of the rising sun. Inside rocking bar ING are guitars hanging on the wall and flowing rock music playing all night. People from all over the world visit here from those who are visiting here for vacation to those who reside in Japan. Open until 3am on weekdays and 5am on weekends, it’s a place people can hop in and spend a pleasurable night over some beer even after missing their last train home.
1Recommended

Beer / ￥600 ~ ￥700
Both Japanese and overseas beer are available. Try the Yebisu beer, popular Japanese beer by Sapporo, in draft or by 633ml bottle. If you are into dark beer, there is also Irish beer Guinness. Corona beer, Shandy gaff, and red eye are also on the menu.
2Recommended

Jack Daniel on the rock / ￥800
Whiskey, gin, vodka, wine, sake, and cocktails are all available. A classic drink, Jack Daniel is the way Shots are often ordered to be included in the fun of table games like Jenga and cards that are placed on the table.
3Let's Try!

Karaage (fried chicken) / ￥600
There is a good list of food items on the menu such as Karaage, or fried chicken. Snacking food that compliments drinking is called “otsumami” in Japanese. Edamame is also available along with fries, cheese, nuts, and other small bites.
How to Order 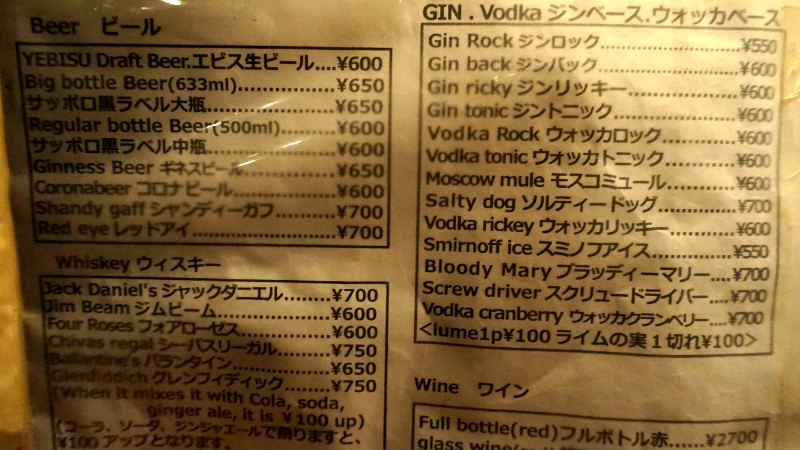 Can’t go wrong by starting off with a beer!