Due to COVID-19, some information contained in articles may be out of date. Please check with establishments directly or see their websites for up to date info.
Best Izakaya in Kyoto
Sep. 12, 2018 UPDATE
Enamiya Saku-no-ma - えなみ家 サクの間 -
Traveler Friendly
They have an English menu, and the owner can speak simple English. You probably won’t have any problems communicating.
Menu
English
Languages spoken
Basic English
Downtown Izakaya

- えなみ家 サクの間 -
Traveler Friendly
They have an English menu, and the owner can speak simple English. You probably won’t have any problems communicating.
Menu
English
Languages spoken
Basic English
Downtown Izakaya
534 8 --- 0 reviews
Basic information of Enamiya Saku-no-ma
Story & Recommendation
Piping Hot Teppan Cuisine and Drinks in the Backstreets
Kyoto’s drinking district, Kiyamachi, is home to Alley 13 (juusan banchi roji) and its many famous izakayas and bars. One of those famous establishments is Enamiya Saku-no-ma. It’s located up a staircase in Alley 13. While it may look difficult to approach, don’t worry. The owner will greet you with a friendly smile. He’s a really nice guy. The restaurant is a bit of a combination between a Japanese izakaya and a bar. Going in and just having a drink is fine, but they also have a great food menu if you want to have dinner there. But we highly recommend arriving hungry, because the menu at Enamiya Saku-no-ma has a plethora of choices. Their specialty is the teppan cuisine. Most of the dishes are made with pork, eggs, and yakisoba, and they are all made fresh and cooked to serve. They also have snacks to go with drinking like edamame and nuts. A plentiful variety of drinks is also available ranging from beer and sake to wine and umeshu.
1Recommended

Tonpei-yaki / ￥600
This is one of the shop’s specialties and it is cooked on the teppan (Japanese hot plate). It’s made by wrapping eggs and welsch onions in fragrantly cooked pork, and then topping it all with bonito flakes and sauce. The savory fragrant pork goes perfectly with the sweetness of the eggs. The fluffy texture of the eggs is another major feature of the dish. Adding mayonnaise adds another layer of richness. It comes to the table piping hot, and it should be eaten as soon as possible.
2Recommended

Niku-miso Lettuce Cha-han / ￥800
This dish is made by cooking ground meat with sweet and salty miso and using it to season the fried rice. The strong aroma has a big impact, and will really get your appetite going. The crunchiness of the lettuce takes the dish to another level. If you plan on trying other dishes, you can share this one between two or three people.
3Let's Try!

Omu-soba / ￥900
Like Tonpei-yaki this one is also prepared on the teppan. Yakisoba cooked with rice, also known as soba-meshi, is topped with a thin layer of soft-fried egg. You might think it’s weird to eat noodles and rice in the same dish, but they work really well together in this. Savor the aroma of the sauce when eating this dish.
4Let's Try!

Ika Ninjin / ￥400
This dish is made by taking thinly sliced squid and raw carrot and seasoning them in a soy sauce based marinade. This is a local dish. It is very strongly seasoned, and even has some Japanese sake for kick. The wonderful smells of soy sauce and sake fill the mouth with every bite. It goes great with beer or sake.
How to Order 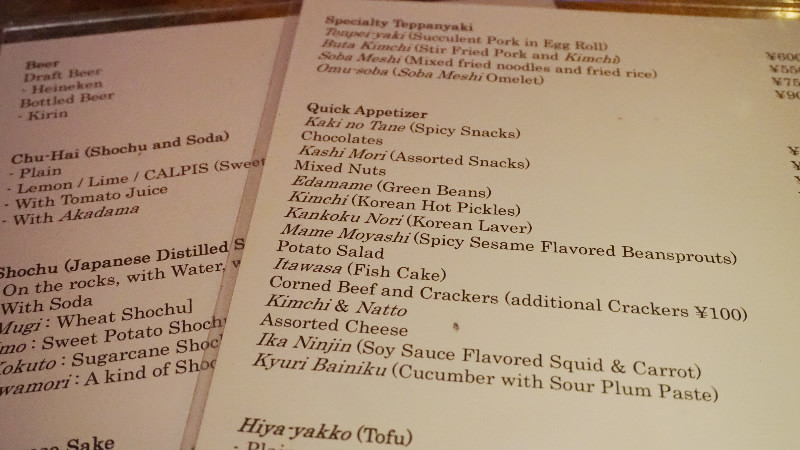 They have menus written in all English. If you have a question about a dish, the owner will gladly answer it. We highly recommend the Specialty Teppanyaki section of the menu. A party of 2-3 people should order about 4-5 dishes.