Due to COVID-19, some information contained in articles may be out of date. Please check with establishments directly or see their websites for up to date info.
Best Ramen in Kyoto
May. 14, 2019 UPDATE
Taiho Ramen - Kiyamachi store - 大豊ラーメン 木屋町店 -
Traveler Friendly
In general, no services provided in English.
Menu
Japanese only
Languages spoken
Japanese only
Downtown Ramen

- 大豊ラーメン 木屋町店 -
Traveler Friendly
In general, no services provided in English.
Menu
Japanese only
Languages spoken
Japanese only
Downtown Ramen
463 3 6.3 2 reviews
Basic information of Taiho Ramen - Kiyamachi store
Story & Recommendation
A rich shoyu ramen, the perfect post-drinks meal
Taiho Ramen is located an 8 minute walk from Hankyu’s Kawaramachi Station, and a 5 minute walk from Keihan’s Sanjo Station. Taiho Ramen’s specialty is a deep and richly flavored shoyu ramen, whose recipe has remained the same for years. Kiyamachi, where Taiho Ramen is located, is unique downtown area of Kyoto that boasts an array of tiny little whole in the wall spots, from coffee shops, bars, and international cuisine, to traditional Japanese-style restaurants. Quietly residing in one of these back streets and remaining beloved by the locals is, Taiho Ramen, which was established as the place to go for some post-drinks. As the people working nearby often drop by for a late night snack, Taiho Ramen is always busy, even late at night. While Kyoto is a big city, Taiho Ramen is perhaps the only ramen shop that’ll be packed to capacity at 1 in the morning. Also, because it is located in downtown, the shop doesn’t open for (business hours are 6:00pm to 6:00am). And since it’s in a back alley, it can be difficult to find, but that hideaway-like atmosphere is one of Taiho Ramen’s many unique characteristics. Once you step foot inside, you’ll feel the nostalgic atmosphere akin to many an old-fashioned ramen shop. Just as a side note, Taiho Ramen’s customers are mostly males of all different ages.
1Recommended

Ramen / ￥700
A Taiho Ramen specialtya good-ol bowl of Ramen. Taiho Ramen's Ramen is a rich shoyu ramen, prepared with a tonkotsu soup base, and finished with soy sauce. The rich body of the pork bone broth is very much present in the soup, which hits you with the sharp salty bitterness of soy sauce as it travels down your throat. When you grab a bowl of this ramen after drinking nearby, you’ll be treated to the experience of the amazingly pleasing kick of soy sauce washing over your slightly hazy tastebuds. The toppings are green onions, bamboo shoots, and pork char-siu. Only slightly fatty, the pork char-siu doesn’t carry much of an intense flavor at all, which means the solid umami flavors and texture of the meat have room to stand out.
2Recommended

Tokusei Char-Siu Ramen / ￥950
The Tokusei Char-Siu Ramen is a version of the above-mentioned Ramen, with a massive topping of additional pork char-siu. The huge slices of pork char-siu circle the bowl, and the anticipation of scooping the noodles from out of this well of meaty delight is just too much for words. While the visual impact alone is outstanding, this bowl is also satisfyingly filling and gets a ten out of ten for quantity. For those who want to satisfy themselves with the full Taiho Ramen experience, we definitely urge you to order the Tokusei Char-Siu Ramen. However, as you can see, it’s quite large, so we recommend this bowl to big eaters only.
3Let's Try!

Karaage / ￥450
A classic Taiho Ramen side dish, karaage (deep-fried chicken). Compared to regular karaage, Tiaho Ramen’s karaage is packed with juicy chicken meat and come in satisfyingly, not so bite sized pieces. Seasoned thoroughly, these pieces of fried chicken are enough to satisfy anyone just looking for a nibble to eat. And the fact that it’ll be immediately served, freshly fried, is another happy bonus.
4Let's Try!

Gyoza / ￥300
Another classic side dish, Taiho Ramen’s Gyoza. Taiho Ramen's Gyoza are a little smaller than regular gyoza dumplings, and as they are also only lightly seasoned, they are the perfect dish to pair with the deep and rich flavors of the ramen. On the counter top sits gyoza sauce and chili oil, which we urge you dribble over your Gyoza when eating. The chili oil is spicy, so make sure not to use too much.
How to Order 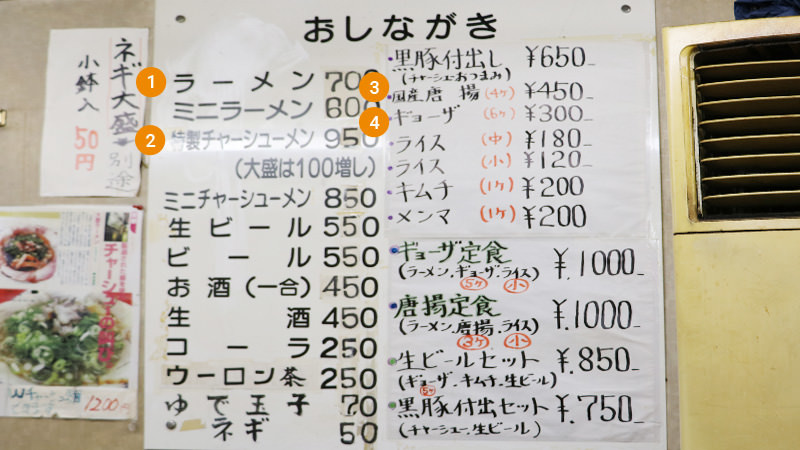 The menus are on the wall, so read those when ordering. Basically, no English is spoken here, but if you order by pointing at the items you want on the menu, the staff should be able to understand you.

If you would like to get a larger serving of noodles, you can ask for a large size serving(Omori) for an extra ￥100.

When you are ordering your ramen. A large size serving(Omori) for men should be just right, while a normal size serving(Namimori) will be appropriate for women.