- 鶴武者 -
Traveler Friendly
Simple English OK!
Menu
English
Languages spoken
Basic English
Downtown Ramen
1178 12 9.6 7 reviews
Basic information of Tsurumusha
Story & Recommendation
Ramen in a light chicken broth, topped with rare pork fillet
Tsurumusha is six minutes’ walk from Saiin station on the Hankyu line. The restaurant’s specialty is wholesome chicken broth ramen made using no chemical flavorings. This chicken broth is boiled for a long time, resulting in a lovely thickness and cloudy color. Tsurumusha’s soup is unlike ordinary chicken broth; the rich flavor of the chicken is preserved and the broth has a smooth, seafood-like taste almost like pescatore. One of the first things you’ll notice about Tsurumusha’s ramen is the brightly colored rare-cooked pork fillet. Lean shoulder roast is cooked thoroughly in a low-temperature oven, so the fillet is meaty but not oily, so you can enjoy the unadulterated flavor of the meat. Of course, the roasted pork fillet and the soup pair excellently. After opening its doors in 2012, the restaurant’s combination of delicious soup and an attention-drawing storefront soon caused a quite a stir, garnering popularity to take a seat as one of the most popular restaurants in the downtown area. While the restaurant draws a range of customers, it is particularly popular among women. As there is an English menu, tourists can drop by for a meal with peace of mind.
1Recommended

Ramen (add to roast pork) / ￥980
Tsurumusha’s specialty is Ramen (add to roast pork). The soup, noodles, and toppings: everything in this dish is all carefully chosen. The soup is made from a whole chicken (with the innards and wings removed), broiled for six hours, with seafood such as oysters, as well as chicken and pork bones added. The result is a highly condensed flavor that combines the deliciousness of both land and sea. Home-made curly noodles with a lovely firm texture are added to the broth. The toppings include bamboo shoots (sliced through for softness), a sprinkling of chillies to stimulate your appetite, crunchy leek and green onions, and a boiled egg which soaks up the flavor of the broth. With each ingredient chosen so carefully, you just know that this bowl of ramen is going to be delicious!
2Recommended

Wafu Ramen (add to roast pork) / ￥980
Kombu seaweed, cuttlefish and dried shiitake mushrooms are broiled in water, and dried bonito and mackerel flakes added to make this seafood broth Wafu Ramen. The chicken broth soup used in the Ramen above is also added for a faint chicken flavor that adds another layer to this seafood soup. Wafu Ramen has a strong “dashi” (Japanese stock) flavor and gourmet feeling. However, in my personal opinion, I think it’s best eaten not for lunch or dinner but after going out drinking, as the perfect finish to a long night out.
3Let's Try!

Dipping noodle (add to roast pork) / ￥1,080
If you want to get the maximum amount of pork fillet, you’d better go with the Tsukemen(Dipping noodle). “Tsukemen” is where, as with zaru-soba, a separate dipping sauce is provided with the noodles, and you dip the noodles in the sauce as you eat them. This dipping sauce is stronger than ordinary ramen broth. Tsurumusha’s Dipping noodles follow the rules of ordinary “Tsukemen”, but if you’re feeling up to the challenge, you can order a larger helping of rare pork fillet for a truly splendid Tsurumusha-style arrangement. While there are fewer ingredients than in the Ramen, the rare pork fillet flavor and the firm texture of the noodles really stand out. The correct way to eat Tsurumusha’s Dipping noodles is to first finish the noodles, and then mix a special kind of “dashi” (Japanese stock) with the remaining soup and drink it up.
4Let's Try!

Roast Pork bowl / ￥350
The roast pork fillet used as a topping for Ramen is scorched and placed on top of a hot bowl of rice for a delicious “don-buri” bowl dish. The pork is more well-done than that used for ramen, so it’s spicier and a little chewy. Once you have a taste, you’ll want more. If you’re a fan of garlic, definitely try eating this with a sprinkling of the fried garlic topping available at each table. It adds another layer of fragrant, spicy flavor and is even more delicious than the pork by itself.
How to Order 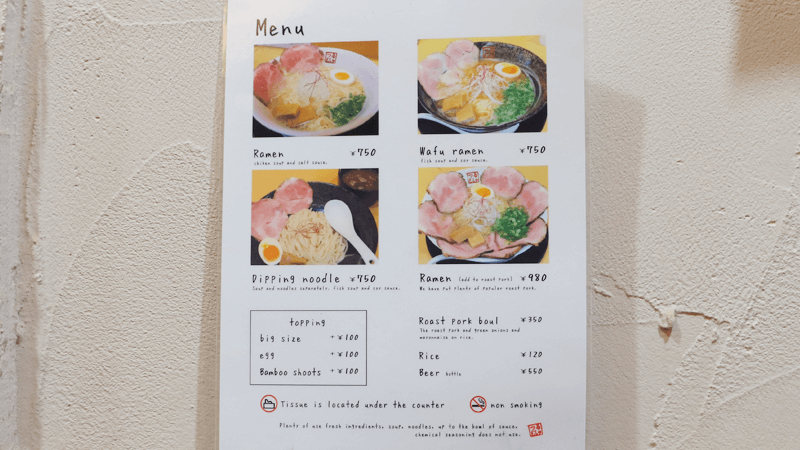 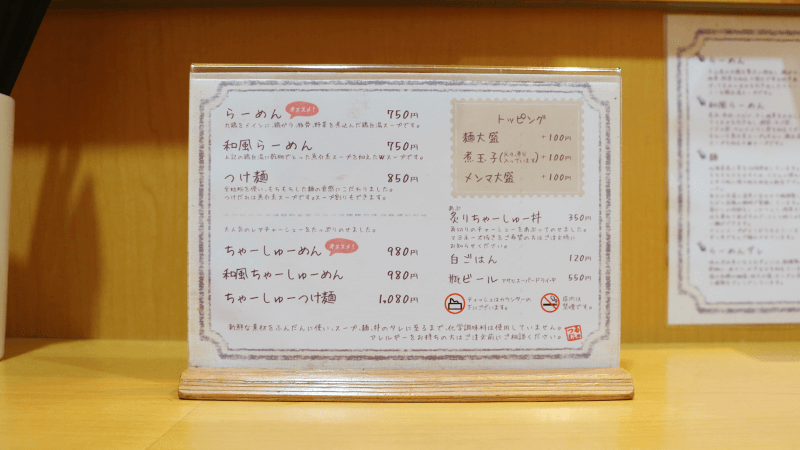 The menu items are written on placards on top of the tables. Customers can read these and place their orders. If you ask the staff in English, they’ll bring you an English menu, so placing your order is simple.