Due to COVID-19, some information contained in articles may be out of date. Please check with establishments directly or see their websites for up to date info.
Best Spanish in Kyoto
Aug. 10, 2017 UPDATE
ANTONIO
Traveler Friendly
The chef and staff can speak English and Spanish. They will kindly answer even small questions.
Menu
English, Spanish *Note that the English version of the menu is not up to date.
Languages spoken
English, Spanish
Imperial Palace & Teramachi Spanish

Traveler Friendly
The chef and staff can speak English and Spanish. They will kindly answer even small questions.
Menu
English, Spanish *Note that the English version of the menu is not up to date.
Languages spoken
English, Spanish
Imperial Palace & Teramachi Spanish
137 2 --- 0 reviews
Basic information of ANTONIO
Story & Recommendation
Fresh Seafood Paella Made by a Spanish Chef
The area around subway Kyoto Shiyakusho-mae Station is a bit far from Kyoto Station, but in this area you can find many new and hip stores and restaurants. One of them is Antonio, offering Spanish cuisine. The restaurant opened in 2003, and has such Spanish classics on its menu as paella. Their tapas menu is also extensive, and they have a nice selection of Spanish wines. Foodies are sure to be satisfied, and so are oenophiles. The clean interior, beautiful paintins reminiscent of Spain, all make the restaurant feel nicely out of place, like you were not in Kyoto anymore. Plus, the staff can speak English and Spanish!
1Recommended

Seafood paella / ￥4,500 for two servings / ￥9,000 for four servings
The seafood extract used on the rice makes this dish burst with umami. The rich taste and flavors of this dish are, oh, so great it makes you feel like you were back in Barcelona sipping some red wine as the sun is setting. There is some lemon on it too, giving it a nice zest. It takes some time to cook this dish so don’t hesitate on ordering it.
2Recommended

Garlic prawns / ￥1,300
The plump shrimp are served to you simmering, so be sure to eat them while they are hot. They are cooked with white wine and olive oil so the garlic is not overpowering. After eating the shrimp, be sure to dip some bread in the leftover sauce.
3Let's Try!

Marinated anchovies / Half ￥580 │ Full ￥850
It’s one of their popular tapas. Since it is served rather quickly, it’s perfect to snack with an alcoholic beverage. The distinctive flavors of the dish are the fresh aroma of the olive oil and sourness of the vinegar sauce. It’s not fishy at all because of how fresh the anchovies are. It goes well with not only beer and wine, but also sweet sangria.
4Let's Try!

Chilindron Lamb stew / ￥1,700
Chilindron is a Spanish regional dish in which meat, onions, tomatoes are simmered. At Antonio, it is cooked with lamb, which is often consumed in Spain. Dip the lamb meat in the sauce in which the umami tastes of the vegetables is condensed, and then eat it. The aroma of thyme adds an accent and it will stimulate your appetite. Have it with red wine.
How to Order 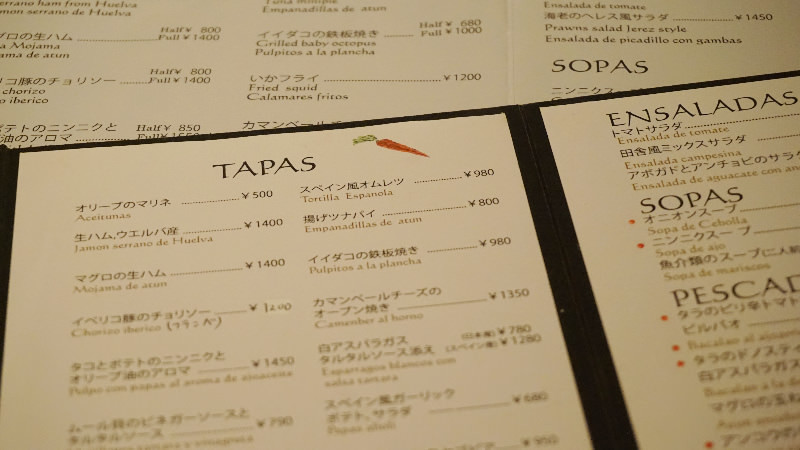 They have menus written in Japanese and Spanish. Although an English version of the menu is available, the details and prices of the dishes are not updated and they differ from the current details and prices. However, the staff can speak Japanese, Spanish, and English, so it may be a good idea to ask any questions you have when you place your order.

・There are various kinds of paella besides the Seafood paella. Also, since they serve you a generous amount, you may also bring home the leftovers if you become full.

・A table charge of ¥500 is charged per person, and bread and aioli sauce (garlic mayo) are served. ¥250 will be charged for seconds of aioli sauce.