- 野菜酒場 あしおと -
Traveler Friendly
Basic English
Menu
Japanese only
Languages spoken
Basic English
Downtown Casual Style Washoku
433 2 10 1 reviews
Basic information of Vegetable Bar Ashioto
Story & Recommendation
Ashioto – A Veggie Bar not Just for Vegetarians
Vegetable Bar Ashioto is a casual Japanese restaurant that opened its doors in the suburbs off Shijo-dori in June 2019. Brought to life by the friendly staff and colorful countertop vegetables, Ashioto provides beautiful original dishes of locally grown Kyoto veggies in a laid back casual atmosphere. In the olden days, because Kyoto is so far from the ocean, it became a hub for vegetable growers. And since the region is marked by four distinct seasons that include a hot and humid summer and bone-chilling winter, what came to be known as Kyoyasai grew to have unique flavors and aromas. With time, each season came to be known for specific Kyoto vegetables. Spring was bamboo shoots and Japanese ginger, summer, fat kamo-nasu eggplant and manganji peppers, autumn, Kujo leeks and Horikawa burdock, and finally, winter, shrimp shaped ebi imo taro and mizuna. With so many different Kyoyasai, if you’ve been to Kyoto, you’ve likely had at least one of them. Stepping inside the renovated Japanese townhouse that houses Ashioto, you’ll be greeted by a sprawl of fresh veggies and owner Maeda. Every morning, Maeda gets up and heads out to farmers and local grocers to pick up the day's seasonal vegetables. While Maeda’s dishes are so incredibly unique because of these deep relationships with the farmers, relying on what’s available each day also means that the menu has and will change regularly. Also, it’s not only the veggies that change either. Maeda also likes to branch out from his Japanese roots and use whatever veggies on hand to dabble in other cuisines as well, including Chinese and Spanish. However, you’ll also find simple, unfettered dishes of straight-up cooked vegetables as well. Additionally, as Maeda tries his best to keep everything local, even Ashioto’s teas are from Kyoto, specifically the southern Kyoto city of Uji. While Ashioto offers mainly vegetable-based dishes, each one provides enough to satisfy even the biggest stomachs. Ashioto serves up truly delicious dishes made from truly delicious seasonal ingredients, so trust Maeda’s recommendations and your stomach and give as many things a try as you can!
1Recommended

Manganji Peppers and Shrimp Tempura / ￥800 (excl. tax)
This impressive and popular tempura platter features not only pork and chicken inside the tempura but the Kyoto summer vegetable of manganji pepper. Manganji peppers are similar to green peppers and lack almost any spice (you know you've got yourself a good one if it's spicy). While green is the most common color, when the peppers are left until later in the season, they begin to turn red. When you bite into the shrimp tempura, you'll be met with not only the satisfying sound of the batter crunchy batter under your teeth but the meaty juices of the pork and chicken mince that jackets the shrimp. Also, don't forget to try your tempura with the accompanying salt and uncommon manganji pepper yuzu kosho.
2Recommended

Burdock and Fried Eel on Rice / ￥1,800 (excl. tax)
This dish features a fat piece of eel tempura laid atop a bed of clay pot rice and burdock cooked in soy sauce. While the eel tempura provides a crunchy texture and beautifully soft center, the burdock and ginger offer a fantastic aromatic accent. For anyone who's ever tried it, this dish has a similar flavor to Nagoya's signature eel and rice dish, Hitsumabushi. Also, with Hararyoukaku black shichimi seasoning and dashi stock offered on the side, this dish can be enjoyed in as many ways as you can think. While it's only a single serving and not overly big, if you happen not to be able to finish it, the staff will kindly roll it up into a rice ball for you to take home. So even if you're not sure you can finish it all, it's definitely worth ordering to at least just try. *As the rice and burdock are cooked inside a traditional clay pot, the dish takes quite a bit of time to prepare, so it's best to order early than later.
3Let's Try!

Tofu and Eggplant Mapo / ￥850 (excl. tax)
This hybrid mapo contains both tofu and eggplant. Cooked in a clay pot, this dish comes out piping hot and stays hot until the very last bite. With the perfect level of peppery spice, and aroma and punchy tingliness from the Sichuan pepper, this dish will not only have you reaching for seconds but also wishing you had a glass of sake and bowl of rice to go along with it too. Although it's technically part of the secret menu, Ashioto will throw in a bowl of rice for free as well if you ask, so if you're feeling that the mapo on its own isn't quite hitting the spot enough, then go ahead and get a bowl of that sweet fluffy white stuff, rice.
4Let's Try!

Organic Lemon Sour / ￥650 (excl. tax)
Ashioto’s organic lemon sour features half an affectionately grown pesticide-free locally sourced lemon from one of the agriculture centers of Kyoto, Joyo City. The pulp of the lemon provides an incredible texture that literally bursts in your mouth. And while the lemon still hits you with its signature lemony bite, it lacks any overpowering sourness and offers the drink more of a fruity flavor than anything.
How to Order

As all vegetables are seasonal, the price and available ingredients change accordingly.

While we have showcased mostly dishes available year-round, there are a few seasonal vegetables, which may not be available, included as well. If any of the veggies lining the counter pique your interest, try ordering them and see what kind of unique and exciting dish comes out. 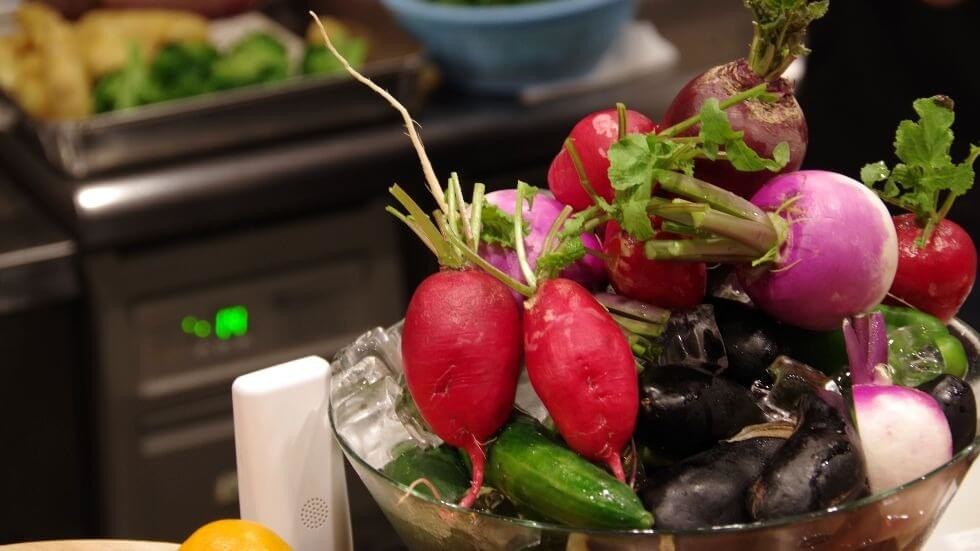 For those without much knowledge of seasonal Japanese vegetables and those who just want whatever’s recommended, there’s the omakase course for ¥3,500 (excl. tax).