Best Bars / Pubs in Kyoto
Mar. 11, 2020 UPDATE
Beer Komachi - ビア小町 -
Traveler Friendly
There are many hotels by the pub and it’s just easy to get there. It’s no wonder this pub is popular with foreign visitors.
Menu
Japanese and English.
Languages spoken
Simple English.
Gion & Kiyomizu Temple Bars / Pubs

- ビア小町 -
Traveler Friendly
There are many hotels by the pub and it’s just easy to get there. It’s no wonder this pub is popular with foreign visitors.
Menu
Japanese and English.
Languages spoken
Simple English.
Gion & Kiyomizu Temple Bars / Pubs
189 1 --- 0 reviews
Basic information of Beer Komachi
Story & Recommendation
Beer Komachi is a pub on Furukawa-cho Shopping Street that offers seven types of beers on tap
Furukawa-cho Shotengai is a covered shopping street close to subway Higashiyama Station. A few years back the shopping street was in decline, and many of the shops on it had closed their doors. But now the shopping street has gone through a renaissance, and there are more and more trendy pubs and restaurants on it. Beer Komachi is just one of them, and once you go through their clear plastic curtains, you get to a pub with a warm atmosphere and wooden tables and seats. This pub puts a lot of effort into their beer list, and they usually have seven types of beers on tap. They also have many types of food items on their menu too, like Kyoto-style tofu pizza, smoked appetizer platters, and all of them are thought out to go well with the drinks. They also have sake and wine, so there’s nothing to complain here!
1Recommended

7 types of Japanese beers / UK Half: ￥600-700 (including tax) US Pint: ￥950-1080 (including tax)
You can choose from seven Japanese beers on tap. The beers on the pictures are, from the left, Ushitora Brewery’s #202 from Tochigi, Daisen G Beer Weihen Hop from Tottori, and Be Easy Brewing’s Keyagu no Inu from Aomori. No matter whether you like fruity light beers, or beers with a more hoppy and grainy taste, they are sure to have something you like.
2Recommended

Kyoto-style tofu pizza / ￥650 (including tax)
This pizza has no crust: it has its topping on top of deep-fried tofu. The tofu is crispy on the outside and soft inside, and on top of it you have a copious amount of cheese and some tomato and green onion too. This is something rather special that you can’t have elsewhere!
3Let's Try!

Smoked appetizer platter / ￥870 (including tax)
This is the classic dish to have at Beer Komachi. You have on the plate smoked mackerel, cheese, duck, egg, edamame-beans, pork liver, and chicken cartilage. The smoking process makes the taste really strong! Eating this, it’s hard not to empty your pint. I especially want to recommend the cheese and pork liver, they are both good and have a rather special, smoky taste to them.
4Let's Try!

Crackers with seaweed cream cheese / ￥540 (including tax)
It was a great idea to mix salty kombu seaweed into cream cheese, as the saltiness goes really nicely with the sweet sourness of the cheese. Biting into the cracker, you first get an almost overwhelming creamy taste, but the seaweed soon comes to rescue, making sure that everything is in balance. And of course you have the crunchiness of the cracker to make sure that you just have to order another pint.
How to Order 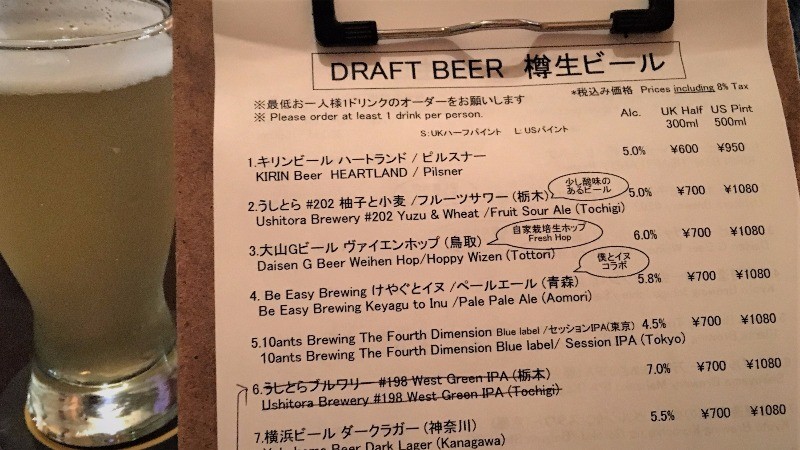 Choose your beer, and then choose if you want the UK half size or US pint size. The menu is in English which is nice.

Choose your beer, and then choose if you want the UK half size or US pint size. The menu is in English which is nice.