Traveler Friendly
All staff members can speak English, so it feels super welcoming.
Menu
English
Languages spoken
English
Kyoto Station Bars / Pubs
900 14 10 1 reviews
Basic information of Kyoto Beer Lab
Story & Recommendation
Home Brewed Kyoto Craft Beer on the Bank of the Takasegawa River
In March 2018, the craft beer bar “Kyoto Beer Lab” opened their doors in Shichijo – a quiet area just outside the hustle and bustle of downtown.
For the sake of the development of Kyoto’s Wazuka area, the owner of Kyoto Beer Lab, Mr. Muragishi, decided to embark on a new endeavor to utilize an abandoned house and develop a beer with tea from the town of Wazuka.
With help from local tea farmers and after half a year of trial and error, Kyoto Beer Lab finally succeeded in creating a beer that recreated the aroma of tea leaves. Since then, they have been offering novel tea/beer hybrids, such as the “Green Tea Ale,” “Roasted Tea Stout,” and “Kabuse Tea White Ale.”

The pictures from the famous Chōjū-jinbutsu-giga picture scrolls that are printed on each glass look super cool while still sticking to the bar’s roots and giving off tranquil Japanese vibes.
Kyoto Beer Lab gained permission from the Kouzan-ji Temple – which is home to Japan’s oldest tea farm and houses the Chōjū-jinbutsu-giga – after they thought they would like to use the famous pictures in their bar.
After gaining permission, they went ahead and made the glasses, each of which is a testament to owner Muragishi’s will to create a unique and awesome experience.

On the food side of things, Kyoto Beer Lab offers a range of dishes that cater to both vegans and vegetarians alike.
Also, to make sure everyone’s having a great time; Kyoto Beer Lab plays the best beats around the clock.
This place is truly heaven for anyone wanting to chill out to some sick beats while sipping on absolutely fantastic Kyoto craft beers.

Tasting Set (Your Choice of 3 Beers) / ¥1,400 (inc. tax)
With Kyoto Beer Lab’s Tasting Set, you can pick your choice of three beers from their lineup of eight different craft beers. In the picture, we have the Green Tea Ale on the left, the Golden Boyz in the center, and the Party on Merk on the right. The Green Tea Ale has a great hoppy aroma, and features the combination of fantastic malty flavors with the bitterness of green tea; truly a great pick to enjoy the flavors of a tea/beer hybrid. The Golden Boyz is set apart by its fruity aroma and bitter flavors from the hops. This golden ale has an awesomely refreshing flavor, and as its name suggests, a beautiful golden hue. Party on Merk has a characteristically high ABV with a strong hoppy bitterness. This beer is perfect for those wanting to enjoy both the gorgeous aroma, as well as the bitterness of hops. We recommend the Tasting Set to anyone who can’t decide what to choose or anyone who wants to have some fun with comparing and contrasting the different flavors this fantastic local brewery has to offer.
2Recommended

Left: Red Light Runner / Right: Wasabi Salt Gose / ¥1,000/Pint・¥1,000/Pint (inc. tax)
The dark brown Red Light Runner is set apart by its aromatic flavors and strong bitterness. The hoppy aroma and bitter flavors strike an exquisite balance goes down like a treat. The very Japanese Wasabi Salt Gose is made with a combination of salt and lactic acid bacteria (which is found in things like the Yakult) in addition to the wheat germ, which results in quite a sharp acidity. Nevertheless, it’s a super refreshing beer that can be appreciated most when downed on a warm summer’s night. Beers come in two sizes, Half (¥700 Inc. Tax) and Pint (¥1000 Inc. Tax)
3Let's Try!

Mixed Platter B (Fried Potatoes, Sausages and Bacon) / ¥700 (inc. tax)
No matter who you are, we know you love fried potatoes, and these ones are especially good, with their irresistible crunchy batter and fluffy, potatoey center. The Mixed Platter B also features a good helping of sausages, that are simply made for the beer. With a good chew to them, these sausages are juicy, delicious and pack a pretty powerful peppery punch. The thick-cut bacon – made with meat from the famous Kyoto Yakiniku BBQ restaurant “Hiro” – is perfect for those wanting to enjoy some meaty flavors. All together this is the perfect platter to have over some beers.
4Let's Try!

Red Wine Soybean-meat Stew (Vegan) / ¥670 (inc. tax)
Kyoto Beer Lab offers an entire menu aimed at vegans, with their most popular dish being the Red Wine Soybean-meat Stew. Using soybeans in place of meat, Kyoto Beer Lab have managed to make a dish that not only mimics the texture of meat but the look of it too. Not only that but the stew tastes amazing too. Kyoto Beer Lab offer a range of other vegan dishes in addition to the stew, so definitely check them out if you can! *A vegetarian menu is also available.
How to Order 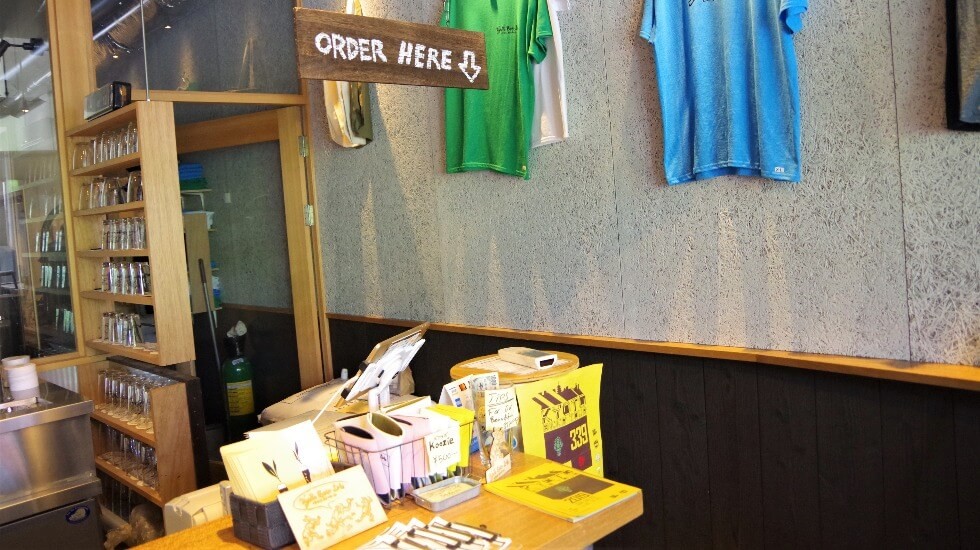 When you enter the bar, there is a cash register to the right of the counter and place your orders where the sign says “ORDER HERE.” 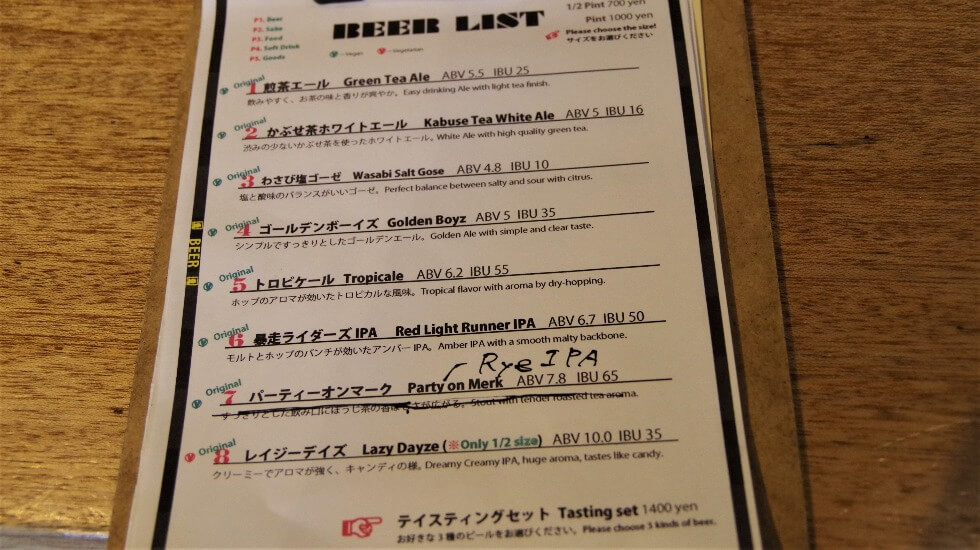 The menu also has English, as well as explanations of ABV and IBU too.

At Kyoto Beer Lab you pay when you order your food and drinks, and after you’ve paid, just slide to the left and wait for your order. 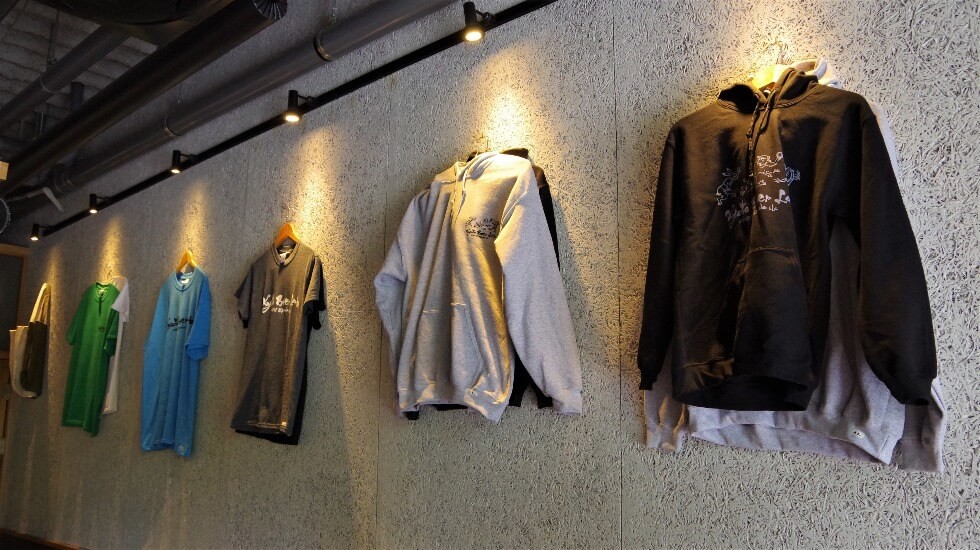 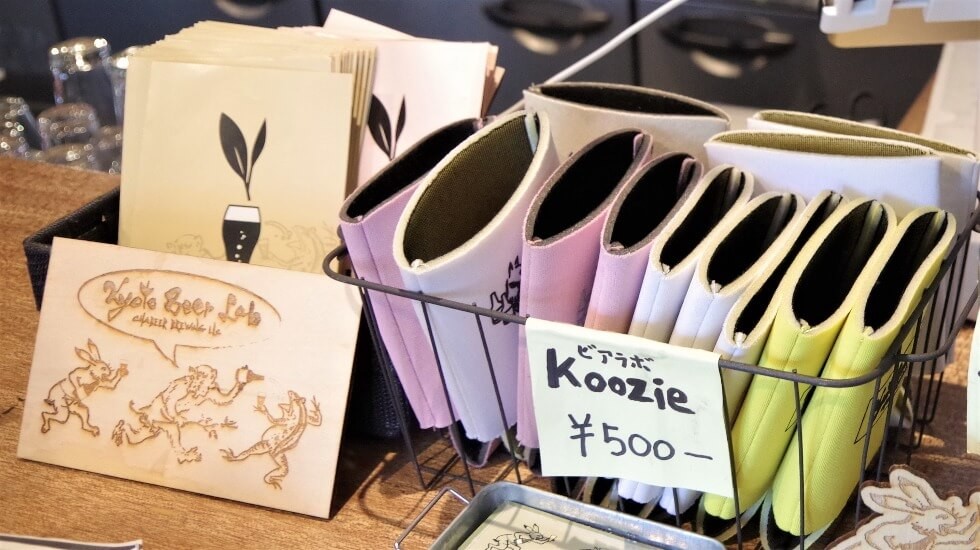 It isn’t just their beer glasses; Kyoto Beer Lab also have a range of goods that feature the designs of the Chōjū-jinbutsu-giga that are perfect for taking back home as a souvenir.