Best Bars / Pubs in Kyoto
Jan. 20, 2023 UPDATE
Before 9
Traveler Friendly
The menu in English and craft beer! What more do you want?
Menu
Japanese and partially in English.  ※Sake menu is only available in Japanese.
Languages spoken
Simple English.
Downtown Bars / Pubs

Traveler Friendly
The menu in English and craft beer! What more do you want?
Menu
Japanese and partially in English.  ※Sake menu is only available in Japanese.
Languages spoken
Simple English.
Downtown Bars / Pubs
830 9 8.3 1 reviews
Basic information of Before 9
Story & Recommendation
Before 9 offers you a great selection of craft beer and sake in a machiya town house
Before 9, a craft beer pub, can be found close to the Manga Museum on Karasuma Street. The atmosphere inside the pub is somewhat nostalgic and warm, but at the same time, the pub also feels very modern. Their main beers are the craft beers by Kyoto Brewing Company, but they also have other craft beers from all over Japan. They also have some great sakes available like Okurihama by Shimomura Brewery and Shichihonyari by Fujita Brewery. Besides the drinks, they also have around 20 dishes on their menu that go great with the beer. So, have some great tasting craft beer with fried chicken spiced with Japanese pepper and off you go into the night of Kyoto!
1Recommended

Ichigo Ichie / Black IPA / Medium ￥900
Among the 8 craft beers they have, this time we ordered a glass of Ichigo Ichie and Sierra Nevada Black IPA. Ichigo Ichie from Kyoto Brewing Co. blends Belgian yeast with hops from the United States and New Zealand to make the Saison-style beer. The taste is dry but still fruity, and great for summers. With the Black IPA, there is a bit of fruitiness to the taste, but it has a richer taste and a smoky aftertaste. The beers can be ordered in small, medium, or big glasses.
2Recommended

Okurihama Junmai Ginjo / ￥850
The best way to get through these hot summer days in Kyoto is by drinking some sake. And Okurihama by Shimomura Brewery is a great choice. The taste has a bit of sweetness to it, but it’s still quite dry, and goes down really well, especially if you have some snacks to have with it.
3Let's Try!

Fried chicken with Japanese pepper / ￥700
Fried foods go the best with beer. And their fried chicken with its crispy skin is a surprisingly refreshing dish to enjoy with a beer. When you bite into the juicy chicken, it’s over. You can’t stop anymore. Another pint, please!
4Let's Try!

Carrot salad / ￥500
This carrot salad with watercress is a great way to refresh your palate after you had the fried chicken. The salad dressing has sesame oil and vinegar in it, making the salad taste a bit sour, making it even more refreshing. Make your night out a healthier one!
How to Order 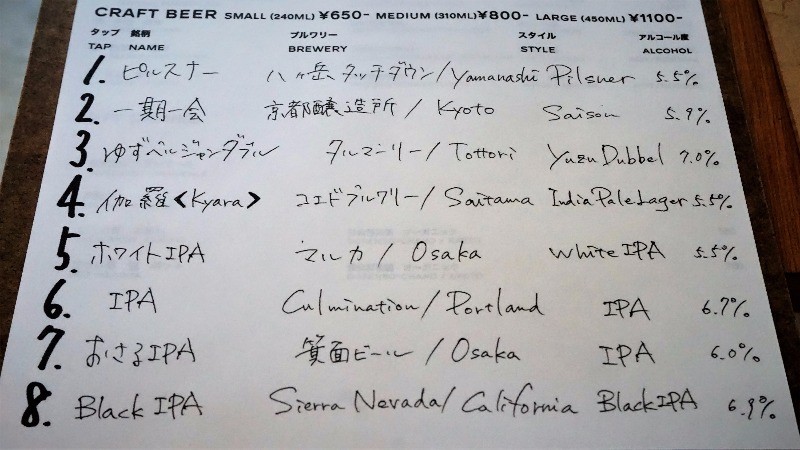 They have English on their menu too, so it’s easy to order even if you don’t know any Japanese. They have three beer sizes, small, medium, and big. You need to pay after ordering.

They have eight types of beers on offer, but if you are a true beer connoisseur how about trying all of them!