Due to COVID-19, some information contained in articles may be out of date. Please check with establishments directly or see their websites for up to date info.
Best Bars / Pubs in Kyoto
Sep. 24, 2020 UPDATE
CRAFTMAN
Traveler Friendly
Their menu is mostly in English, and the staff can speak English, plus many customers also come from overseas, so this is a very foreigner-friendly pub.
Menu
Japanese and partially in English.
Languages spoken
Simple English.
Downtown Bars / Pubs

Traveler Friendly
Their menu is mostly in English, and the staff can speak English, plus many customers also come from overseas, so this is a very foreigner-friendly pub.
Menu
Japanese and partially in English.
Languages spoken
Simple English.
Downtown Bars / Pubs
198 5 7.3 1 reviews
Basic information of CRAFTMAN
Story & Recommendation
Drink 25 types of Japanese craft beers at Craftman and be merry
On the always busy Karasuma Shijo Street, you can find a pub with the most Japanese craft beers on offer in Kyoto. If you are not careful when looking for the place, you may not notice it; it looks so chic you wouldn’t at first believe it is a pub! After you go in, you see the many taps on the wall, making the pub feel almost awe-inspiring. On the first floor you can find the bar counter, and on the second and third floor, you have tables. The atmosphere is charming and just perfect for you to enjoy a pint with your buddies. Most of the food here is in Italian style with a lot of attention put into how the dishes go with beer. They have all types of beer, like beer that tastes like Earl Grey, and surpasses the limits of ordinary beer. Even if you are a demanding beer connoisseur, Craftman in Kyoto is sure to be a place where you can find a beer to your liking!
1Recommended

Gougin and Kijo Ale / Large：￥1050 / Medium：￥950
Gougin is the name of a famous rice brand in Tottori, and the beer is brewed using sake yeast. The beer’s specialty is in the sweet smell of rice it has, and in its refreshing, but a bit sour taste. Because there is a kind of sweetness to the beer, you almost feel like you were drinking sake. The Kijo Ale by Kuninocho Brewery in Takatsuki, Osaka, is also made using sake yeast, but it has a fruitier taste and it is great for women and for a summer drink.
2Recommended

Earl Grey beer / Medium：￥850
It is a bit hard to think of the citrusy flavor of Earl Grey and beer coming together. The taste is not too strong, but almost like lemon tea with soda, and for the inexperienced, this beer is a great gateway to the world of beer. Because the taste really reminds you of tea, it is easy to drink it all in a few sips!
3Let's Try!

Crispy octopus / ￥680
It goes without saying that fried food goes well with beer. The crispy octopus is not too fatty, but has just the right amount of batter and tastes fresh. The taste of the octopus has a little bit sweetness to it, and a nice chewiness, you get more flavor with every bite. If you dip it in the sea salt you get with it, the taste of the octopus stands out even more.
4Let's Try!

Bacon and gorgonzola pizza / ￥1,280
This pizza with a thin crust has a nice, fragrant taste to it. It is topped with gorgonzola and together with the creamy taste of the cheese you also get the salty umami of the bacon. While the bacon is a bit fatty, it’s also so juicy that I’m sure that you will be shouting for another pint of beer after you have had a bite of this delicious pizza.
How to Order 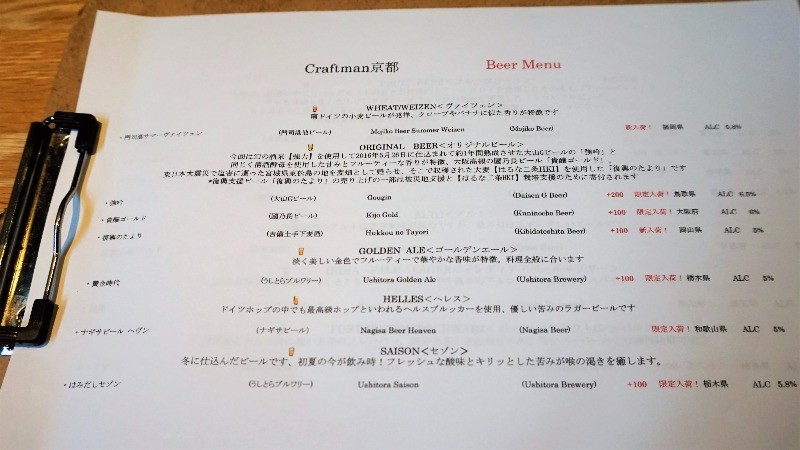 On the menu, they also have some English, so it won’t matter even if you don’t know any Japanese. The staff can also speak English, so just choose the beer and dishes you want, and you are ready to go. There are three beer glass sizes, small, medium, and big. If you are drinking by the bar counter, you need pay after ordering.

Because there are so many choices it can be hard to decide what to order, but you can ask the staff, or have a set of three small glasses of beer for 1,500 yen. This way you get to enjoy three different kinds of beer for a very reasonable price.