Due to COVID-19, some information contained in articles may be out of date. Please check with establishments directly or see their websites for up to date info.
Best Cafes in Kyoto
Aug. 24, 2020 UPDATE
SANTOMI CENTER - 三富センター -
Traveler Friendly
In addition to English menus, the friendly staff will also be able to speak to you in basic English.
Menu
English
Languages spoken
English
Downtown Cafes

- 三富センター -
Traveler Friendly
In addition to English menus, the friendly staff will also be able to speak to you in basic English.
Menu
English
Languages spoken
English
Downtown Cafes
163 2 --- 0 reviews
Basic information of SANTOMI CENTER
Story & Recommendation
Overseen by a World-Renowned Barista, SANTOMI CENTER Connects People Through a Love of Coffee and Art
SANTOMI CENTER is as its name suggests, a coffee shop at the center of Sanjo-dori and Tominokoji-dori streets. The name SANTOMI is derived from the SAN in Sanjo-dori, a street located close to the Karasumaoike subway station, while TOMI is taken from the first part of Tominokoji-dori street. The CENTER part of the name – along with the literal meaning of being at the center of these two streets – also signifies the fact that this place is a center for people to connect and communicate. SANTOMI CENTER is overseen by Hiroshi Sawada, the owner barista of Sawada Coffee in Chicago. In 2008, Sawada became the first Asian World Champion Barista of "Latte Art World Championship," held in Seattle. SANTOMI CENTER is set apart by its unique offering of coffees only found here, such as "HOMEMADE CHEESE COFFEE" and "SAWADA STYLE LATTES." In addition to their dedication to quality and unique menu items, SANTOMI CENTER is also home to a highly valued White Eagle espresso machine, one of only two in the whole of Japan. They also painted it the same scarlet red as Shinto torii gates, in the image of Kyoto, making it truly a one of a kind. For the interior of the cafe, SANTOMI CENTER decided to pay homage to the building's past life as a hair salon and created a stylish space with large mirrors and a barber's pole outside. However, although the cafe may be modern and stylish, SANTOMI CENTER also made sure to add uniquely Japanese aspects to the cafe to make it homely for not only customers from overseas but Japanese customers as well. These Japanese design aspects help bring a relaxed atmosphere to the cafe and include things such as an indoor/outdoor Engawa-style bench and a Kamidana household altar. SANTOMI CENTER is run by an event planning company, so originally opened with the intention of being home to art not often seen in cafes and somewhere with new, people connecting values. In order to realize this, artworks are displayed throughout the café, and an art gallery was opened on the second floor. Additionally, the large windows in front of the Engawa bench also feature cool drawings by both the staff and the artists who display their pieces in the upstairs gallery. All these aspects lend to the overall feeling of art that the café was going for. SANTOMI CENTER is a wonderful little coffee shop that perfectly balances the atmosphere of a café with that of an art gallery. We recommend both those looking for authentic full-bodied and rich coffee, and those interested in trying something new and unique, to check out SANTOMI CENTER!
1Recommended

HOMEMADE CHEESE LATTE (Iced) / ￥600 (Inc. Tax)
The HOMEMADE CHEESE LATTE is an original SANTOMI CENTER drink which uses a homemade cheese cream. The idea was born out of deliberations between Hiroshi Sawada and staff when they were first opening the cafe. Hiroshi Sawada holds the title of Chevalier in the French cheese society of Chevaliers du Taste Fromage de France and was especially particular about the cheese used in this drink. Apparently, he works every day to develop the homemade cheese and find one that goes perfectly with the coffee. The HOMEMADE CHEESE LATTE is the evolution of the original "HOMEMADE CHEESE COFFEE," – a day one hit, and now is a staple of SANTOMI CENTER. The large helping of thick and creamy lemon cheesecake-like homemade cheese cream fits perfectly with the full-bodied flavors of the crisp latte. The added accent of rock salt also helps to round out the flavors. At SANTOMI CENTER, several items make use of cheese creams; however, the exact copisition differs from drink to drink. Each cheese is worked on to find the best balance of sweetness and acidity for each specific drink. Also, don't forget to check out some of the other original cheese drinks, such as the "HOMEMADE CHEESE MATCHA LATTE" either!
2Recommended

SAWADA STYLE LATTE / ￥600 (Inc. Tax）
SAWADA STYLE LATTE is the signature drink of Hiroshi Sawada, who runs another cafe in Chicago called " sawada matcha " which is centered around matcha and hojicha tea. The drink is the combination of a rich, full-bodied latte with high-quality, locally-sourced Uji matcha. Both coffee and matcha have intense flavors and aromas, so at first glance, they would seem to not go well with each other. However, that image will completely change with the first sip of this latte. The aromas of the matcha and coffee are impressively well suited for each other, while the distinct flavors of the coffee and mellow bitterness of the matcha still manage to prominently stand out. The ability to customize the latte with the likes of soy and almond milk is also one of the reasons this drink is so popular. We highly recommend this drink to those who love matcha but are a little averse to coffee, and those who want to enjoy matcha while in Kyoto, the matcha capital of the world.
3Let's Try!

Lattee (Hot) / ￥500(Inc. Tax）
SANTOMI CENTER's LATTE uses "Sawada Coffee" beans, a slightly dark roast with notes of chocolate and a rich yet slightly sweet acidity. This latte is the combination of beans which have been carefully selected to match the milk, and silky, delicately steamed milk. It’s amazingly light and easy to drink, while still giving you a sense of the intense aromas of the coffee and sweetness of the milk. Additionally, the beautiful final touch of latte art poured right in front of you shows just how well balanced the espresso and milk are. The simplicity of this drink gives you the chance to enjoy the incredibly high level of skill brought forth by the SANTOMI CENTER baristas whom all continue studying and improving under the supervision of Hiroshi Sawada.
4Let's Try!

LATTE SOFT SERVE / ￥500 (Inc. Tax）
This LATTE SOFT SERVE has both the rich aroma of coffee and the sweet flavors of milk, and is absolutely irresistible on a hot Kyoto summer day. Although the soft serve is coffee-flavored, it still has a robust sweetness, making it great for not only coffee lovers but those with less mature palates as well. As a final touch, a dusting of espresso powder is sprinkled on top, giving the soft serve overall notes natural coffee flavors and aromas. SANTOMI CENTER were even picky about the cone that was used and went with a cocoa-flavored waffle cone that contrasts beautifully with the soft serve. All in all, this LATTE SOFT SERVE is at a level of quality that can only be reached by such a stunning coffee shop, and is a definte must-try.
How to Order 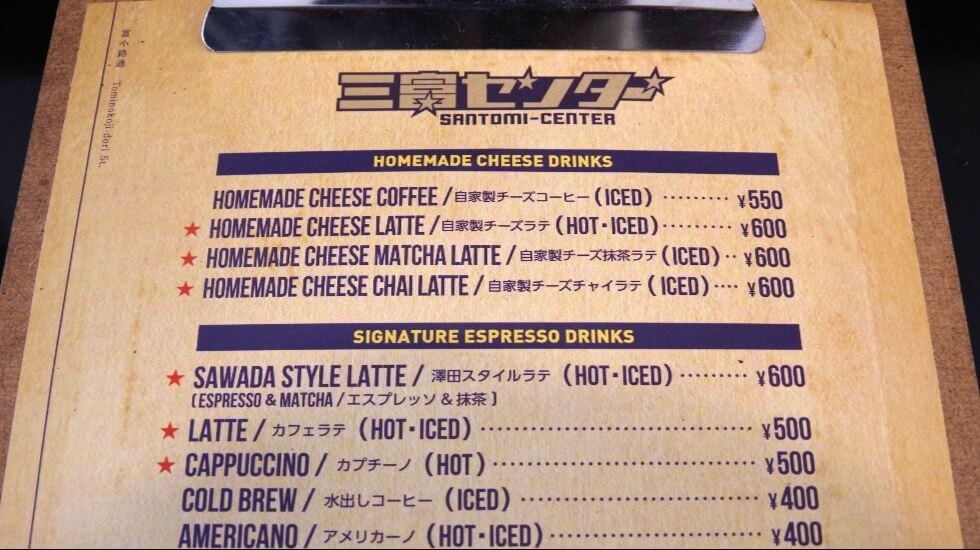 SANTOMI CENTER’s menu is in English as well, so you can also order just by pointing at what you want.

Additionally, SANTOMI CENTER will comply with any specific requests you have, such as changing the milk to low fat, no-fat, soy, or even almond.

Some of the baristas have experience studying overseas, so feel free to let them know what flavors you like and they will give you suggestions in English.

You can also feel free to relax on the Engawa-style bench, enjoy the free wi-fi, and even play with the old Japanese toys known as “Kendama.” 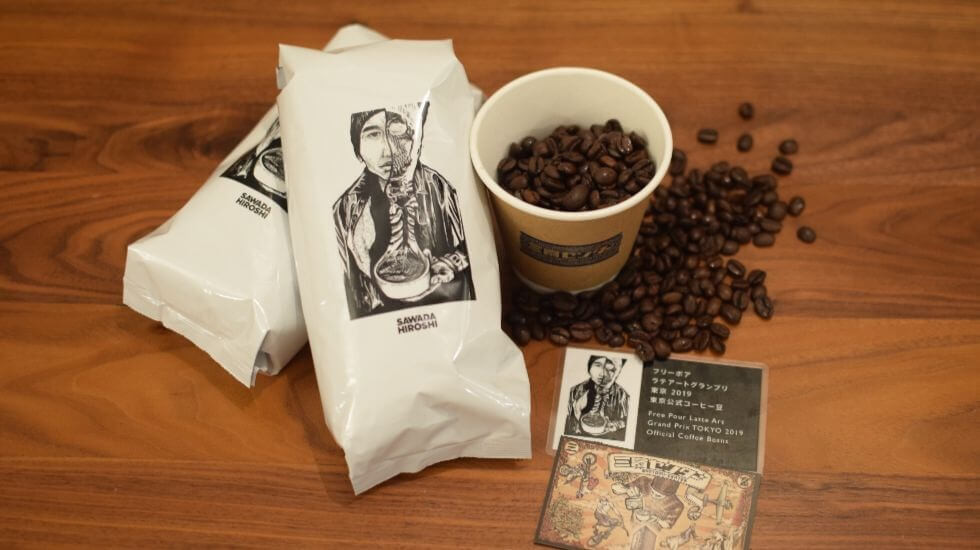 SANTOMI CENTER sell highly selective Sawada Coffee beans in-store, which are the beans they use in their coffees.

When enjoyed black, such as, as espresso or pour-over, Sawada Coffee gives off intense flavors reminiscent of dark chocolate and nuts.

When paired with milk, these flavors transform to give rich caramel and milk chocolate-like notes.

If you enjoyed SANTOMI CENTER, why not pick up some of the beans as a souvenir as well?