Due to COVID-19, some information contained in articles may be out of date. Please check with establishments directly or see their websites for up to date info.
Best Soba Noodles in Kyoto
Nov. 15, 2018 UPDATE
Honke Tagoto Sanjo-Teramachi main store - 本家 田毎 三条寺町本店 -
Traveler Friendly
Tagoto has an English menu and have staff who can speak basic English in the restaurant every day, so you don’t need to worry about Japanese here.
Menu
English
Languages spoken
Basic English
Downtown Soba Noodles

- 本家 田毎 三条寺町本店 -
Traveler Friendly
Tagoto has an English menu and have staff who can speak basic English in the restaurant every day, so you don’t need to worry about Japanese here.
Menu
English
Languages spoken
Basic English
Downtown Soba Noodles
500 3 7.0 1 reviews
Basic information of Honke Tagoto Sanjo-Teramachi main store
Story & Recommendation
A soba noodle restaurant in business since the beginning of the reign of Meiji the Great
It was the first year of the rule of Meiji the Great when this restaurant, Tagoto Sanjo, was founded. Japan was modernized during this period, but traditions were also not let go. This can be seen at Tagoto; soba noodles are served in traditional Japanese style, with small hints to modernity and change – though lately these hints seem to be getting stronger. There is a garden in the back of the restaurant, and you can gaze at the garden if you choose to sit on the Japanese style seats. Especially worth a mention is their spicy ebi-taiko, seasoned pollock roe and shrimp in thick broth. It is easy to get to Tagoto from subway Kyoto Shiyakusho-mae station; just enter the Sanjo shopping arcade and you are bound to find the restaurant. It is also interesting to note that Tokyo is considered to be the “home ground” of soba, and that the fifth and sixth generation chefs both learned noodle making in Tokyo. Though I dare to say they may have already surpassed Tokyo with their spicy ebi-taiko.
1Recommended

Spicy Ebi-Taiko / ￥1,170
The pollock roe and shrimp is a divine combination when put together. The flavor is really strong for soba; in fact sometimes you get ramen that has a lighter taste than this dish. The taste of the pollock roe is truly something special, so special in fact that it is a little hard to describe it in words. Although my opinion on this matter may be considered sacrilege, in this soba this there is something foreign, especially when you add some yuzu citrus shichimi on the soba the taste starts to faintly remind me of Thailand, which is not at all a bad thing. This dish made me like soba even more than I did before, opened my eyes to soba’s potential, since while the taste is strong it you can still taste buckwheat – even more than in some other soba dishes. This dish is a modernization of soba, but at the same time it does not let go of tradition.
2Recommended

Kamoseiro / ￥1,490
Kamoseiro, or duck soup with soba, comes with a hot duck broth and cold noodles on a zaru, or a bamboo sieve basket. This basket is a bit special here; you get your soba in a “double-decker” basket, so soba on the lower part will stay moist while you eat the soba on the upper part making it possible for you to enjoy the soba even more. This style of soba is from the eastern side of Japan, but this dish was arranged to Kyoto style by the sixth generation chef. There is definitely something Kyoto in the broth, something quite refined. This dish is for those who want a traditional soba experience, for those who really want to take in the taste of buckwheat.
3Let's Try! 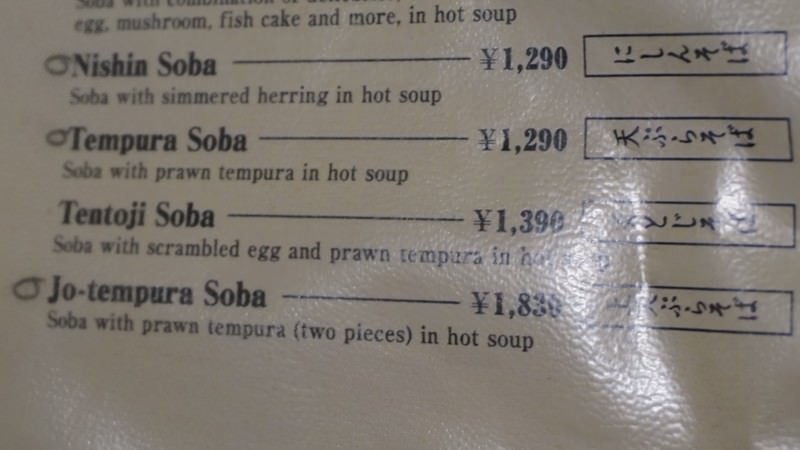 At Tagoto they also have an English menu so ordering is easy.