Due to COVID-19, some information contained in articles may be out of date. Please check with establishments directly or see their websites for up to date info.
Best Cafes in Kyoto
Sep. 01, 2020 UPDATE
tubara cafe
Traveler Friendly
Although there are no menu descriptions in English, they know basic English and will serve you kindly.
Menu
English names available
Languages spoken
Basic English
Imperial Palace & Teramachi Cafes Wagashi (Japanese Sweets)

Traveler Friendly
Although there are no menu descriptions in English, they know basic English and will serve you kindly.
Menu
English names available
Languages spoken
Basic English
Imperial Palace & Teramachi Cafes Wagashi (Japanese Sweets)
631 5 --- 0 reviews
Basic information of tubara cafe
Story & Recommendation
Rediscover Japanese sweets at veteran Japanese sweets maker Tsuruya Yoshinobu’s Cafe
tubara cafe is owned and operated by veteran Wagashi (Traditional Japanese sweets) maker "Tsuruya Yoshinobu", which is located right next door. tubara cafe opened after the wife of Tsuruya Yoshinobu’s president thought, "I want more people to learn about and enjoy the true quality of simple Japanese Wagashi sweets." As a result, the sweets offered at tubara cafe were created with the intention of retaining the quality of long-cherished Japanese sweets, while also making them easy for modern audiences to enjoy. The cafe’s interior has elements of Japanese design — such as the large window that looks out onto the garden — while also incorporating an overall theme of white, to make for a calm and modern atmosphere. Although tubara cafe is in the city, they have created a peaceful space which helps you forget the flow of time. The name, "Tubara" apparently means "To keenly follow one's heart's desires." So why not enjoy some quiet alone time with some delicious sweets at tubara cafe?
1Recommended

Sugomori (Nest set) ※W/ your choice of drink / ￥1,000(w/o tax)
These two egg-shaped Manju (Sweet bean-paste buns) come to you in a little basket, just like a birds nests. The Manju are meant to symbolize the gentle scene of a crane — known in Japan as an omen of good fortune — lovingly caring for their chicks and protecting their eggs in a nest. These tubara cafe original Manju are simple, but it is precisely that simplicity that makes them the best for enjoying the modest flavors of traditional Japanese sweets.
2Recommended

tubara tubara ※W/ your choice of drink (Matcha and Yuzu flavors are pictured) / ￥1,000(w/o tax)
These "tubara tubara" sweets come in three flavors, Matcha, Yuzu and Rum and Raisin, and of them, you can choose two. tubara cafe's original tubara tubara have a cute "tu" branded into the top of them and are deliciously moist and chewy. Apparently, tubara café has them delivered directly from where they are made so they don’t lose any of their moistness. As mascarpone cheese is kneaded into the Anko (red bean paste) inside, the tubara tubara have a similar taste to western sweets, making them perfect for those who are not big fans of red bean paste.
3Let's Try!

tubara Cookie Set / ￥900 (w/o tax)
These chic cookies are cutely bundled together like a bunch of sticks. There are three flavors of cookie, ginger, Yukari (Shiso leaf sprinkles) and sesame miso, a unique line up that usually isn’t seen anywhere else. The saltiness of the sesame miso and Yukari go superbly with the balanced sweetness of the cookies and have a taste that lingers. Enjoy these cookies with a cute "tu" logo stamped Higashi (Dry Japanese candy).
How to Order 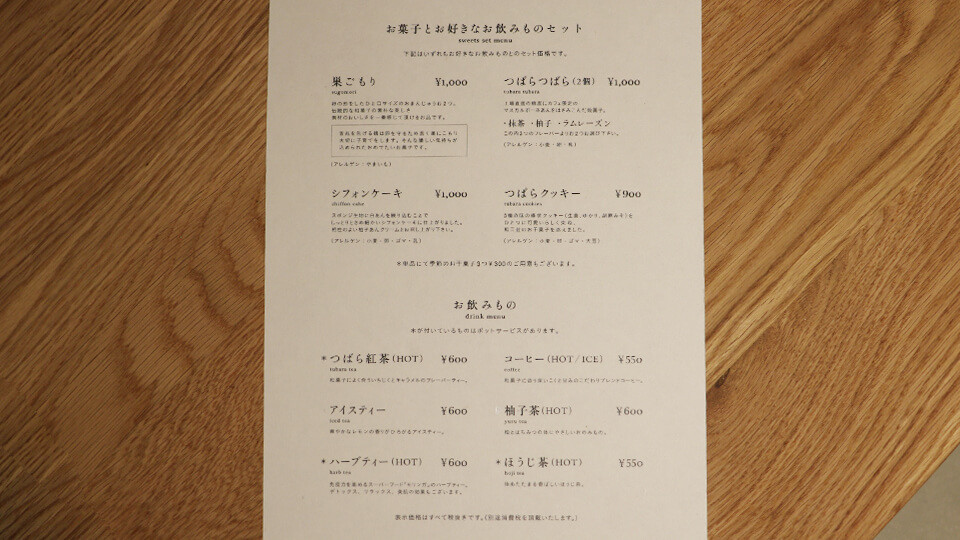 Item names are displayed also in English. Check the photos above for examples of tubara cafe’s sweets. 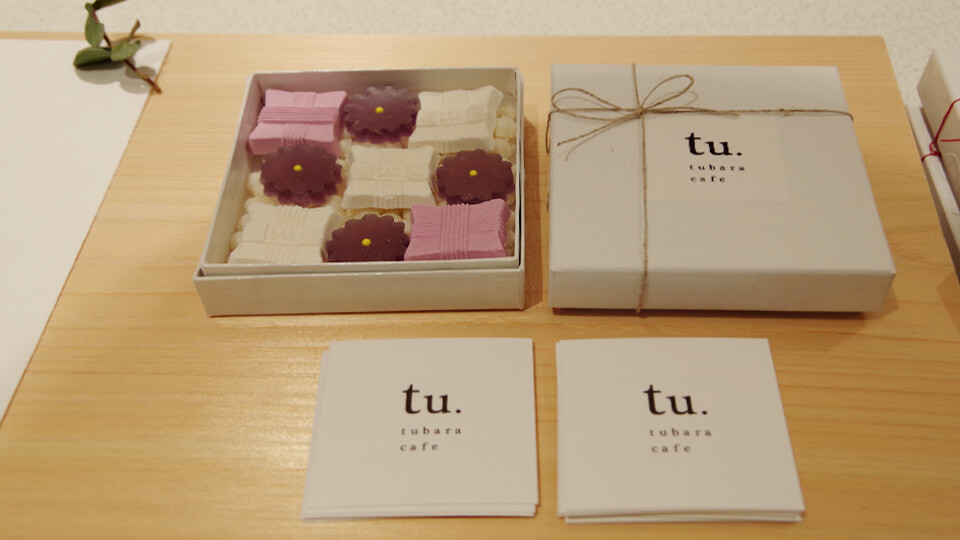 All drinks and sweets, including the above mentioned tubara tubara, can be ordered as takeout.

The packaging of the Higashi (Dry Japanese candies) have a cute and modern design, so we definitely recommend them as gifts for friends or family.