Due to COVID-19, some information contained in articles may be out of date. Please check with establishments directly or see their websites for up to date info.
December events in Kyoto
Jun. 02, 2021 UPDATE
Gojō Tōki Matsuri – Pottery Fair - 京都五条坂 陶器まつり -
Traveler Friendly
Location is convenient and close to popular sightseeing spots.
Information
Japanese
Languages spoken
Japanese
Gion & Kiyomizu Temple
PeriodAugust 7 to 10 and opens from 9 AM to 10 PM.
VenueKawabata-dori St – Gojo Higashioji-dori Ave

- 京都五条坂 陶器まつり -
Traveler Friendly
Location is convenient and close to popular sightseeing spots.
Information
Japanese
Languages spoken
Japanese
Gion & Kiyomizu Temple
91 4 --- 0 reviews
PeriodAugust 7 to 10 and opens from 9 AM to 10 PM.
VenueKawabata-dori St – Gojo Higashioji-dori Ave
Basic information of Gojō Tōki Matsuri – Pottery Fair
Story & Recommendation
The Gojo Tōki Matsuri – Your chance to find bargain pottery
Kyoto’s pottery is a treasured piece of Kyoto culture and known all around the world. The street in Kyoto known as Kiyomizuzaka, is where Japan’s famous Kiyomizu-yaki pottery originated and to this day is home to potters and their stores selling the traditional pottery. Every year the “Tōki Matsuri” pottery fair is held from August 7 to 10 and opens from 9 AM to 10 PM. With over 400 stalls being visited by nearly 400,00 people, the Tōki Matsuri is also Japan’s largest-scale pottery fair. With pottery ranging from the traditional to those created with the younger generation in mind, this fair has an abundance of different pottery to enjoy. This fair is only held once a year, so don’t miss the opportunity to head down and scour through the piles of historical Kyoto pottery to find something that’s just for you.
1Highlight

Night Time Bargain Hunting
Although many events in Kyoto only run until late evening, the Tōki Matsuri is open until 10 PM; meaning you can say foraging for deals deep into the night. Also, as there aren’t many that go this late, Toki Matsuri is also a great chance to experience an entirely different atmosphere from the other markets in Kyoto.
2Highlight

Authentic Kyoto Kiyomizu-yaki Pottery
Kyoto’s famous “Kiyomizu-yaki” pottery is defined by the number of unique and original pieces that often feature beautiful Kyoto-esque designs. Also, it’s said that Kiyomizu-yaki came to feature such designs because potters began adding gold leaf and the like in order to achieve a sense of high-class decorativeness desired by the nobles, such as the Sogun, who would visit Kyoto in ancient times.
3Let's join!

Shiga Prefecture’s Shigaraki-yaki Ware
“Shigaraki-yaki” is a form of pottery that comes from the town of Shigaraki in Shiga Prefecture’s Koka City. The pottery is also designated one of Japan’s Six Ancient Kilns. However, this style of pottery is most famous for the Tanuki ornaments it is often used in. The pottery features a natural color from the white powder used and gives off a cool, calm, and relaxed air. We especially recommend Shigaraki-yaki’s antique plates to be used with Italian food and desserts, to bring some style to your dinner table.
4Let's join!

Saga Prefecture’s Arita-yaki Porcelain
Arita-yaki is a form of Japanese porcelain primarily from the Saga Prefecture town of Arita. Compared with other potteries, porcelain is known for its relative toughness and strength. Each carefully hand-painted by artisans, another characteristic of Arita-yaki is its colorful and finely detailed designs. Some designs feature just the right amount of gaudiness, making them great as everyday plates which help make any dish look even better.
- Manner & Tips - 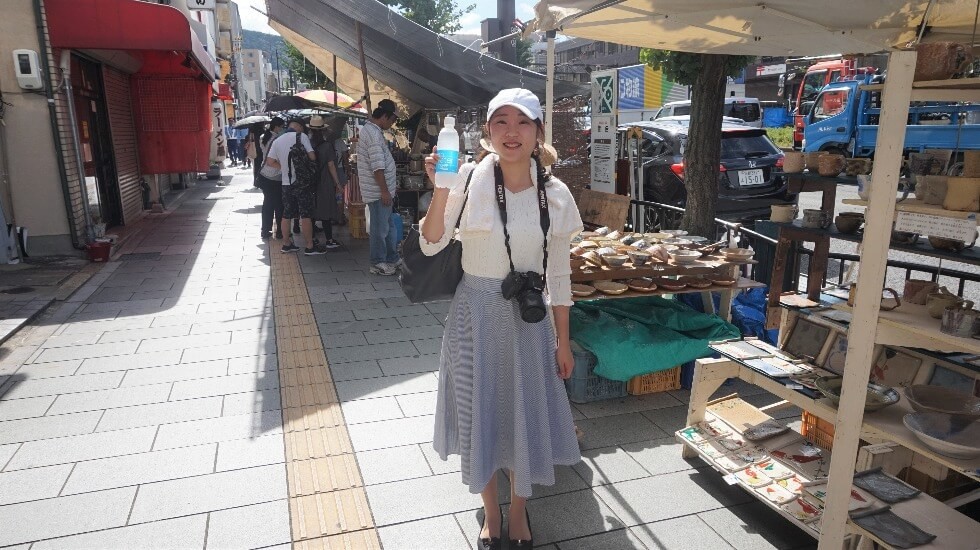 As the Toki Matsuri is held during the hot summer month of August and doesn’t offer much shade around the stalls, we highly suggest taking sunscreen, a hat and something to drink. There are also quite a few people, so avoid using any sun umbrellas.

In regards to payments, many of the stalls only accept cash, so make sure to prepare some cash in advance.