- 比叡山延暦寺 -
Traveler Friendly
They have pamphlets in English, Chinese, and Korean. They also offer audio guides for ￥500.
Information
Pamphlets and website in English and traditional Chinese.
Languages spoken
Some simple English
Kurama & Kibune Temples & Shrines
573 5 --- 0 reviews
Basic information of Hieizan Enryaku-ji Temple
Story & Recommendation
The head temple of the Tendai sect! The mother mountain of Japanese Buddhism, Hieizan Enryaku-ji
Hieizan Enryaku-ji Temple is on the 848 meter tall Mt. Hiei, and it’s the head temple of the Tendai sect of Buddhism. Saicho, a Buddhist monk, started a temple on this mountain in 788, so this temple boasts over 1200 years of history. This place is respected as the “mother mountain of Japanese Buddhism” where most of the founders of Japanese Buddhist sects have studied and practiced Buddhism before starting their own schools of it. It was also recognized as a UNESCO World Heritage Site in 1994. The area of the temple is vast at over 1,500 hectares. The temple is divided into three areas, To-do, Sai-to, and Yokawa, and you can traverse these areas by taking a shuttle bus (one-day ticket 1,000 yen with entrance to the temple, children 500 yen, Suica, Pasmo, and Icoca also accepted). Each of these areas has many things worth seeing, so if you have time, I recommend visiting them all. Saicho, the founder of Enryaku-ji, has left us a saying, “Brighten the world at your corner.” This saying means that each one of should do his or her best in their position and that each one of us should strive to be a nation’s treasure. You can see these words written in Japanese at many places in the temple, and they make you feel like you should do your best in the position you’re right now. If you visit Enryaku-ji, I hope that you will take note of Saicho’s words. Enryaku-ji Temple is in the mountains surrounded by quiet nature, and it’s a valuable place for learning more about Buddhism, so I hope you will all visit it.
1Highlight

To-do area *Partially under construction
To-do area is the place where the temple first began, and in the middle of it you can find Konpon Chudo. Konpon Chudo is the main main hall of the temple (each area of the temple has its own main hall), but in the To-do area you can also find many other important temple buildings such as Daiko-do, where the founders of many sects are enshrined, and Amida-do, where prayers for the ancestors are performed. The Yakushi Nyorai (Medicine Buddha) statue enshrined in the main hall was carved by Saicho himself, and in front of it there is the inextinguishable Dharma Lamp, which has been burning for 1200 years. This fire is kept burning by rapeseed oil which has to be added to it regularly. If the people in charge of doing this are not careful, the fire may go out. This gave born to the well-known Japanese saying, “yudan taiteki,” which means that carelessness is very dangerous. The Dharma Lamp and Yakushi Nyorai statue are on the eye-level of the worshippers visiting the main hall: this is intentional. This represents the teaching of Butsubon Ichinyo, which means that each one of us, no matter what kind of a person we are, holds a part of the nature of Buddha inside us. Konpon Chudo is a place where the worshipper ties a link with him or herself and Yakushi Nyorai and passes on his or her heart’s wishes. On the ceiling of the main hall you can see many kinds of beautiful flower paintings, so look up when you visit.
2Highlight

Sai-to area
The main hall of Sai-to area is Shaka-do which can be found in the center of this area. The official name of Shaka-do is Tenporin-do, and it’s the oldest hall of Enryaku-ji. The statue enshrined at Tenporin-do is Shakamuni Nyorai carved by Saicho, which can also be seen in the name this hall is usually known by, Shaka-do. The hall you can see in the above picture is of Jogyo-do and Hokke-do (both Important Cultural Properties), and which are joined together by a walkway, and known together as Ninai-do Hall. The reason for why this hall is called Ninai-do is that in Japanese, ninai means to carry, and this building is said to have been carried here by the heroic retainer of Minamoto no Yoshitsune, the warrior monk Benkei, who took a hold of the building by the walkway and carried it up the mountain. There is a distinct, stately beauty to the building as it stands there in quiet surrounded by mossy ground. This area is also the place of Saicho’s grave which is in Jodo-in Hall. From To-do area: 5 minutes by bus, 20-minute walk (path not paved, hilly, and with stairs). From Yokawa area a 10-minute shuttle bus ride.
3Good Experiences

Yokawa area
The Yokawa area is the most northern of the areas of Enryaku-ji, and it’s cool in summer and surrounded with calmness. The main hall of the Yokawa area is the Yokawa Chu-do Hall which is made in the butai-zukuri-style and this hall’s specialty is that it almost looks like a ship when seen from the front. Butai-zukuri, also called kake-zukuri, means that the building is built on sloping land or close to ponds, and then joined to the ground with pillars and nuki (Japanese style of carpentry connection), which then support the underfloor space. Kiyomizu Temple is the other famous temple known for this building style. The way the pillars supporting this structure are accurately constructed is beautiful. I recommend that you don’t enter the main hall right away, but take a moment to appreciate the view from below. If you’re not careful you may not notice it all, so pay attention. From To-do area: 15 minutes by bus, over one hour and 40 minutes if you walk (Tokai Nature Trail). From Sai-to area a 10-minute bus ride.
4Good Experiences

Bonji café latte and bonji matcha latte / ￥700
You can enjoy these drinks at the café “Kissa Reiho” which is Enryakuji Kaikan, in To-do area. . The taste of the foamy crèma on top of these lattes is silky soft and delicious, but note the mysterious letters on top of the crema. This is a thing known as “bonji,” which is important in Buddhism, but especially in the esoteric type of Buddhism Saicho and Kukai brought to Japan from China. Each person has a guardian Buddha of the year they were born, and this is represented by the bonji, and things that have that bonji on them are considered to bring the blessing of Buddha and protect from calamities. The ancient system of twelve Earthly Branches was brought to Japan from China, and at this café, they have a calendar chart with the years and which Earthly Branch those years represent, so you can check this chart to find your own Earthly Branch. If you can’t find your own Earthly Branch, you can ask the staff. The only place where you can enjoy a drink while you think of your guardian Buddha is Hieizan Enryaku-ji. Enjoy the drink while looking out of the windows at Lake Biwa.
- Manner & Tips - 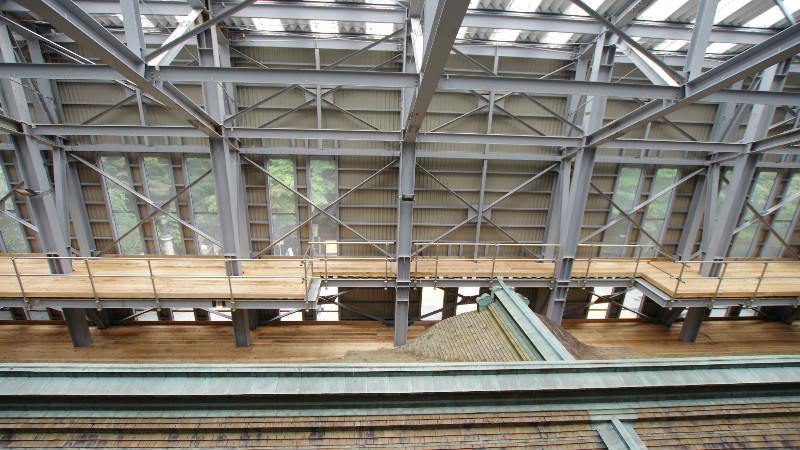 Like this picture, which was taken by going upstairs and taking a photo from a stage. Under you, you can see the walkway of Konpon Chudo. Normally you cannot see this spectacular view; it’s something you only get to see during the renovation works. You also get to see the copperplates of the roof closer than normal, and enjoy a different kind of temple visit.

Basic information of Hieizan Enryaku-ji Temple
Phone
--
Address
4220 Sakamotohonmachi, Otsu City, Shiga Prefecture
Directions
How to get to To-do area: *You can use the shuttle bus to get to Sai-to and Yokawa areas. (One-day pass for the shuttle bus including entrance to the temple is 1000 yen for adults and 500 yen for children, but IC cards like Icoca, Suica, and Pasmo are also accepted.) *The shuttle buses do not run in winter from the second Monday of December to the middle of March. By bus: JR Kyoto Station to Enryakuji Bus Center Take Kyoto Bus #51 or Keihan Bus #57. Time: Around one hour + the time it takes to wait for the bus. *The bus only runs about four times a day, mainly in the morning, and doesn’t operate from the second Monday of December to the middle of March. This way you get to go to Enryaku-ji Temple by taking just one bus so this is the recommended way for those going to the temple for the first time. If you want to see the To-do area, I recommend getting off at Enryakuji Bus Center or To-do bus stop. Bus stop close to Konpon Chudo and Kokuhoden: Enryakuji Bus Center Bus stop close to Amida-do and Kaidan-in: To-do bus stop By train, cable car, ropeway, and bus: JR Kyoto Station – JR Tofukuji Station – Keihan Shichijo Station – Keihan Demachiyanagi Station – Eizan Hieizanguchi Station – Cable Yase Station – Cable Hiei Station – Ropeway Hiei Station – Hiei Sancho Station – Enryakuji Bus Center *The cable car and ropeway do not operate in winter from the second Monday of December to the middle of March. Time: Around one hour + the time you wait for the next train or bus This way of going to the temple is a bit complicated, but you get to ride on the sightseeing train Hiei, cable car, and ropeway, so you get to see the beautiful nature of the mountains. This is the recommended way of going to the temple for those who like different methods of public transport and those who like mountains and nature.
Highest Rated Temples & Shrines
Shimogamo Shrine
Shimogamo Shrine & Kitayama
Temples & Shrines
9.3 10 reviews
Fushimi Inari Taisha Shrine
Fushimi Inari
Temples & Shrines
9.1 10 reviews
Kiyomizu-dera Temple
Gion & Kiyomizu Temple
Temples & Shrines
9.1 3 reviews
Nanzen-ji Temple
Nanzenji Temple & Ginkakuji Temple
Temples & Shrines
8.8 2 reviews
Ninna-ji Temple
Kinkakuji & Uzumasa
Temples & Shrines
8.8 2 reviews
Discover More Temples & Shrines
Share
Write Review
×
Share
Share
Tweet