Due to COVID-19, some information contained in articles may be out of date. Please check with establishments directly or see their websites for up to date info.
Best Food Souvenirs in Kyoto
Aug. 28, 2020 UPDATE
Crochet – Kyoto Flagship Store
Traveler Friendly
The staff can give explanations in basic English. While names are written in English, if you’re unsure what a flavor might taste like, feel free to ask to try it.
Information
English
Languages spoken
Basic English
Downtown Food Souvenirs

Traveler Friendly
The staff can give explanations in basic English. While names are written in English, if you’re unsure what a flavor might taste like, feel free to ask to try it.
Information
English
Languages spoken
Basic English
Downtown Food Souvenirs
1907 21 --- 0 reviews
Basic information of Crochet – Kyoto Flagship Store
Story & Recommendation
Kyoto Candy Crochet – A Novel Fusion of Kyoto Traditions and European Beauty
Crochet is a chic candy shop owned by an over 140-year-old confectioner that specializes in a traditional Kyoto candy known as Kyo-ame. Including those sold in their flagship store, all of Crochet’s “Kyo-ame” are made in their downtown Kyoto candy factory. While preserving the recipes and techniques handed down to them, Crochet makes their candy 100% by hand, giving them a “texture” and “flavor” that's simply not there in more commercially made ones. Crochet’s line of Kyo-ame candy is the result of a desire to bring together the techniques of beautiful European sweets and those that bring to life Japan’s unique flavors. It’s thanks to this marriage that Crochet's beautiful, great-tasting, and one of a kind Kyo-ame were born. Every flavor in Crochet’s line up of Kyo-ame features a different color, each with its own meaning. Crochet paid attention to the fact that people's thoughts, feelings and wishes have been expressed through color since ancient times. So, by giving each flavor its own color with a special meaning, Crochet, in turn, gives its candy their own unique stories. While the line up of unique colors and unusual names, such as "Hana Asagi" and "Maillot jaune," make choosing the candies exciting, the stories behind each of the candies gives them an added layer of allure. Of course, while you're able to buy each flavor individually, if you're thinking of getting a few for different people, then you can save a bit by getting them in sets of two, three or six. Also, Crochet sometimes sells limited-run seasonal Kyo-ame as well, so make sure to keep an eye out for them too.
1Recommend!

Koicha Temari – Matcha / Small: ￥388 (inc. tax)/Large: ￥648 (inc. tax)
Using the same "temari" design as the Shiraginu Temari, these are the matcha flavored Koicha Temari. While these candies are matcha flavored, they're not your regular matcha. They're "koicha" flavored. Koicha is a concentrated version of matcha that has a stronger flavor and aroma than the more widely known version of matcha, usucha, which requires only a small amount of matcha powder to make. This Koicha Temari gives you a taste of unique flavors of koicha green tea, which is often considered to be the less bitter, more sweeter, the better quality. If you're looking for a matcha candy with stronger, more pronounced flavors than regular matcha flavored candy, then we highly recommend the Koicha Temari.
3Check it out!

Suou – Red Bean / Small: ￥388 (inc. tax)/Large: ￥648 (inc. tax)
The beautiful, bright red Suou are a limited-run Kyo-ame that are only sold at Crochet’s flagship store. The Japanese word "suou" refers to a layered color of black on red. The suou color can be found on the kimono of Heian period Japanese nobility and is considered high class. Additionally, around the time when tea ceremonies began gaining popularity with samurai, the somber, elegant feel of the color came to express the Japanese concept of wabi-sabi. In addition to featuring a color linked to Japanese culture, the Suou Kyo-ame also features a rather Japanese flavor, red bean. So if you love Japanese red bean flavored things, then you might really like this flavor.
4Check it out!

Les Parapluies de Cherbourg – Yogurt / Small: ￥388 (inc. tax)/Large: ￥648 (inc. tax)
Marked by a bold, eye-catching pink and light blue color palette, the Les Parapluies de Cherbourg are another limited run Kyo-ame exclusive to the Crochet Kyoto flagship store. Based on the dress Catherine Deneuve worn in the French film “Les Parapluies de Cherbourg” (Eng: The Umbrellas of Cherbourg), these Kyo-ame utilize a gorgeous, chic color palate to bring about images of the film. The flavor is a slightly uncommon yogurt flavor. The inspiration from The Umbrellas of Cherbourg gives these candies a whole other dimension when you keep in mind the lovely yet heart-wrenching story of the two lovers in the film while enjoying the candy’s sweet, yet somewhat unusual flavors.
How to buy 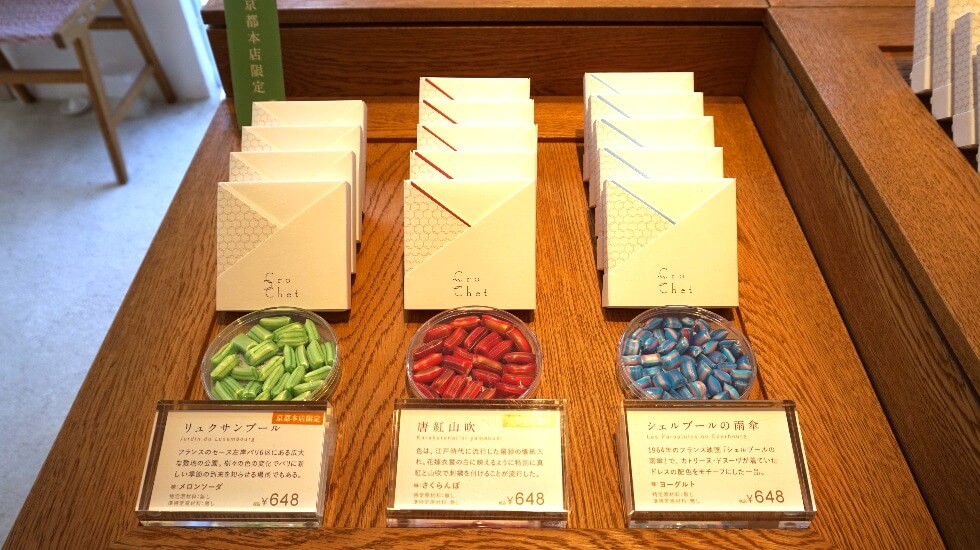 Crochet’s Kyoto flagship store doesn’t offer any information on flavors in English, so ask the staff if you find one that piques your interest. They will be sure to answer as best as they can in English.

Also, at this flagship store, you can sample every flavor, so if you’re unsure what one might taste like or not sure what to buy, then give them a try!

*As Crochet uses artificial colors in their products, some may turn the inside of your mouth the same color. However, you can rest easy as everything contains less than 0.005% and is in line with the Japanese government’s safety standards so won’t affect your body in any way. 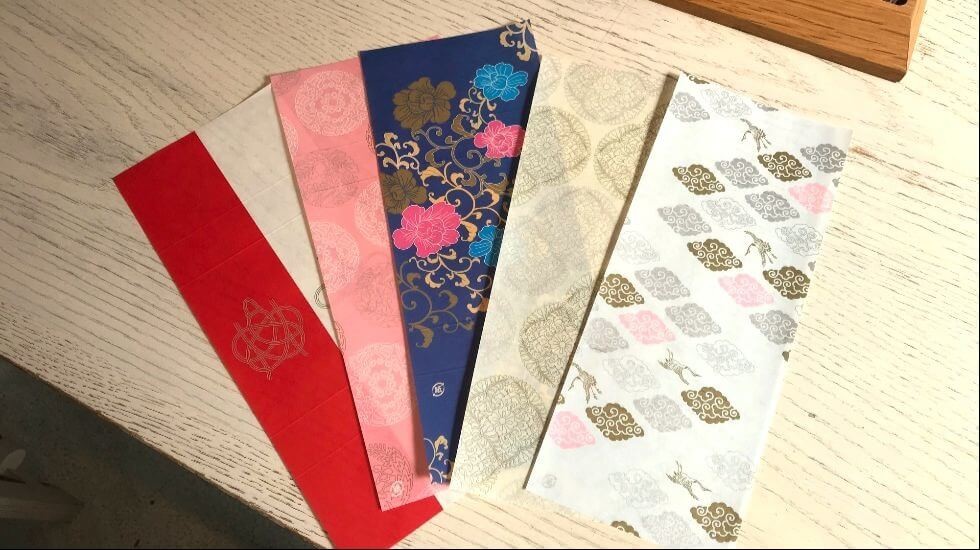 Crochet are also very particular about what they wrap their candy in.

When you buy the candies in sets, they'll wrap them in beautiful Kyoto-esque traditional Japanese wrapping paper.
All of the wrapping paper is magnificent and makes your candy just that much more wonderful.
Crochet offers this wrapping for free, so if you're buying something as a gift for friends, family or someone special in your life, then ask the staff and they'll gladly wrap it for you.
As a side note, you can choose the wrapping paper, which means you can pick the one you think best suits the person you're giving the candy to.

Crochet will also add a mizuhiki paper ribbon on wrapping paper or envelops for ¥55 (inc. tax) or ¥110 (inc. tax). With ribbons coming in incredibly cute designs like hearts and butterflies, they instantly add an extra air of brilliance to whatever they're attached to. So if you're planning on giving Crochet's candies as a gift for a special occasion, then the simple addition of one of these ribbons is a sure-fire way to make the person that much happier.