Due to COVID-19, some information contained in articles may be out of date. Please check with establishments directly or see their websites for up to date info.
Best Food Souvenirs in Kyoto
Aug. 12, 2020 UPDATE
Murakami Kaishindo - 村上開新堂 -
Traveler Friendly
The shop’s employees speak only simple English, but will use gestures to communicate with you properly.
Information
Japanese only
Languages spoken
Basic English
Imperial Palace & Teramachi Food Souvenirs

- 村上開新堂 -
Traveler Friendly
The shop’s employees speak only simple English, but will use gestures to communicate with you properly.
Information
Japanese only
Languages spoken
Basic English
Imperial Palace & Teramachi Food Souvenirs
1822 18 --- 0 reviews
Basic information of Murakami Kaishindo
Story & Recommendation
The “Russian cakes” of Kyoto's oldest sweet shop will give you a taste of true confectionery nostalgia
Murakami Kaishindo, established in 1907, is the oldest sweet shop in all of Kyoto. The shop makes its home between the many antique and handmade goods stores that enliven Teramachi Street. The entire street has a nostalgic and retro feeling to it, but even in this atmosphere, Murakami Kaishindo is special. It is truly “Kyoto’s sweet shop,” beloved by the city’s inhabitants for generations. Countless people from Kyoto have grown up with the simple and tender taste of Murakami Kaishindo’s sweets, a taste that has remained unchanged since the store’s founding. The hands of the confectionery makers infuse each treat with a unique care and warmth, comforting anyone who eats them. That is why Murakami Kaishindo has remained so well-loved for so many years. When all is said and done, however, Murakami Kaishindo’s most famous products are the cookies called “Russian cakes” in Japanese. These have become all but synonymous with Murakami Kaishindo, especially since the store has been making them since the time of its founding. The soft cookies are characterized by a fine texture and gentle sweetness. In recent years, Kyoto’s most beloved sweet shop has been experimenting with new kinds of cookies. Murakami Kaishindo is always evolving: the store is now selling Teramachi Vanilla Pudding and madeleines, its first new products in 35 years, and will be making use of the Japanese-style space behind the store to open a café next year. Murakami Kaishindo is a true Kyoto mainstay that continues to try new things while scrupulously preserving its roots in tradition. Kyoto is more than traditional Japanese confectionery and matcha. These sweets, long beloved by the city’s inhabitants, have their own special Kyoto charm.
1Recommend!

Teramachi Vanilla Pudding / 1 ￥460 (+ tax) | 2 ￥1,000 (+ tax) | 3 ￥1,480 (+ tax)
“Teramachi Vanilla Pudding,” the store’s first new product in 35 years, was developed by fourth-generation store owner Shōichi Murakami. Ample amounts of fresh cream are left to simmer during the pudding’s preparation, giving it a velvety smooth taste. The caramel at the bottom is bittersweet, perfectly complementing the thick, sweet pudding. The puddings are sold separately, each in its own dedicated little bag (visible in the background of photo of the pudding). When the waxed string is pulled tight, the bag becomes a small and well-formed pouch that makes an ideal little present. Teramachi Vanilla Pudding is a new concept that truly appeals to the five senses: it not only smells and tastes, but also looks delicious. A highly recommended product.
3Check it out!

Dacquoise / ￥210 (+tax)
Another one of Murakami Kaishindo’s new products, 35 years in the making, are its dacquoises. These baked cookies with almond-flavored meringue originate from France. However, the small dacquoises shown in the picture are actually a Japanese product. This cookie was created by a Japanese chef who had studied in France, and who decided to put dacquoises next to Japanese “monaka” cakes and create something new. As you can see, the outside is crisp, but take a bite and the texture turns to luxurious sponge cake in your mouth. A layer of bittersweet caramel sauce in the middle gives these cookies a sophisticated flavor. These dacquoises are also very affordable; one can be had for ¥190.
How to buy 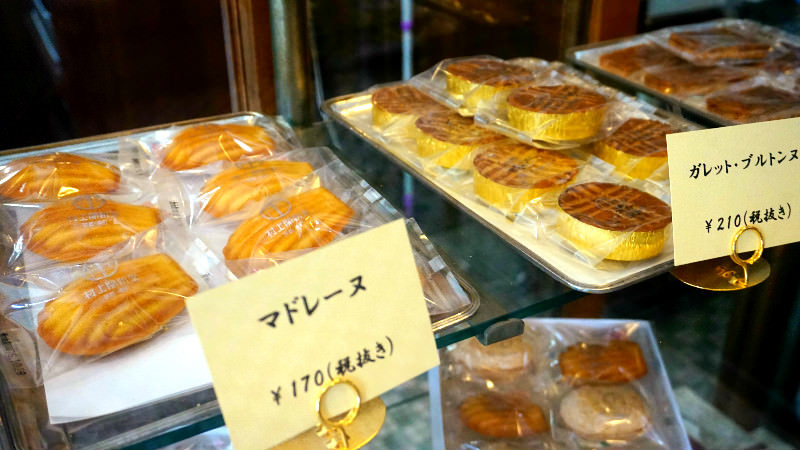 Murakami Kaishindo offers not only traditional Western-style confectionery that it has been making since the time of its founding, such as Russian cakes and orange jelly, but also new Western-style cookies. Most are sold per piece, so you can buy one of each to try them out. You should definitely try one of the new products alongside staples like the Russian cakes. 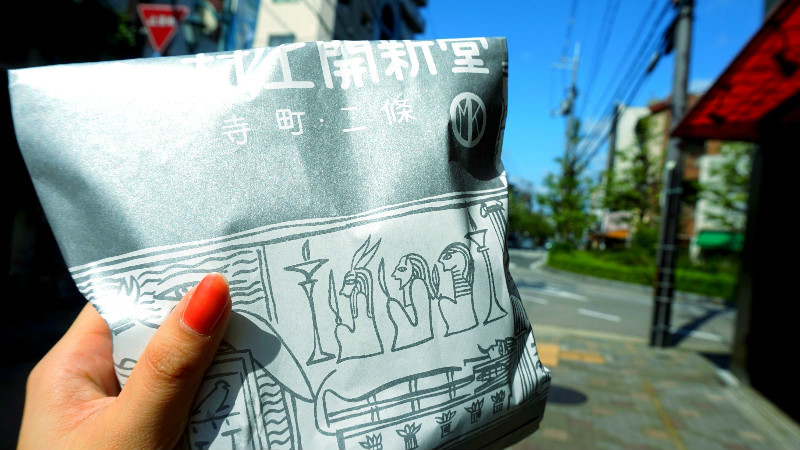 Murakami Kaishindo’s bags have a distinctive, mysterious pattern reminiscent of ancient Egypt. The silvery gray, shiny wrapping paper has a luxurious feel to it, but the whimsical pattern on it makes the whole look very rewarding. The wrapping paper is so unique that you will want to take a picture of the bag.